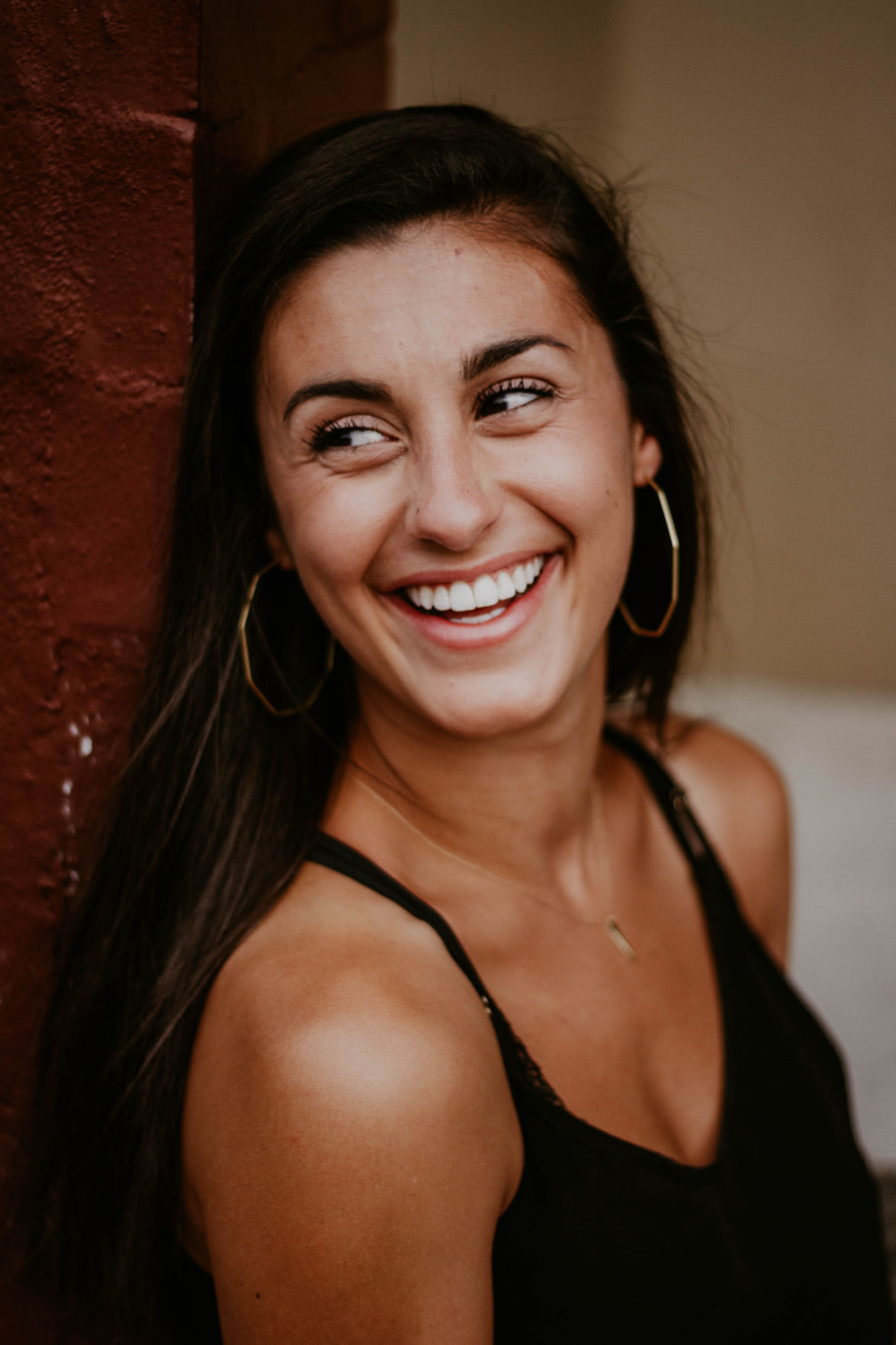 Logan Saad, 18, who is scheduled to address fellow graduates at The Oakwood School today, was accepted into musical theater programs at five prestigious schools. 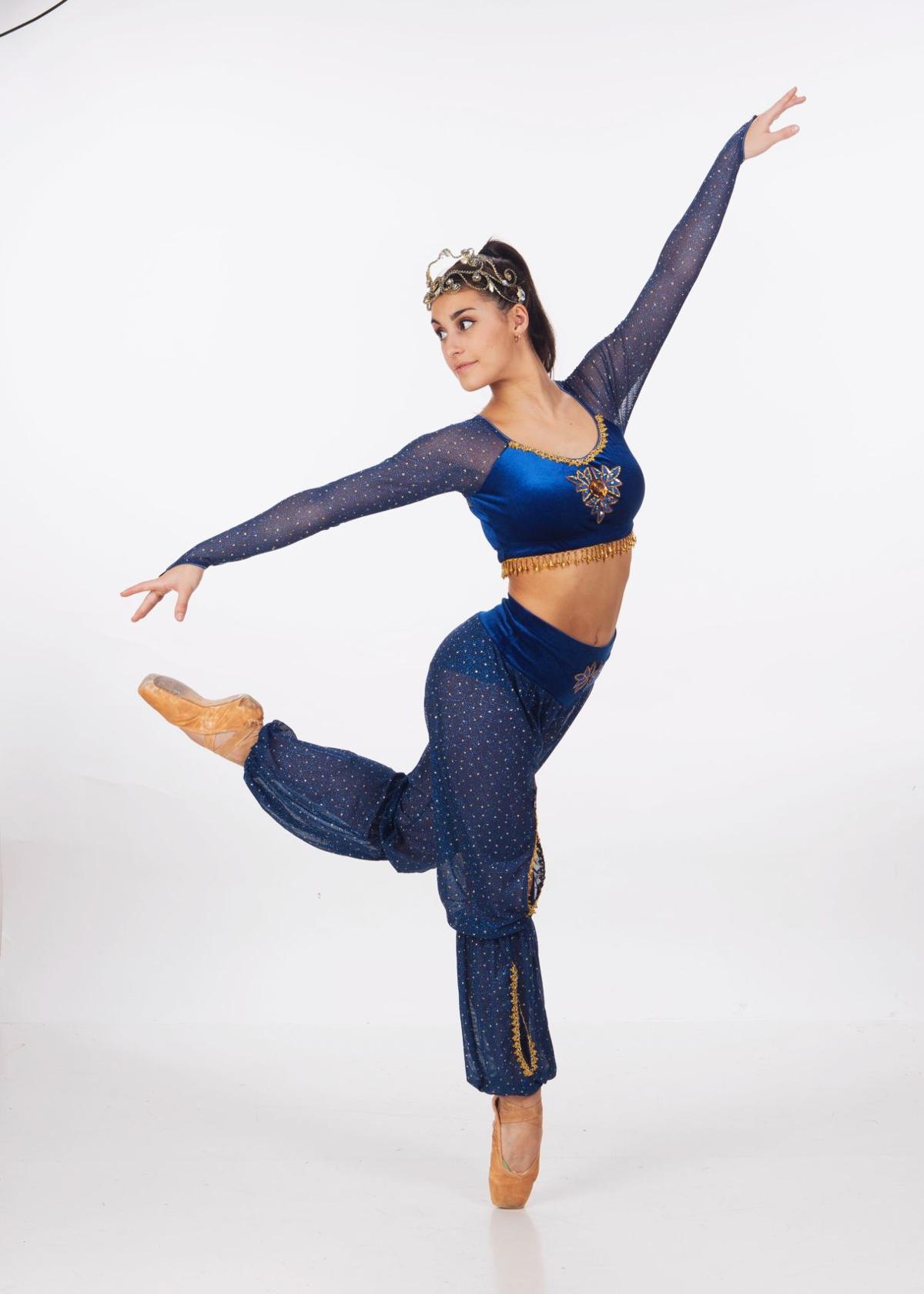 Logan Saad, who has been dancing since age 5, rehearses for “Aladdin,” which she performed in January with Greenville Civic Ballet. 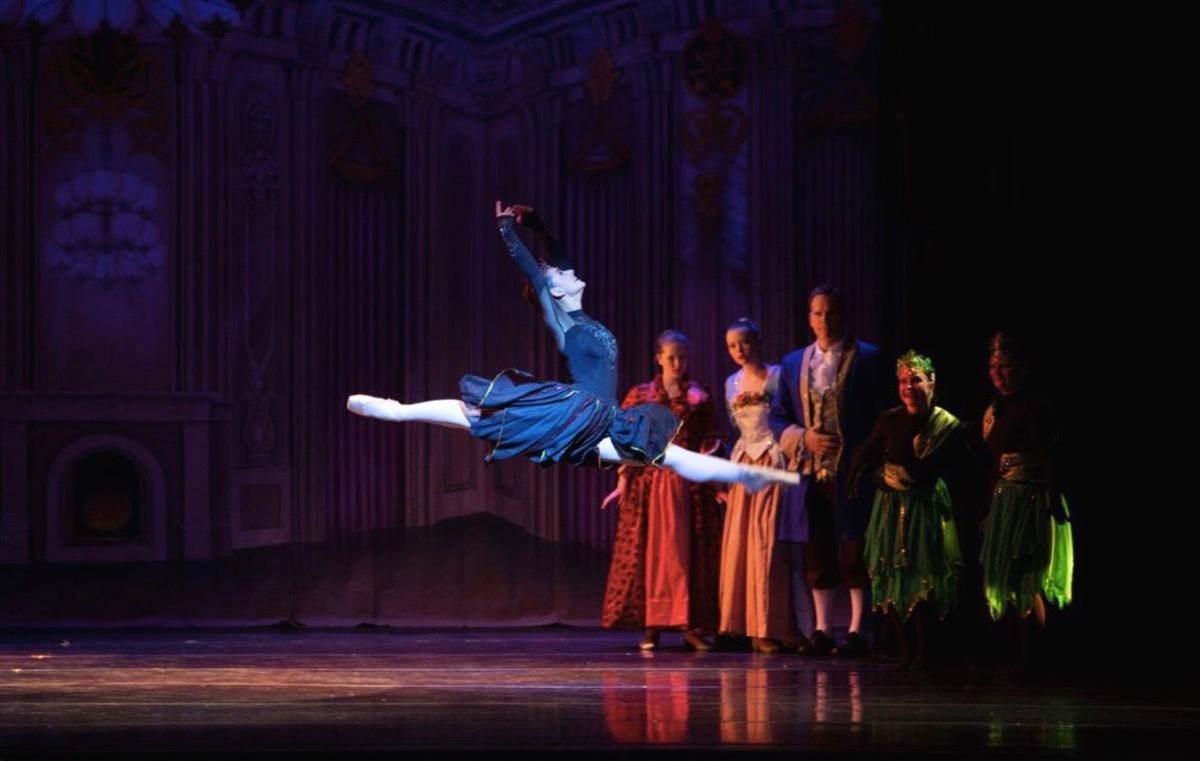 Logan Saad performs on stage in Wright Auditorium."Performance experiences and opportunities are almost my addiction," she said. 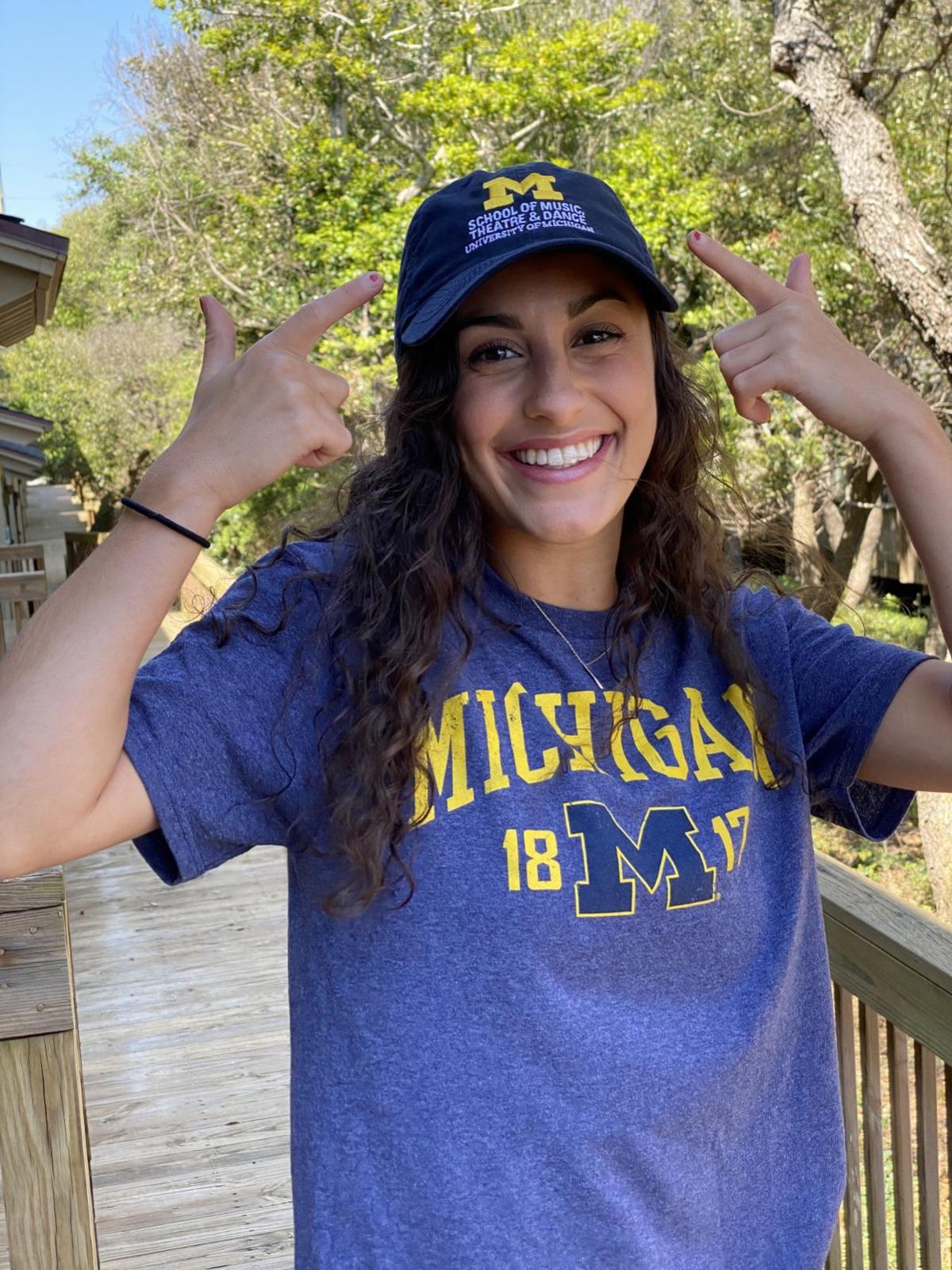 Logan Saad chose the University of Michigan after being accepted into five musical theater programs. “It’s hard to fathom all the opportunities that I’ve been given,” she said. “I’m so grateful for them.”

Logan Saad, 18, who is scheduled to address fellow graduates at The Oakwood School today, was accepted into musical theater programs at five prestigious schools.

Logan Saad, who has been dancing since age 5, rehearses for “Aladdin,” which she performed in January with Greenville Civic Ballet.

Logan Saad performs on stage in Wright Auditorium."Performance experiences and opportunities are almost my addiction," she said.

Logan Saad chose the University of Michigan after being accepted into five musical theater programs. “It’s hard to fathom all the opportunities that I’ve been given,” she said. “I’m so grateful for them.”

The coronavirus is not what stopped Logan Saad from taking center stage at The Oakwood School on Friday. It was the rain. Today, due to the pandemic, this student body president will get her shot in front of a limited graduation audience of students and their immediate families.

But by August, the Greenville native will be moving on to a much bigger stage. Logan, 18, is one of about two dozen students selected for University of Michigan’s prestigious musical theater program. The school, whose graduates include Madonna, James Earl Jones, Lucy Liu, Gavin Creel and the Grammy and Golden Globe-winning songwriting team Benj Paske and Justin Paul, picked 10 women and 13 men from more than 2,000 who submitted audition tapes.

Michigan is one of five highly rated theater schools in the country to invite Logan to be a part of the Class of 2024. She turned down offers from Penn State, New York’s Pace University and Boston Conservatory.

“Getting into as many top programs as she did is unique,” said Harrell, who has been working with Logan since 2018. “(It’s like) Logan’s choosing between Harvard, Yale and Columbia. It’s the kid who got into all the Ivy Leagues and is now (saying), ‘Which Ivy League is best for me?’”

For Logan, who dreamed since childhood of going to school in New York and who spent two summers studying at Boston Conservatory, it was not an easy decision.

“I wasn’t even planning on auditioning for the University of Michigan because it’s the top musical theater school in the country,” she said. “I was not very confident at the beginning of this process because of my lack of acting training and lack of vocal training. I’ve had voice teachers and trained but a lot of the kids I was auditioning with, it was nowhere compared to their training.”

Logan’s dance talent was a given. Her mother, Kimberly Gray-Saad, is owner and artistic director of Greenville Civic Ballet, where Logan has been enrolled in classes for 13 of her 18 years.

“My mom was teaching when she was pregnant, so I was in the studio pre-birth,” she said, laughing.

Logan, who in early childhood divided her time between dance and soccer, which her father, George, coached, made the decision around age 12 to devote herself fully to dance. She not only studied ballet but jazz, tap, hip-hop and modern.

Cherita Lytle, studio manager and lead instructor for Greenville Civic Ballet, remembers having her in the studio from the time she was a toddler. By the time Logan was 5, Lytle was her dance teacher.

“You see that potential in all your dancers; every dancer has got their own little spark,” Lytle said. “You see the spark, but with her you kind of felt the spark — even at a young age.”

What surprised Lytle, who also serves as fine arts department chair and dance instructor at Oakwood, was not that Logan would go on to become one of the school dance team captains. It was that she also was a gifted vocalist.

Hearing her then sixth-grade dance student sing at a school talent show, Lytle recalls, “I stopped and really turned my head.”

Logan’s chorus teacher had seen the child’s potential in fourth grade and recommended that she might want to consider honing her talent with voice lessons.

What swayed her was the idea of performing a solo. At the time, it was something that dance had not given her. All her ballet recital performances up to that point had been as part of an ensemble.

“I wanted be the soloist so I could have the microphone,” Logan said. “I was just super attracted to being the center of attention.

“It was a different type of performance. It wasn’t so much going on on stage (as in dance),” Logan said. “It was just somebody singing and people listened, and it was a different experience.”

She went on to be cast in a number of school musicals, including “The Sound of Music,” “Footloose” and “Bye Bye Birdie.” But a chance to perform “Bye Bye Blackbird” during a summer program at Boston Conservatory changed her course.

Up to that point, Logan had assumed that when she went off to college, she would major in dance. But after being selected for a role in which she could sing and dance, she wanted more.

“That was the first time that I felt like I wasn’t just a dancer,” Logan said. “It’s so strange to think about because I really do feel like that experience shaped my view of myself and what I wanted to do.

“I love performing,” she said. “I love being on stage, and I love feeding off the audience’s energy. It’s a thrill I can get nowhere else.”

Though she was just 16 and an accomplished dancer at the time, Logan was considered a latecomer in terms of vocal and acting training.

“Some kids have been singing as long as Logan has been dancing,” Harrell said. “Logan just came to the singing side of musical theater a little bit later than most people do.

What enabled her to catch up? Harrell calls it the “X-factor.”

She had enough of it that at age 17, she got a callback at her first Broadway audition, a confidence-booster that might have made some performers reconsider going to school for four more years. But Logan was determined to have the college experience she had planned.

Still, she hopes to end up in New York after her college graduation, pursuing dream roles onstage.

“I’ve heard her say she wants to be on Broadway,” said Lytle, adding that Logan’s first New York auditions show that’s not unrealistic. “I think she’s going to be unstoppable.”

After a disrupted school year and looming uncertainty, graduation ceremonies have started at Pitt County high schools, albeit differently from years past.

Rainy weather forced The Oakwood School to move its outdoor ceremony from Friday to today. The event is limited to immediate family and is being held on the athletic field to promote safe distancing.

The outdoor ceremonies will continue through June 8-9 at each school's football field with time built in for rain dates. The events are strictly limited to two guest per student.

A schedule of the event and a frequently asked questions sheet published by the schools is on Page H5 in today's graduation section. Schools will be streaming ceremonies for family, friends and the public to participate.