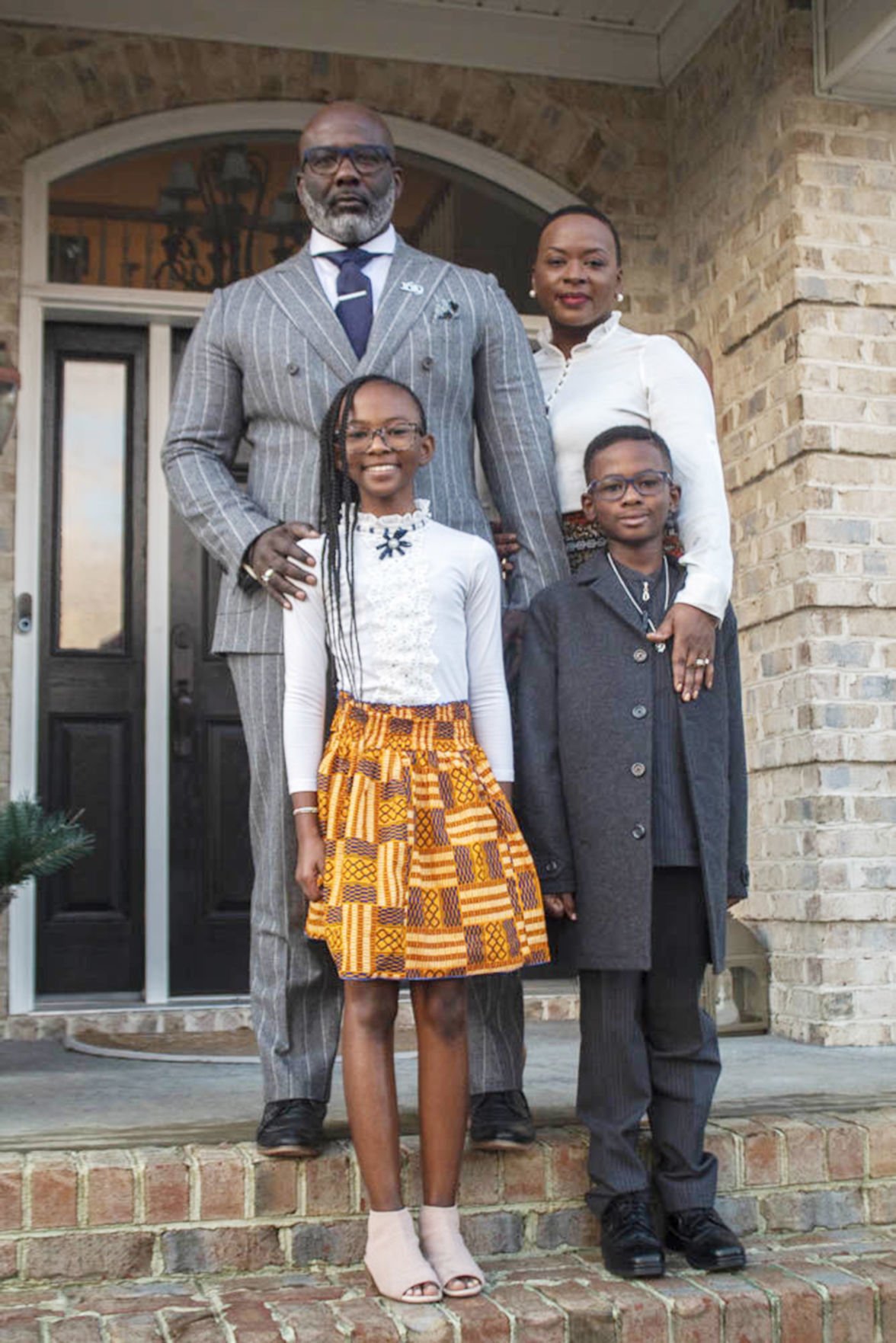 G. Todd and Diane Taylor of Taylor Made Publishing along with their children, Morgan and Garrett, who inspire and sometimes collaborate on the children’s books. “It just became more and more difficult to find books that reflected who they were, and so we made them,” Diane said. 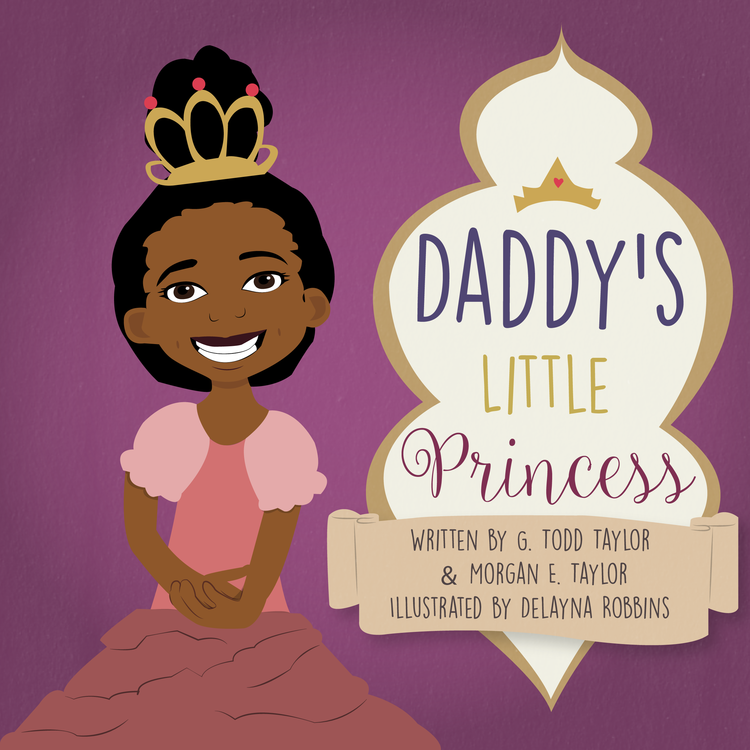 Morgan Taylor, now 10, wrote “Daddy’s Little Princess” with her father, G. Todd Taylor, when she was 6. 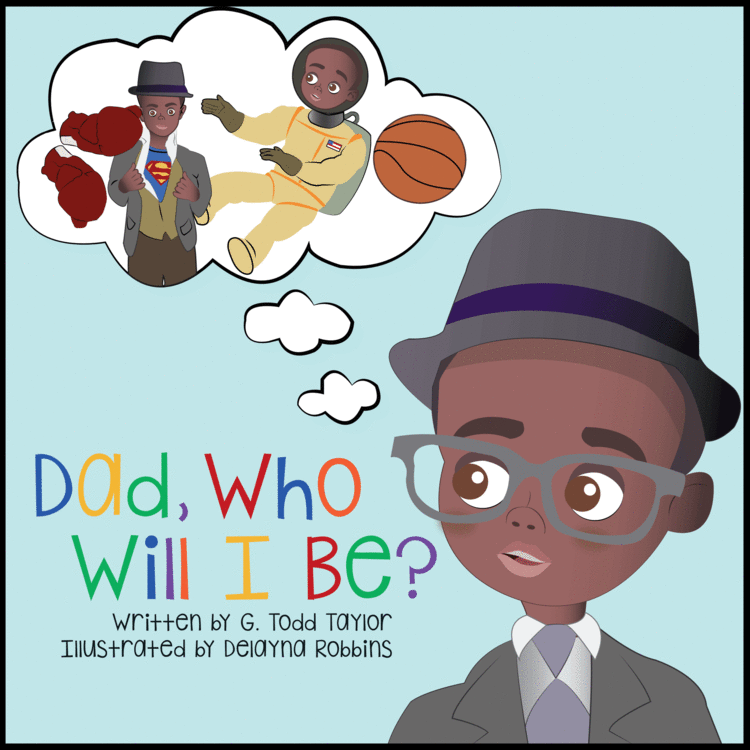 “Dad Who Will I Be?” by G. Todd Taylor. Taylor is working on a book with his son Garrett, 8, which will be published this year.

G. Todd and Diane Taylor of Taylor Made Publishing along with their children, Morgan and Garrett, who inspire and sometimes collaborate on the children’s books. “It just became more and more difficult to find books that reflected who they were, and so we made them,” Diane said.

Morgan Taylor, now 10, wrote “Daddy’s Little Princess” with her father, G. Todd Taylor, when she was 6.

“Dad Who Will I Be?” by G. Todd Taylor. Taylor is working on a book with his son Garrett, 8, which will be published this year.

When young Morgan Taylor told her parents that she couldn’t be a princess because there were no princesses that looked like her, they knew it was up to them to set the tone for how their daughter would learn to view herself.

Diane and Garrett (G. Todd) Taylor thought that seeing princesses and queens of different hues in a children’s book would make a world of difference. But what they didn’t realize at the time was that the book they would publish would make a difference in the world.

“Daddy’s Little Princess,” which Morgan and her father co-wrote in 2015, introduced young girls to real-life African royalty in an effort to help them see themselves in a different light. A sequel of sorts, “Dad, Who Will I Be?” (2016), introduces young boys to role models of color from the pages of history, from Martin Luther King Jr. and Muhammad Ali to Guion Bluford and Garrett Morgan.

Published by the Taylors’ company, Taylor Made Publishing, the titles struck a chord with readers at the Harlem Book Fair and Philadelphia’s African American Children’s Book Fair, where people stood in line for more than an hour to buy copies of the children’s picture books. Parents grateful to see images that represent their children have told the Taylors that these are their youngsters’ favorite books, the ones they ask to hear at bedtime every night.

“When we’re walking down the street, little girls are saying, ‘Oh, she wrote a book about me,’” Diane Taylor said. “That’s what they think. When they see the book, they think it’s them. They pick up his book, ‘Dad, Who Will I Be?’ and (say), ‘It’s me on the cover.’”

Small wonder. According to the Cooperative Children’s Book Center at the University of Madison-Wisconsin, books about children of color account for fewer than 12 percent of the more than 3,000 titles the center analyzes from across the Unites States each year. The center reports a similar absence of diversity when it looks at publishers outside the United States, which might help to explain why the Taylors have received letters from fans of their books in England, Poland and Australia.

“Never once when we made these books did we think that it was a global need,” Diane Taylor said. “In our minds, we were fulfilling a personal need, a local need. We certainly did not view it at that time as a global need.”

That began to change in 2017, when a Connecticut woman asked the Taylors if they would be willing to donate some of their books to children in Ghana. Chaquanzha Stephenson of the nonprofit organization DOPE (Don’t Oppress People, Educate) was planning a trip to share her organization’s youth advocacy and empowerment message with children in the west African nation.

The Taylors were happy to oblige. They sent dozens of copies of “Daddy’s Little Princess” and “Dad, Who Will I Be?” for Stephenson to share with students she would visit.

Though she needed a translator to present the books in the children’s native language, the images and the message were universally understood.

“It really makes a difference when you see someone that looks like you, that has the ability to do things that you don’t think that you can do,” Stephenson said. “It gave them the hope to say, ‘This is me.’”

“It was looking into themselves and saying that ‘I am capable of being this. I can do this. I am this’ (instead of) ‘I want to be this, but I know it can never happen.’”

Stephenson sent the Taylors videos that recorded the children’s reactions to the stories. But young readers were not the only ones to respond. The books earned G. Todd Taylor Ghana’s Historically Black Colleges and University Global Impact Award. The family traveled to the African republic in July for him to receive the Order of the Living Waters Award for his literary contributions.

It was a storybook moment for Taylor, a former educator with a passion for African history. The Elizabeth City State University graduate believes an awareness of their ancestry is important for African-Americans today.

Taylor, a native of Bertie County, remembers how his first school field trip centered on slavery. It was a tour of nearby Hope Plantation.

“So as everybody’s doing these tours of this plantation, I’m looking around and seeing these shacks in the back that my ancestors were living in at the time,” he said, adding that he believes it is inappropriate to teach children about slavery while they are still in the early stages of their development.

Taylor believes it is better to start with often omitted chapters on ancient African empires, which boasted great wealth and contained advancements such as libraries.

In “Dad, What Will I Be?”, Taylor includes a mention of 14th-century Mali Empire ruler Mansa Musa, who is widely considered to be the wealthiest man in history.

“When we were putting together these books, it was important that we go back and start highlighting history and understand that in order for the system that we had for the past 400 years to exist, you had to take these people out of history,” Taylor said. “Now, it’s our job, collectively, to put them back.”

Even today, Taylor said, the African continent is often misrepresented and misunderstood. He pointed out that when some friends found out that he and his family were traveling to Ghana last summer, they assumed it was a missions trip.

“(Missions trips) bypass the cities. They bypass a lot of the other culture and the greatness,” Taylor said. “That’s not to slight them because I appreciate them for going and giving aid. But at the same time they haven’t really internalized the fact that this is a place of cities and growth and economic opportunity.”

Taylor, who owns Uplift Comprehensive Services, which provides behavioral health services to troubled youth, believes that having those facts omitted tends to make people ashamed rather than proud of their African heritage.

He recalls speaking to a group of boys in his native Bertie County and being told that they viewed the description “African” as an insult. However, after he showed the boys the documentary film “Hidden Colors,” which features contributions of Africans that are often left out of the pages of history books, they reported feeling differently about their African heritage.

“One day, one two-hour documentary and follow-up conversation, it changed their perception,” Taylor said. “The impact was amazing.”

The Taylors are working to launch a video campaign on social media that they hope also will change the way African-Americans view their ancestry. Called “Black: Ourstory,” the videos are designed to feature little-known facts about people whose stories are sometimes left out of history lessons, such as Wentworth Cheswell, a black man who rode along with Paul Revere to warn colonists that the Redcoats were coming.

“It’s not just a disservice to young black kids that we’ve been erased from history; it’s a disservice to young white kids as well,” Taylor said. “When you can systematically whitewash a race out of the conversation of history, then you have to understand, this is why we have so much ignorance and why it persists.”

The Taylors are hoping that their books will serve to stem the tide of historical illiteracy. Taylor and his son, Garrett, are working on another title, “Black Boy Joy,” to be released this year.

“It’s an empowerment book,” Taylor said. “It’s kind of countering some of the negative scenarios that young black boys face, and the mantra is ‘No matter what I go through, you can’t steal my joy.’”

The Taylors said the book is not just for their son but for other boys who need to learn to view themselves as strong and capable.

“We realized that we had the potential to really make a difference in a much larger way than we initially had planned,” Diane Taylor said.

“Images matter. They make such a big difference. Even though our books are for children, we have adults that read our books that learn things and are impacted,” she said. “They hold their head a little higher, too. So for us it’s just positive imaging, the idea of rewriting the narrative about people of color around the world.”