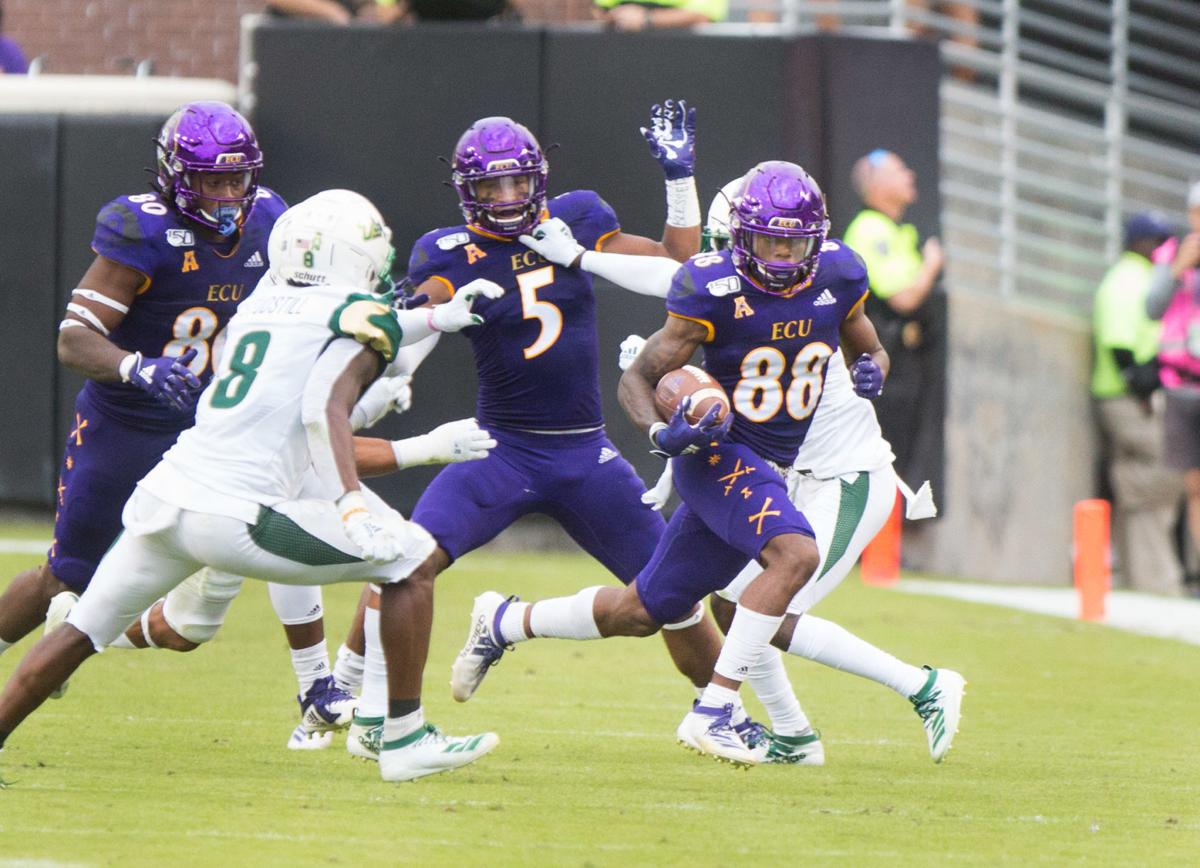 East Carolina receiver Jsi Hatfield (88) tries to get by South Florida’s Devin Studstill at Dowdy-Ficklen Stadium on Oct. 26, 2019. The Pirates’ road games scheduled for this year are against South Florida and also South Carolina, Georgia State, Tulsa, Cincinnati and Temple. 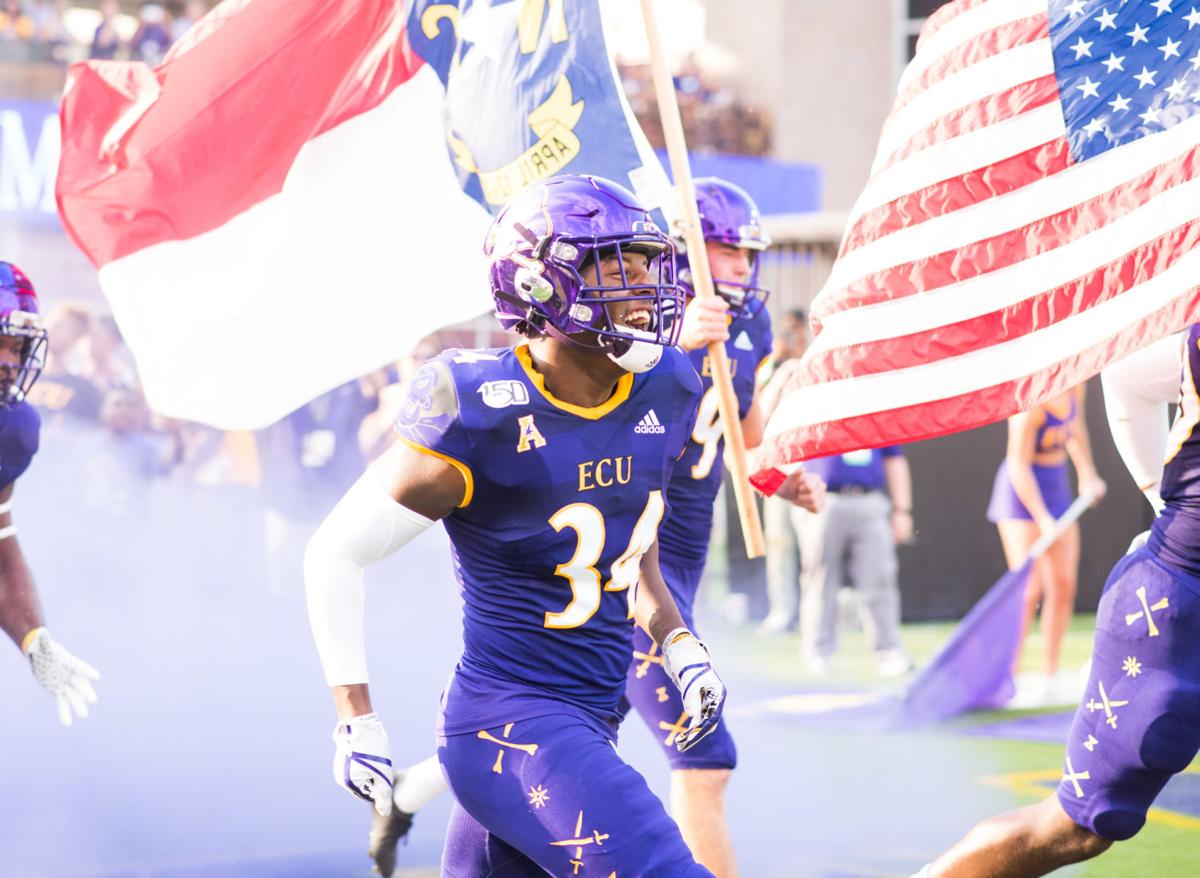 East Carolina receiver Jsi Hatfield (88) tries to get by South Florida’s Devin Studstill at Dowdy-Ficklen Stadium on Oct. 26, 2019. The Pirates’ road games scheduled for this year are against South Florida and also South Carolina, Georgia State, Tulsa, Cincinnati and Temple.

The American Athletic Conference has 11 football members this year spanning a total of nine states. There are two each in Florida and Texas, then one each in Ohio, Pennsylvania, Tennessee, Maryland, North Carolina, Louisiana and Oklahoma.

For East Carolina and the other AAC schools, part of the challenge for preparing for a possible football season is balancing individual state COVID-19 guidelines with conference-wide guidance when it comes to staging games. ECU is part of the University of North Carolina System that includes Atlantic Coast Conference members N.C. State, UNC, Duke and Wake Forest in the central part of the state, and schools separated as much as Elizabeth City State (Division II, Central Intercollegiate Athletic Association) in the east compared to Western Carolina (Football Championship Subdivision, Southern Conference) in Cullowhee.

“My belief is it’s probably going to come first from the state and kind of trickle its way down,” Pirate executive associate athletics director for external operations Ryan Robinson said during an interview last week about fans at football games. “I foresee us doing something very similar to what North Carolina is doing or N.C. State and the other schools. We’ve had communication with them as we go through this. You prepare for all kinds of scenarios, and obviously when it comes to East Carolina, we are going to follow our chancellor’s lead on what he wants. I know they are working at it from a classroom perspective and different things.”

Counting nonconference matchups against South Carolina and Georgia State, all six of the Pirates’ scheduled road games are out of state.

With the AAC, specifically, athletics director Jon Gilbert is the Pirates’ main point of contact. He has frequent conversations with league representatives and the American’s other ADs.

As campuses have reopened for voluntary workouts, specifically in football, sharing ideas is part of the unprecedented nature of the possible and hopeful return to college sports.

“We’re all dealing with the same issues, but you have certain states that have made regulations and you see how those schools are dealing with it,” Robinson said. “A lot of it still is kind of wait-and-see, and I know people don’t like to hear that, but you just have to prepare for a lot of different scenarios. My main thing I want to make sure every season ticket holder that comes (to a game) has a pleasant experience. We are going to communicate with them probably weekly as we lead up to football."

The NCAA football oversight committee on Thursday finalized an extended preseason plan that would include an extra two weeks of countable athletically related activities prior to the start of the normal 29-day preseason practice period. Up to eight hours per week would be allowed for weight training and conditioning, six hours for walkthroughs (with a football) and six hours for meetings such as position group work and film review.

The Division I Council is expected on Wednesday to pass the proposed model.

ECU made a recent push for fans to renew their football season tickets. They reached a goal of 10,000 on June 12, which prompted second-year coach Mike Houston to send a public message to fans.

Houston’s message included that he hopes to have his team’s full roster on campus in early July. ECU is scheduled to host Marshall at Dowdy-Ficklen Stadium on Aug. 29 in what could serve as a Week 0 showcase game for college football’s return to action.

“I had an idea Pirate Nation was answering the call for support when I popped into the Pirate Club offices on Monday morning,” Houston wrote. “Each staff member had a phone to their ear, interacting with fans who were renewing Pirate Club memberships and purchasing tickets. The Pirate Club annual fund continues to increase, and those funds not only help our football student-athletes, but they are vital for all our athletics programs. I’m glad I stopped in because it reassured me how fortunate I am to be a part of this university and community.

“As athletics director Jon Gilbert wrote last month, we have an opportunity to create something special again at East Carolina that many people across the country doubt is possible. It’s going to take all of us to go on this journey together."

Football is vital to many college athletic departments, including at East Carolina.

The Pirates already were facing a budget deficit in the millions of dollars prior to the COVID-19 economic downturn. They are projecting a $10 million loss in the athletics budget for this fiscal year.

University officials, namely interim chancellor Ron Mitchelson and Gilbert, have publicly outlined the importance of having students on campus this fall and being able to host football games. They both talked about that dynamic when announcing on May 21 the decision to eliminate the school’s men’s and women’s tennis and men’s and women’s swimming and diving programs.

The Pirates were on the verge of 10,000 football season ticket sales on June 11, the same day Gilbert announced all 135 full-time employees in the athletics department would be furloughed for five days between June 22 and Sept. 22 for an action that will save about $300,000.

“I know we’re coming out of a pandemic and people always ask why I’m so positive, and I’m positive because of what I see on a daily basis,” Robinson said. “I see people communicating and I see people having to make difficult decisions, but doing it the right way. That starts at the top with the chancellor, and we’re fortunate in athletics to have someone like Jon Gilbert who believes in transparency. So when we talk about (ticket) refunds, we did a Q&A a couple weeks ago about with all the questions fans could have with football. We wanted to answer them and we’re trying to be honest with everybody. I think people appreciate that.”