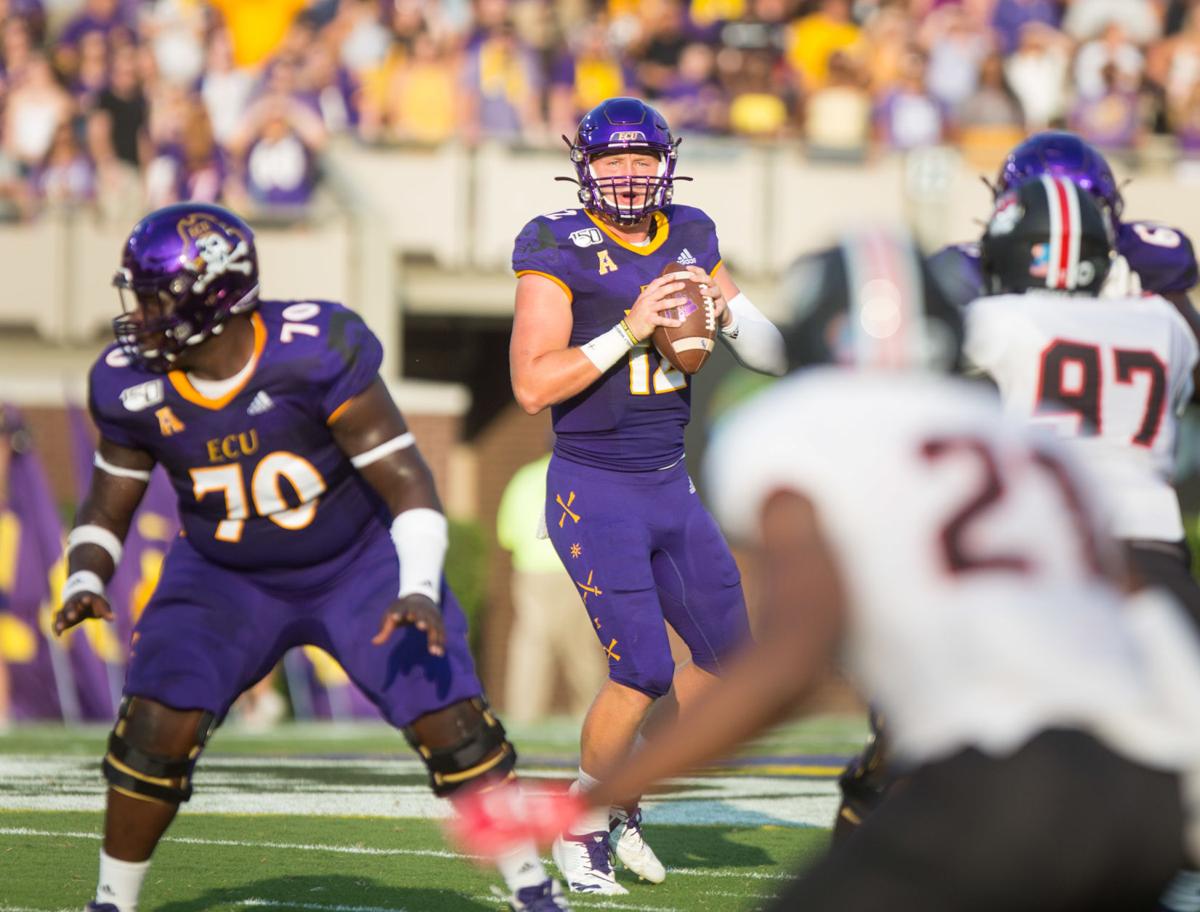 East Carolina's Holton Ahlers doors back to pass during a game against Gardner-Webb on Sept. 7, 2019. 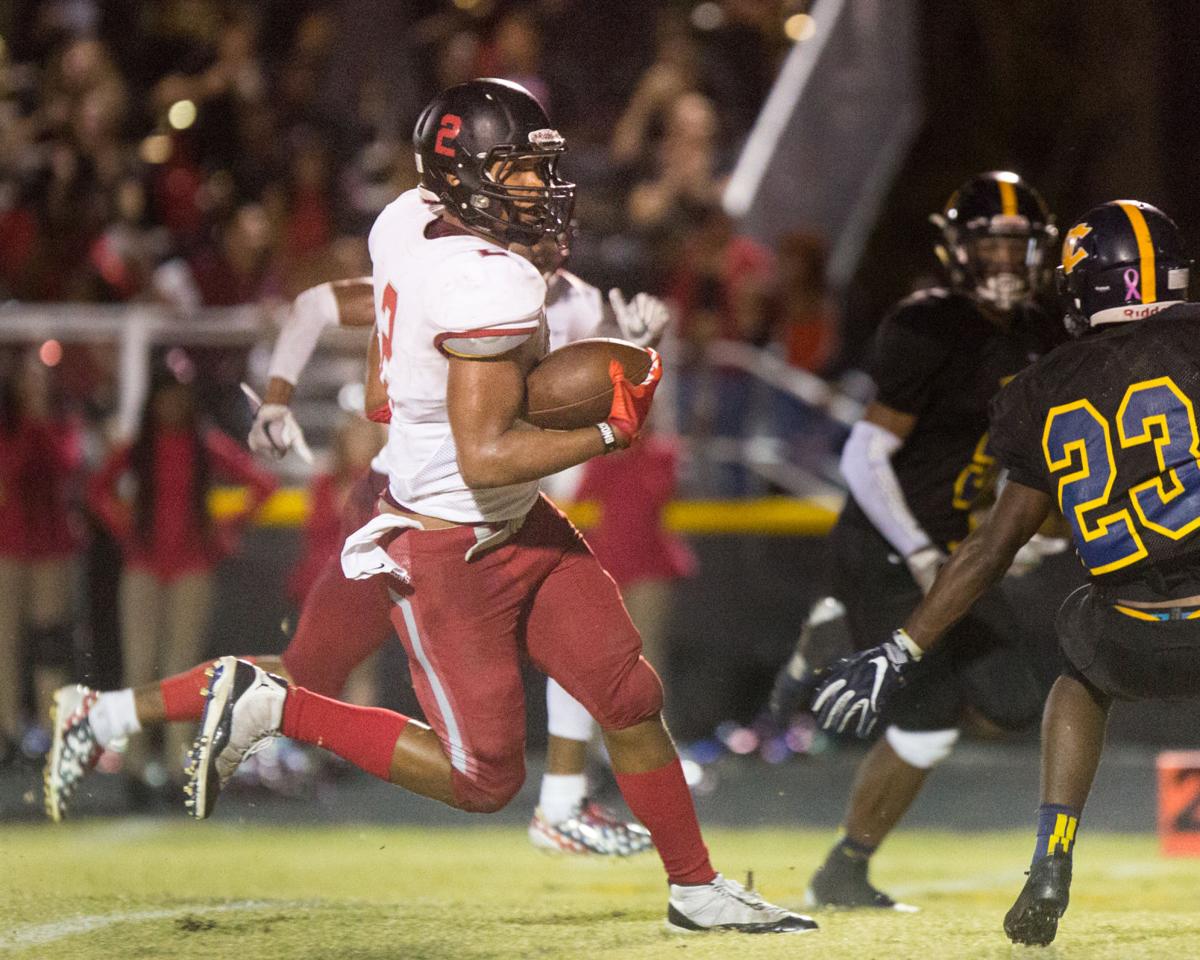 East Carolina's Holton Ahlers doors back to pass during a game against Gardner-Webb on Sept. 7, 2019.

A new wrinkle with this year's East Carolina football offense is an importance at tight end, where Zech Byrd, Anthony Watley and Jeremy Lewis all have played for ECU in both games.

Watley is a senior and the starter, but it was transfer sophomore Byrd with one catch in each game so far and Lewis, a freshman from Winterville, who nearly jumped and brought in a touchdown reception during the fourth quarter of a 34-6 loss at N.C. State on Aug. 31.

ECU had 11 different players catch a pass in Week 1. Last week in a 48-9 rout of Gardner-Webb to even the Pirates' record under first-year head coach Mike Houston, there were eight different receivers who connected with starting quarterback Holton Ahlers or backup QB Reid Herring, who saw limited action during the blowout.

"I think it is who is the better blocker on a certain type of a block or who is a better receiver, and I think Jeremy Lewis has probably showed that during practices (as a receiver)," Pirate offensive coordinator Donnie Kirkpatrick said of ECU's tight ends. "It's by committee and I like having some depth there and wish we had one more who could get in there and do it too. It's a tough position to recruit.

"What we want is a tight end who is a receiver ... but also an athletic tackle like an offensive lineman, and we like to put them in the backfield a little bit and motion them and block. There is just a lot of skills, and you just don't really find that guy in high school."

Kirkpatrick then noted that Lewis was a defensive end and wide receiver at South Central High School before signing with the Pirates to transition to tight end.

Outside receiver Blake Proehl is ECU’s leading pass-catcher heading into Saturday’s 3:30 p.m. matchup at Navy (1-0) to begin American Athletic Conference play. He has 12 receptions, 113 yards and a touchdown.

The Midshipmen, who are best known for still using the run-heavy, triple-option offense, are trying to regroup after an uncharacteristic 3-10 record in 2018.

Head coach Ken Niumatalolo, who is in his 12th year in charge at Navy, used part of the offseason to focus on defensive changes. He brought in coordinator Brian Newberry from Kennesaw State and three other new defensive assistants.

One thing Houston is counting on for Saturday is a variety of blitzes.

"Against Holy Cross (during Week 1), what I saw is a very aggressive group," he said of Navy's defense. “They are not going to really give you anything down the field in the passing game, but they are going to be aggressive at the line of scrimmage. You'll see a lot of pressure and see them blitz on first down and blitz on third down."

Three of the Midshipmen’s five senior starters play defensive line, led by end Nizaire Cromartie who had one of the team’s three sacks in Week 1. The interior senior starters are Jackson Pittman (6-foot-3, 300 pounds) and Marcus Edwards (6-4, 289).

After Wednesday's practice for ECU that included the defense practicing some without a football to test players' accountability and gap control, Kirkpatrick and Houston both broke down how unique it is for an opposing offense when playing against a team like Navy or Army.

"We will try to do the same thing that they are trying to do," said Houston, who also said Wednesday that senior cornerback Colby Gore is active to play this week after serving a two-game suspension for an infraction he made during the winter. "We will try to drive the football and keep their offense on the sideline. You have to stick the ball in the end zone is a thing you need to do to be productive against a team like this."