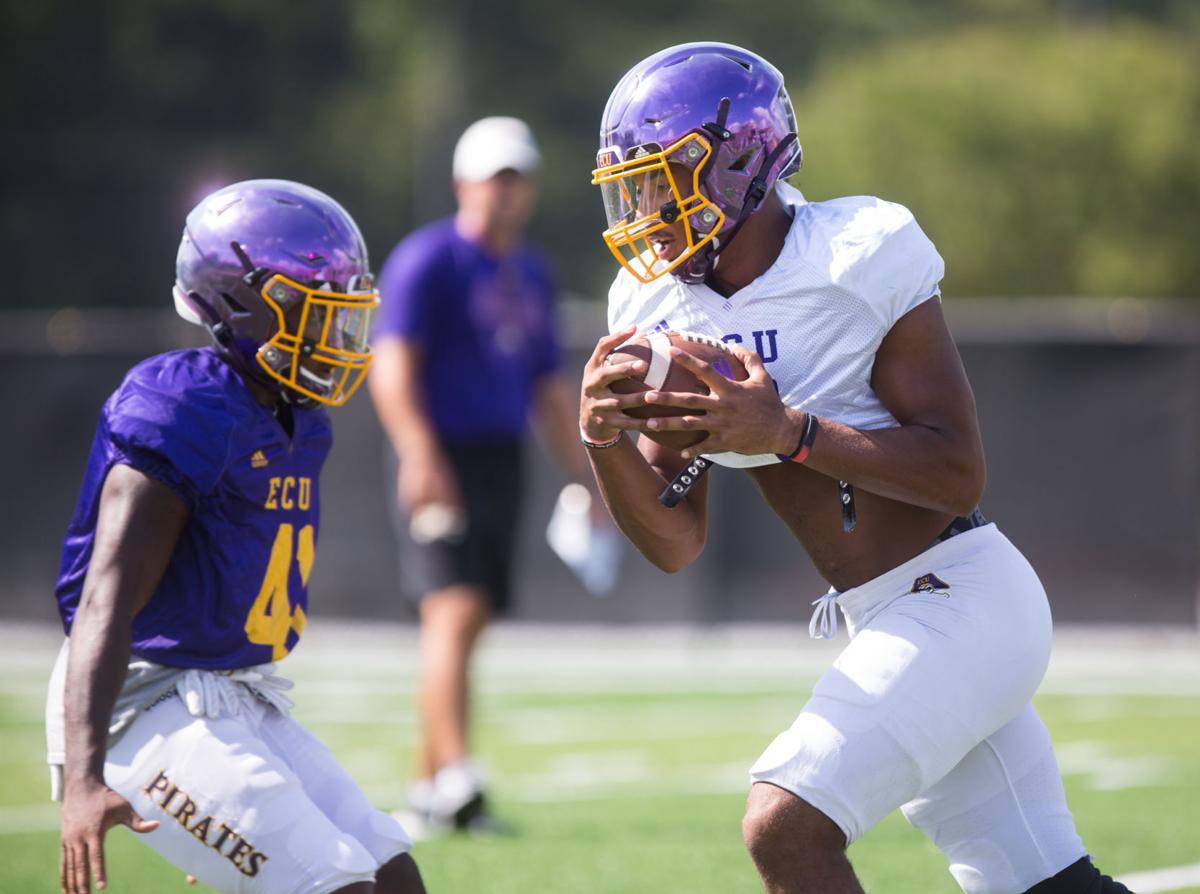 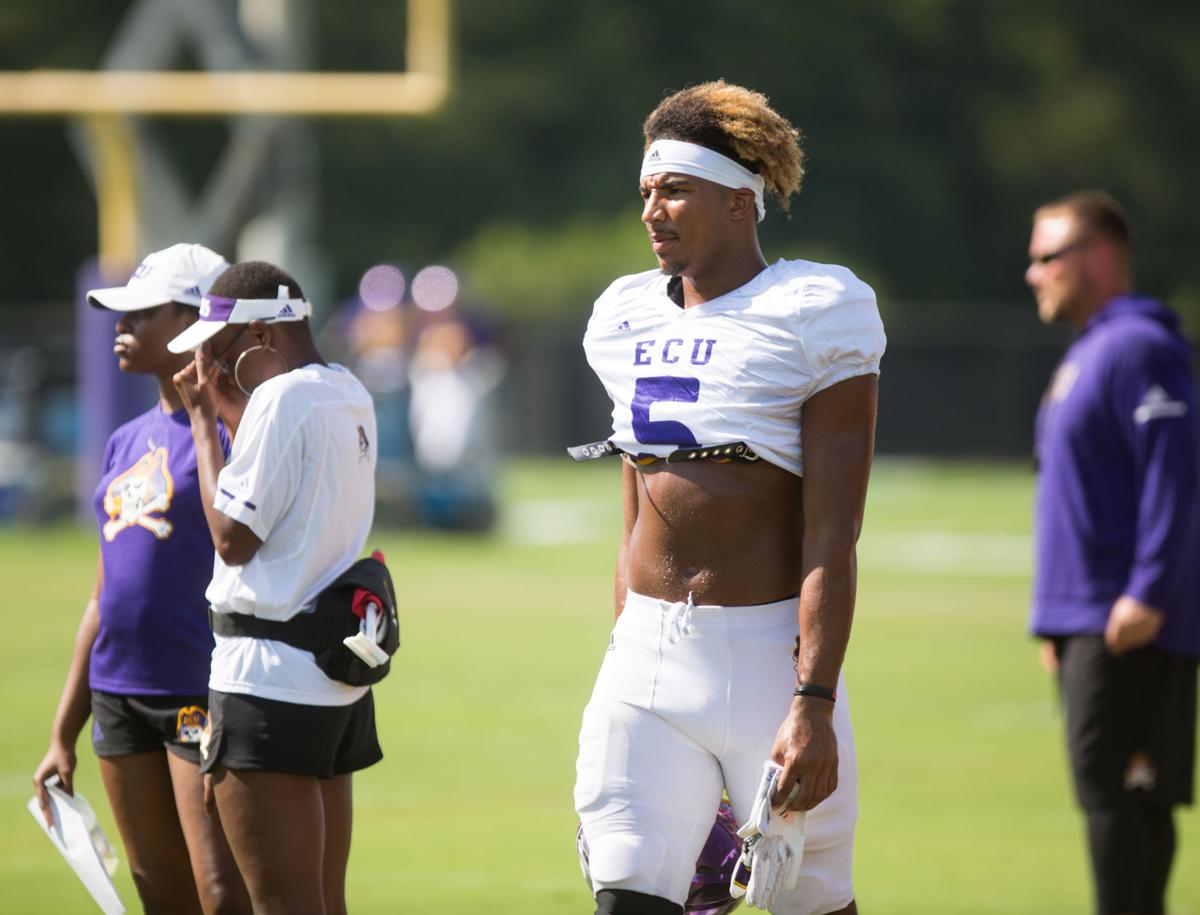 East Carolina's C.J. Johnson watches from the sideline during practice on Aug. 20, 2019. 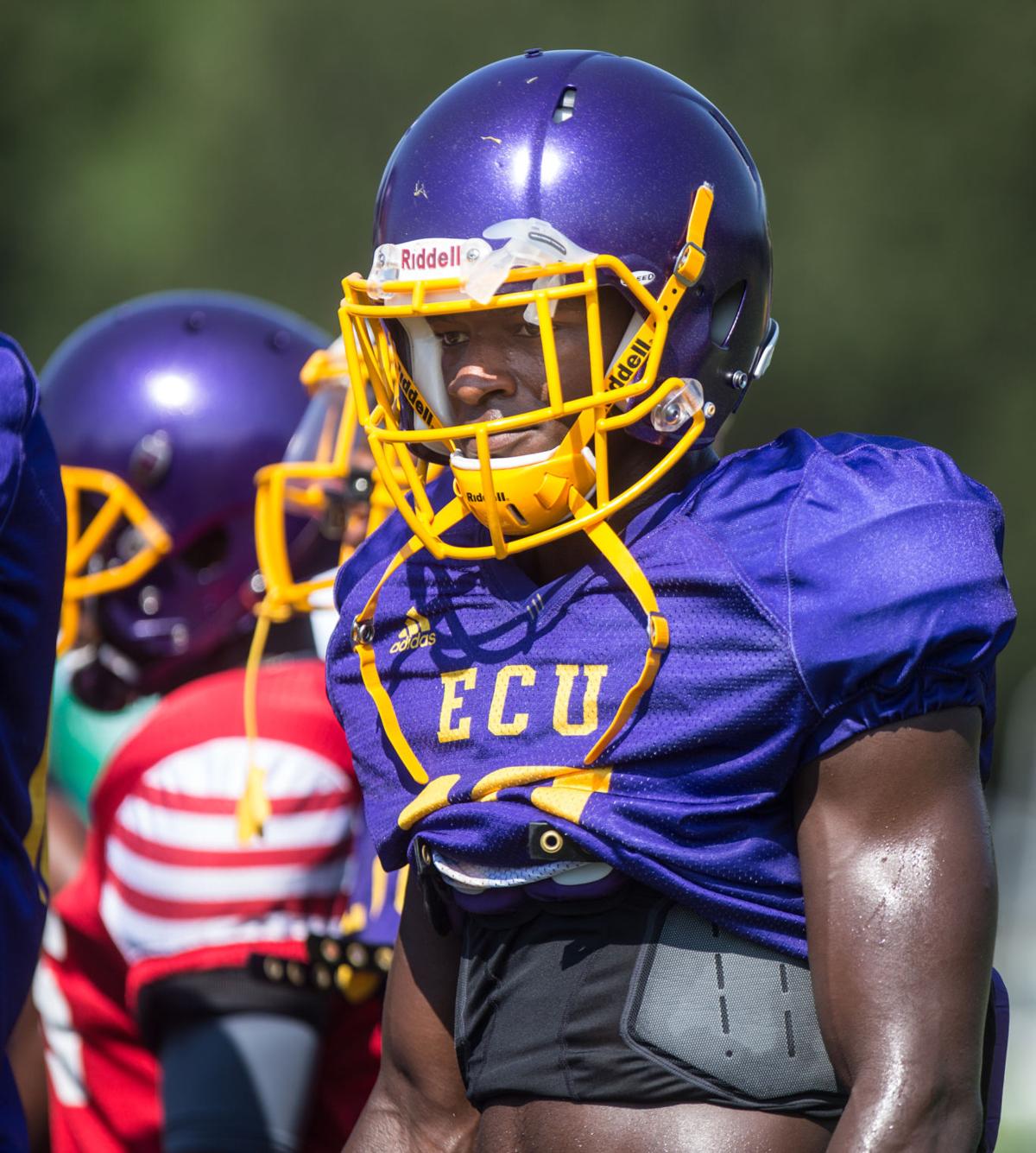 East Carolina's C.J. Johnson watches from the sideline during practice on Aug. 20, 2019.

The basics of playing receiver in football begin with catching the ball.

For East Carolina's offense this season to look like the successful and physical offenses at James Madison the last few years, however, the Pirates and head coach Mike Houston and offensive coordinator Donnie Kirkpatrick are counting on their pass-catchers to play with a physical mindset.

Physicality has been a theme for new-look ECU all offseason, at all positions, but on offense is where Pirate coaches who used to be at JMU want to utilize the tight end position and receivers as quality blockers in the run game and in many ways an extension of the offensive line.

"If you don't block, you don't play," Kirkpatrick said on Wednesday, one day after Houston officially announced Holton Ahlers as the Pirates' starting quarterback for this season.

Ahlers is a left-handed, dual-threat QB who led ECU in rushing last year as a freshman and comes into his sophomore campaign at 6-foot-3 and 235 pounds.

Deondre Farrier made 30 receptions in 2018, including two touchdowns, and is the Pirates' lone senior receiver. Steady outside receiver Blake Proehl also is slated to start in what he hopes is a complete and healthy season after previously dealing with injuries.

A productive preseason by Mydreon Vines, a 6-foot-1, 180-pound junior and 2017 J.H. Rose High School graduate, also has him pushing for prominent playing time. He has received praise from coaches for his effort with blocking.

"I think they are buying into it and we are much improved, when it comes to blocking on the perimeter, to where we were in the spring," Kirkpatrick said. "You can actually hear some people running into each other out there a little bit right now. The competition is good.

"Now, we have to make some plays and find some playmakers and I think we have a few. We just have to push ahead, because you need depth and never know when somebody might get hurt and you can't just be a one-receiver (team)."

ECU has had a 1,000-yard receiver in an NCAA-best seven straight seasons. Trevon Brown did it last year as a senior, totaling 1,123 yards and nine touchdowns on 74 catches.

Two newcomers who have plenty of potential are freshman C.J. Johnson and UCLA transfer Audie Omotosho, whose first practice with the Pirates was on Aug. 14 and he is eligible immediately to play this year.

Johnson's reps with the first-team offense have only increased since the start of preseason camp, providing him the chance to prove he could be an immediate impact player.

He also has a long-time connection to Ahlers, both as former D.H. Conley stars.

Ahlers' senior season at Conley, in 2017, was when Johnson was a junior and the receiver dazzled and dominated with the help of Ahlers for 68 receptions for 1,547 yards and 31 TDs. Ahlers accounted for 75 total touchdowns (61 passing, 14 rushing) that year during the final season of him and Johnson together at Conley.

“He just needs to continue to run fast routes and get conditioned for college football and the speed of it,” Ahlers said of Johnson.

"He is going to be a great player here and it’s obvious that we have a connection. We have played well together for a long time now, and a lot of the other receivers I have a good connection with, too."