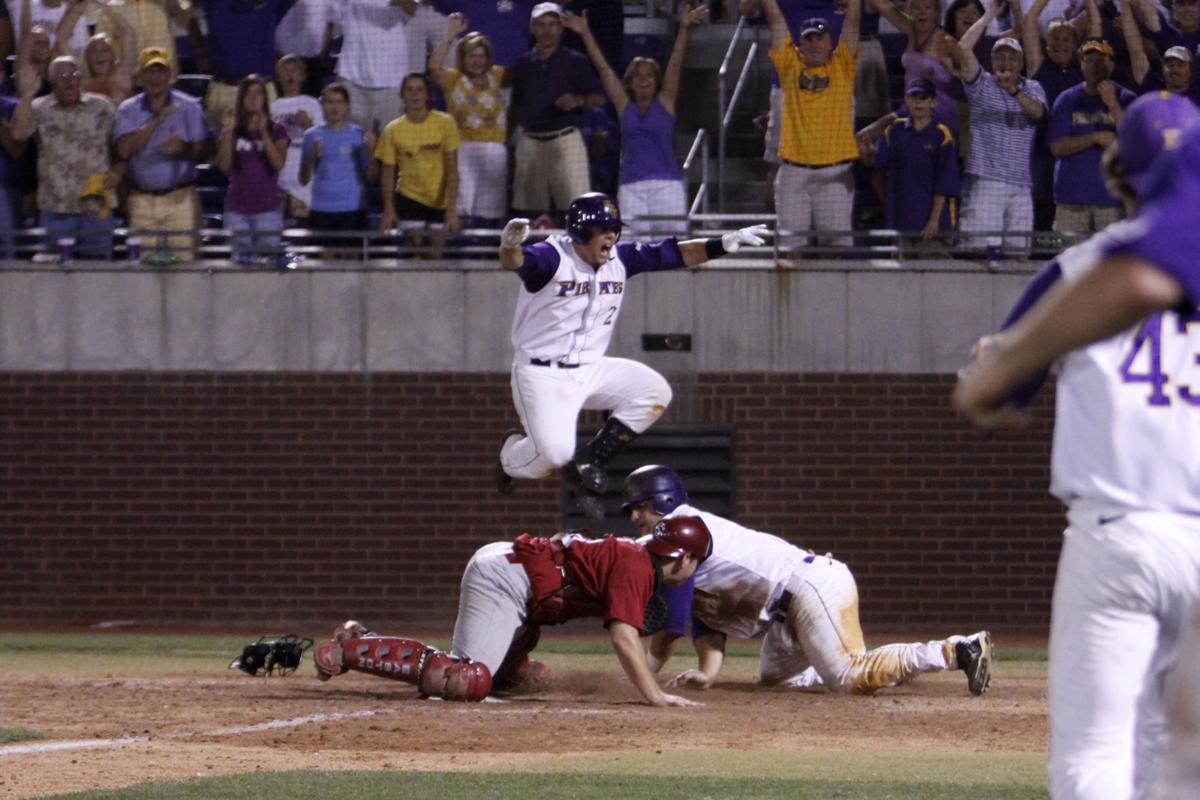 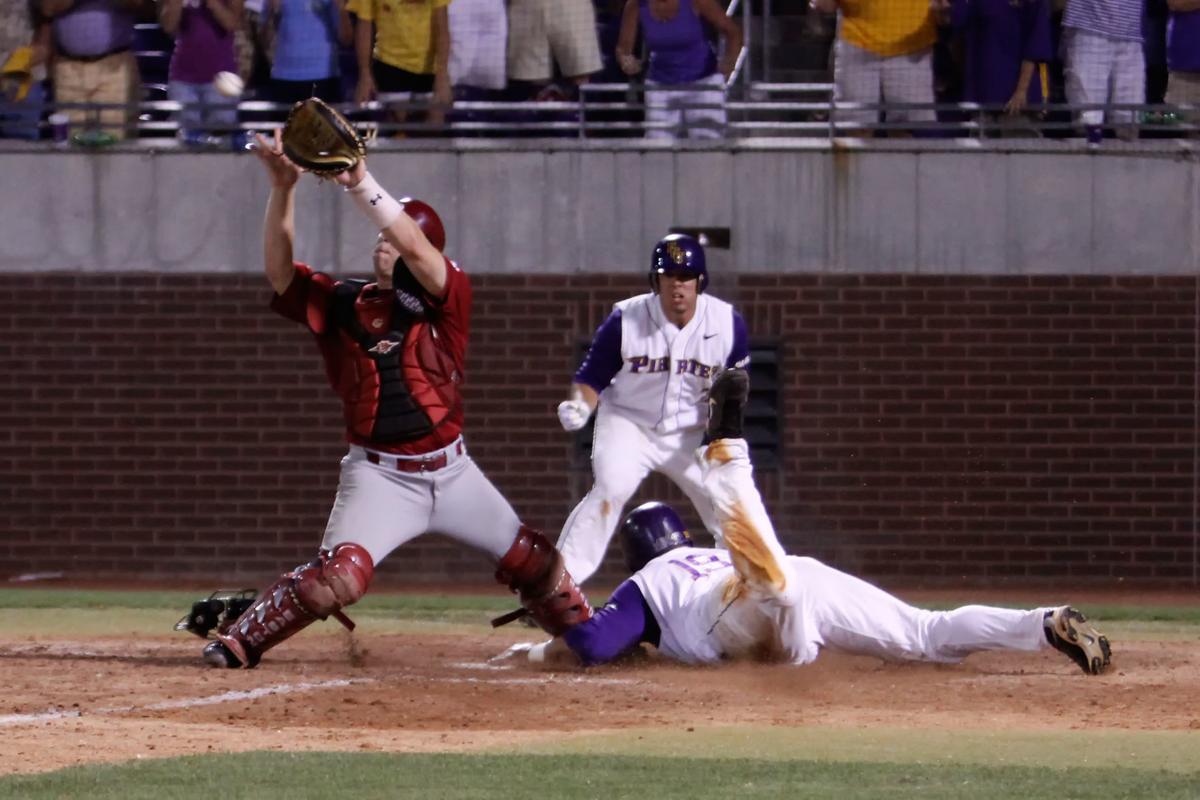 East Carolina’s Kyle Roller scores the winning run in the 10th inning ahead of South Carolina catcher Justin Dalles, left, for the Pirates to win the 2009 NCAA Greenville Regional at Clark-LeClair Stadium.

East Carolina’s Kyle Roller scores the winning run in the 10th inning ahead of South Carolina catcher Justin Dalles, left, for the Pirates to win the 2009 NCAA Greenville Regional at Clark-LeClair Stadium.

Kyle Roller is second all-time in East Carolina baseball home runs with 51. He ranks first in career hit by pitches, and is third in RBIs.

He was a burly and imposing left-handed pull hitter for the Pirates from 2007-10, but his “YouTube moment” showcases his deceptive speed on the base paths during the 2009 NCAA Greenville Regional. Devin Harris smacked a single up the middle and Roller churned from second base to home plate to score the winning run for ECU to beat South Carolina, 10-9, in the 10th inning of a regional championship game the Gamecocks led 6-0 after the top of the fifth.

“It wasn’t so much of a surprise to us,” teammate and fellow 2009 All-American Ryan Wood said of Roller’s turn around third base, sprint to home and sideways slide to beat a throw from center fielder and now-Kansas City Royal Whit Merrifield. “I still go look at the YouTube video every now and then and still get chills watching it. Kyle ran every bit of a 7.0 or 7.1 60-yard dash, and that’s pretty impressive for somebody that is his size.”

Roller told himself “Go big fella, go” as he was running. Still, what he remembers most now is the celebration and dogpile after his slide.

It was the second tight win over South Carolina in as many days for ECU and coach Billy Godwin. The Pirates were hosting on campus for the first time and lost to South Carolina earlier in the regional to drop into the losers’ bracket. The ending for Roller and the Pirates in their third game of the weekend against the Gamecocks is considered one of the most thrilling moments ever in Clark-LeClair Stadium.

“I’m pretty sure I was unconscious at one point at the bottom of that pile,” Roller said. “ECU is known for its electric crowds and having some of the best fans in the nation. I just remember that atmosphere being so electric. Once I realized I was safe and everybody started running at me, I really didn’t know what to do. I just kind of threw my stuff up in the air and let the celebration begin. ... It was one of the greatest highlights of my career and something I’ll always remember.”

The 10th inning was created thanks to Harris not only leaping at the right field wall for a home run-saving catch, but also by his three-run, game-tying home run in the bottom of the ninth. Harris finished 4-for-5 with five RBIs. Wood hit a two-run homer in the fifth, and Roller was 2-for-4 with two runs scored.

“Devin was my roommate and, in my mind, he’s an ECU legend,” Roller said.

Like all of East Carolina’s other four regional championship teams, the ‘09 Pirates fell one weekend short of reaching the College World Series. They lost both of their super regional games in Chapel Hill to North Carolina.

“I feel like if we played anybody but Carolina, we would have gone to the College World Series,” Roller said. “We just played those guys so much and they knew us and we knew them. They were a good group of guys and a tough team. ... They had our number, but like I said, I think if we played anybody else in the country then we go to the College World Series.”

The legacy of the 2009 Pirates is tied to ECU earning regional No. 1 seeds in previous years, but not hosting in Greenville until after Clark-LeClair Stadium opened in 2005. ECU was the top seed in Baton Rouge, La., in 1999, the next year in Lafayette, La., in Wilson in 2001 and Kinston in ‘04.

Hosting on campus, and winning, was a turning point for the Pirates that all of their teams can embrace.

“Some pressure came with that too, which I don’t think we realized until we were in the heat of it,” said Wood, who finished with 100 hits and a school-record 87 runs scored that year. “Being the first team to actually host and especially after we lost our first game to South Carolina, there was some pressure to be the first team to host the thing at home and not win it.

“We didn’t have to (travel) as a No. 1 seed anymore, but we were able to host and win and kind of carry that torch and pass it on to these future teams that have been a lot of fun to watch. ... Our dogpile was honestly just 15 to 20 seconds of pure joy, but then we all realized Roller was at the bottom of the pile and he was screaming he couldn’t breathe.”