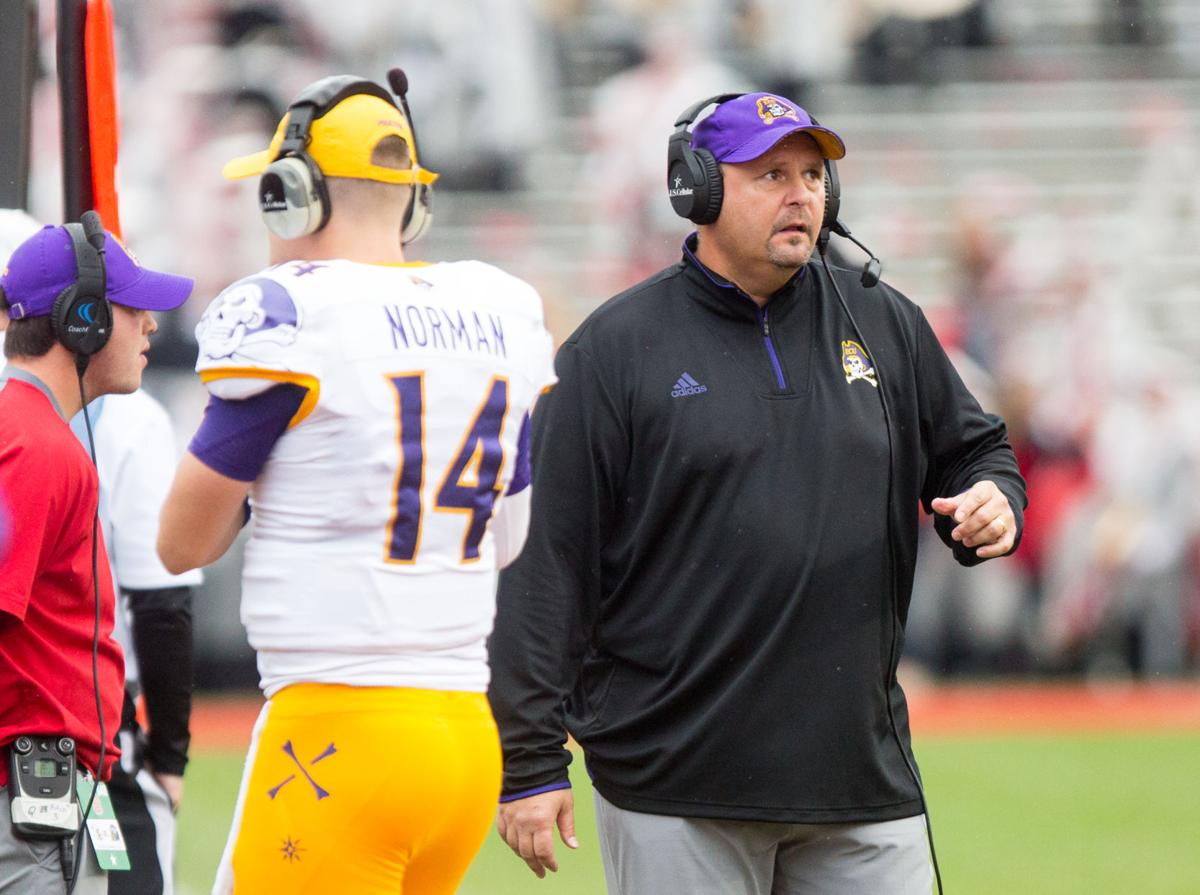 David Blackwell served as East Carolina interim head coach for the Pirates at N.C. State on Dec. 1, 2018. He is Old Dominion's defensive coordinator this season. 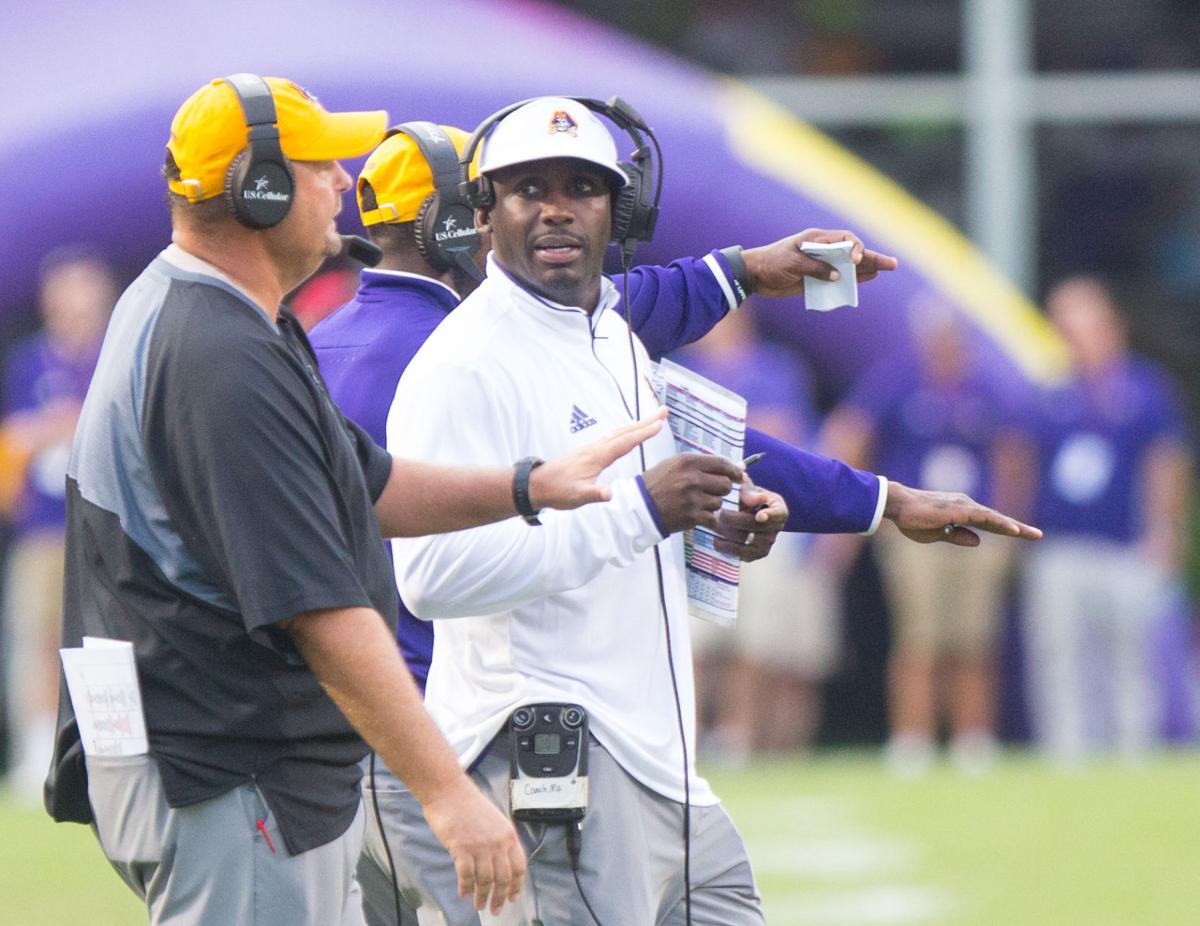 David Blackwell served as East Carolina interim head coach for the Pirates at N.C. State on Dec. 1, 2018. He is Old Dominion's defensive coordinator this season.

It is not only David Blackwell who brings a uniqueness to Saturday night in Norfolk, Va., when East Carolina football’s offense is going against Old Dominion’s defense.

ECU first-year offensive coordinator Donnie Kirkpatrick, who like most of the Pirates’ assistant coaches came to Greenville in December with head man Mike Houston from James Madison, noted other connections after Wednesday’s practice.

“(ECU offensive line coach) Steve Shankweiler recruited (Blackwell) and coached him and has known him for a long time,” Kirkpatrick said. “Another interesting part is (ODU tights end coach/run game coordinator) Bryan Stinespring coached with us for two years at James Madison. This summer, we talked about some signal issues and terminology issues.”

In short, the Pirates (2-2) know the schemes that form the foundation for ODU’s attacking defense that ranks 21st in the country in stopping the run. Blackwell and the Monarchs (1-2) have plenty of built-in knowledge about ECU’s personnel and player tendencies.

What remains, according to Kirkpatrick, is an importance on who wins individual battles beginning Saturday at 6 p.m. in S.B. Ballard Stadium.

“We know what they are going to do and they knew what we are going to do, you just don’t know what each other is going to do at what time,” Kirkpatrick said. “I think we have to be who we are, and we are trying to establish what we like to do, so we have to get that mindset and execute. ... They run well and are very aggressive, and I think we’ll be OK as far as knowing what they are doing, but somebody has to win some 1-on-1 (plays) out there.”

As for the emotions of playing against Blackwell, who served as the Pirates’ interim head coach for the final game last season after Montgomery was fired, ECU’s players have said this week they still have plenty of respect for their former coach.

“He was coach here and it will be fun, but at the same time, he is on the opposite side, so we’ll go at it for four quarters and then after we will go up to him (to talk),” said receiver Tyler Snead, who is a redshirt freshman this year thanks in large part to Blackwell not playing Snead in the final game of 2018 at N.C. State to preserve the player’s four-game redshirt status.

Pirate kicker Jake Verity added that Blackwell’s role is an obvious aspect of this matchup.

“He clearly knows a lot of our players because most of them were here last year with him and built that relationship with him as a coach, so it will be interesting to see how all of that unfolds,” said Verity, a junior who was 4-of-5 on field goals last week in a 19-7 victory against William & Mary.

The major development for the Pirates’ offense Tuesday was that senior running back Hussein Howe and backup quarterback Reid Herring left the team to transfer.

ECU has some quality depth at running back, where Trace Christian, Demetrius Mauney and Tay Williams are set to lead the way. Now backing up sophomore starting QB Holton Ahlers, however, is true freshman Bryan Gagg, who has not taken a snap in a game. Herring played in ECU’s first three games and was a part-time starter a year ago.

“I’m disappointed in (Herring’s) decision, and I support his decision, but it has put us in a bind a little bit because we would be very inexperienced at quarterback if something were to happen to Holton,” Kirkpatrick said. “I am nervous about that, and you are always nervous, but I am really nervous because if something were to happen to Holton then we would have to really limit what we could do.”