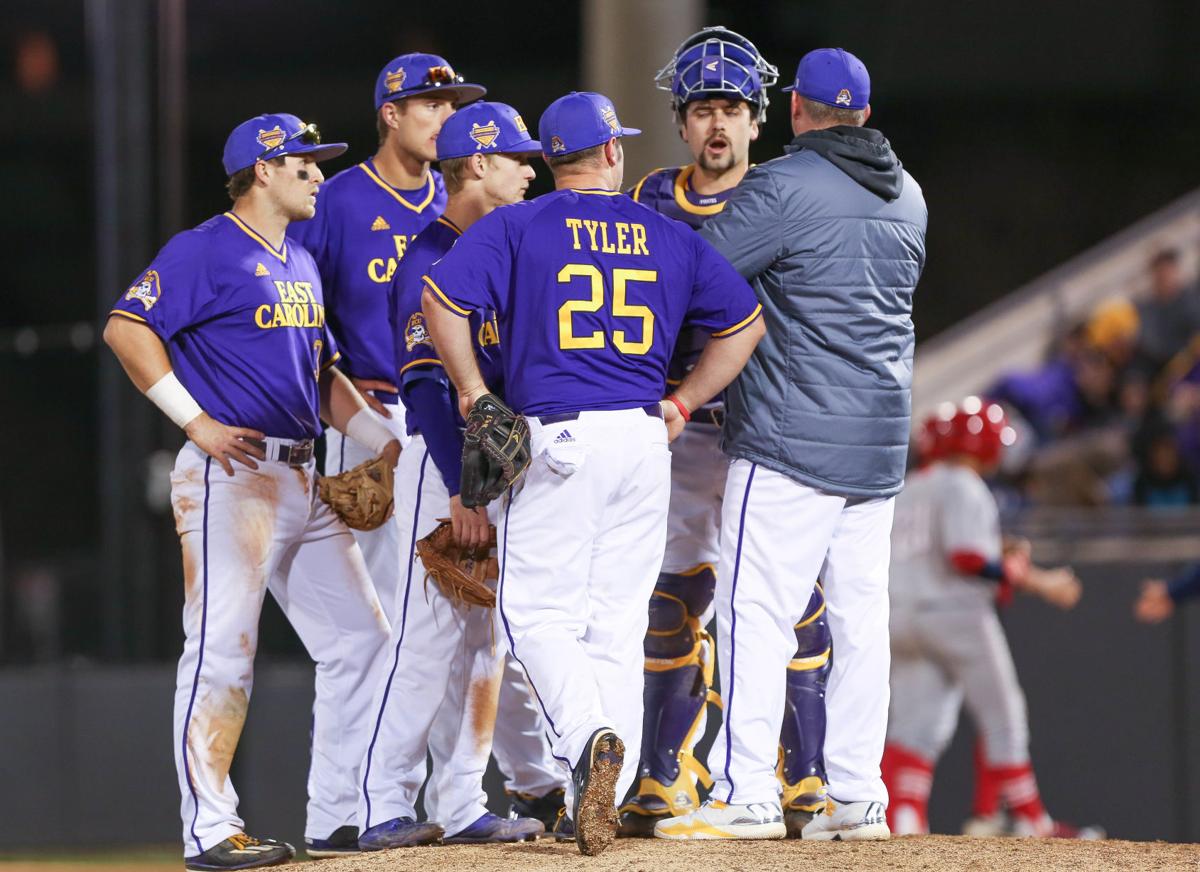 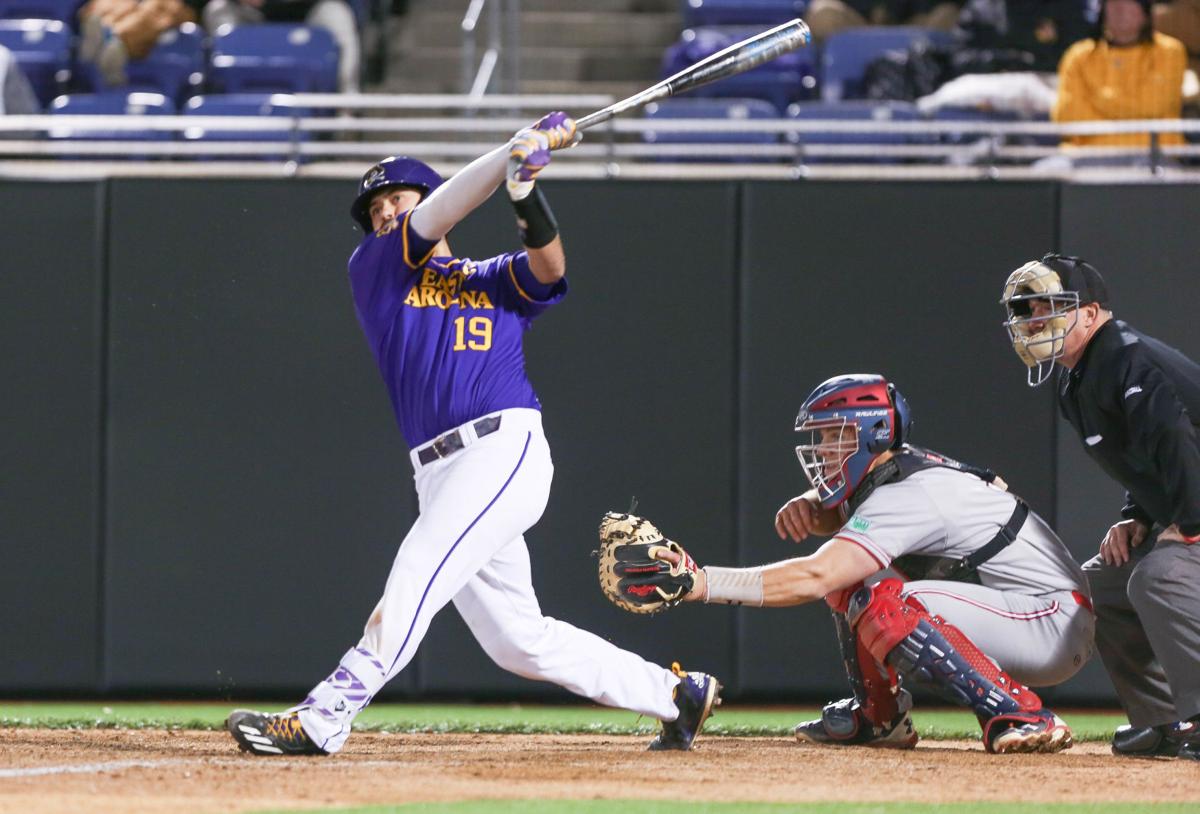 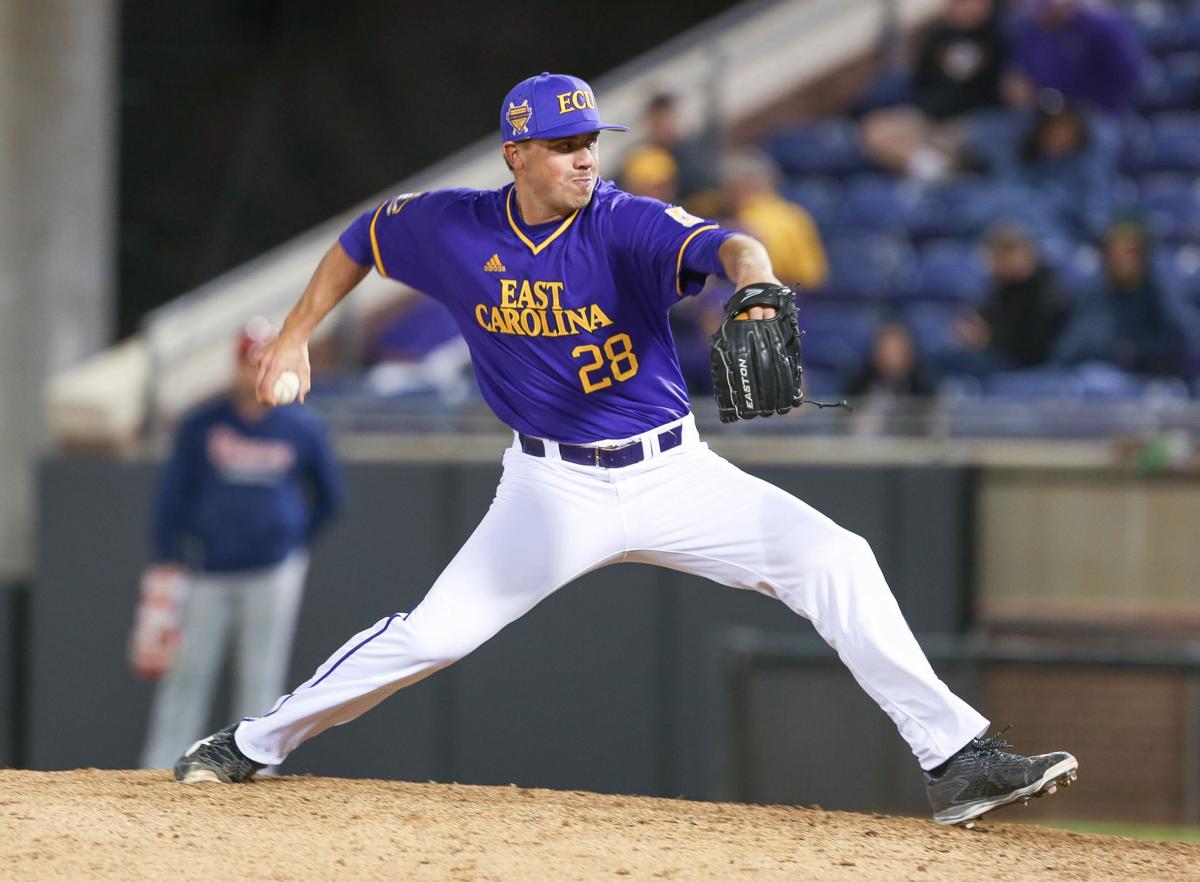 For a tournament played in large part to honor former East Carolina baseball coach Keith LeClair, who yearned for big-time atmospheres at ECU’s home stadium before his death in 2006 from ALS, Saturday night’s game between a St. John’s team that came in undefeated and the ninth-ranked Pirates was intensity-filled in an NCAA regional-type setting.

The marquee matchup of the 14th annual LeClair Classic featured three ties, a crowd of 3,207 and plenty of emotion, and ECU broke free for the final time with a four-run, two-out rally in the bottom of the eighth inning in a 7-4 win. It was the seventh straight victory for the Pirates (7-3) and it dropped the Red Storm, which is ranked as high as No. 16 by Collegiate Baseball, to 9-1.

Kirk Morgan had a clutch hit-and-run single for the hosts in the eighth with the score tied 3-3, moving Travis Watkins to third base before Watkins came home on a wild pitch for the go-ahead run. Turner Brown also hit a two-run double for one of the many moments that fired up the home dugout.

The four-run outburst gave the Pirates a 7-3 advantage to take to the ninth. Matt Bridges got the final three outs in a non-save situation, and reliever Sam Lanier (1-1) earned the pitching victory with 2 2/3 innings and one run allowed.

“Any time we play on our field, it’s our time to win,” said ECU coach Cliff Godwin, who was ejected in the fifth inning for arguing with the home plate umpire. “This is our house, man. We’re going to lose some games here, but we take a lot of pride in wearing the purple and gold in front of our home crowd.”

Things heated up in the top of the fifth, when Tyler Smith relieved starting pitcher Jacob Wolfe for the Pirates with the bases loaded and got two strikeouts with the game tied 1-1. Then Smith balked, and an apparent delayed call by the umpire was followed by crowd jeers and Godwin charging out of the dugout and getting ejected quickly for arguing as SJU scored on the balk for a 2-1 edge.

Second baseman Charlie Yorgen also was emotional and vocal during that sequence, which included Smith inducing an infield popout to get out of the jam amid high emotions.

The ruling was that Smith didn’t come to a complete stop before throwing the pitch.

“He said it was a balk and I said it wasn’t, and that’s it,” Godwin said of his exchange with the umpire. “It was unfortunate because Tyler Smith pitched his butt off, even with the one run. For a freshman to come in with the bases loaded and strike the first two guys out, that was a very valuable experience moving forward.”

In the bottom of the inning, Yorgen, Luke Bolka and Spencer Brickhouse were hit by pitches as ECU produced a two-run frame for a brief 3-2 lead. The Storm then tied it in the top of the sixth on an RBI double by John Valente.

Yorgen continued to excel as the the Pirates’ leadoff hitter, scoring two runs as part of a 1-for-2 outing with two walks. Brown batted second in the lineup and was 2-for-3 with two RBIs and a run scored.

“This place was rowdy and it was really, really fun to play in front of,” Yorgen said. “Thank you to all the fans. St. John’s was a great team and great guys, but this was a very fun environment tonight and let’s keep it that way.”

Wolfe gave up two runs (one earned) on seven hits in four innings.

An in-state battle went the way of Appalachian State thanks to a late six-run rally.

Western Carolina led 3-2 before the Mountaineers (5-5), who play East Carolina today, pushed across six runs in the bottom of the eighth to create the final score. The WCU (4-5) bullpen had three pitchers give up six runs (four earned) in three innings combined.

App. State’s offense was led by shortstop Matt Vernon, who batted third in the lineup and went 3-for-5 with a run scored and an RBI.