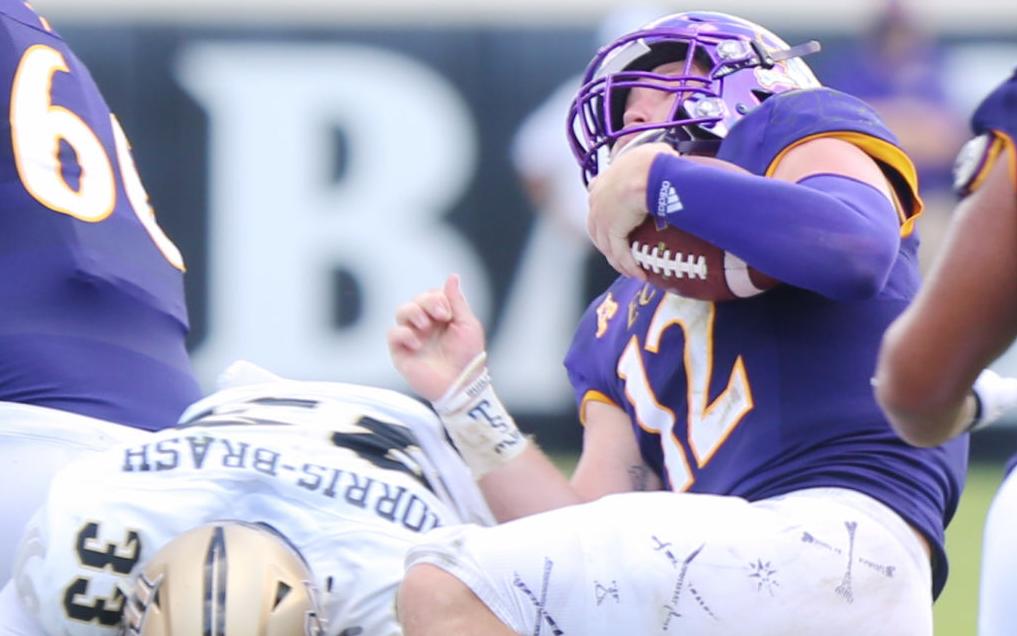 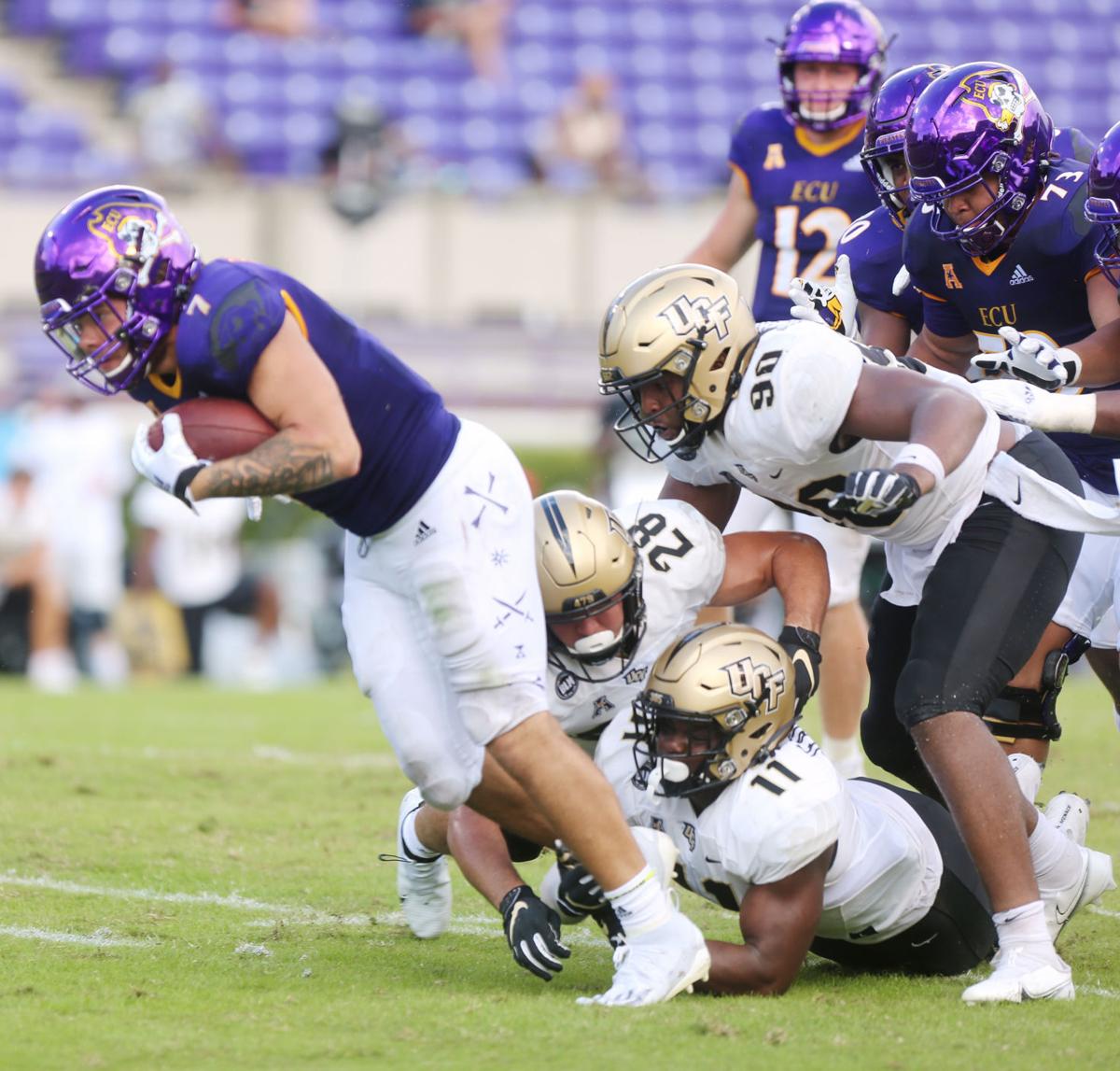 Instead of hosting Marshall on Sept. 12, East Carolina’s first football game this year was Sept. 26 against UCF at Dowdy-Ficklen Stadium.

Instead of hosting Marshall on Sept. 12, East Carolina’s first football game this year was Sept. 26 against UCF at Dowdy-Ficklen Stadium.

Mistakes have been costly for both ECU and South Florida a few weeks into their seasons. They meet Saturday night with each team looking to capture its first American Athletic Conference victory of the year and avoid a slip already to the very bottom of the league standings.

“Our players will come in and watch the film, and you cut out a half-dozen mistakes here and there, and it’s a completely different ball game,” said Pirate coach Mike Houston, whose team did not score an offensive touchdown a week ago in a 49-29 defeat at Georgia State. “That’s what happens when you play veteran teams, because when you make a mistake, they make you pay for it. That’s our big focus this week is cutting down on the mistakes, whether that’s a pre-snap penalty or procedural or working together on (offensive line) protection or the secondary is rotating this way. We have to make sure we cut down on the mistakes and we continue to push them to play hard and play fast.”

The loss to Georgia State snapped the Pirates’ streak of 10 straight games with a passing touchdown. Quarterback Holton Ahlers was 29-of-50 for 242 yards and three interceptions before freshman Mason Garcia handled the game-ending drive with a 10-yard run and two incomplete passes.

ECU is 0-2 after being outscored by a total of 100-57 versus UCF and Ga. State. USF started the coach Jeff Scott era with a 27-6 win over The Citadel from the Football Championship Subdivision, then struggled on offense in lopsided losses to Notre Dame (52-0) and Cincinnati (28-7).

A semi-normal college football atmosphere will be part of the ECU-USF matchup. After the Pirates had only a maximum of 350 family members for their home contest on Sept. 26 and a crowd of 3,823 against Georgia State in Atlanta, South Florida has plans for approximately 8,000 lower bowl seats to be available and around 3,000 more in suites for its October home games at Raymond James Stadium.

“I definitely would like to encourage our fans, our students and anyone in this (Tampa) Bay area to come out,” Scott said. “We’ve all been cooped up due to COVID. This is an opportunity on a Saturday night to come out and watch our hometown team play. I think it’s going to be a special night and I’m looking forward to it. ... It’s our first game in Raymond James with fans, so I’m really looking forward to that.

“I really like the energy and intensity, which is a little uncommon coming off our second loss. The guys had probably the best Tuesday (practice) that we’ve had, and that’s a good sign.”

USF has one touchdown pass in three games compared to five INTs. For ECU, its running back group of Darius Pinnix, Keaton Mitchell, Chase Hayden and Rahjai Harris will be looking for more production after those players were held to a total of 22 yards on 18 combined carries in Atlanta.

“We had a lot of mental assignments and mistakes,” offensive coordinator Donnie Kirkpatrick said. “We do have a young group and there are a ton of excuses, but nobody cares about that. I thought we looked a little slow and we just didn’t have the energy that we had in the first game, so that was a little disappointing, too. There were a lot of things like that, and you go back to fundamentals.”

Ahlers is 43-of-79 (54.4 percent) with 451 passing yards, three touchdowns and four INTs two games into his junior campaign.

“We’ll continue to try to get (Garcia) game reps when the situations arise, but at the same time, we’re going out there and playing to win and, right now, Holton’s experience and Holton’s ability gives us a better chance right now,” Houston said.

The Bulls used three quarterbacks last Saturday, with sophomore Jordan McCloud attempting the most passes, and continued their QB competition during practices this week without laying out a definitive plan. The team’s only touchdown since Sept. 12 is a 2-yard run by Johnny Ford against Cincy.

Mitchell, a 5-foot-9, 181-pound freshman, is the Pirates’ leading rusher at 66 yards thanks to a long run of 20 yards. Pinnix (19-40) is the only RB with with a touchdown, which came during the opening game along with a 17-yard TD reception on the Pirates’ initial possession of the season.

A productive player for the inconsistent Pirate offense thus far is Tyler Snead, who scored a touchdown against UCF and had a 31-yard TD run on a fake field goal versus GSU. Snead and Blake Proehl each have 13 receptions for the year, while talented C.J. Johnson has been frequently double-teamed and held to 52 yards and a touchdown on three catches.

“He really controlled his emotions (against Georgia State), but he just couldn’t get involved in the game,” Kirkpatrick said of Johnson, a former high school teammate with Ahlers who last year had an ECU freshman season record of 908 receiving yards. “He had a couple fundamental things we’ve really tried to work on. You just try to go back and tell everybody that really how well you play is not determined necessarily by how many catches you make. That’s just part of it. When you’re not thinking about it, it will come his way.

“He’ll get the ball and he’ll start making those plays. It’s early in the year and nobody wanted to have played poorly or have lost already, but I think he’s in a pretty good place this week and he acts like he’s ready to go.”