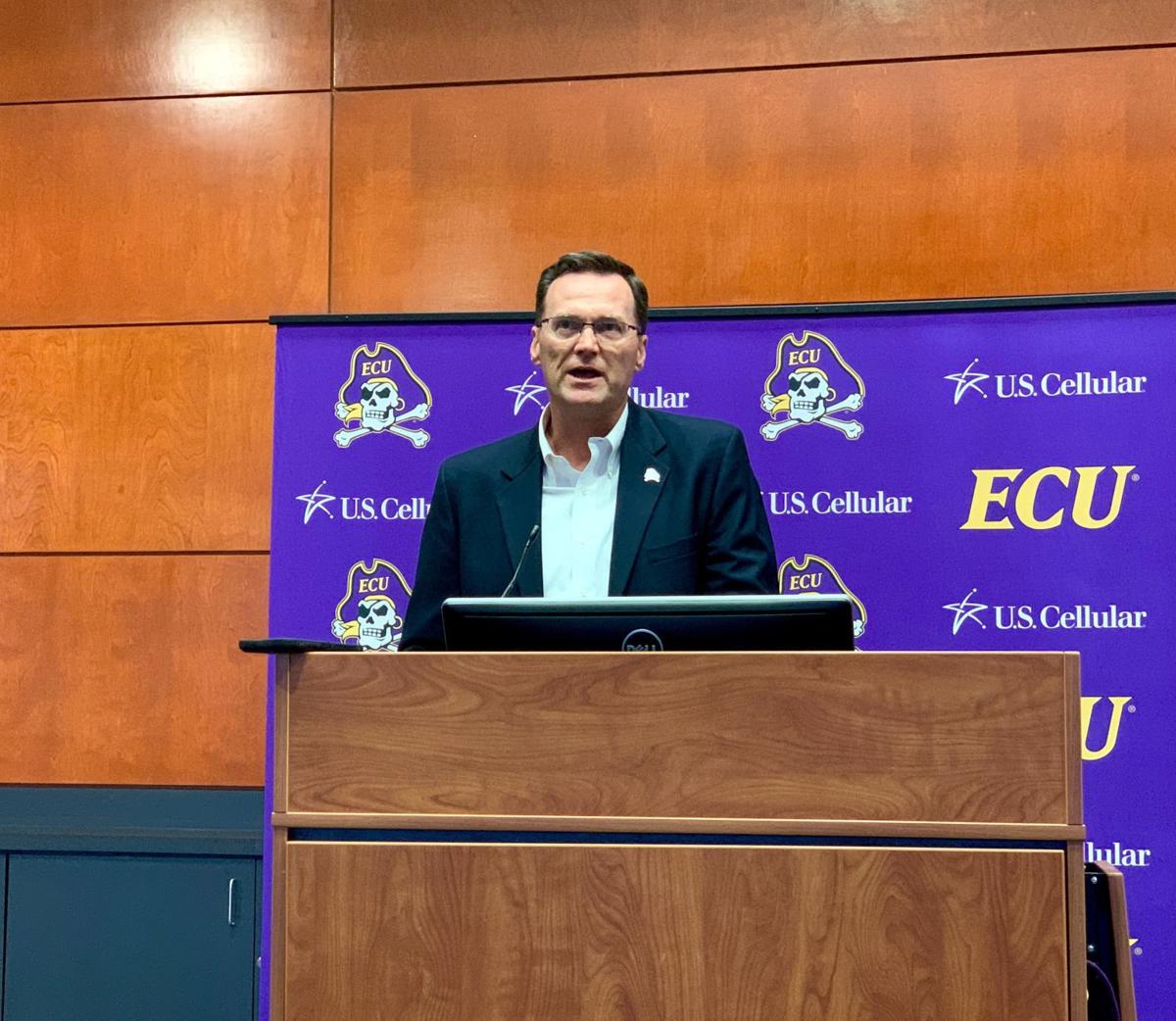 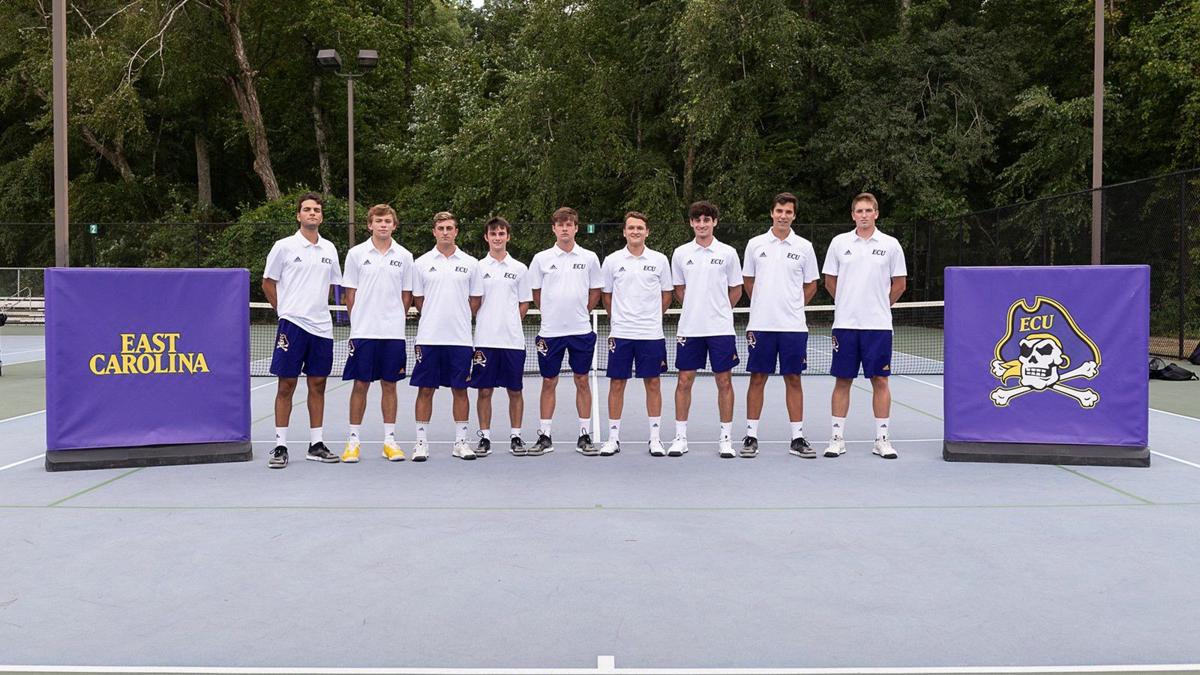 Thursday’s decision reduced the Pirates’ varsity sponsored sports from 20 to 16, which is the minimum requirement to be an NCAA Division I-A football playing member.

“It was difficult because I had to do it behind a computer screen, and I couldn’t be in the room with them and feel what they were feeling,” the second-year AD said before pausing to recollect his thoughts. “I wanted to be with them today. (Coach) Matt Jabs in swimming is one of the finest people you’ll ever meet and leads a swimming and diving program that are among our best and brightest. Matt has been a Pirate student-athlete since 2000, been here as an assistant coach and the head for the last (three) years.”

Jabs was head coach for both of the Pirates’ swimming and diving programs. ECU did not have a permanent women’s tennis coach, following the retirement of North Carolina Tennis Hall of Fame inductee Tom Morris effective March 1, and Shawn Heinchon was the men’s tennis coach. Heinchon is married to Meghan Heinchon, who is general manager for Pirate sports properties/Learfield IMG College.

In all, 68 ECU student-athletes and nine coaches were affected by the Pirates eliminating four sports as part of cost-cutting decisions that the university estimates will save $4.9 million in the long-term to help reduce the athletic department’s current budget deficit.

“Shawn and his wife have made Greenville their community and their home for the last 16 years, and for those of you who know Shawn, you know how passionate he is about the Pirates and what this community means to them,” Gilbert said. “My heart aches for those people and their assistant coaches. To the alumni of swimming and diving and tennis who helped build these programs to what they are today, words are not enough, but I apologize to you. This is not news I want to be delivering to you today. However, I understand our financial realities and that East Carolina is not able to support 20 athletic programs at this time.”

A breakdown in the ECU athletics fiscal sustainability report, which was released Monday during the first of two special Board of Trustees meetings this week, showed the Pirates sponsoring 20 sports was the most among American Athletic Conference members. Memphis, Cincinnati, Temple and South Florida all sponsor 19, Tulane 18, Tulsa, Houston and SMU 17, and UCF 16.

Recommendations in the report included the elimination of at least one sport along with other suggestions such as revising TowneBank Tower operations and pricing, and establishing funds, not to exceed $4-6 million annually, to be transferred from institutional funds in support of ECU athletics. Revenue hits from COVID-19 pushed up the timeline for making decisions.

“We were already planning to make less painful adjustments before the pandemic reached us,” interim chancellor Ron Mitchelson said. “We were intuitively aware that the existing financial model was not sustainable, and the excellent work of our sustainability committee released earlier this week confirmed our intuition with facts. The committee was clear that our financial model was not sustainable. The ongoing effects of the pandemic served to accelerate our discussions, especially in late March and into April to provide those conversations with a greater sense of urgency. There was emphasis for a need for deeper and more painful adjustments, like the elimination of sports programs.”

Mitchelson and Gilbert both cited facilities, especially with long-term financial commitments needed for Minges Natatorium, in playing large roles in deciding which sports to cut. The Pirates paid to use River Birch Tennis Center and an indoor facility on Wimbledon Drive. Gilbert said those leases will expire.

In men’s golf, for comparison, 12 of the 13 athletes were in-state and none foreign born, but Gilbert contended those statistics were not factors.

ECU athletics faced a budget deficit in the millions of dollars in recent years, partly because of three straight 3-9 football seasons from 2016-18 during a time in which former AD Jeff Compher drew blame from Pirate fans and was eventually ousted from his position.

ECU was projected for a $7.5 million deficit for this fiscal year. Gilbert said Monday that COVID-19 effects increased that estimate to about $10 million.

“What a very, very sad day,” tweeted Joran Vliegen, a professional tennis player and former Pirate. “Feeling extremely angry and frustrated because these kids and coaches should not be punished for bad leadership and bad decisions made in the past.”