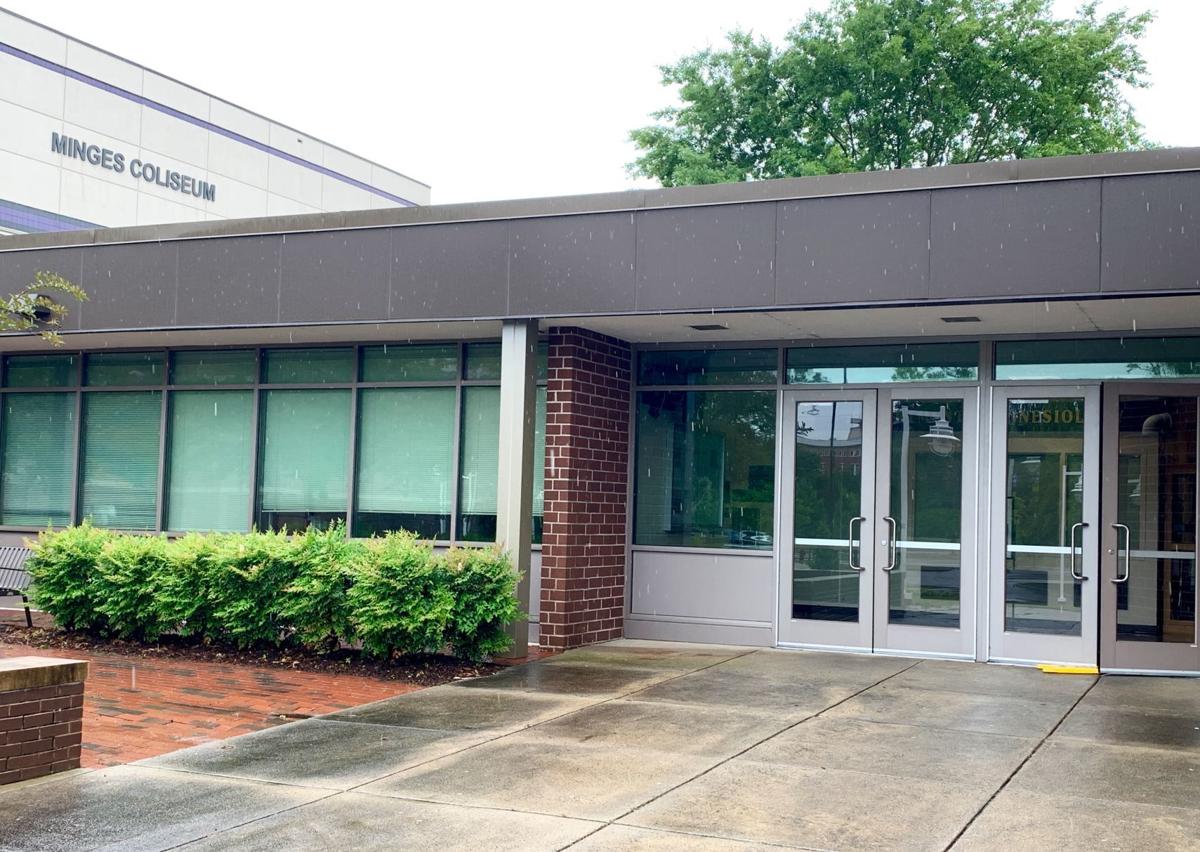 Signage for Minges Coliseum, where East Carolina plays basketball, hangs over an entrance into the Minges Natatorium area of the building. 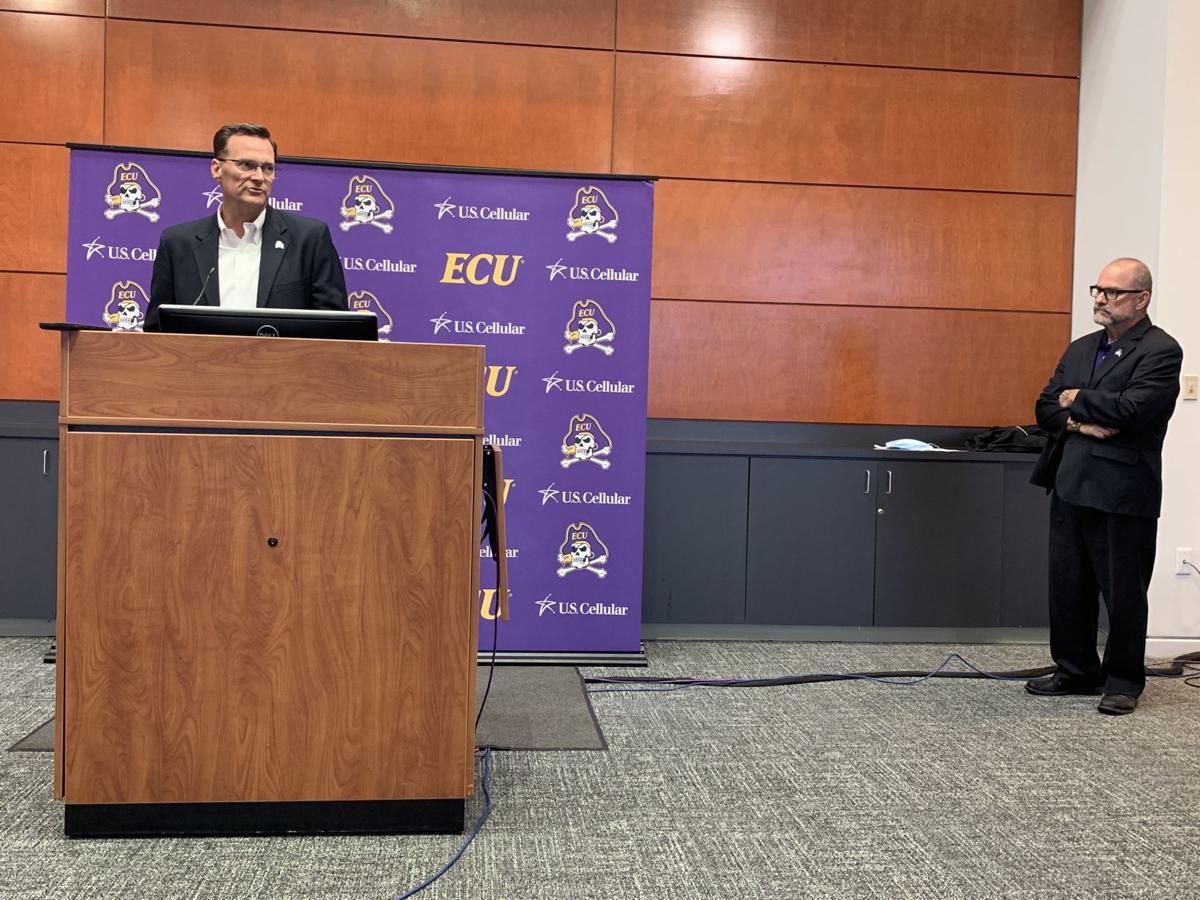 Signage for Minges Coliseum, where East Carolina plays basketball, hangs over an entrance into the Minges Natatorium area of the building.

East Carolina decided to eliminate all of its tennis and swimming and diving programs, but the process involved almost all Pirate teams being evaluated financially and for future sustainability.

Only football and men’s and women’s basketball were not under the full microscope, second-year athletics director Jon Gilbert said last Thursday during a news conference with interim chancellor Ron Mitchelson announcing the stoppage of tennis and swimming and diving.

“We ran analysis on I would say almost every sport,” Gilbert said. “We did not look at football and men’s and women’s basketball because of the ESPN TV contract, but we looked at a combination of multiple sports. I shared that with our coaches, because I wanted them to know that we looked at everything we are doing, and we’ll continue to look and evaluate. I do anticipate further financial hardships for us, so we have to continue to be mindful and efficient at what we are doing.”

Mitchelson said “no rock was left unturned” during the decision-making process. He also described ECU swimming’s home in Minges Natatorium as “an inadequate facility” from an NCAA competitive perspective.

The elimination of tennis and swimming — both men’s and women’s — lowered ECU from 20 sponsored sports to 16, which is the minimum requirement to be an NCAA division I-A football playing member. UCF is the other American Athletic Conference school at 16 sports.

ECU and then-AD Terry Holland cut men’s soccer in 2005. The Pirates, under previous AD Jeff Compher, added women’s lacrosse in 2016. The Pirates’ most recent decisions were part of a larger cost-cutting plan that includes reducing team and operating budgets between 10 and 20 percent, not filling some vacant positions and more regional scheduling. It is estimated to account for $4.9 million in long-term savings.

With swimming and diving specifically, Mitchelson and Gilbert emphasized not wanting to invest long-term in Minges Natatorium as a primary reason for eliminating those teams. Gilbert described it as a combination, for tennis and swimming, of the current state of facilities in addition to future costs.

A difficult part for him was knowing that interim women’s tennis coach Kirstin Burgess and swimming and diving coach Matthew Jabs both both are ECU alums.

“Never would I have anticipated going into it thinking because our pool is old, that is the reason we are gone,” said Jabs, an ECU swimmer from 1996-2000 who immediately transitioned into a coaching role at his alma mater. “The pool is probably in the best shape it’s been in for a long time. ... You knew there were some changes coming, and I was hopeful for 60-some years of success, and the history of our program and winning in every conferences this university has ever been a part of. ... Facilities don’t win championships, people do, and we had great people that came through this program for the history of this program. It’s a shame to see it all come to an end.”

The Pirates won the AAC men’s swimming and diving championship in Houston on Feb. 22 for the team’s fourth league title in six seasons. ECU edged Cincinnati during the final night of competition for first place among four participating teams.

Connecticut leaving the league in all sports this year and the Pirates’ decisions leave the American with only Cincinnati and SMU in men’s swimming and diving, and Houston, SMU, Cincinnati and Tulane for the women.

A lot of questions that remain at ECU and universities elsewhere center around what the next football season might look like, which will affect financial stability. The NCAA has announced that athletes in all sports can return to volunteer activities beginning June 1.

“We recover one day at a time, and what I mean by that is it’s important we get student-athletes back on campus this summer to start working out,” Gilbert said. “It’s important that we get back our student population and we are going to provide a safe environment here. We are going to go through all the protocols to make sure we are doing whatever the proper procedures are. We need students back on this campus, and I believe that will happen this fall. We need football to play in the fall. We need to get back to normal as quickly as possible, and I would say that for Greenville, eastern North Carolina, this community and this institution. We all need to have that happen as quickly as possible.”

Alumni of East Carolina’s swimming and diving program are collecting verbal pledges and bonding together in response to the Pirates’ discontinuing the sport.

In addition to emails already sent to Board of Trustees members and administrators, supporters are hoping to present the university with potential monetary support for swimming and diving.

“Our goal is to get one of the most successful athletic programs on campus back,” said Rick Kobe, who coached the Pirates for 35 years and retired in 2017. “What really all we want to do, even though the decision was made, is to see what we can do to reverse it. To me that sounds like we are going to have to come up with money. We have a fund-raise that started up (Saturday) and our goal is we want to raise $1 million, but we also want to hit $2 million. ... This is all alumni-driven, and we’ve had a program here since 1953, so we have hundreds of alums who are obviously very disappointed and confused alumni.”

An email address, saveecuswimanddive@gmail.com, is available for inquiries. A “save ECU swim and dive program” petition page also was created via change.org.

Part of the emotions of last week’s news conference was in Gilbert’s message to former and current coaches and student-athletes of the sports cut.

“Words are not enough, but I apologize,” he said. “This is not news I want to be delivering to you today. However, I understand our financial realities and that East Carolina is not able to support 20 athletic programs at this time. ... I understand the anger and disappointment these student-athletes and coaches are feeling, and to that, I say I’m sorry.”