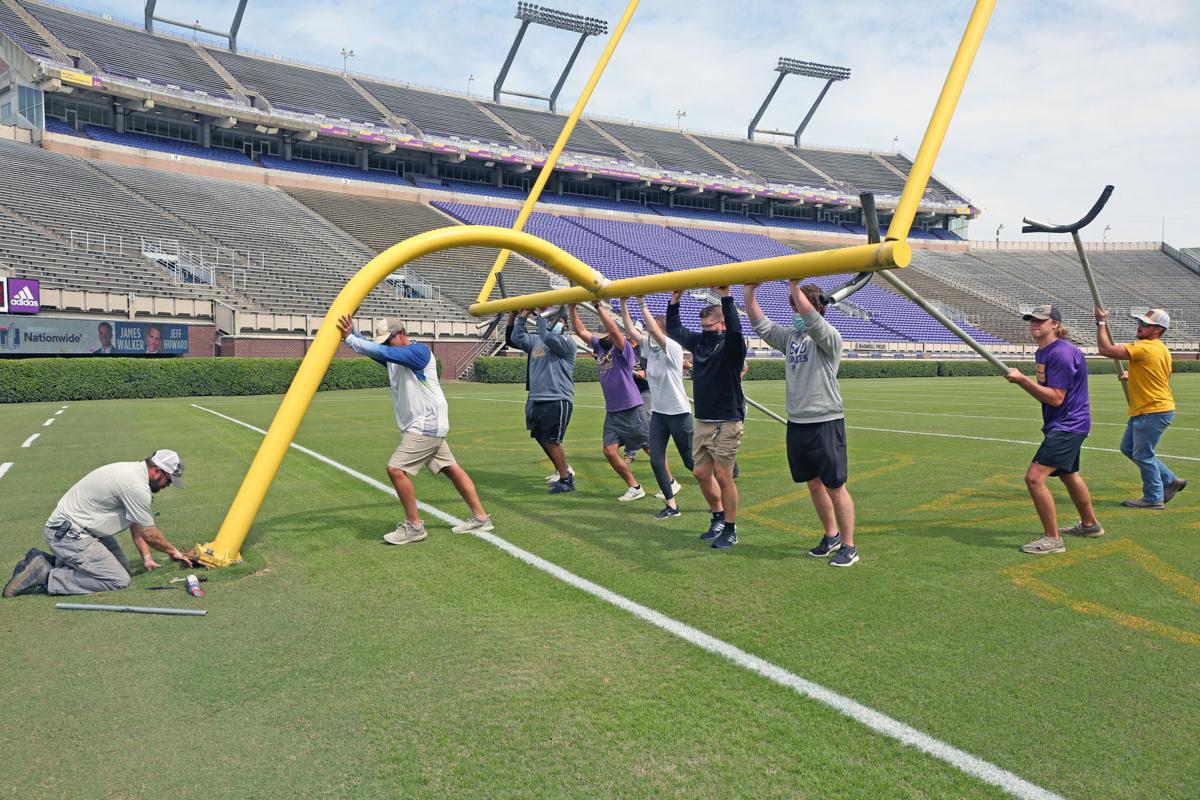 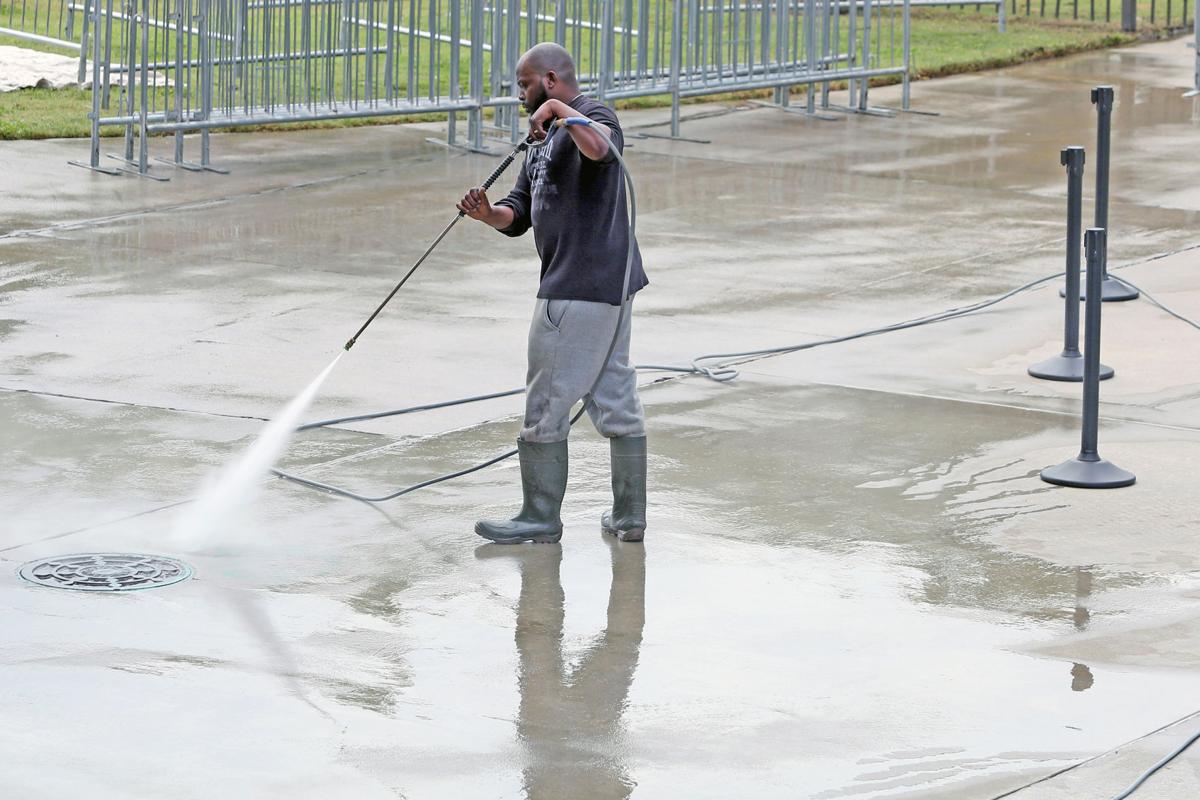 Phillip Chen washes pavement underneath stands at Dowdy-Ficklen Stadium on Wednesday in preparation for Saturday’s opening game against Central Florida. 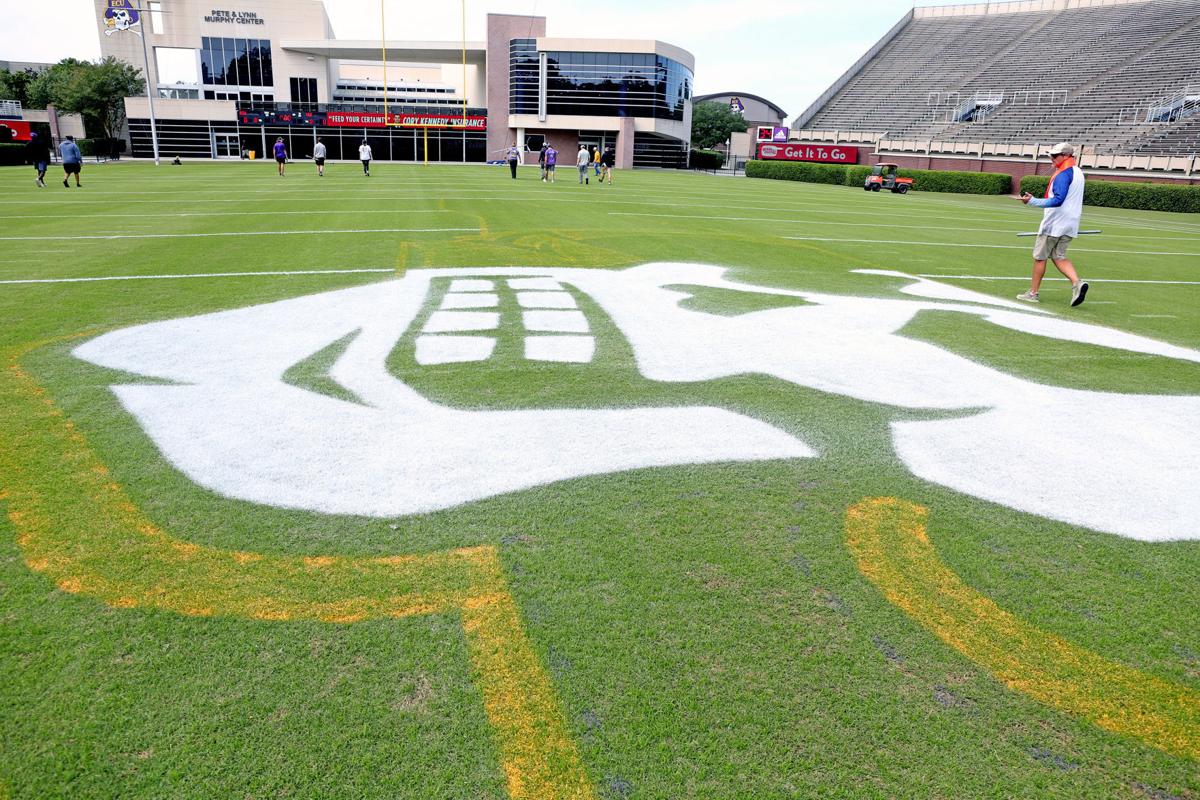 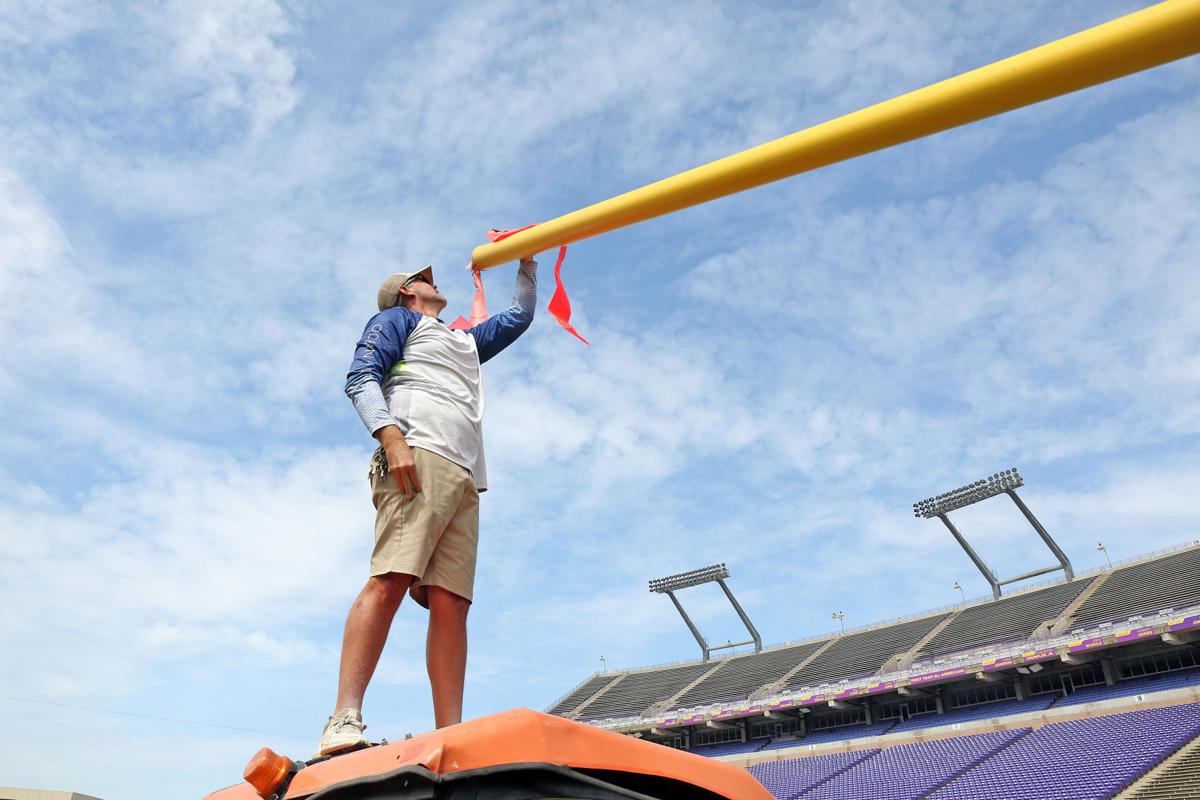 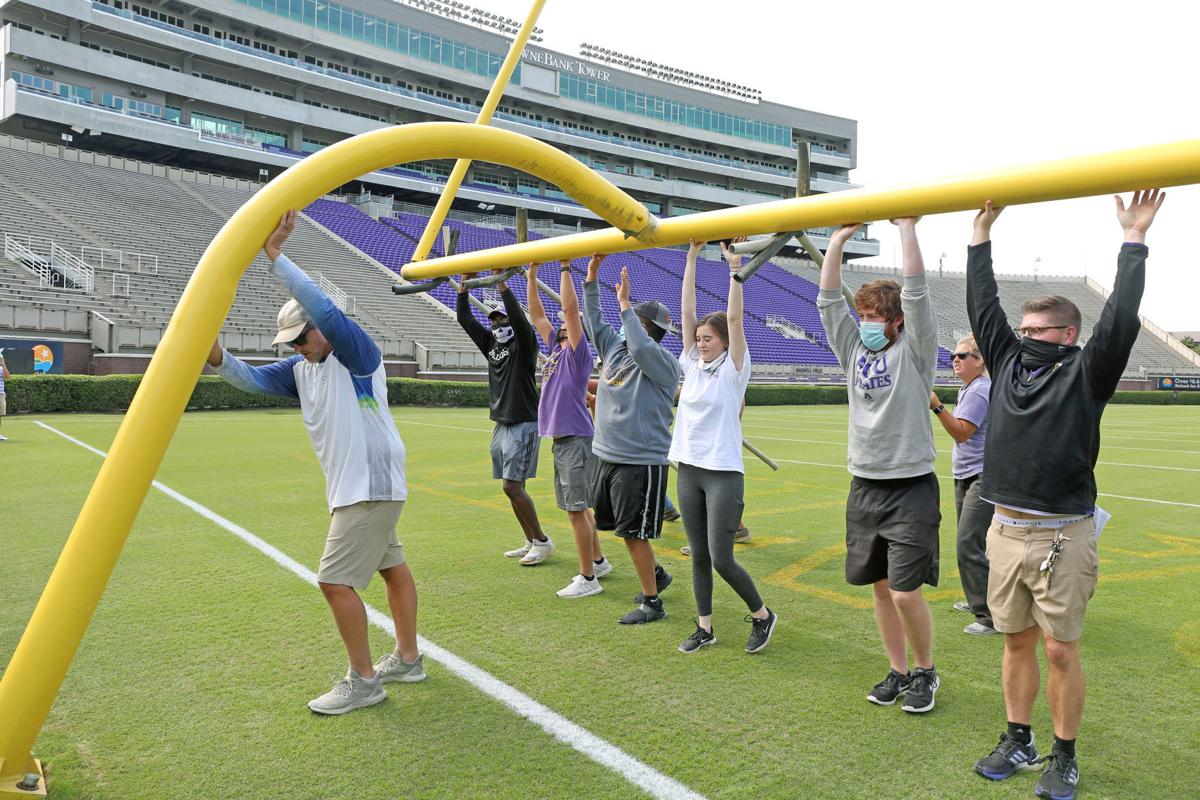 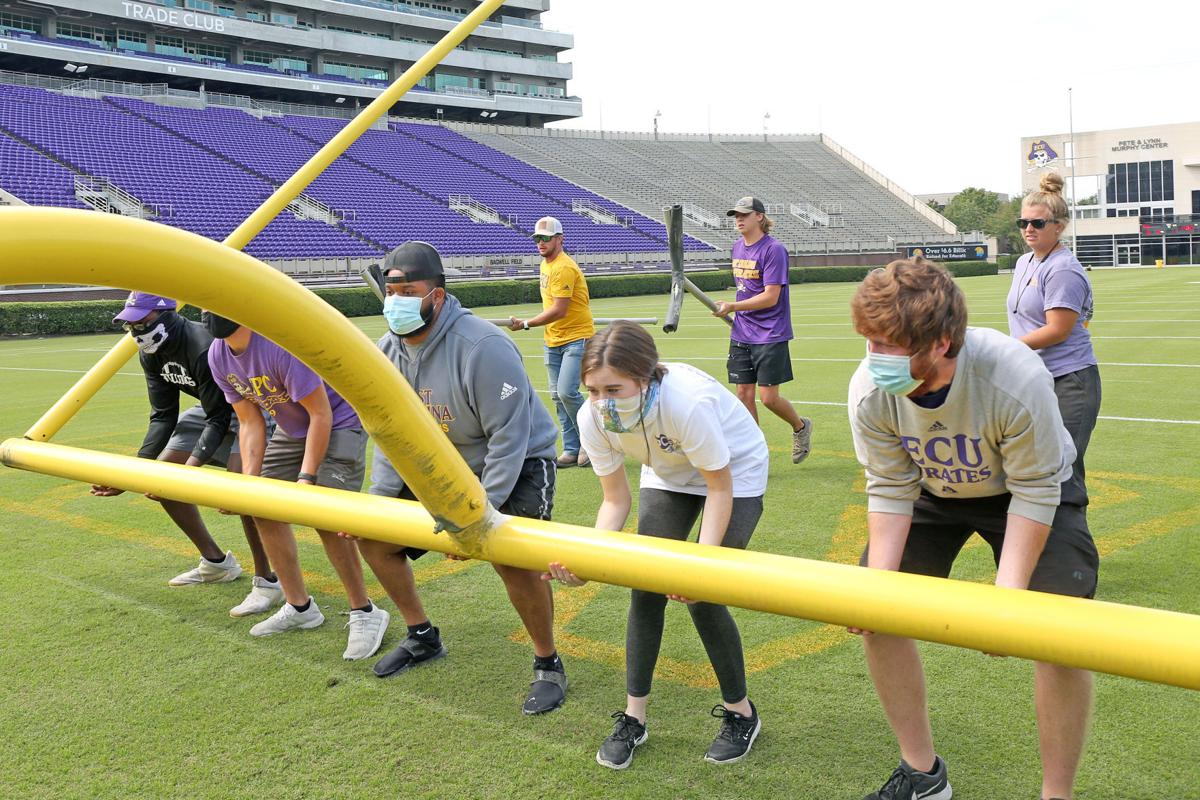 East Carolina grounds staff lowes one of the goal posts at Dowdy-Ficklen Stadium earlier this week as part of field preparation for Saturday's game versus UCF. 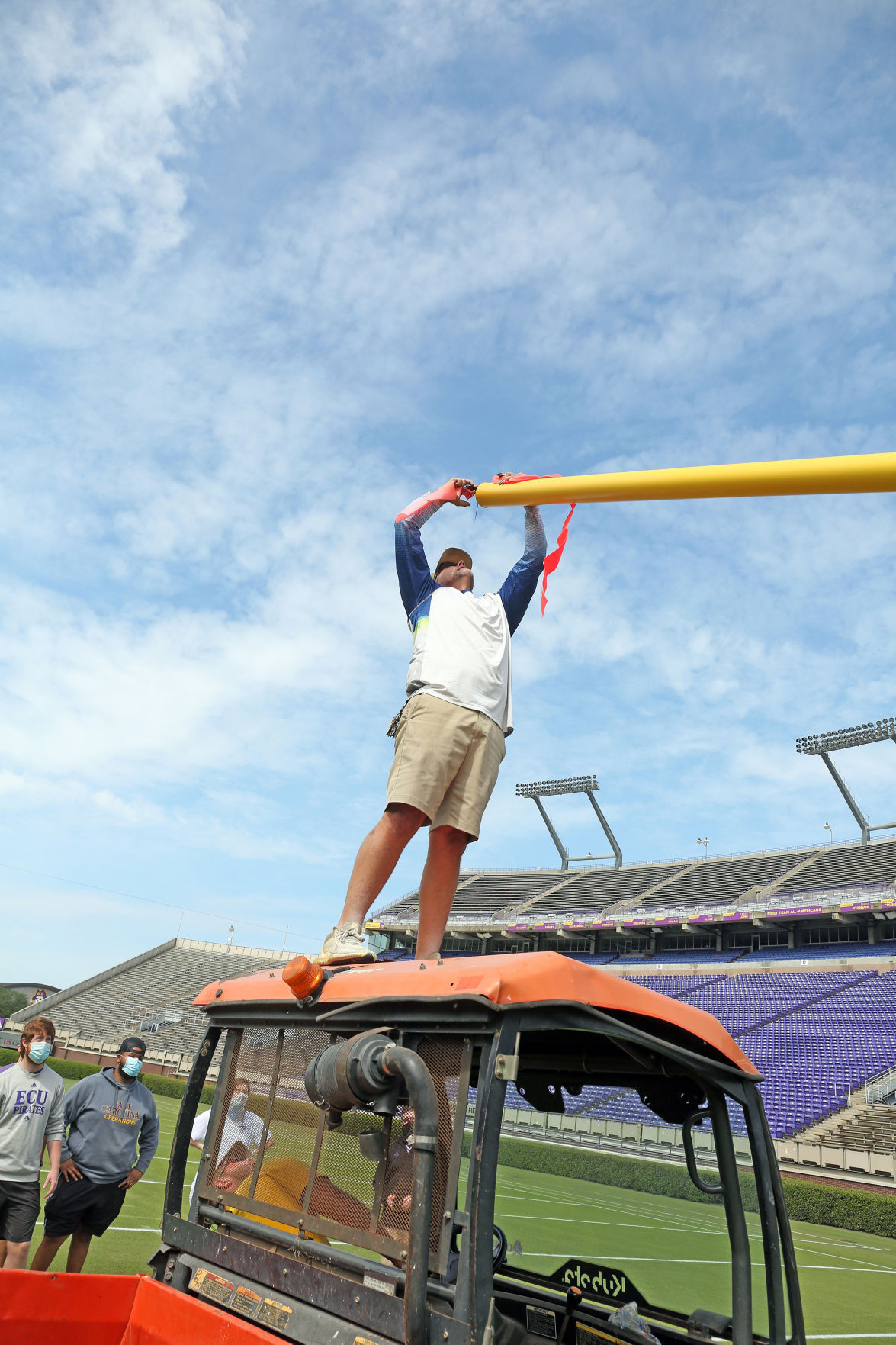 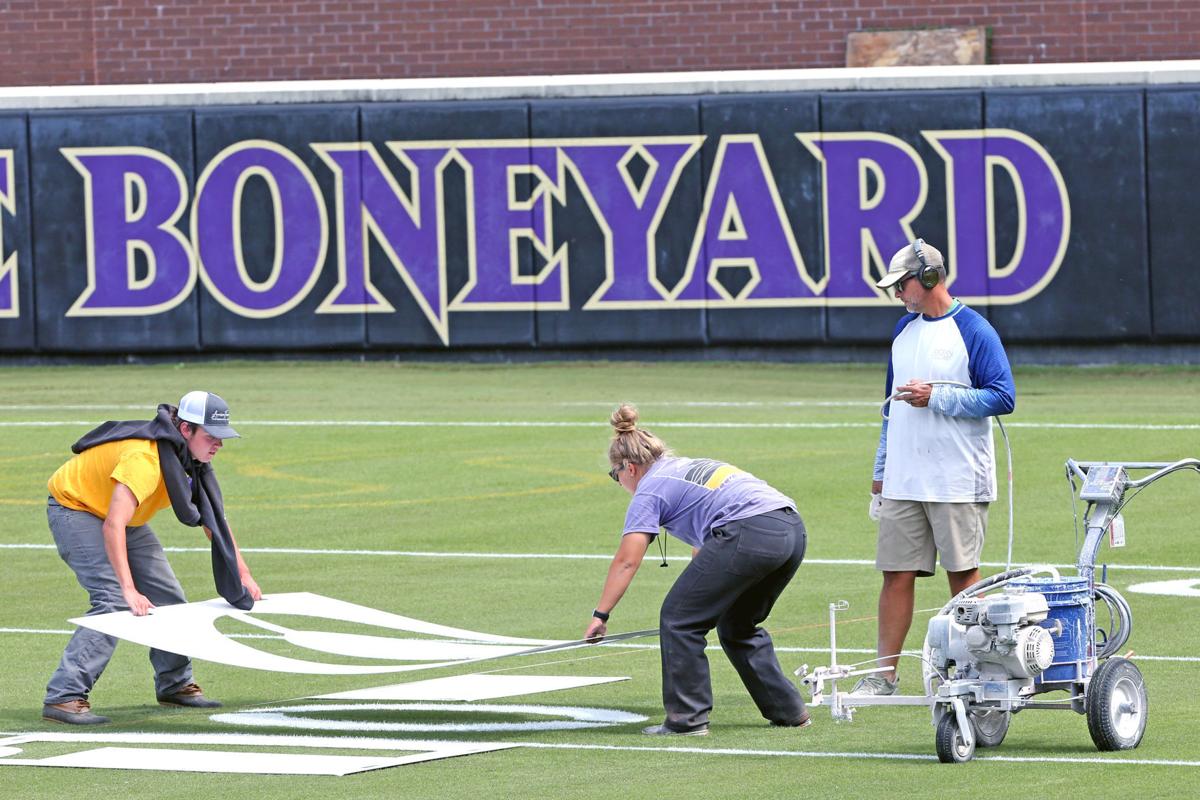 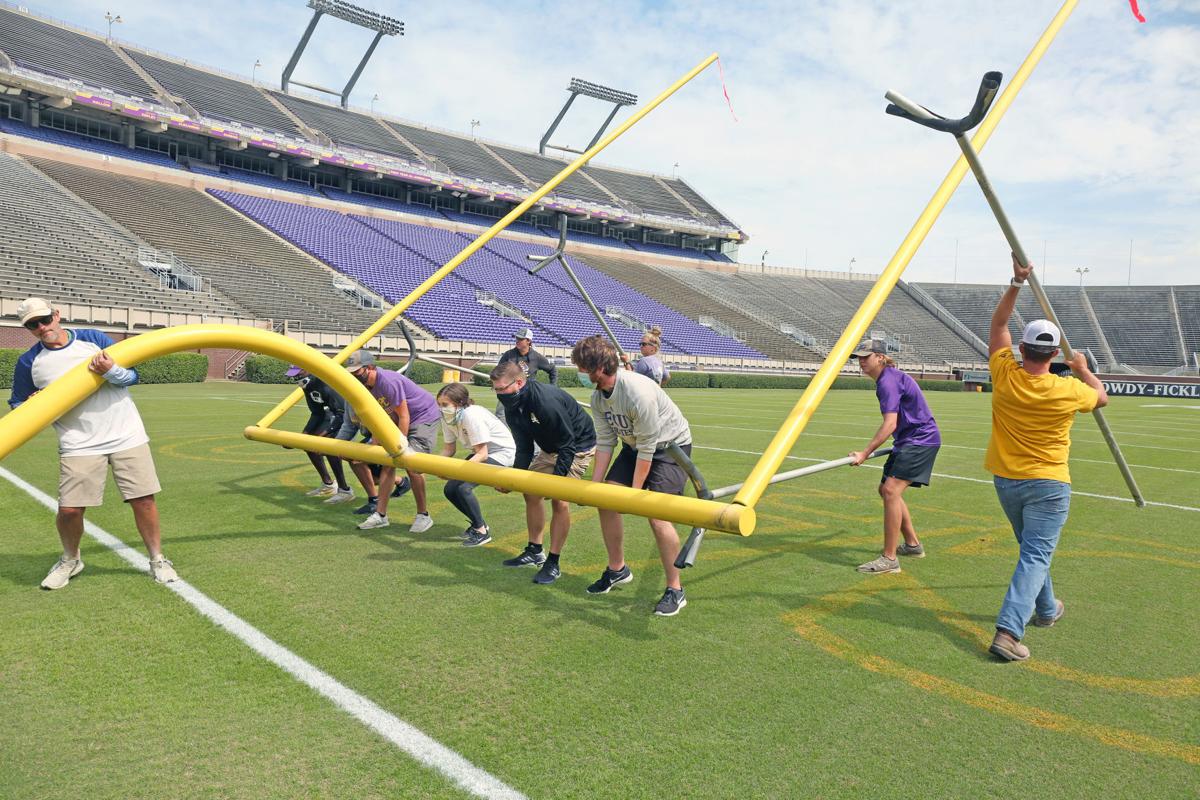 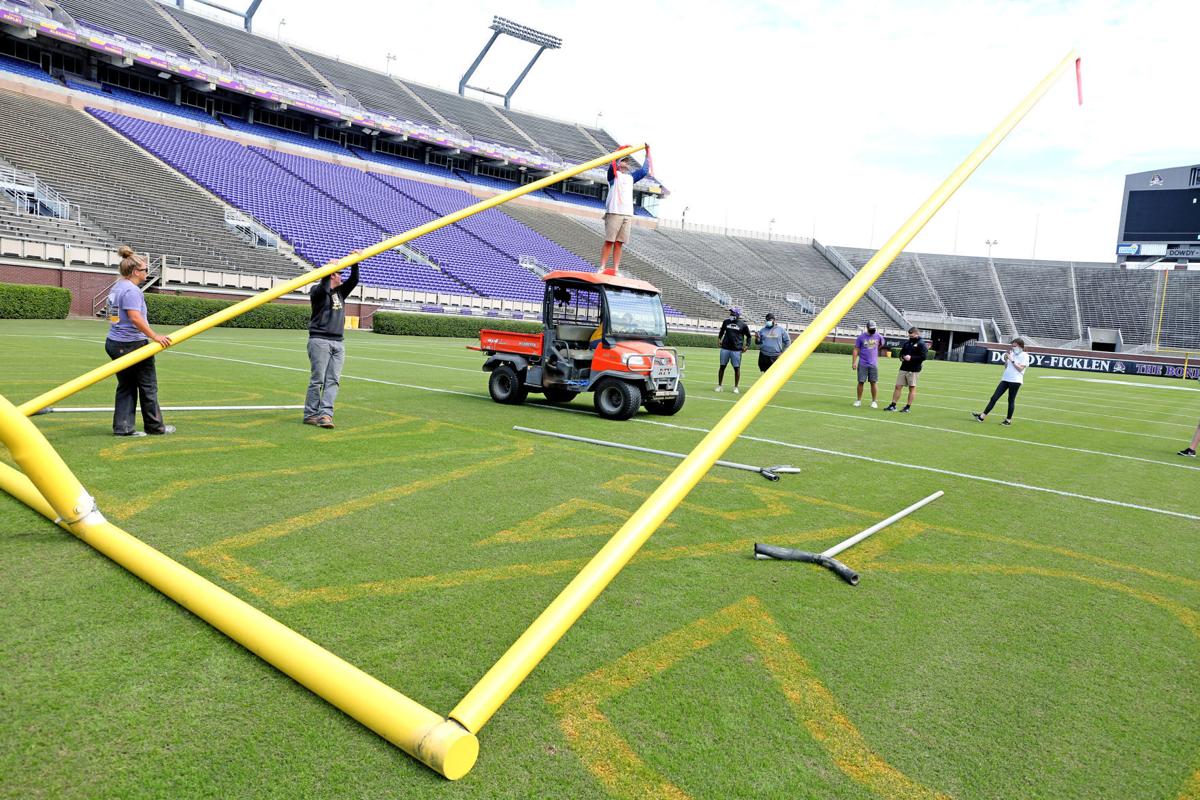 Phillip Chen washes pavement underneath stands at Dowdy-Ficklen Stadium on Wednesday in preparation for Saturday’s opening game against Central Florida.

East Carolina grounds staff lowes one of the goal posts at Dowdy-Ficklen Stadium earlier this week as part of field preparation for Saturday's game versus UCF.

It can be difficult to find normalcy this year in sports.

For Greg Pierce, East Carolina’s assistant athletics director for video services, some comfort will come on Saturday by continuing his unwavering rule that a college’s internal video production of a football game for scoreboard replays, highlight tapes and other needs must be completely separate from the TV broadcast.

Pierce’s thoughts were less clear until one week ago, when Gov. Roy Cooper and the North Carolina Department of Health and Human Services announced that family members, totaling up to 350 people, can attend games.

More details emerged for the ECU-Central Florida game on Tuesday when the Wake Forest-Notre Dame contest was postponed due to COVID-19 testing results. That led to ESPN shifting the Pirates’ noon contest Saturday versus nationally ranked UCF from ESPN-Plus designation to national network television on ABC.

The announcers for the ESPN-Plus broadcast based in Austin, Texas, were planning to receive the first available video feed from Dowdy-Ficklen Stadium and then to marry their audio input to a slightly delayed stream available only to ESPN-Plus subscribers for $5.99 per month.

Switching to ABC and one of college football’s most valuable TV slots meant ESPN sent more trucks of equipment and more people than originally expected to Greenville, including sideline reporter Paul Carcaterra.

“We toyed with the idea of not having any video on the scoreboard at all, and just have a time and clock on the board and maybe a graphic up there,” Pierce said, “but for the 350 or so people who are here, it’s worth it for us to try to make them as comfortable as possible.”

Manufactured ambient crowd noise and music will pump through stadium speakers. Replays will play on the scoreboard’s video screen. The Pirates are offering free Facebook “virtual tickets” for fans at home to watch some of the traditions and videos they would normally experience inside the venue.

It’s been a wild ride for the Pirates to get here.

The team paused practices for COVID-19 reasons in July and again in late August. ECU’s first game was scheduled for Aug. 29 against Marshall, and then Sept. 12 versus Marshall, before ultimately being postponed to an undetermined date.

The American Athletic Conference requires all of its teams to test players Monday, Wednesday and Friday during game weeks.

“I remember what it’s like in that stadium and I can’t wait until it’s like that again,” said Pirate offensive coordinator Donnie Kirkpatrick, whose first season at ECU was 2005. He was part of a home upset of No. 8 West Virginia in September of 2008, the Conference USA championship game victory the next year and was there in 2014 when a school-record crowd of 51,082 watched ECU beat No. 25 North Carolina, 70-41.

“We’ve had three scrimmages and a practice, so really, we’ve gone in the stadium four times and it’s been just us in there,” Kirkpatrick said. “We played a little bit of music and we really tried to simulate it and told them each time that this is what it’s going to be like for at least the beginning of the season. We’ve all started to kind of get used to that.

“In the press box, it’s not going to affect me, but I know it’s going to affect the team,” he said. “The guys on the sideline know they have to bring the energy and be their crowd and be the ones to pump the team up a little bit.”

Each Pirate player received two tickets to give to family members.

“We’ll have them socially distanced over a couple different sections, so when you see it on TV, you’ll see a lot of twosomes together,” said Ryan Robinson, the Pirates’ executive associate AD for external operations. “We work with our local health department and we will have a full list of everybody that was in our stadium, in case something comes up on Sunday or Monday, so we will know where everyone sat and where everybody was. We’ll also be doing temperature checks for everybody who comes in the stadium.”

The deal between ESPN and the AAC, which was announced March of 2019, includes plans for each school to receive between $6 million and $7 million annually in revenue distribution payouts — about triple what schools received in the previous contract. The deal also has ESPN fully producing all football games.

Some other games, such as basketball and baseball, will require schools to produce their own broadcast when assigned to ESPN-Plus. ECU officials are expecting that trend to start soon with basketball.

“I think fans understand the contract extension we signed with ESPN helps our athletic department and it helps our conference,” Robinson said. “Not only from a financial standpoint, but from the viewership and the branding and the national exposure we’ll get. I know it’s $5.99 per month and I don’t take that lightly. I have ESPN-Plus because I’m a sports nut, but it has a lot more than just games.”

The Pirates received funds to upgrade their control room inside Dowdy-Ficklen Stadium, which soon will be the production hub for all of their non-football broadcasts.

“ESPN expects you to use it for that,” said Pierce, who is planning with assistant director of video services Brandon Smith to shadow ESPN-Plus productions at Duke and N.C. State before basketball games begin at ECU. “They gave us a big chunk of money at the end of last year to put toward the construction of our control room, and we definitely have taken advantage of every dollar of that.

“No fan is going to pay the $6 per month to have a crappy product, and we don’t expect them to,” he said.

After a 49-21 win over Georgia Tech last Saturday, UCF’s starting quarterback said the 13th-ranked Knights have the best team in the state of Florida — thus proclaiming they are better than No. 5 Florida and No. 12 Miami.

Thousands of Pirate fans will be rooting, virtually, for a major upset victory. Thousands more college football fans might join in rooting for that possibility while watching the ABC broadcast from a mostly empty stadium.

“UCF is one of the top teams in the country, which we saw witness of that last weekend when they took on a much-improved Georgia Tech team, who I watched at Florida State the weekend before go get a win in Tallahassee,” said Mike Houston, Pirate second-year head coach. “It’s a tough opponent coming in here. ... We get a chance to start off with them at home, so it’s an exciting matchup for our players. They are excited about it. We can’t wait to get out on the field.”