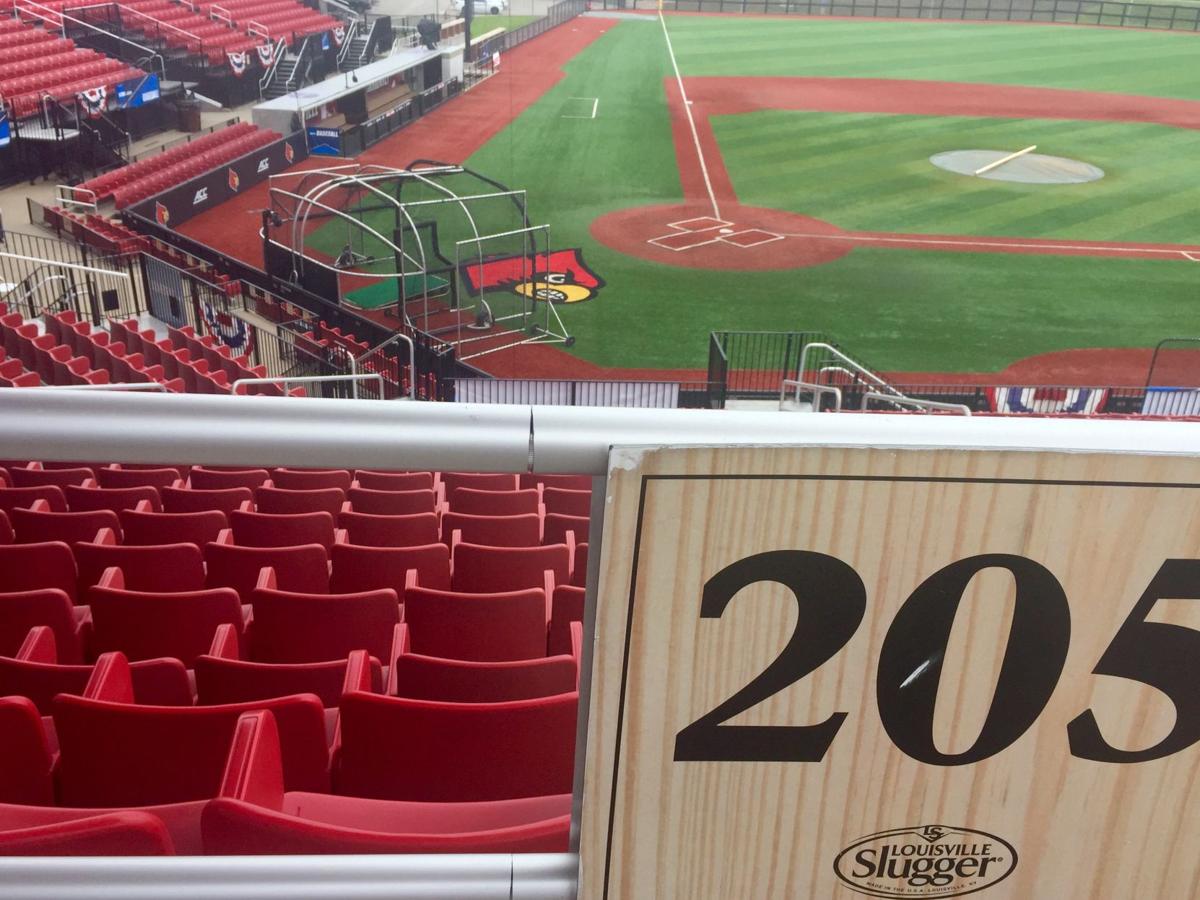 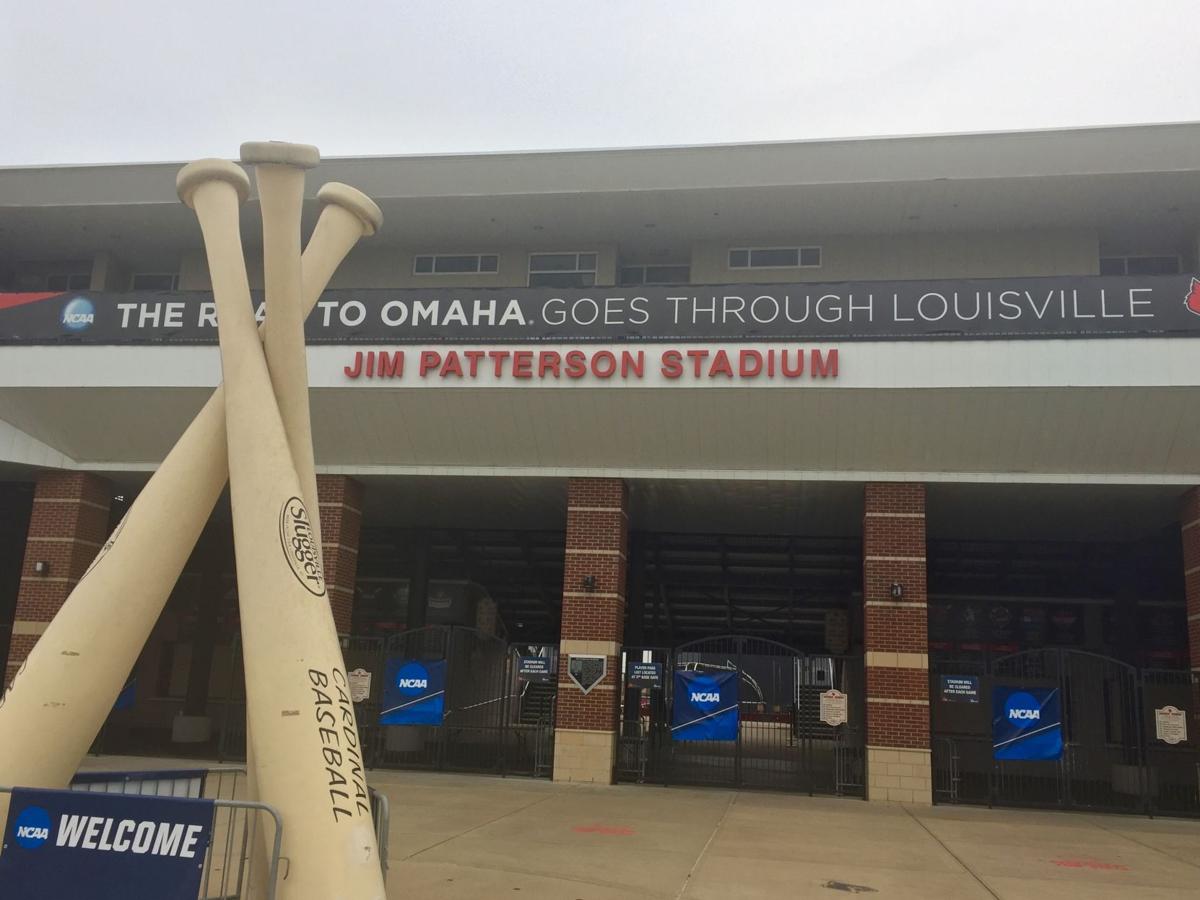 The entrance to Jim Patterson Stadium in pictured in Louisville, Ky., on Thursday afternoon. 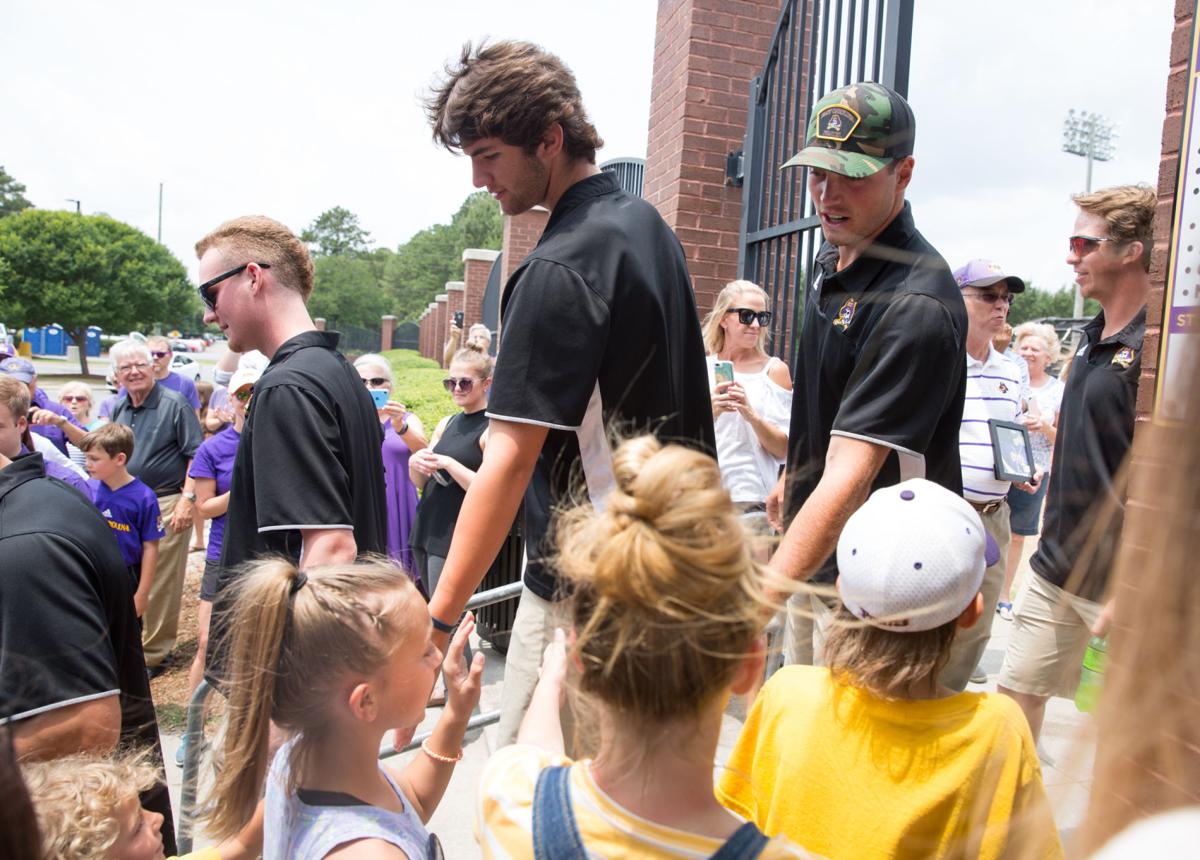 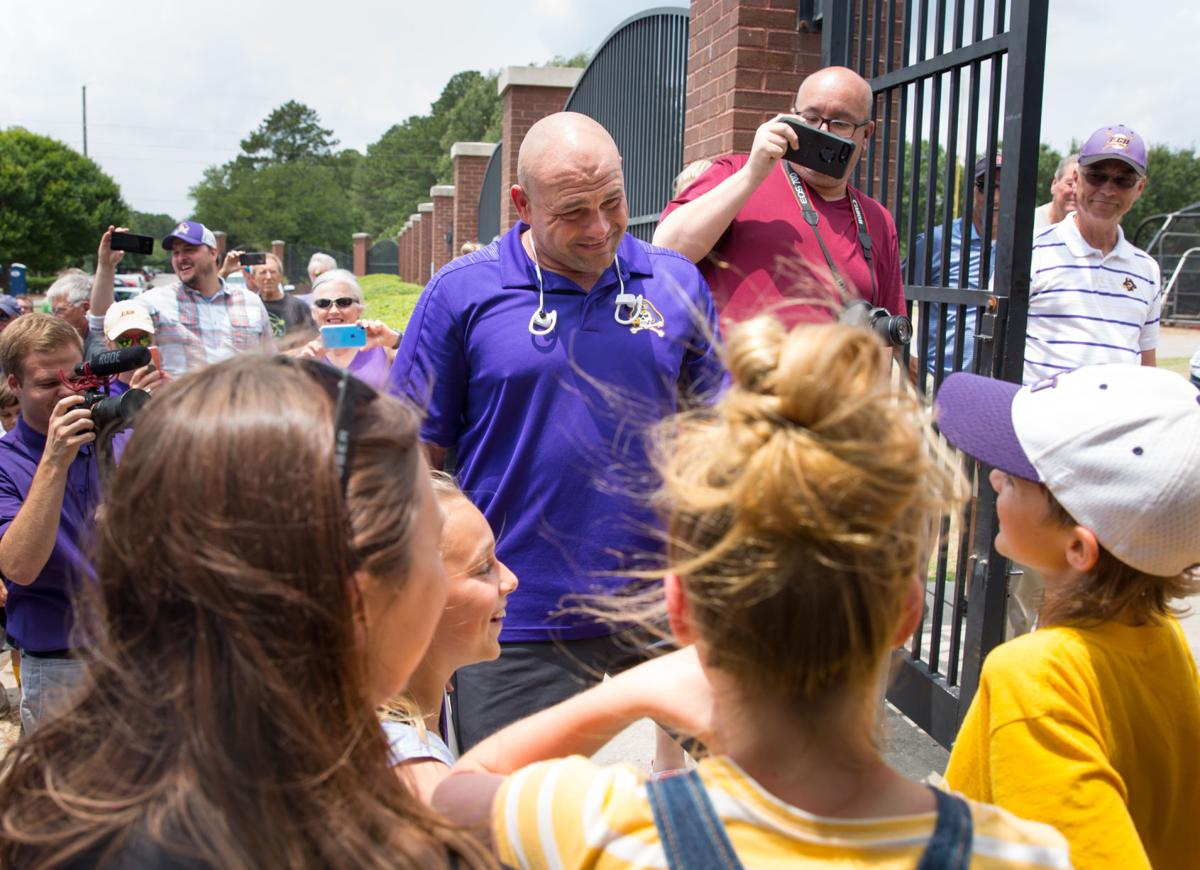 East Carolina baseball head coach Cliff Godwin talks to fans before getting on the bus in the parking lot at Clark-LeClair Stadium as East Carolina left to Louisville on Wednesday for an NCAA super regional. 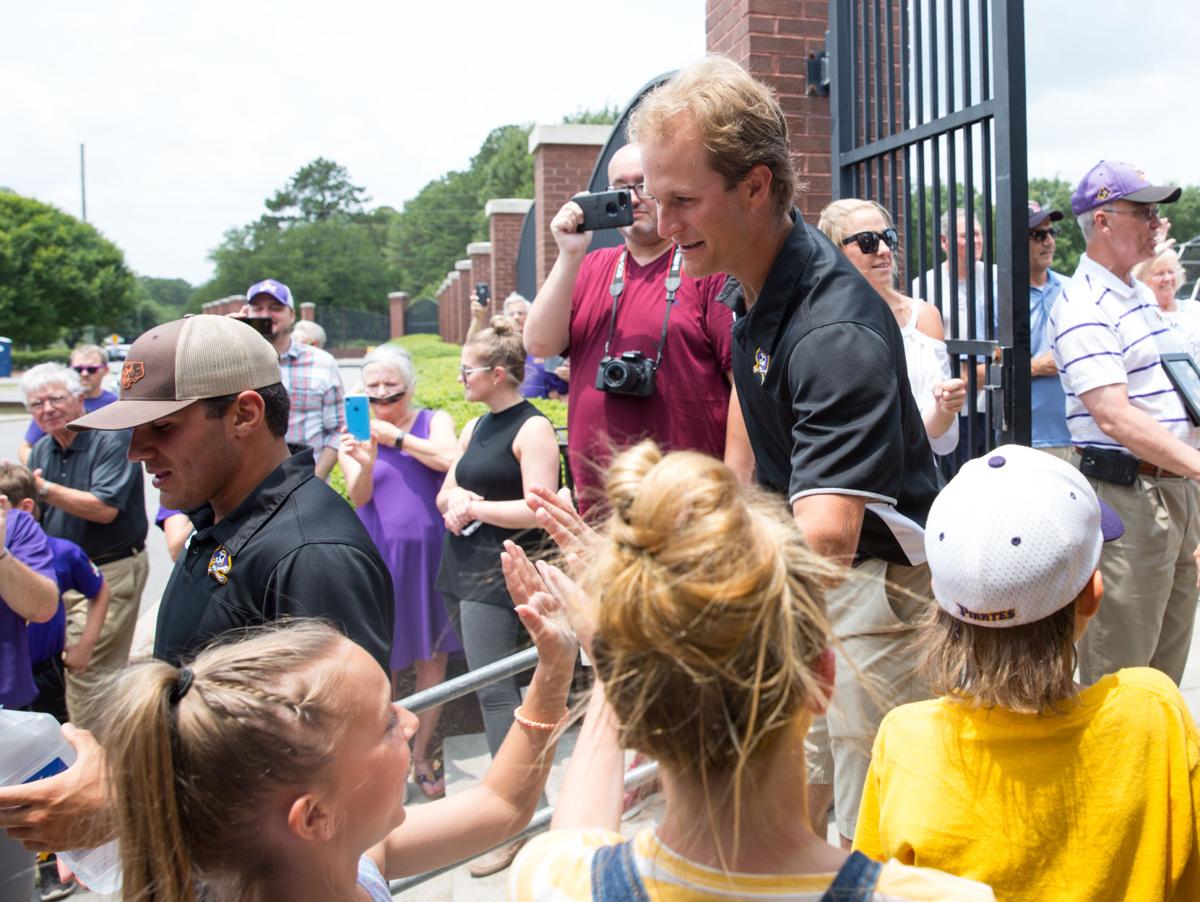 East Carolina baseball players Jake Agnos, left, and Nick Barber high-five fans as they get ready to leave Clark-LeClair Stadium on Wednesday for Louisville to play in an NCAA super regional.

The entrance to Jim Patterson Stadium in pictured in Louisville, Ky., on Thursday afternoon.

East Carolina baseball head coach Cliff Godwin talks to fans before getting on the bus in the parking lot at Clark-LeClair Stadium as East Carolina left to Louisville on Wednesday for an NCAA super regional.

East Carolina baseball players Jake Agnos, left, and Nick Barber high-five fans as they get ready to leave Clark-LeClair Stadium on Wednesday for Louisville to play in an NCAA super regional.

It is a historical and even monumental task for any East Carolina team at this point in the NCAA baseball tournament, but the Pirates are back in a super regional, and this team is tasked with winning a best-of-three super regional series at Louisville to make ECU’s first College World Series.

ECU (47-16), which won all four of its games Sunday and Monday at Clark-LeClair Stadium to survive, advance and win the Greenville Regional, has been ranked as a top-10 team for almost all of the season. Louisville, the Atlantic Coast Conference regular season champion and the NCAA No. 7 overall seed, also had to fight through the losers’ bracket to win its regional.

The Cardinals and Pirates have matching 47-16 records. ECU had seven players selected in this week’s Major League Baseball draft, and the Cardinals had eight.

The stage is set. The winner goes to Omaha, Neb., for the eight-team College World Series.

No. 10 ECU arrived in Louisville on Wednesday and held its official NCAA practice Thursday, albeit earlier in the afternoon than originally scheduled because of inclement weather that could continue to be a weekend theme.

“I thought our guys, once we got going, were really energetic and flying around the field after basically having two days off after a hard-fought regional,” ECU coach Cliff Godwin said after Thursday’s practice.

First pitch for Game 1 of the series is at noon, to be televised on ESPN2.

Louisville has been to Omaha four times, including in 2013, ’14 and ’17. The Pirates, making their 30th NCAA appearance this year, have made the NCAA tournament the most among teams that have never reached the CWS.

There is always pressure on the Pirates in the postseason, which has led to a candid Godwin — an ECU alum in his fifth season leading the Pirates — in his public comments beginning last weekend as his team was fighting through to win its regional.

We put in the work today and will be ready for tomorrow.

Both teams will pitch their ace in the opener, creating a matchup of two of the top left-handed hurlers in the nation in Pirate junior Jake Agnos and Louisville sophomore Reid Detmers.

Agnos (11-2, 2.02 ERA) has struck out eight or more batters in 12 of his 16 starts. Detmers, who has 156 strikeouts in 100.1 innings, went seven innings last weekend versus Illinois State in a loss, and he fanned 11 while yielding four runs on three hits with three walks.

“I was focused on just getting a good practice in and getting my throwing in, because it was a quick turnaround since (pitching against) N.C. State (on Sunday),” Agnos said. “We’re jacked up and we’re pumped. I know the guys are going to be full of energy and the crowd will have energy. I’m excited and honored to get the ball for Game 1.”

Louisville’s strengths include a bullpen with five relievers with an ERA of 2.70 or lower, although hard-throwing closer Michael McAvene is suspended the first two games of the super regional after a controversial suspension during the regional round for disputing a call by an umpire. Six-foot-6 lefty Michael Kirian has four saves and a 1.59 ERA in 28.1 innings.

The teams are similar on offense, where the Pirates boast hot-hitting catcher Jake Washer (the Greenville Regional MVP) now at 17 home runs for the season and Spencer Brickhouse with 13 homers and 55 RBIs. Alec Burleson, who also is in line to be a key pitcher for ECU this weekend, has a .373 batting average, nine home runs and 61 RBIs.

Louisville could put pressure on Washer and the Pirate pitchers with its aggressiveness and quickness, entering Friday at 106-of-131 on stolen base attempts. Tyler Fitzgerald (.321 batting average) is 18-for-23, and Justin Lavey is 19-of-22.

After ECU surprisingly lost its regional opener to Quinnipiac on Saturday, the regional hosts won their final four games by a combined 44-11 score.

“It was really good to put up nine or more runs in those games, so if we can take that momentum to Louisville and with our pitching staff, then I don’t think we will lose,” leadoff hitter Bryant Packard said.

The Pirates are 1-8 all-time in super regional games. Their only win was for Game 1 at Texas Tech in 2016.

ECU is 19-8 in road games this year, highlighted by a 9-5 win at North Carolina on May 8 when Washer hit a grand slam in the first inning. The Cardinals are 31-8 at home.

“This is an exciting time of year and when you start the season, you hope to make it to this point and be one of the 16 teams still playing,” Louisville coach Dan McDonnell said during Thursday’s news conference. “I’m just really proud of this group and excited to get to to play this weekend and to play at Jim Patterson Stadium. ... I know we are playing a really good East Carolina team that has won a lot of games and with Cliff Godwin, I’m sure they expect to be here as well.”