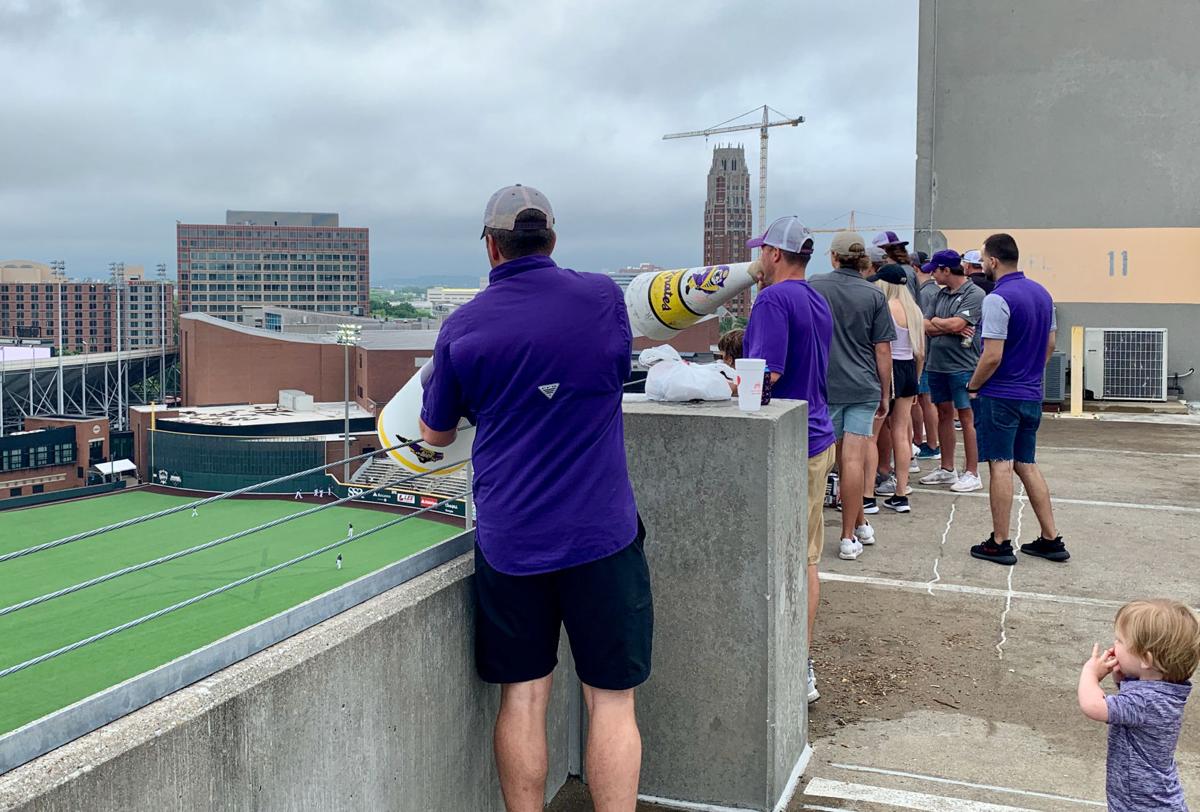 East Carolina fans yell out a purple-gold chant from a parking garage overlooking Hawkins Field on Friday morning in Nashville, Tenn., before Game 1 of the ECU-Vanderbilt NCAA super regional series. 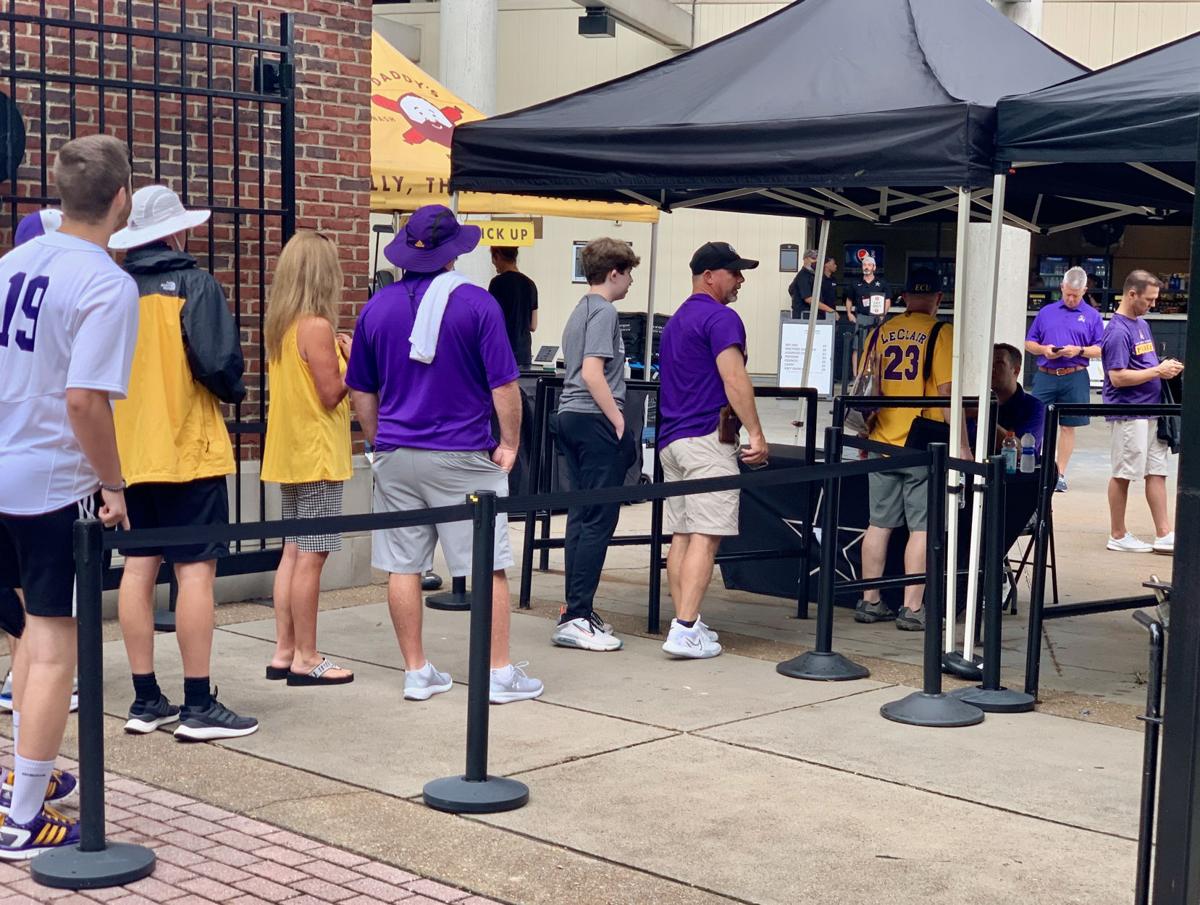 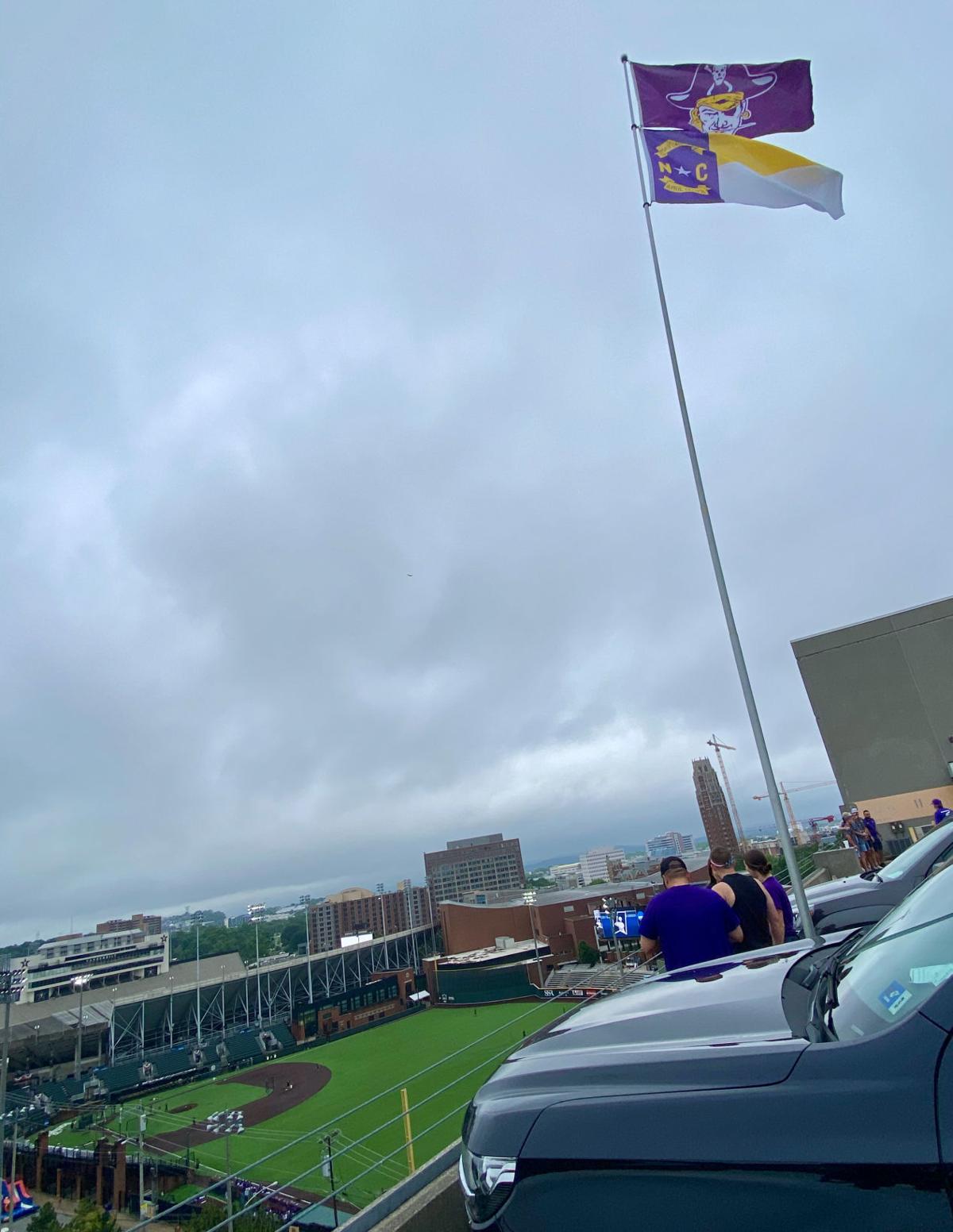 East Carolina fans yell out a purple-gold chant from a parking garage overlooking Hawkins Field on Friday morning in Nashville, Tenn., before Game 1 of the ECU-Vanderbilt NCAA super regional series.

NASHVILLE, Tenn. — East Carolina baseball fans on Friday took over the top level of a parking garage overlooking Vanderbilt's Hawkins Field a few hours before first pitch of the NCAA baseball super regional series between the Pirates and Vandy.

The Pirate tailgaters lacked the numbers they had a week ago at Clark-LeClair Stadium for the Greenville Regional, but what they lacked in quantity they made up for with volume as they belted out "Purple ... Gold" chants with their purple-and-gold megaphones straight from the Jungle.

"We figured we would bring a little bit of The Jungle to Nashville," said Jared Plummer, 40, a longtime Pirate fan who leads cheers and chants among the Jungle's fans behind the outfield for games at Clark-LeClair Stadium.

The group of traveling tailgaters included parents of ECU players.

Cam Colmore, a Winterville native, and Matt Bridges, from Shelby, are ECU's only sixth-year seniors. Their parents have become good friends and followed multiple postseason trips, including when Kelly Bridges watched her son serve as a key freshman pitcher for the Pirates at the 2016 Lubbock Super Regional won by Texas Tech in three games.

"We hope we are the victors this time," she said. "These parents are all a family, and we try to indoctrinate the freshman parents when they come in so they continue to carry it on. The Jungle is where the greatest fans are and they have accepted us. ... It's like a fraternity, and everybody is on the same page."

The goal of that fraternity is to gather again next week in Omaha, Neb., for the College World Series. The 2016 super regional was the closest ECU has ever been. The Pirates have made the most NCAA tournaments, 31, among teams never to reach Omaha.

Vanderbilt has an edge in the best-of-three series over the Pirates after Friday's 2-0 win. Today's game is scheduled for noon on ESPN2 and will eliminate the Pirates if they lose.

Joining the Colmore and Bridges families on Friday were the parents of freshmen first baseman Josh Moylan. All of the parents were proud to be in Nashville rooting on their sons.

"We have been blessed to be part of this," Brett Bridges said. "It's been six years and I kind of wish it could be 10 if we could. ... This is bittersweet for us because it is the last ride, but this is a special group of guys and a special team. We're just excited about it and excited to have the opportunity to be right where we are at."

Some Pirate fans arrived in Nashville on Wednesday or Thursday to get acquainted with the city and Vanderbilt campus. Others drove the nine hours and 30 minutes from Greenville overnight Thursday to make it before Friday's noon game.

ECU received an official allotment of 600 tickets. Others had to attain tickets via secondary markets. The capacity of Hawkins Field is 3,700, which is less than the Pirates' Clark-LeClair Stadium with a capacity of about 5,000.

"We left at about 6:15 p.m. (Thursday) night and got in around 3 a.m. local time," said Jonathan Wagner, an ECU spring semester graduate who also travelled to Clearwater Fla. to watch the Pirates play in the American Athletic Conference tournament last month.

"We are pumped to be here. We made the trip to Clearwater and we are even more excited for this one. This team is special and I’m glad that we’ve been able to be here with them for the ride."