Log In Sign Up
You are the owner of this article.
Edit Article Add New Article
You have permission to edit this article.
Edit
News
Opinion
Sports
Features
Obits
Multimedia
Local Events
Jobs
Classifieds
e-Edition
Our Sites
Extras
Share This
1 of 14 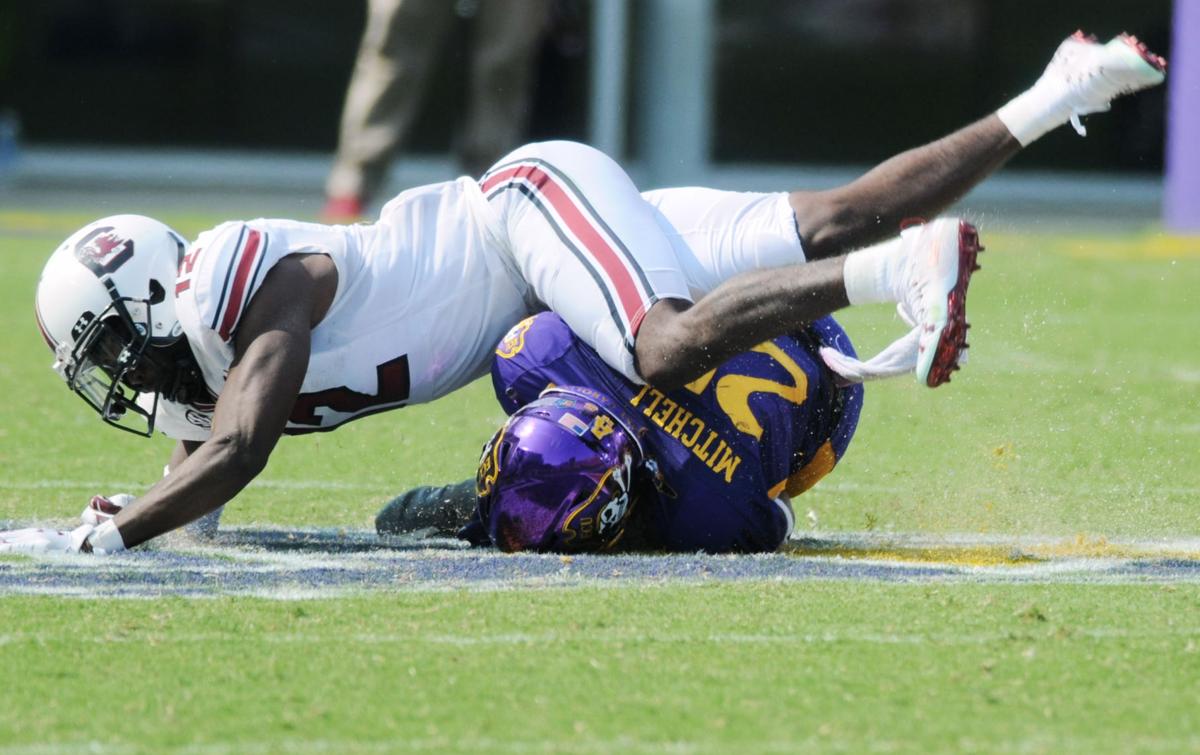 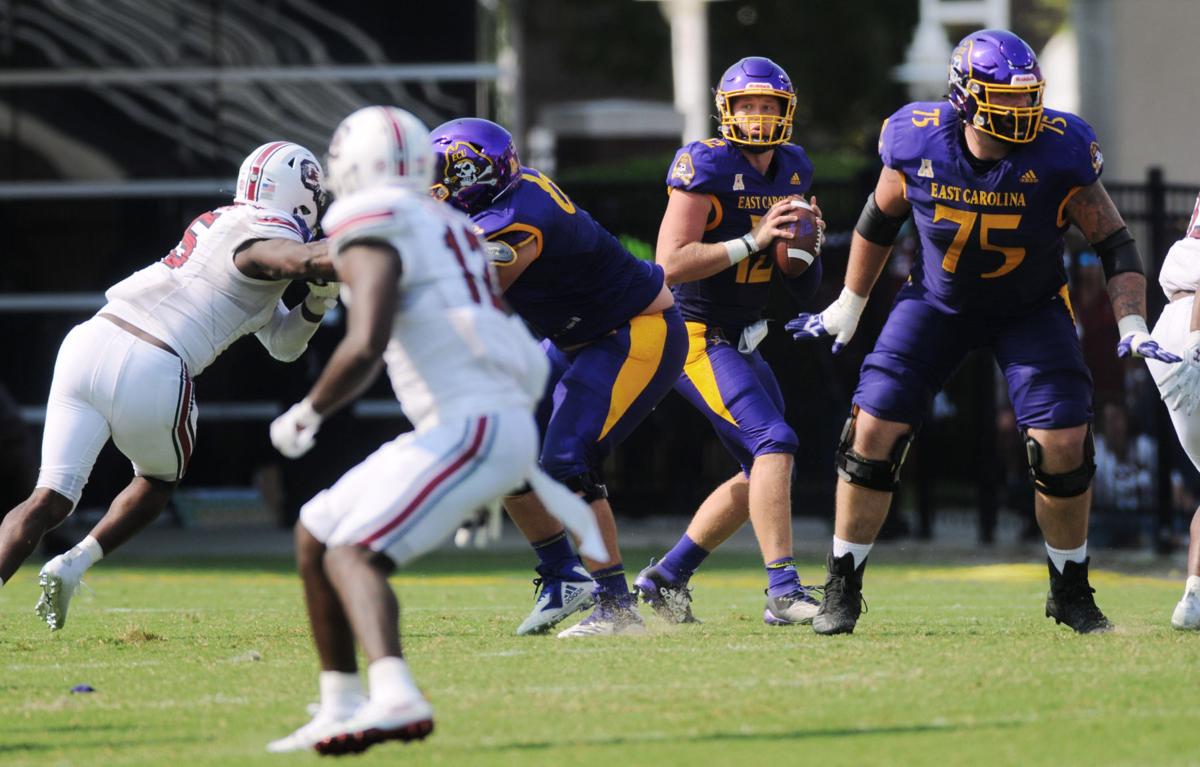 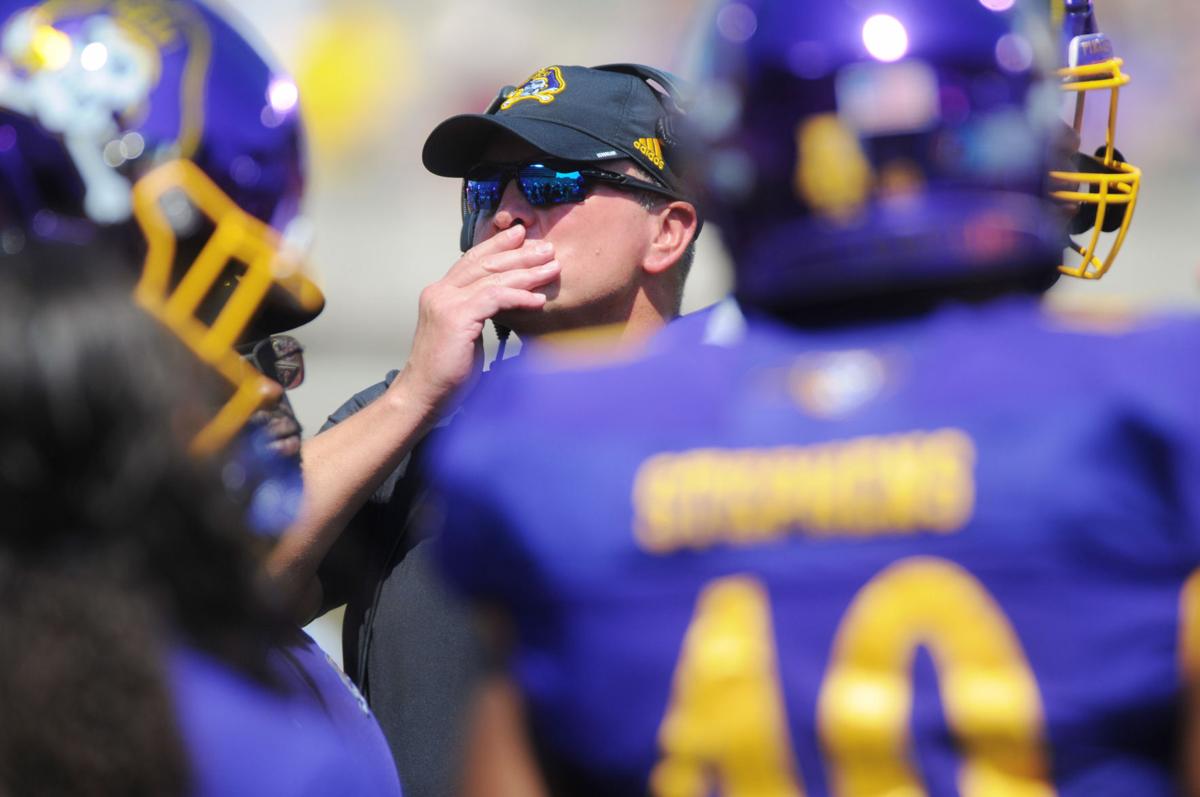 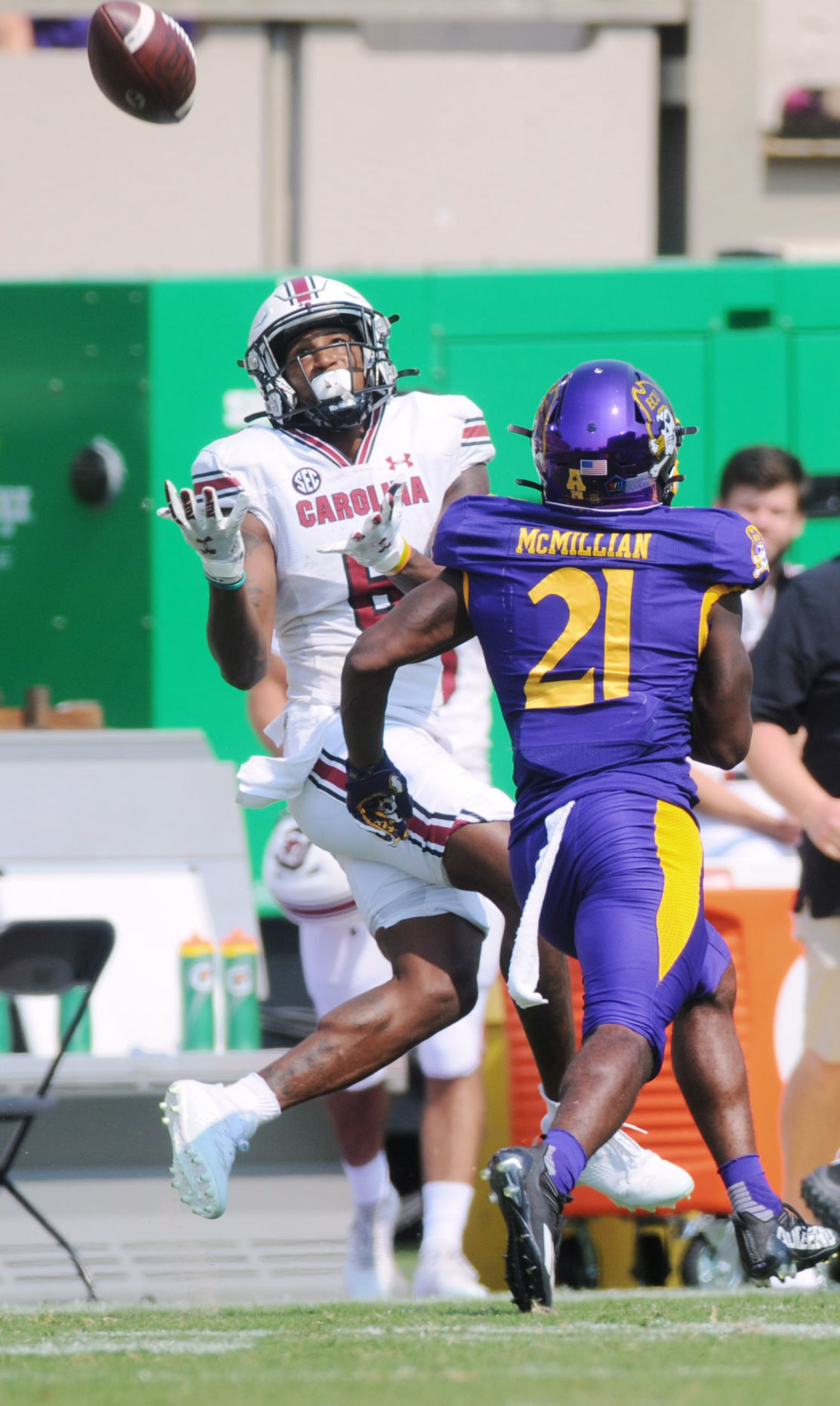 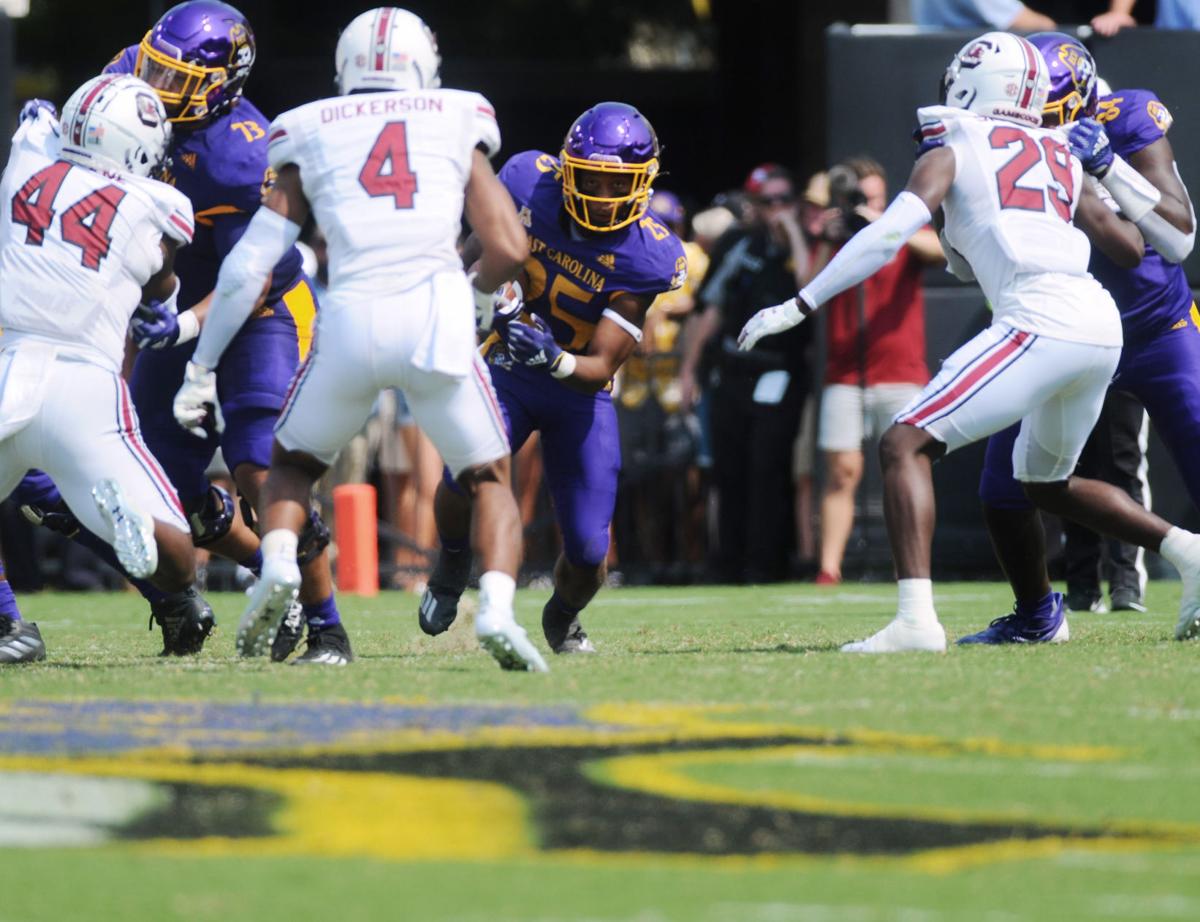 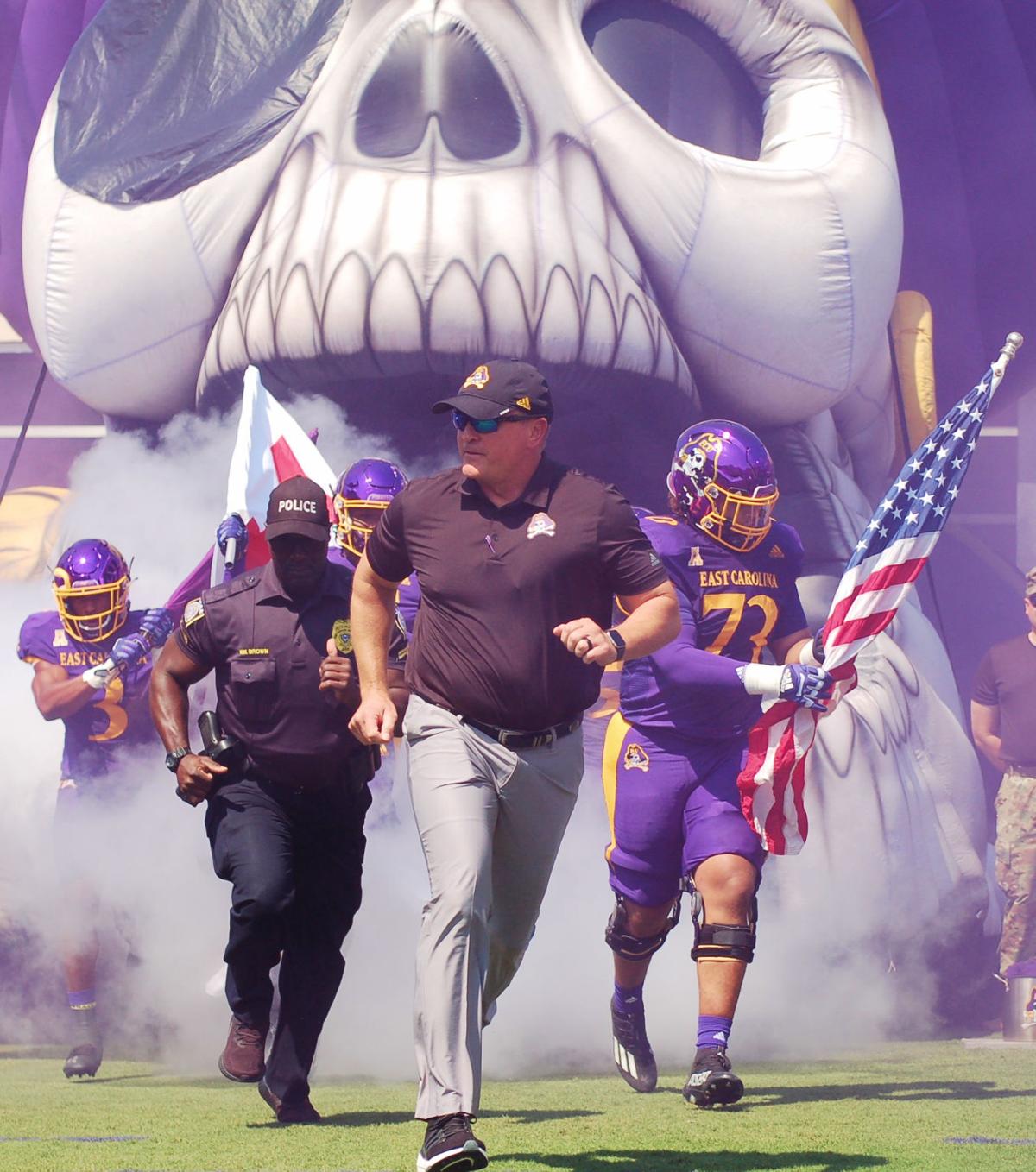 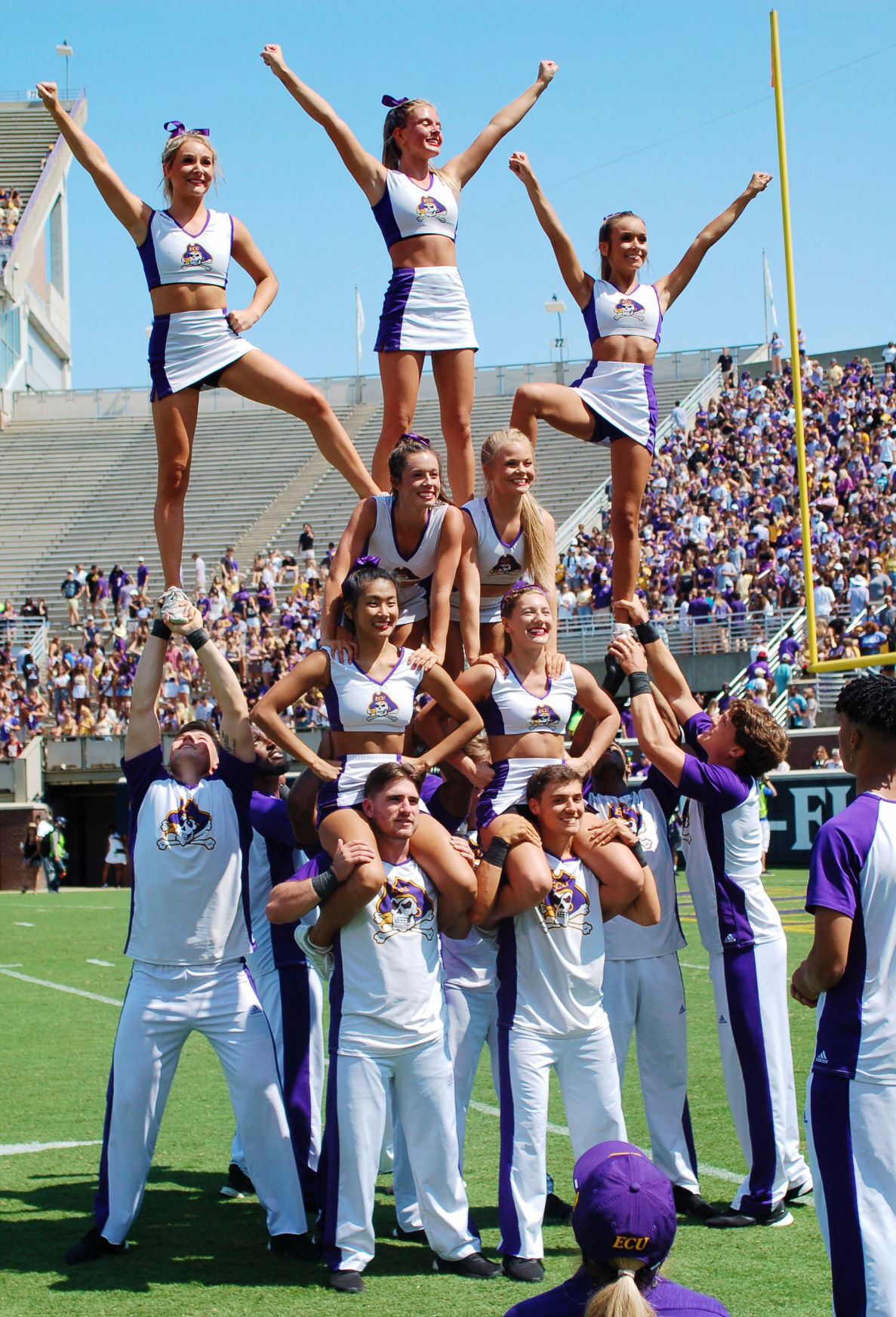 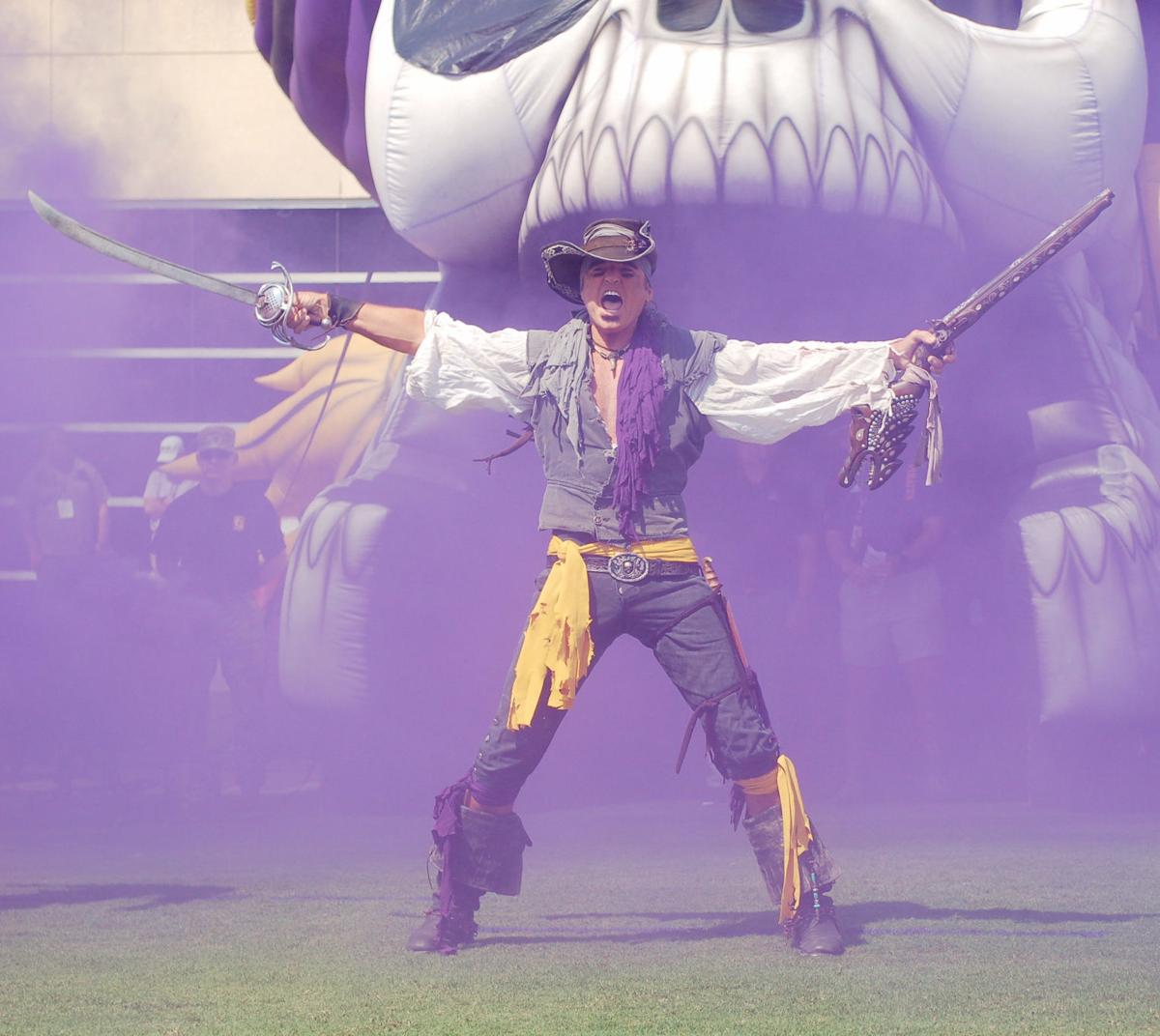 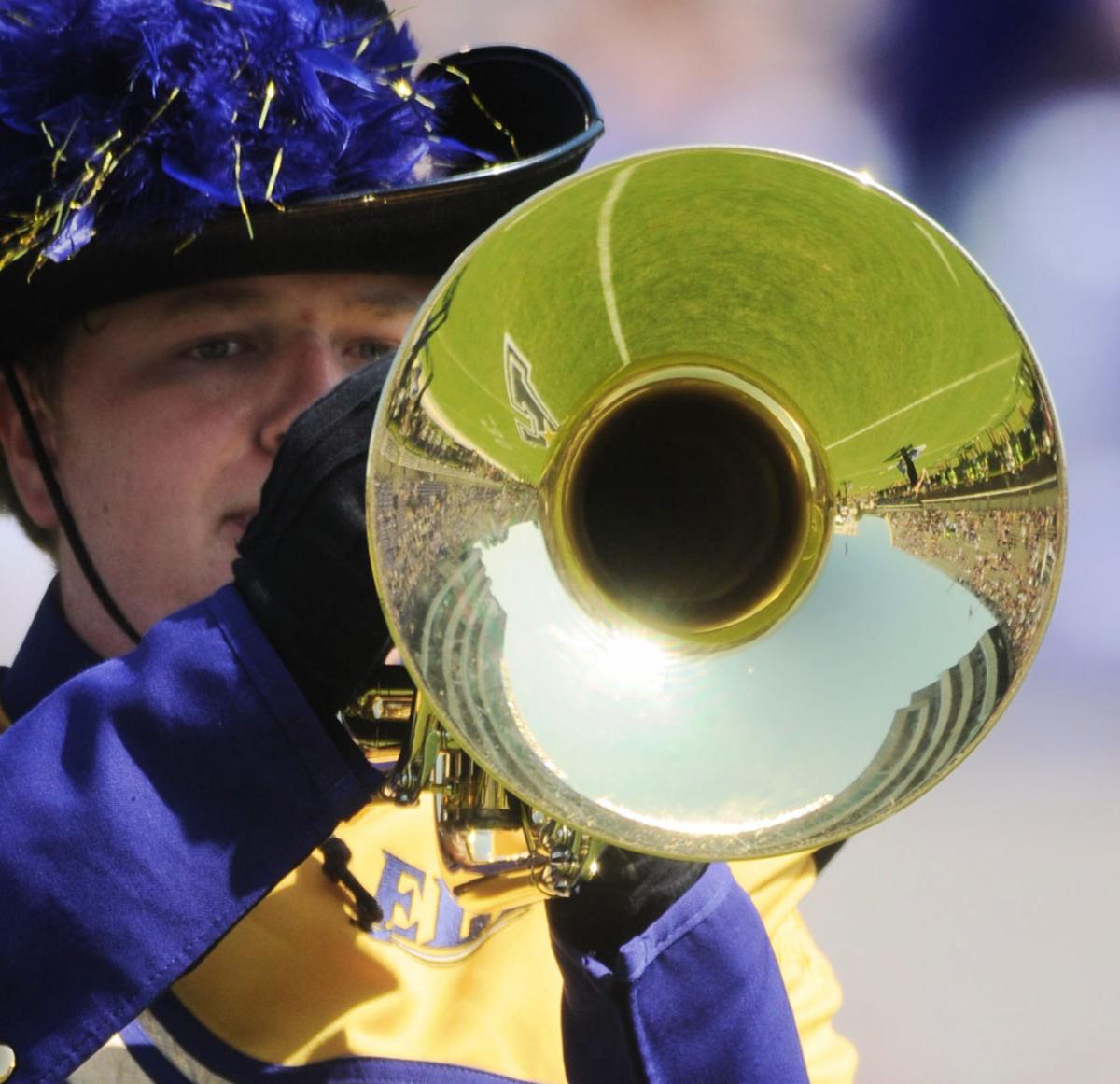 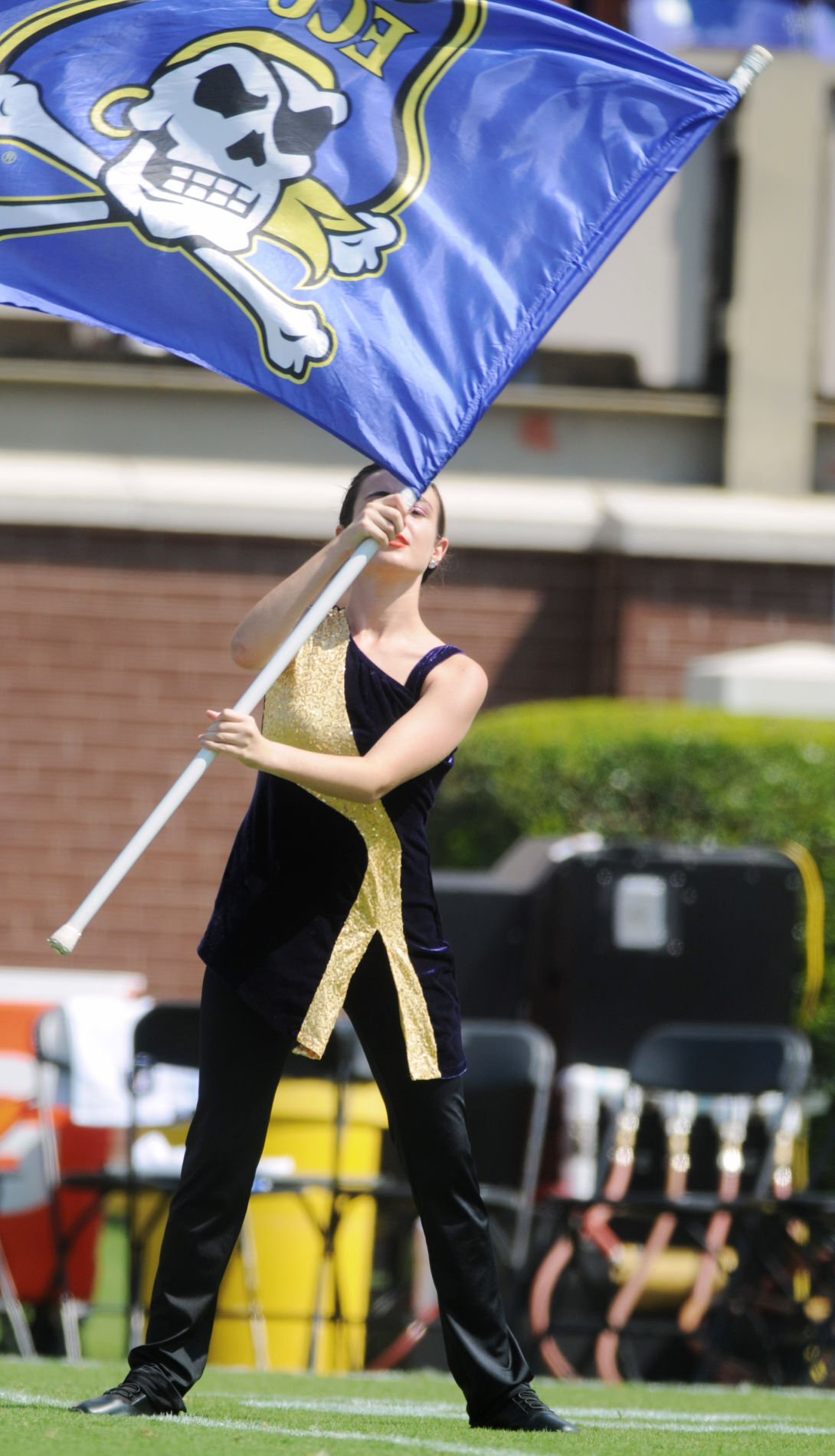 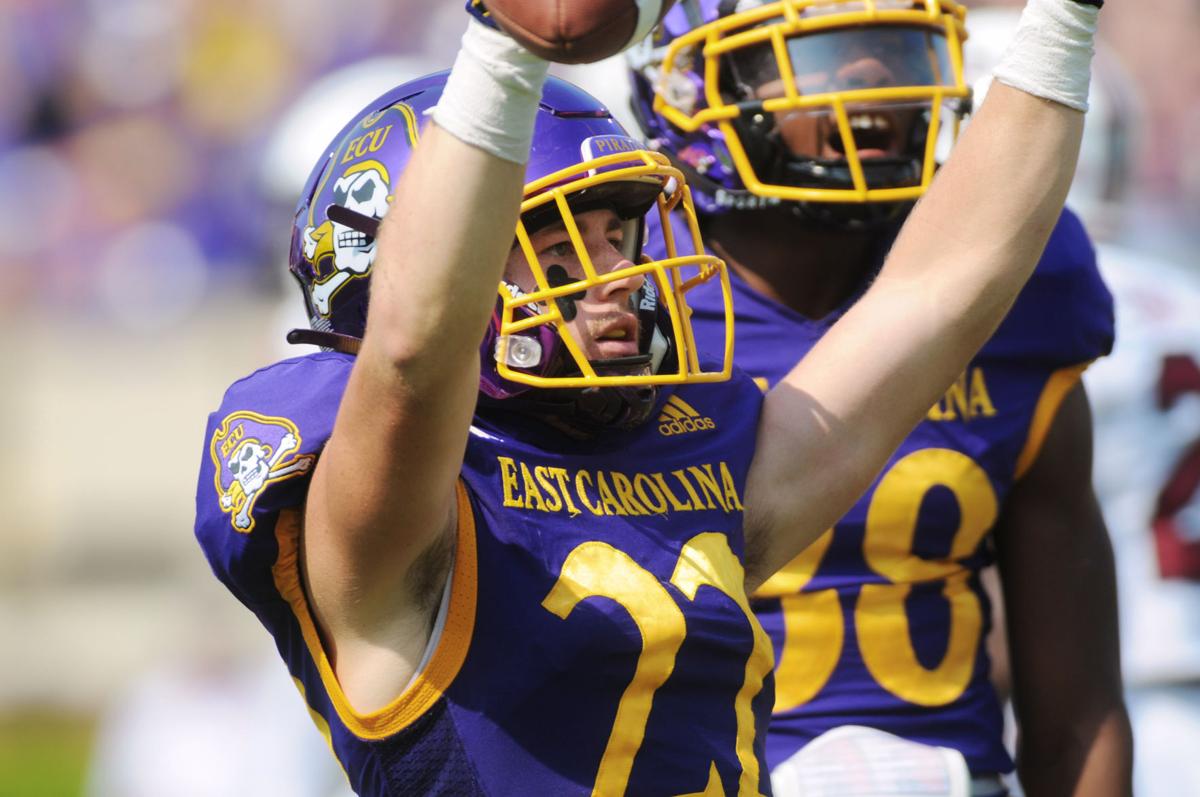 Tyler Snead celebrates a play for East Carolina on Saturday against South Carolina. 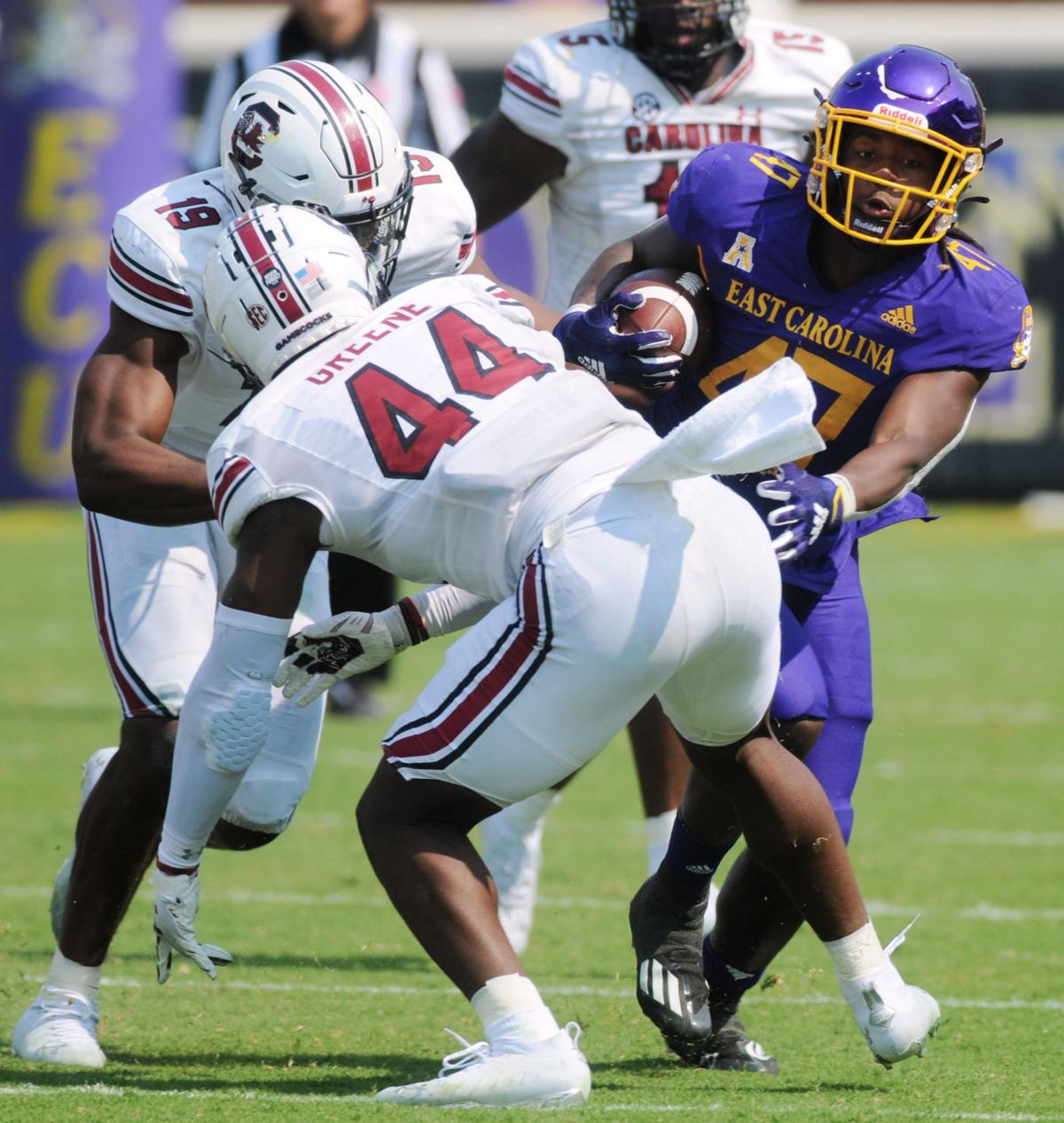 East Carolina running back Rahjai Harris (47) tries to get by South Carolina's Sherrod Greene on Saturday. 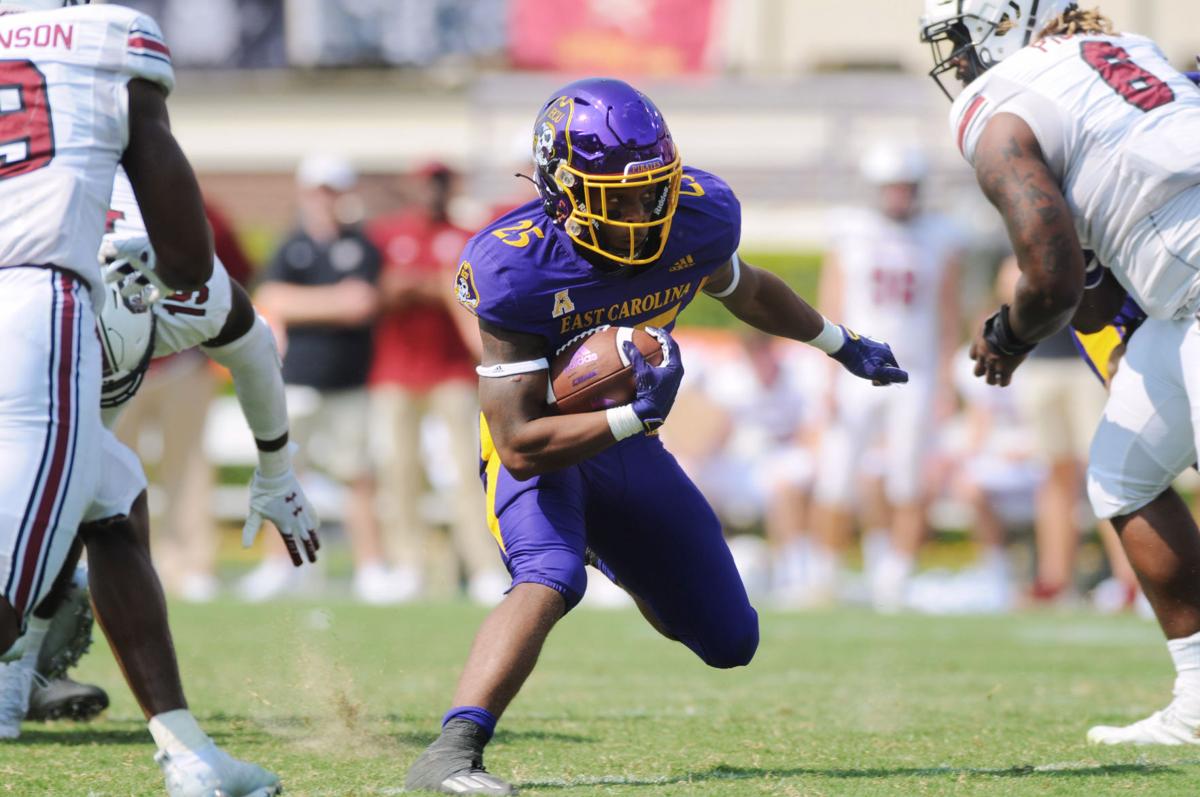 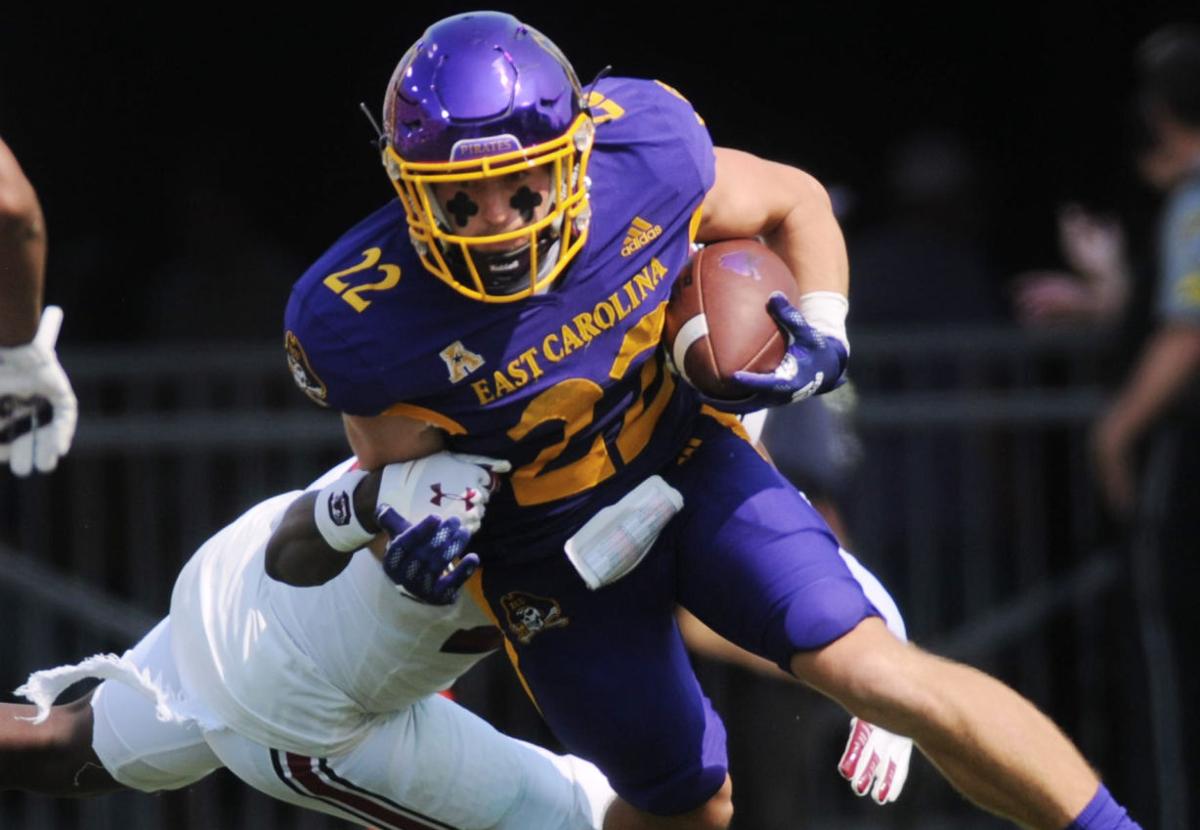 Tyler Snead celebrates a play for East Carolina on Saturday against South Carolina.

East Carolina running back Rahjai Harris (47) tries to get by South Carolina's Sherrod Greene on Saturday.

The excitement of a trick-play touchdown on the first play from the East Carolina football team eventually whittled to a hard-to-describe feeling for Pirate players later Saturday afternoon after a last-second, 20-17 defeat to South Carolina at re-energized Dowdy-Ficklen Stadium.

Parker White made the game-winning, 36-yard field goal for SC (2-0), creating that sinking feeling for the 0-2 Pirates in a game they never trailed until the final play. It was 14-0 Pirates early in the second quarter.

“Any loss is tough, but especially when we felt like we had the game the whole time,” ECU receiver Tyler Snead said. “The (locker room) is the mood like I am right now. I apologize, but we just came off a three-point loss in a game we felt like we should have won. Nobody is really happy in there right now.”

ECU’s first offensive play was a backfield hand-off to Snead, who suddenly stopped and launched a pass to Jsi Hatfield for a 75-yard score. But a grind-it-out pace and stalled possessions by both teams eventually created a 14-14 tie in the fourth quarter and then 17-17 with 6:46 left in the game.

There were 17 total punts. East Carolina’s offense, which got 77 passing yards by Holton Ahlers and 75 from Snead, was 2-for-16 on third downs.

ECU’s defense was steadfast almost the entire day, and SC’s defense got a boost before halftime on a screen pass from Ahlers to running back Rahjai Harris that bounced off Harris’ shoulder pad and ricocheted directly to linebacker Damani Staley, who rolled 63 yards to the end zone for a pick-six. It was 14-7 Pirates at the half without a Gamecock offensive TD.

“That was a big play, and you would give anything to have it back,” Pirate coach Mike Houston said. “They had a pressure called and we had a screen called. The screens sometimes are feast or famine. If you get it off, it’s going to be a big play for us. The kid made a great play. That’s probably the difference in the ball game.”

Here are answers to The Daily Reflector’s three pregame questions:

It was fitting that it was South Carolina freshman Juju McDowell, who finished with 71yards, one more than Harris. The game-winning drive by SC featured runs by McDowell that went 8, 15, 5, 16, 0 and 1, totaling 45 yards that were a major factor in the outcome.

“They gave us a chance to win in the fourth quarter, and I thought we had, but it just didn’t go our way,” Houston said. “We knew what was coming (on the last drive), our kids knew what was coming and we had the defense called, they just did a better job at the point of attack on those two (long) runs.”

The Gamecocks had 17 rushes for minus-18 yards in the first half, ending it with receiver Josh Vann as the team’s leading rusher thanks to one carry for 10 yards.

Kevin Harris, who has been banged up but was the Southeastern Conference’s leading rusher in 2020, finished the game with seven carries for 33 yards. Harris and Keaton Mitchell (42 yards) each received 14 carries for ECU.

“I appreciate Pirate Nation being back, and we wanted to give them a win,” Houston said. “For the kids, it matters to them. These fans matter to them. How they represent the university matters to them.”

Luke Doty did not play, giving Zeb Noland his second straight game leading the Gamecocks, and he flourished at times after halftime to finish 13-of-24 for 214 yards, a touchdown and one interception. Ahlers was 11-for-24 for 77 yards and two INTs.

Noland didn’t get much help from his receivers in the first quarter. One receiver didn’t turn around and locate the ball, resulting an interception by Warren Saba, and Josh Vann fumbled at the goal line while heading into the end zone. ECU’s Nolan Johnson and Juan Powell combined to hit Vann, forcing the ball loose for a touchback to keep the Pirates up 7-0.

Vann finished as the game’s top WR with five catches for 116 yards.

“We should have broken that one open if we convert those third downs,” Ahlers said. “It starts with the offense. I told the defense if they play like that, we should win every single time. It’s not on the defense at all. ... It’s on the offense and it starts with me because I’m the quarterback.”