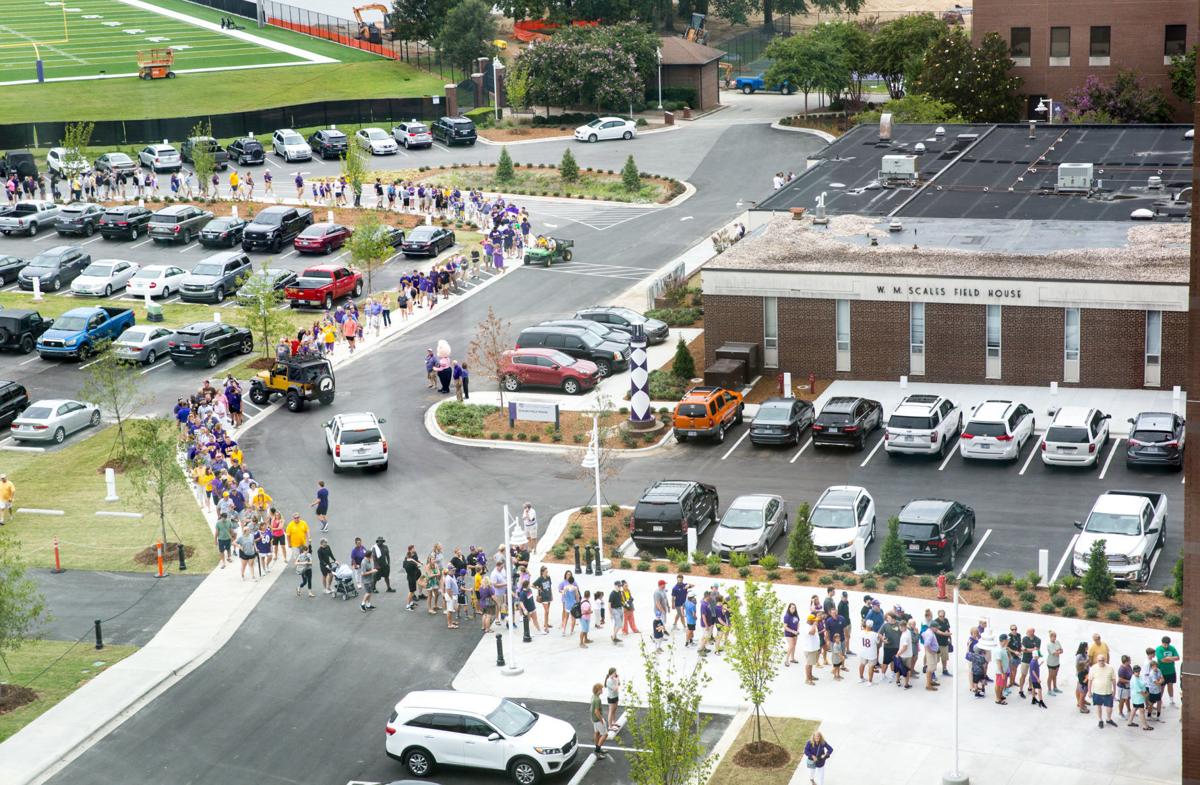 Fans line up outside of TowneBank Tower and Dowdy-Ficklen Stadium for Meet the Pirates on Aug. 17, 2019. 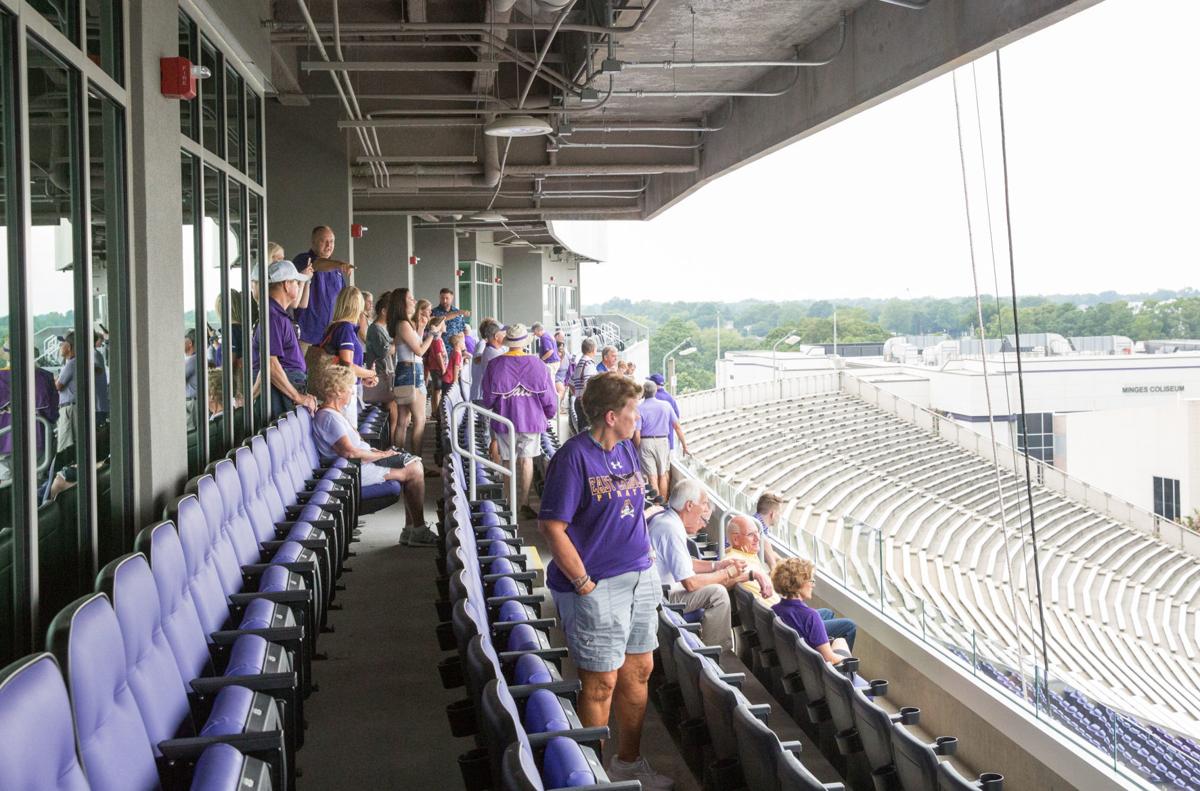 Fans check out premium seating at Dowdy-Ficklen Stadium during the Meet the Pirates event on Aug. 17, 2019.

Fans line up outside of TowneBank Tower and Dowdy-Ficklen Stadium for Meet the Pirates on Aug. 17, 2019.

Fans check out premium seating at Dowdy-Ficklen Stadium during the Meet the Pirates event on Aug. 17, 2019.

Potentially impactful decisions concerning East Carolina athletics could come as soon as today during a second special Board of Trustees meeting in a four-day span.

In the meantime, ECU administrators have tried to break down the balance of optimism toward having football games in the fall while maneuvering through the current reality of ongoing significant financial challenges.

The Pirates’ original goal of 16,000 football season tickets sold for this year, the second season under coach Mike Houston who has a history of winning teams at various schools, has been sidetracked by the COVID-19 pandemic. Sitting at about 4,600 season tickets to this point, ECU is eagerly waiting for specifics about what the potential fan experience will be like, including social distancing, and hoping for positive news in terms of playing a full football schedule and selling more tickets.

“Through this, we still have to generate revenue and we still have to sell tickets and be good at the individual sports that produce revenue,” second-year athletics director Jon Gilbert said. “We need to be mindful of that, while still having some operation deficiencies. ... We are anticipating playing in the fall and I think we will know legislatively through the NCAA and the football oversight committee, we’ll know sometime from mid to late June to early July what a start date could look like and what parameters are in place.

“Obviously, with our pre-COVID goal of 16,000 (season tickets), we’ll have to come off that number significantly and that will be factored into next year’s budget. Pirate Club donations and other savings and other revenue that comes in between now and the end of the fiscal year (June 30) would reduce our $10 million deficit (projection).”

Gilbert said Monday he was not surprised by the numbers regarding TowneBank Tower in the ECU athletics fiscal sustainability working group report, and that he was aware of the details about the impending substantial renovation and upgrade to Dowdy-Ficklen Stadium when he left Southern Miss for ECU in December of 2018. The report showed a shift from an April 2018 model projecting the tower’s revenue at $42.7 million over 30 years to a December 2019 projection of a loss of nearly $6 million over 30 years.

The recommendations portion of the report included this statement: “At the time of this report, there is no clear plan to improve the revised pro forma. The working group recommends a review of the tower operations, pricing structure for the premium seating and opportunities to generate revenue from meetings and events. Such a review should result in a set of recommendations to close the anticipated operating shortfall.”

When the COVID-19 pandemic became a harsh reality and college sports were stopped in mid-March, it didn’t take long for Gilbert to meet with Pirate coaches about scheduling.

“We talked to our coaches about a regional scheduling philosophy in the nonconference,” he said. “When we looked at every sport that we have, I think we were able to eliminate flights in nonconference travel other than maybe two events that we were contractually obligated to do. ... Our nonconference schedule for next year for all sports, other than the aforementioned plane trips, we should do all of those by bus. I am anticipating next year and in the subsequent years, we stick with a very regional format.”

One innate scheduling factor in the American Athletic Conference is its spread-out geography. Among the full-time league members, there are two in Texas and two in Florida. The closest three schools to ECU’s athletics campus are Temple (400 miles), Cincinnati (600) and Central Florida (645).

Tulsa, Houston, SMU and Wichita State are all at least 1,200 miles away from ECU.

“I think everything is on the table, as it relates to scheduling in the future, and I can’t emphasize enough how it really is going to depend on what the fall looks like as it relates to football,” Gilbert said. “There are scheduling alliances between some Division I conferences being discussed in detail. The American has not had what I would consider significant discussions on regional scheduling, other than to say there might be some interest from a nonconference standpoint.”

The agenda for this morning’s special ECU Board of Trustees meeting does not reveal many specific details.

Listed is the regular call to order, roll call and then conflict of interest statement, which is followed by closed session, return to open session and adjournment. Speculation this week has centered around if the Pirates’ cost-cutting measures will include discontinuing any sports to reduce their current number of 20 sponsored varsity teams.

Sponsoring 16 teams is the minimum requirement to be a Division I-A football playing member.