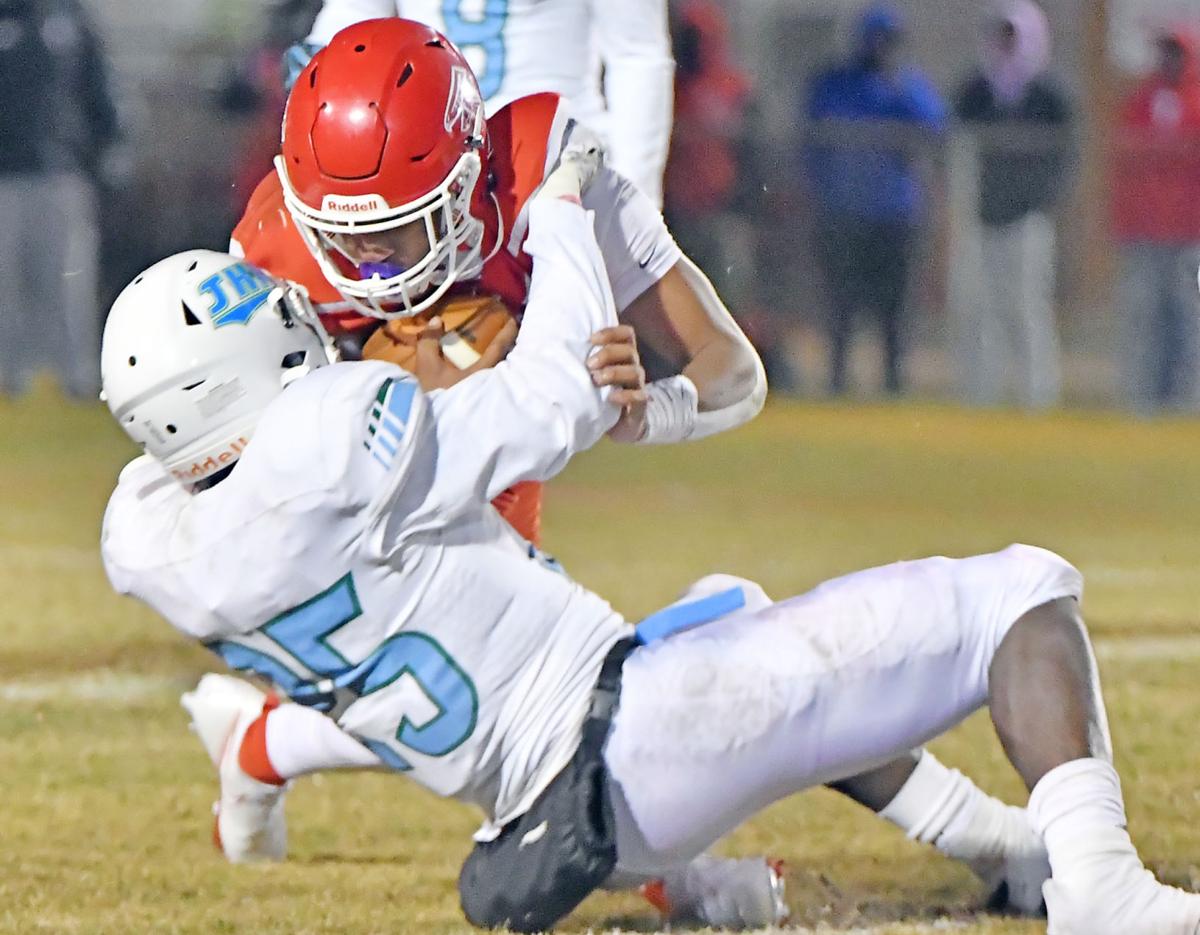 J.H. Rose defensive end Juantrea Bradley Jr. brings down Seventy-First running back Anthony Quinn Jr. during the Rampants' 20-14 win last week in the third round of the Class 3A state playoffs. 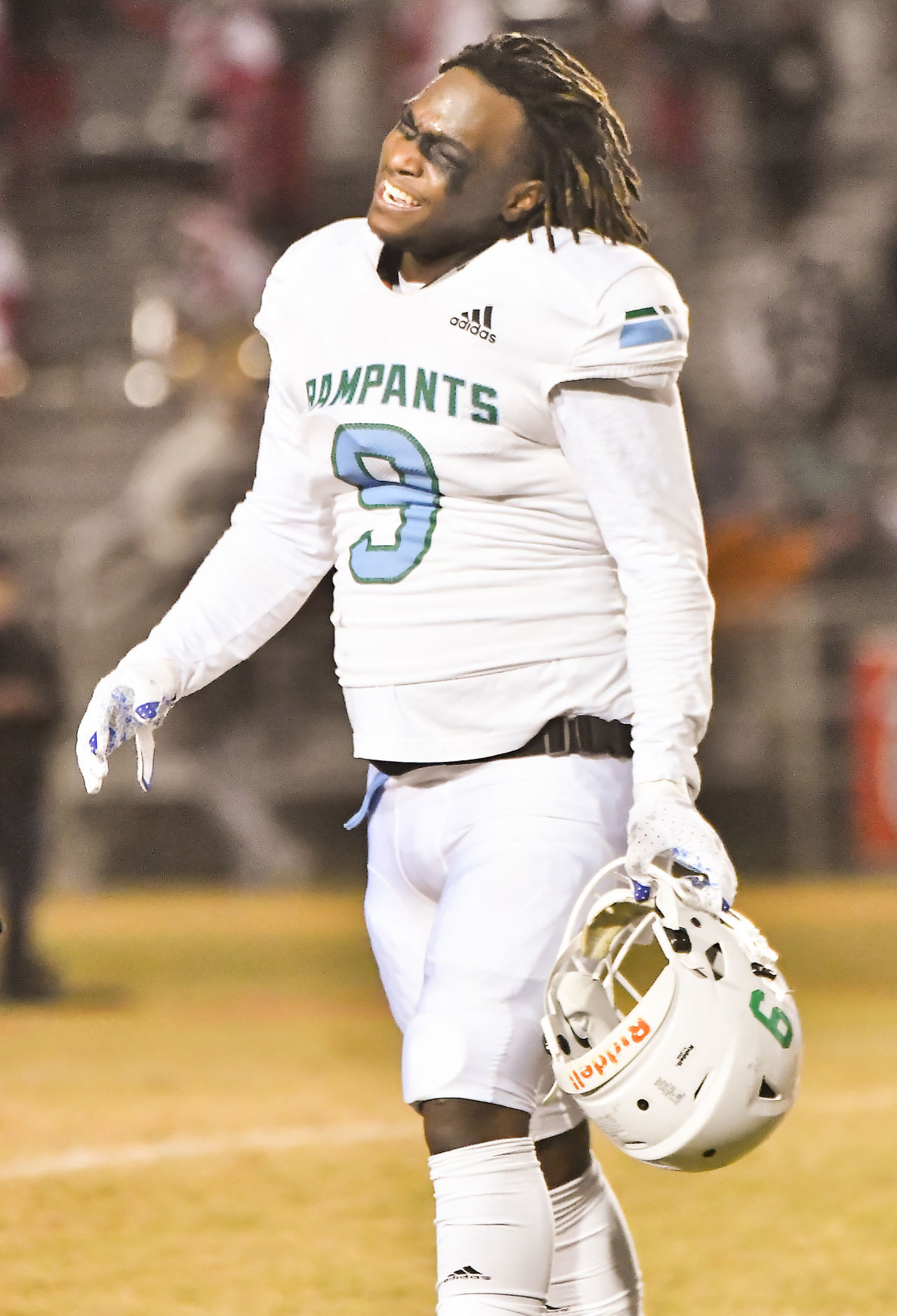 J.H. Rose’s Jamarie Loftin smiles after the defense forces a Seventy-First turnover in the third-round win last week. The No. 6 seed Rampants return home to face No. 23 seed Scotland at 7:30 p.m. Friday night.

J.H. Rose defensive end Juantrea Bradley Jr. brings down Seventy-First running back Anthony Quinn Jr. during the Rampants' 20-14 win last week in the third round of the Class 3A state playoffs.

J.H. Rose’s Jamarie Loftin smiles after the defense forces a Seventy-First turnover in the third-round win last week. The No. 6 seed Rampants return home to face No. 23 seed Scotland at 7:30 p.m. Friday night.

The uneasiness of an 0-3 start seems like a long time ago for the J.H. Rose football team.

The Rampants opened the 2021 season with three straight losses against good competition (Wilson Hunt, Cleveland and Northeastern), and players were wondering if they could right the ship and finish high enough in the Big Carolina 3A/4A Conference to earn a return trip to the state playoffs.

Not only has Rose seemingly corrected most of its early-season mistakes, it is on a roll – the No. 6 seed Rampants (9-4 overall) finished second in the league and have won nine of their last 10 games, including pulling an upset (20-14) last week over previously-unbeaten Fayetteville Seventy-First, the No. 3 seed, on the road in the third round.

“Everyone knows who Scotland is and the successful history it has with their football program,” Rose head coach Will Bland said. “This is not going to be an easy game. They are really not a 23 seed – they’ve gone on the road, played well and beat three higher-seeded teams.”

The Scots are similar to the Rampants in that they, too, experienced a three-game losing streak; however, theirs happened at the end of the season with conference defeats to Pinecrest, Lee County and Richmond County.

Scotland overcame that skid and rebounded to win their first three playoff games, all on the road – Southern Durham 35-13, West Carteret 41-21 and Northern Nash.

“They are a pretty good team but are young this year,” Bland said. “They are still going to try and run the ball down our throats, so we have to be able to stop the run and don’t give up big plays like we’ve been doing the past couple of weeks.”

Rose’s defense was much maligned early in the season, but the bend-but-don’t-break philosophy has worked well in recent weeks. Last week against Seventy-First, the Rampants forced five fumbles (recovered four) and sealed the win with an interception from Jaceire Daniels-Waller with nine seconds left.

“Seventy-First was really, really good,” Bland said. “The ball bounced our way. They did run for 250 yards on us, but at key moments in the game, we forced a turnover or got the ball back on downs. Overall, I thought our defense did a great job. Our coaching staff was able to adjust to what was going on and get us in situations where we were able to win the game at the end.”

A good example of adjusting was at the start of the second half. Rose took possession and scored, but then Seventy-First came right back with a score of its own.

“We told them to just keep fighting, and later on when the defense got back out there in the fourth quarter, there was no bickering or fighting,” Bland said. “They have really grown together and believe in each other, and that’s been a big reason they’ve been able to get the job done for us.”