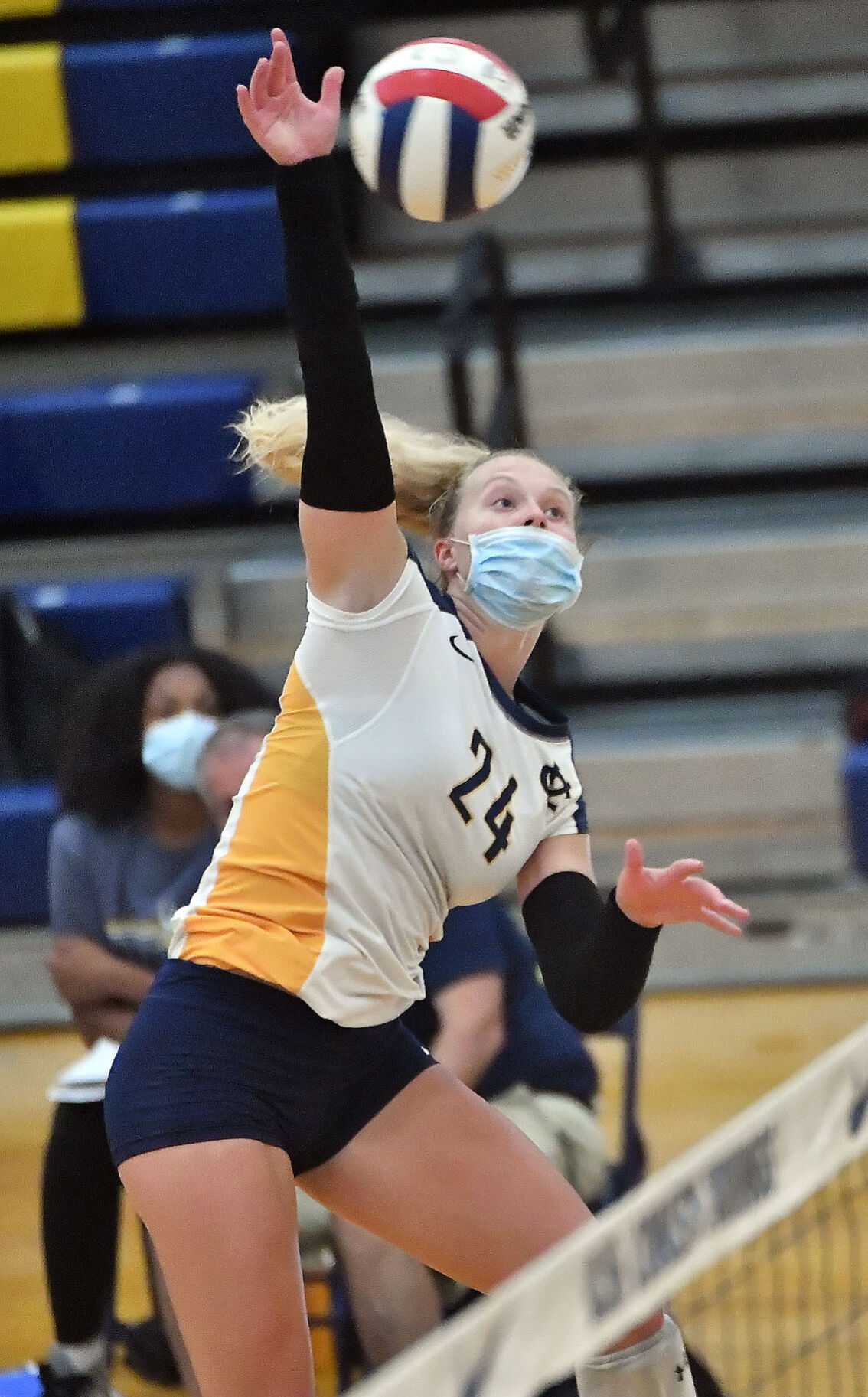 D.H. Conley’s Maddy May goes up for a kill in Tuesday’s win, the 500th in the career of coach Jennifer Gillikin. 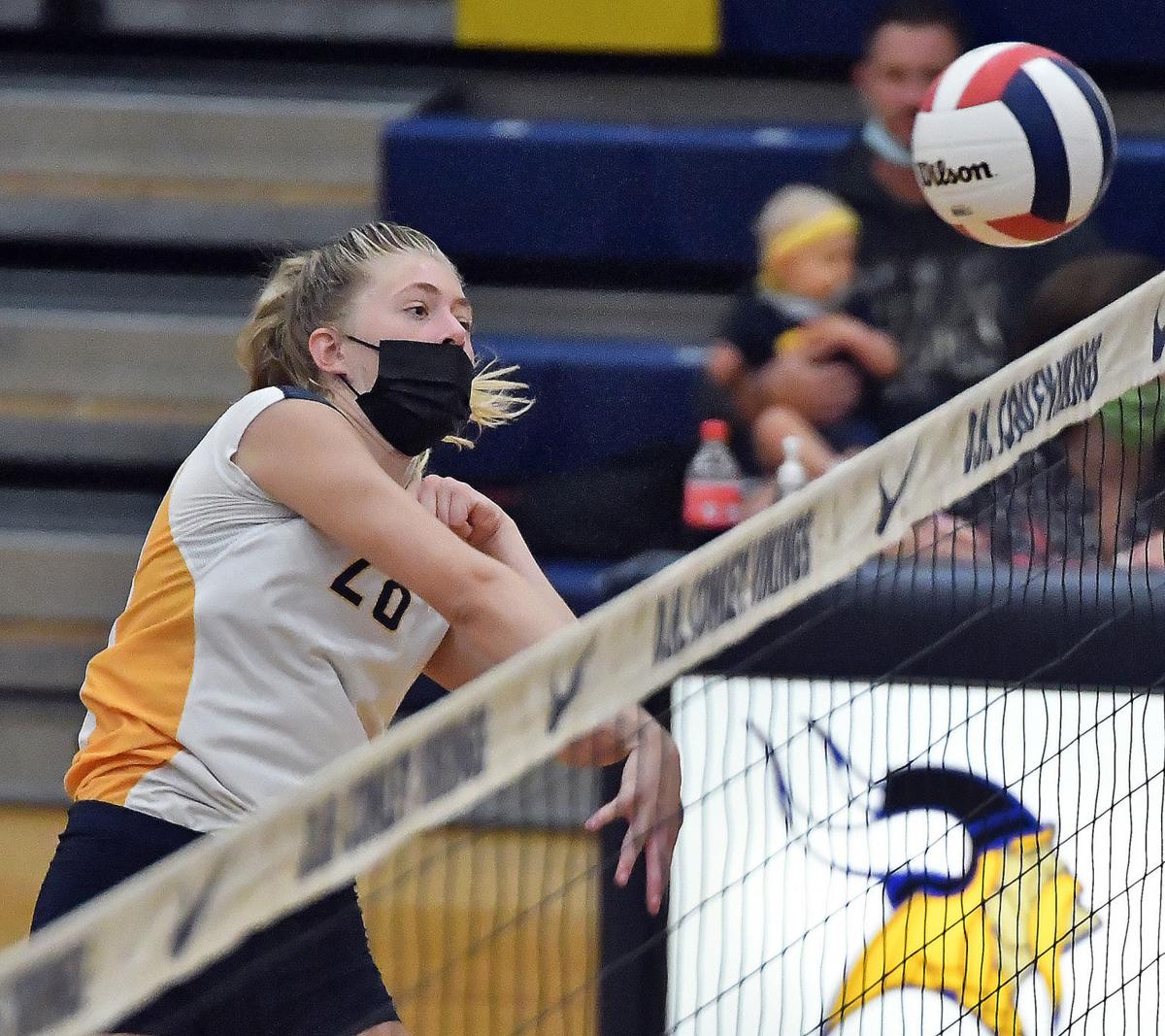 D.H. Conley’s Maddy May goes up for a kill in Tuesday’s win, the 500th in the career of coach Jennifer Gillikin.

They did so quietly and without any fanfare, but the D.H. Conley volleyball team gave its head coach her 500th career victory Tuesday night.

It was also the 500th win for Jennifer Gillikin, who started at DHC 23 years ago after a stint as the junior varsity coach.

“Those 500 wins are not about me, they are about all of my players,” she said. “I have been blessed to have coached some fantastic young ladies and we have certainly enjoyed quite a few wins.

“The program kind of fell into my lap back then,” she added, laughing. “I was 23 years old and really didn’t have a clue what I was doing as a head coach. I played high school volleyball (at Pamlico County) and knew the sport, but there is a lot more to it than just knowing the sport. Knowing how to coach high school girls takes a lot of years to figure out, but I’ve been incredibly blessed to have amazing assistant coaches that have supported me and gone with me through all of my goals and I am pretty proud of this program.”

Conley, coming off a three-set sweep on the road Monday at Cedar Ridge – the only team to beat the Vikings to date this season – didn’t suffer a letdown against the Falcons.

Mallie Blizzard served three points before a kill by Kaci Turnage ended the run in the first set.

With Maddy May and Ashlyn Philpot providing numerous kills, the Vikings extended their lead to 12-3 following four points from Carson Corey and one from Ella Philpot. Three points each from Caroline Dobson and Caeleigh Cole added to their advantage, and the home team went on to win the first set handily.

South Central improved its block defense (Kaci Johnson and Miriam Hardy) and were able to establish a lead through the first five service rotations of the second set.

Conley clawed back, eventually taking the lead before a kill by SC’s Kaci Johnson tied it at 9-all.

Three points from May (punctuated by an Ella Philpot kill), combined with four straight from Philpot (Ashlyn Philpot had two kills) helped the Vikings expand their advantage to 21-12. A kill by May on Cassie Dail’s serve put the home team ahead two sets to none.

Turnage served three straight points early in the third set (Johnson provided a kill) to give South Central a 4-2 lead. But a kill by Ella Philpot started a run of eight straight points, and she reeled off seven points at the line to give Conley control, 11-3.

The Vikings’ lead grew on a kill and tap by May off Carson Corey’s serve to make it 16-7 before a kill by Sarah Ebeling ended the flurry.

After neither team could score on its next two service chances, Ashlyn Philpot had two kills and Blizzard added one of her own off Ella Philpot’s serve to increase the lead to 22-12.

Johnson briefly staved off match point with a kill, but the Falcons were not able to score on their own serve and Conley finished with the sweep.

Gillikin said she addresses her team’s long-term success prior to matches.

“We always talk about every team that plays us wants to beat us, and it seems like teams elevate their game against us, which is a great thing,” she said. “I want teams to play their hardest when they play us – that’s how we get better. We knew this would be a strong week of volleyball, and South Central came in and played well. But I don’t want it to ever be about me; I want my kids to be celebrated – they do the hard work, and it’s about them.”

Conley broke a 1-1 impasse in the second half and held on for the win on Tuesday night in conference action.

JP2’s defense shut down a Pungo Christian club that had been averaging better than seven goals a game entering the game.

The Saints gave up a mere four shots for the game, led by the back four of Zaiere Evens, Bryan Arriaga-Arvizu, Phoenix Balot and Arron Gregory.

At the other end JP2 got goals from Ryan Smith (assist by Noah Bullock), Caleb Jones (Smith) and Luke Hill (Esteban Escobar).

Conley is at Hoggard on Friday.