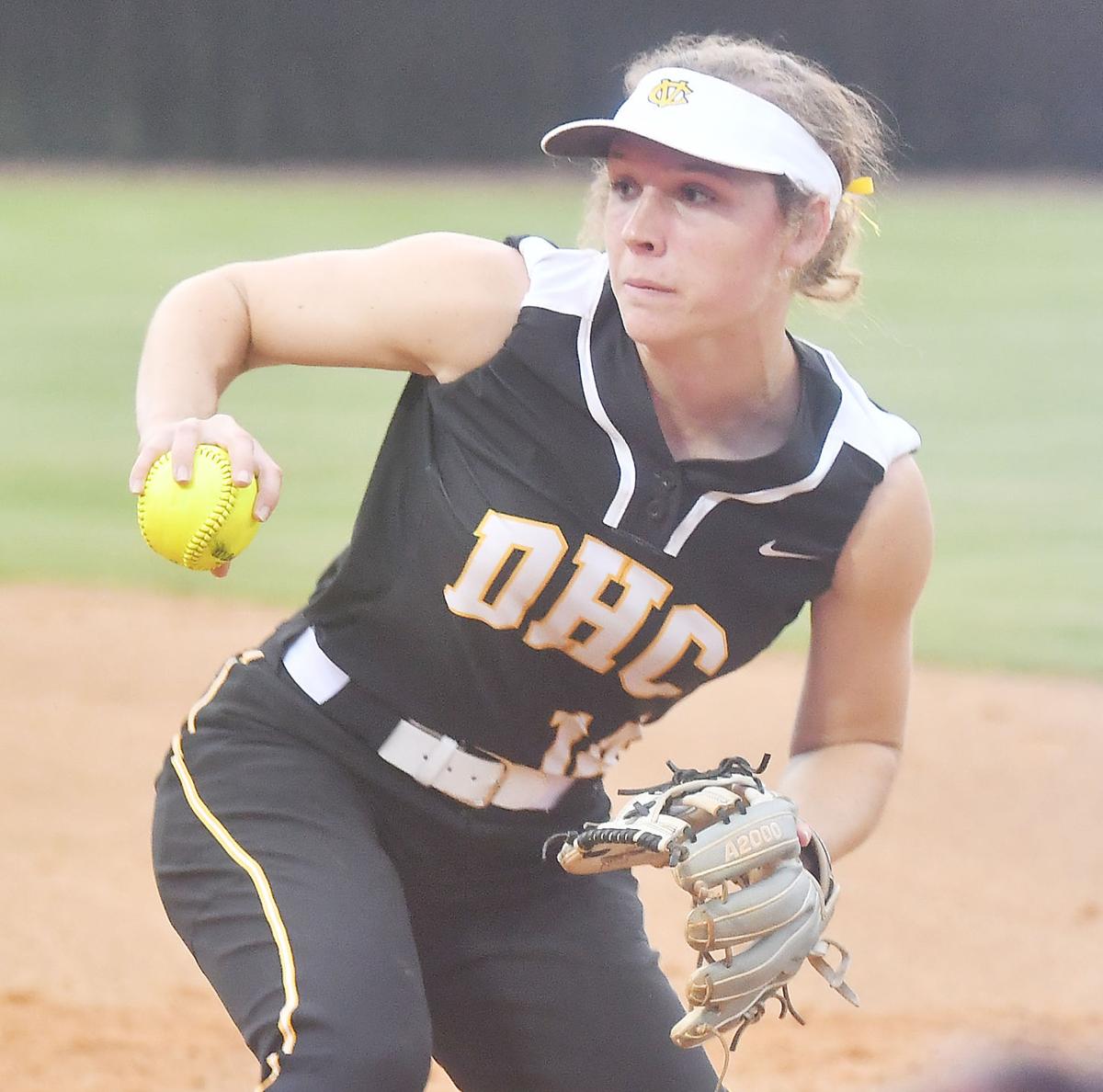 D.H. Conley’s Carson Fleming flips the ball to first base during the Vikings’ win over Triton Tuesday night. 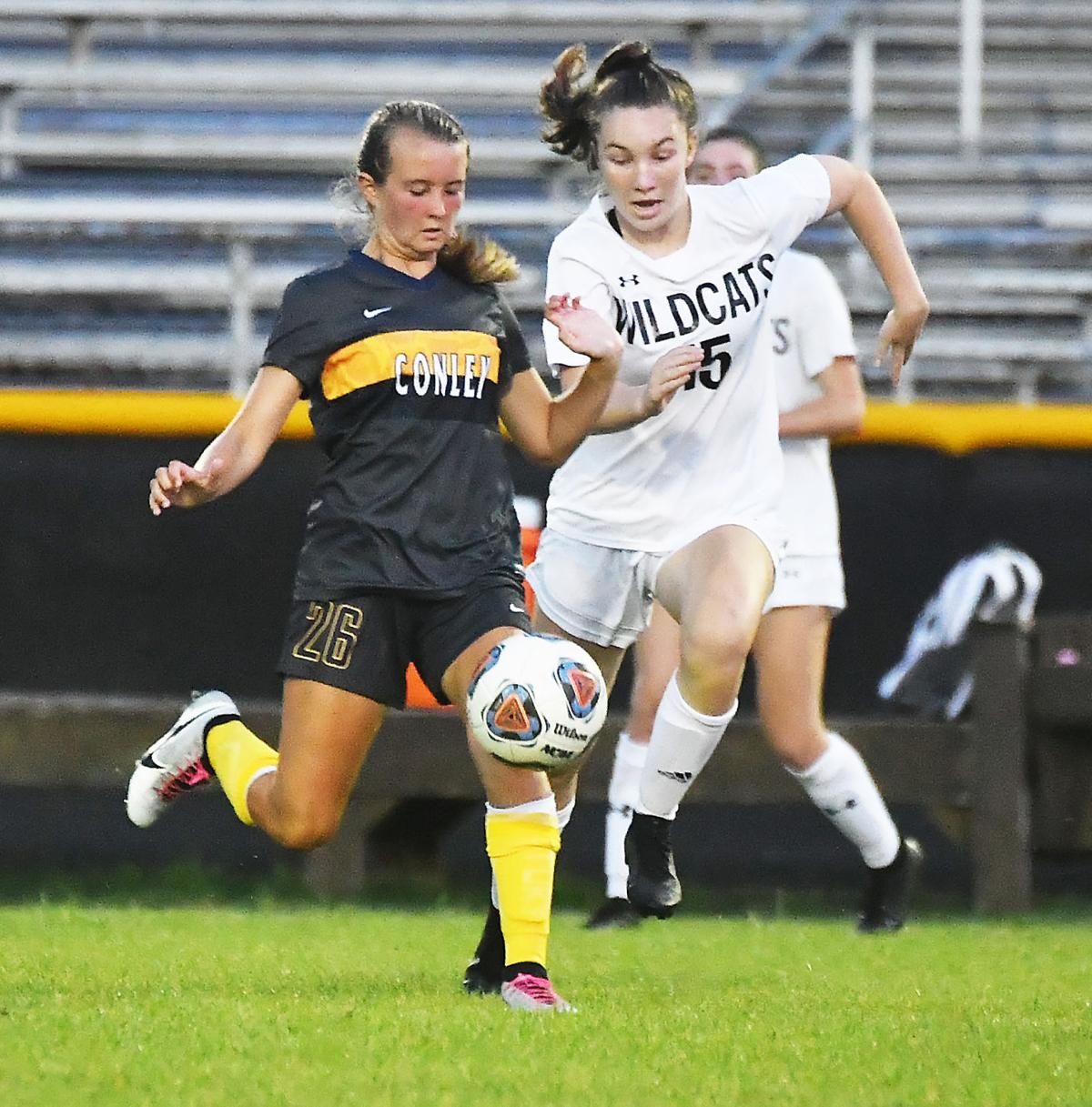 D.H. Conley’s Carson Fleming flips the ball to first base during the Vikings’ win over Triton Tuesday night.

One team is moving on, and the other had its season end.

D.H. Conley’s softball team defeated Triton 8-0 in the first round of the Class 3A state playoffs at home Tuesday night, while the Vikings girls soccer team suffered a season-ending 2-0 loss to East Chapel Hill in their first round state playoff match on their home pitch.

Lauren Wiles and Emma Adams proved solid on the mound for Conley in the softball game. Wiles retired the first nine batters she faced – seven via strikeout, including all three in the top of the third inning. She finished with 10 strikeouts and no walks through five innings.

Adams worked the last two innings and gave up one hit, struck out three and walked one.

The Vikings stranded Adams (double) in the bottom of the second, but didn’t waste their opportunity in the third.

The Vikings added two more runs in the fourth inning and three in the fifth.

Sawyer finished 2-for-4 with a triple and homer for Conley. Carson Fleming added a solo home run while Bri Bowers doubled. Conley was able to take advantage of seven errors by Triton pitchers with some alert baserunning.

The Vikings’ season came to an end against perennial power East Chapel Hill.

A couple of defensive lapses were both pounced on for goals by ECH, one in the first half and one in the second, and the Vikings (14-1) were downed for the first time.

The game was delayed by storms, limiting warmups, and Conley coach Marlee Carbajal said her team played hard but could not overcome its few miscues.

Conley enjoyed a dominant ride to the playoffs, outscoring opponents 67-6 in the regular season and logging nine shutouts along the way. Until Tuesday, the Vikings’ only close calls were a 2-1 win over C.B. Aycock and pair of one-goal thrillers against South Central.

Rose suffered its first setback of the season on Tuesday night after West Johnson hammered home five runs in the second inning and three more in the fourth to lead 8-1 after four.

The visitors tacked on an insurance run in the seventh.

The Panthers (2-0) broke a 1-1 deadlock with seven unanswered runs over the sixth and seventh innings to take down local rival A-G over the weekend.

Elijah Bonner ripped and RBI triple for his lone hit, Brandon Warren doubled and drove in a pair as part of his 2-for-4 game and Dawson Ables and Nicholson each added two hits and scored two runs to lead North Pitt.

Warren dazzled on the mound in a complete-game effort, striking out 12 Chargers and walking none while yielding three hits.

For Ayden-Grifton (0-2), Tanner Cannon boomed a solo home run and finished 2-for-3.

The Panthers scored nine times in the bottom of the third and five more times in the fourth to end things early against Havelock.

Forrest got the pitching win, striking out six.

The Rampants got a familiar result on Saturday, capping an undefeated regular season with another convincing win.

Leading the way with wins in the singles round for Rose were Stockton Rouse, Chad Styron, Landon Brown, Bryson Wall and Wesley Keen. The tandems of Owen Osborne/Styron, Brown/Rouse and Wall/Keen made a doubles sweep for the Rampants.

Next up for Rose is the regional round of the playoffs.

Handling the singles sweep with wins were Osborne, Rouse, Styron, Brown, Wall and Jordan Taylor. The teams of Brown/Rouse, Keen/Evans and Hall/ Rappleyea wrapped up the doubles round.

Rose opened its girls’ season with a clean sweep of New Bern in singles and doubles.

The effort was led by singles wins from Ginger Evans, Edie Yount, Kelli Melvin, Murphy Fisher, Dabney Osborne and Emily Mitchum. That was backed by three straight wins in the doubles round by Evans/Melvin, Yount/Fisher and Osborne/Mitchum.

Unbeaten Hope ran roughshod over Cox on Tuesday, getting two goals apiece from Owen Conway and Marissa Sutton to account for half of their team’s tallies.

The others came from Isaac Congleton, Noah Futrell, Lucy Lefever and Rebekah Ochoa.

Hope (8-0) plays on Thursday at Wellcome.