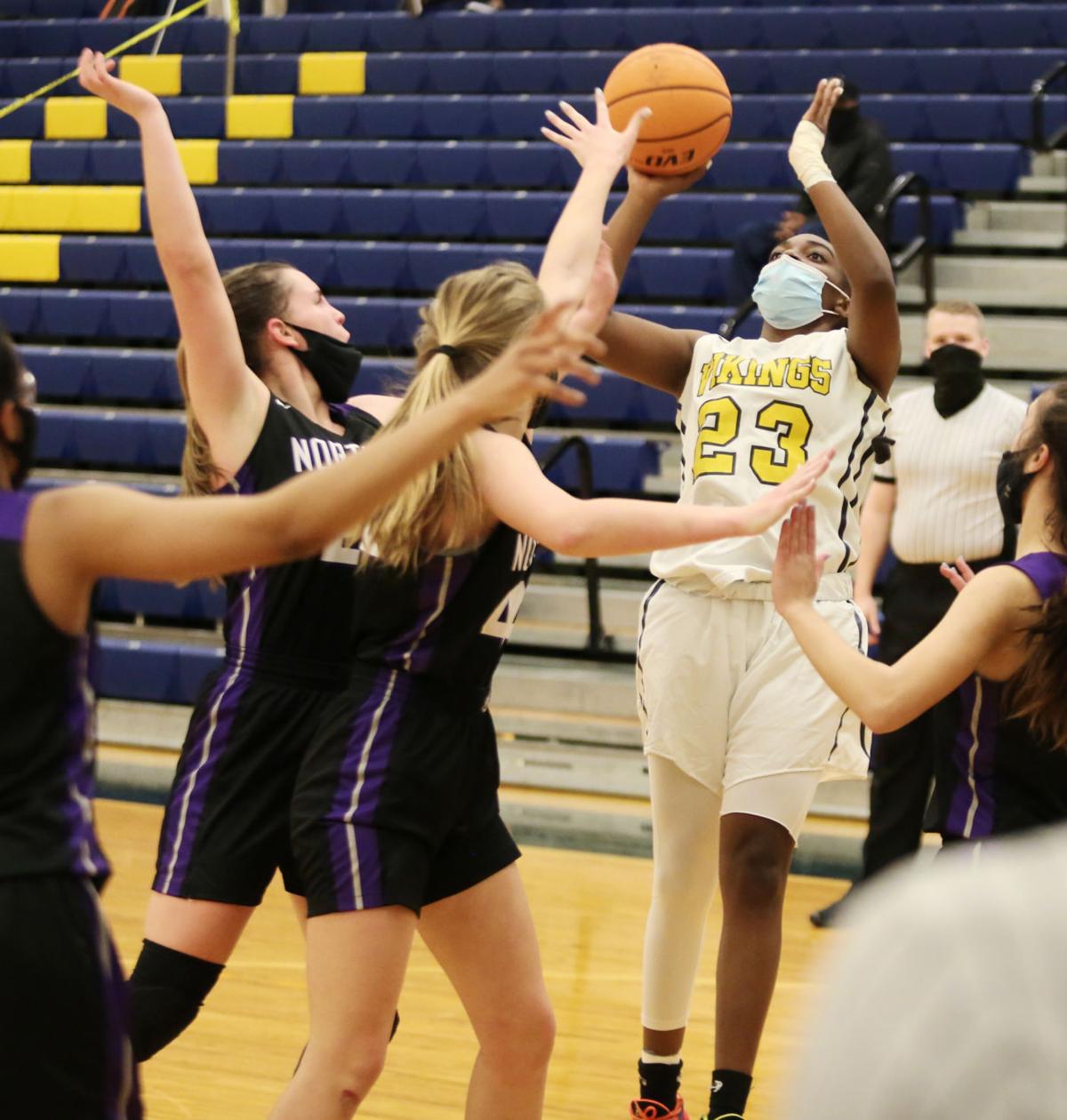 D.H.Conley's Krystal Haddock takes a shot in heavy traffic against Northern Guilford on Tuesday night in the opening round of the 3A state playoffs. Conley won in overtime. 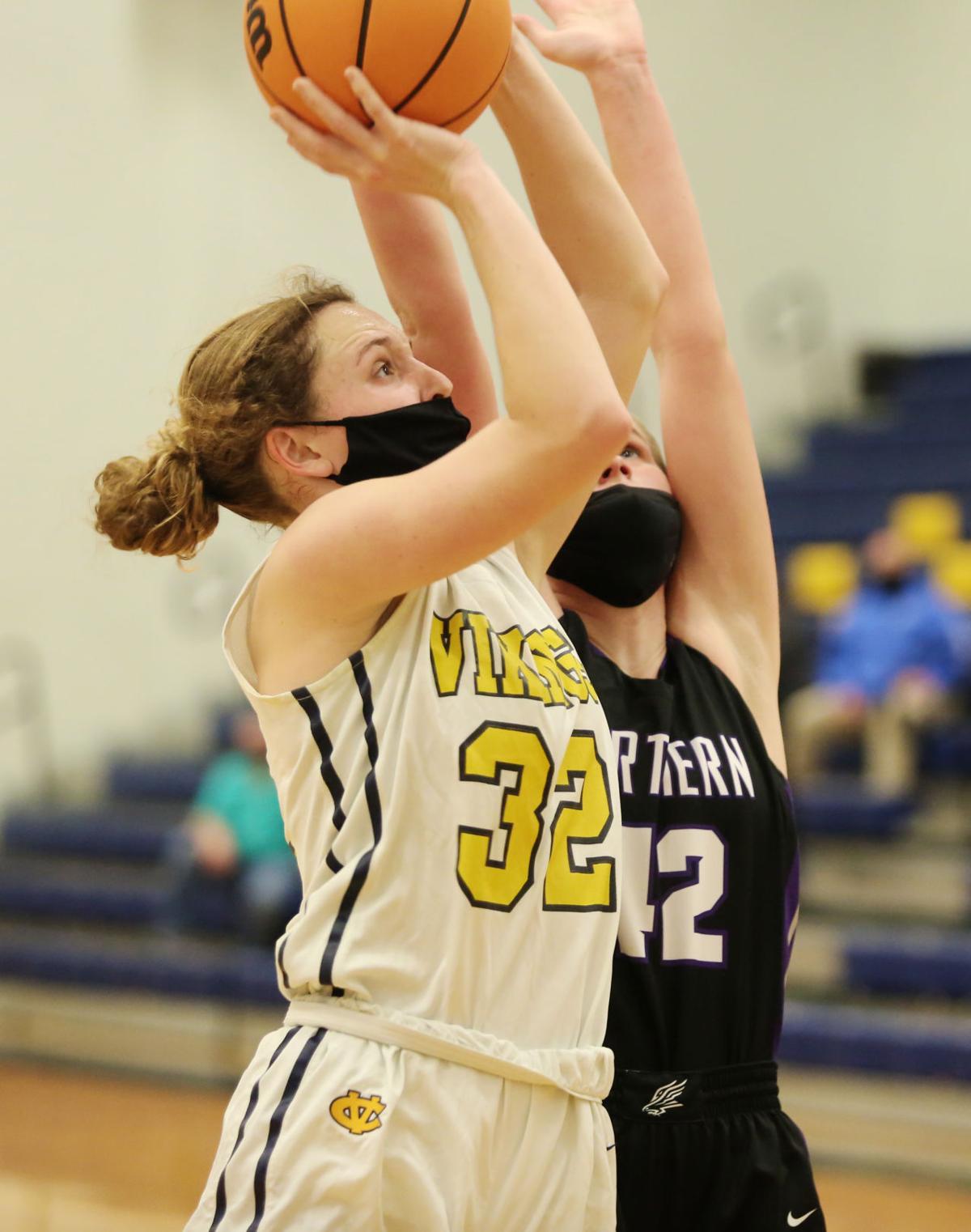 D.H.Conley's Carson Fleming takes a shot over Northern Guilford's Jadyn Newsome Tuesday night in the opening round of the 3A state playoffs. Conley won in overtime. 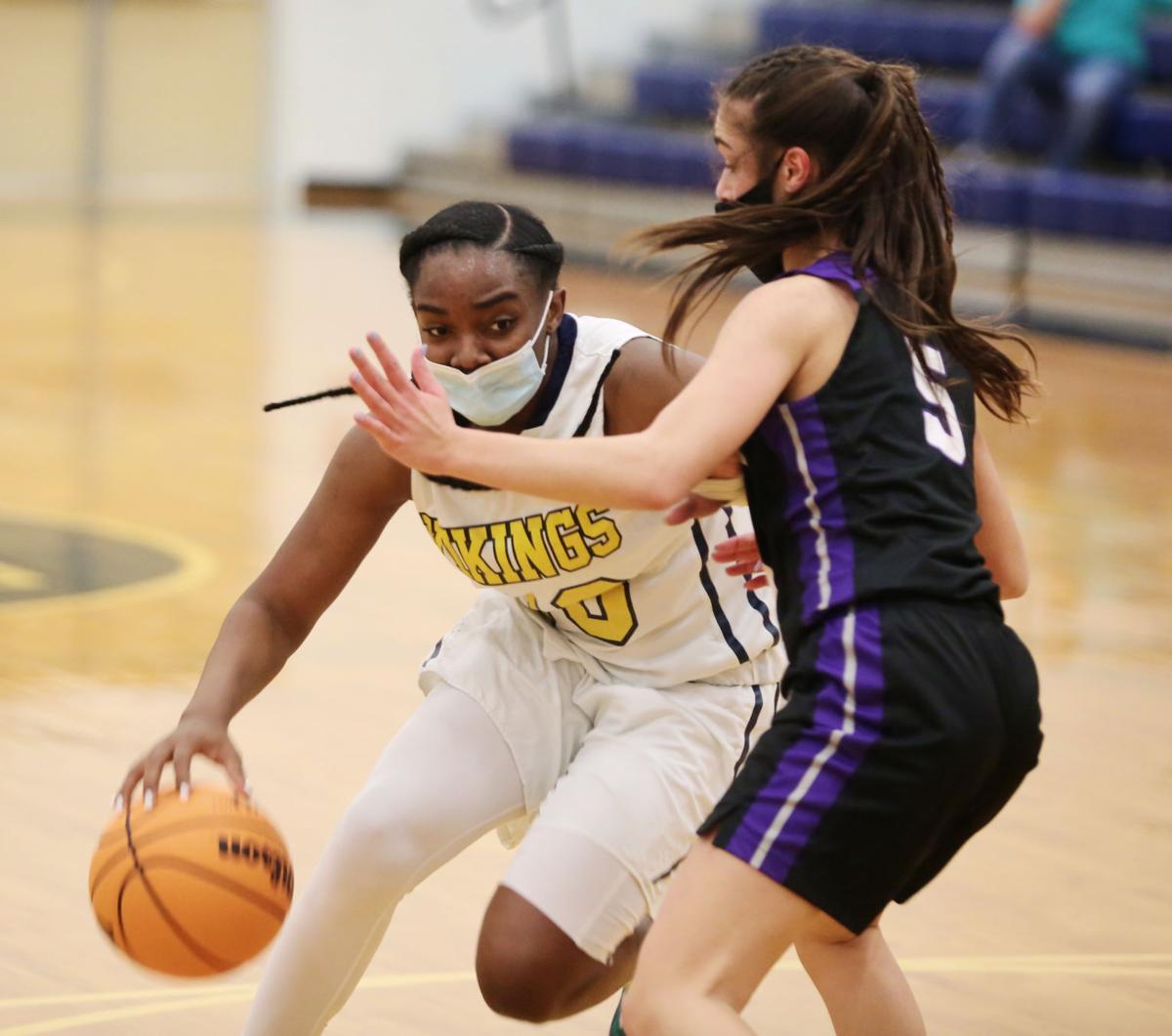 D.H. Conley’s Krystal Haddock drives the lane against Northern Guilford’s Christina DeLisa Tuesday night in the opening round of the 3A state playoffs.

D.H.Conley's Krystal Haddock takes a shot in heavy traffic against Northern Guilford on Tuesday night in the opening round of the 3A state playoffs. Conley won in overtime.

D.H.Conley's Carson Fleming takes a shot over Northern Guilford's Jadyn Newsome Tuesday night in the opening round of the 3A state playoffs. Conley won in overtime.

D.H. Conley’s Krystal Haddock drives the lane against Northern Guilford’s Christina DeLisa Tuesday night in the opening round of the 3A state playoffs.

The D.H. Conley boys’ and girls’ basketball teams both went down to the wire in exciting, nail-biting contests Tuesday night, where it looked at times like their seasons would end. Thanks to some clutch play, each team pulled out a win in their 3A state playoff openers at home.

Having won every game this season by at least 16 points, the Vikings had yet to be challenged all season long. Northern Guilford gave Conley a challenge and then some, and Conley head coach Ben James said he saw his team grow as a result of it.

“We grew a lot mentally because the other team wouldn’t go away. Normally teams against us, they quit when we get up 10. This team didn’t quit and we stayed the course,” James said.

The undefeated season nearly came to an end in upset fashion. Silver knocked down two free throws to put Conley up seven with 53 seconds left in the game before back-to-back 3-pointers from Northern Guilford closed the gap.

When Silver hit two more free throws to go up three with 15 seconds left, it seemed like this time the game was iced. Still, Northern Guilford responded with a game-tying 3 with five seconds left to send the game into overtime.

Finally, Silver’s free throws with 30 seconds left in overtime to put Conley up five sealed the game for good. The Vikings outscored Northern Guilford 11-4 in the overtime period.

Trinity Adams put in 18 points, Carson Fleming had 15 and Krystal Haddock 11 to round out Conley’s four players in double figures. Adams particularly came up big in the playoff game, more than doubling her season scoring average of 8.7 points per game. James said it was her best game in her two years at Conley.

“I saw players do things they haven’t done all year because they didn’t want it to be their last game,” James said.

In the second round, Conley will meet Asheboro, which defeated Chapel Hill 65-49 Tuesday night. James said Conley will prepare mentally for its second-round game, saying at this point in the season, there isn’t much more that can be done physically to prepare.

“At this point, it’s to survive and advance.”

The boys’ team defeated Southern Durham behind 20 points from junior guard Deontay Joseph. With several teammates in foul trouble late, Joseph scored 16 of his 20 points in the second half to put the Vikings on his back in the fourth quarter. He willed them to victory with a particularly clutch late-game sequence.

Joseph pulled down a rebound, went coast-to-coast and finished a layup to put Conley up 43-42 with just over 2 minutes in the game. He followed that up with another layup for a 45-43 lead with a minute remaining. Finally, he got an offensive rebound off of a missed free throw in the final minute and, after being fouled, sunk two free throws.

“(Joseph) had a couple of misses early in the game but I compliment him because he kept his head up.” head coach Rob Maloney said. “He didn’t get down and then hit some key drives, hit some big free throws for us as well and put us in position to win.”

The Vikings will play Northwood in the second round, after Northwood defeated Rocky Mount 53-46 Tuesday night. Maloney said the Vikings will focus on cutting down on their mental mistakes when preparing for their next game, citing too many errors in offensive execution.

“But,” Maloney said, “we’re happy to be one of the final eight in the east, and we look forward to going in tomorrow and polishing it up.”

The unbeaten Jaguars stayed that way after their 2A opener, thanks in large part to their usual contributors.

The Panthers girls were forced to travel on opening night and returned home with a comfortable win.

Zamareya Jones almost beat the hosts by herself, unleashing 45 points in the 2A opener to go with 11 rebounds.

Behind her, J’Nadia Maye added 18 points and Aquarius Pettaway 11 in the win for North Pitt 12-2.

The Jaguars girls also took care of business in the opening round, winning in blowout fashion.

The big win sets up a third showdown of the season between North Pitt and Farmville Central, which already has beaten the Panthers twice this season.