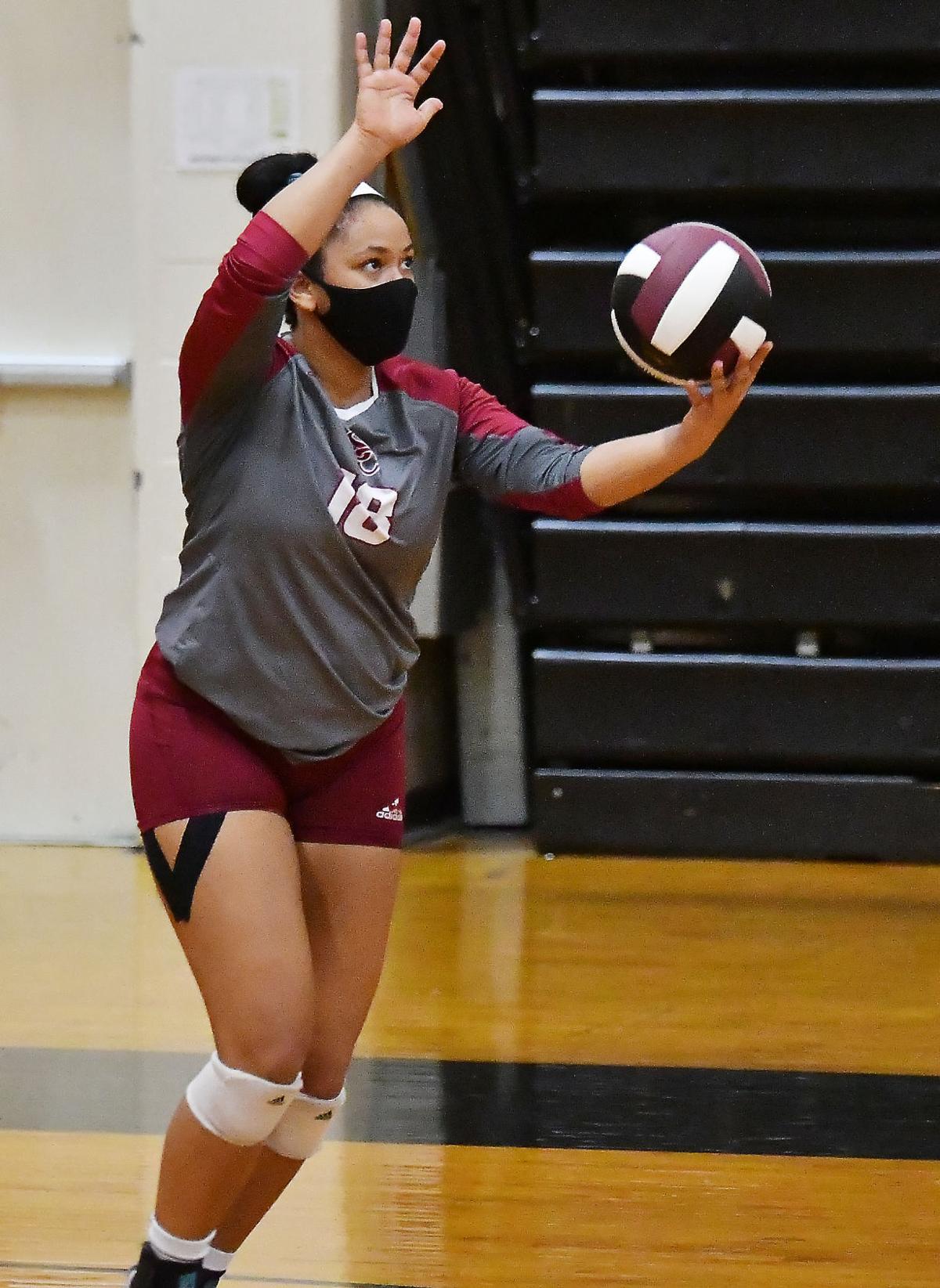 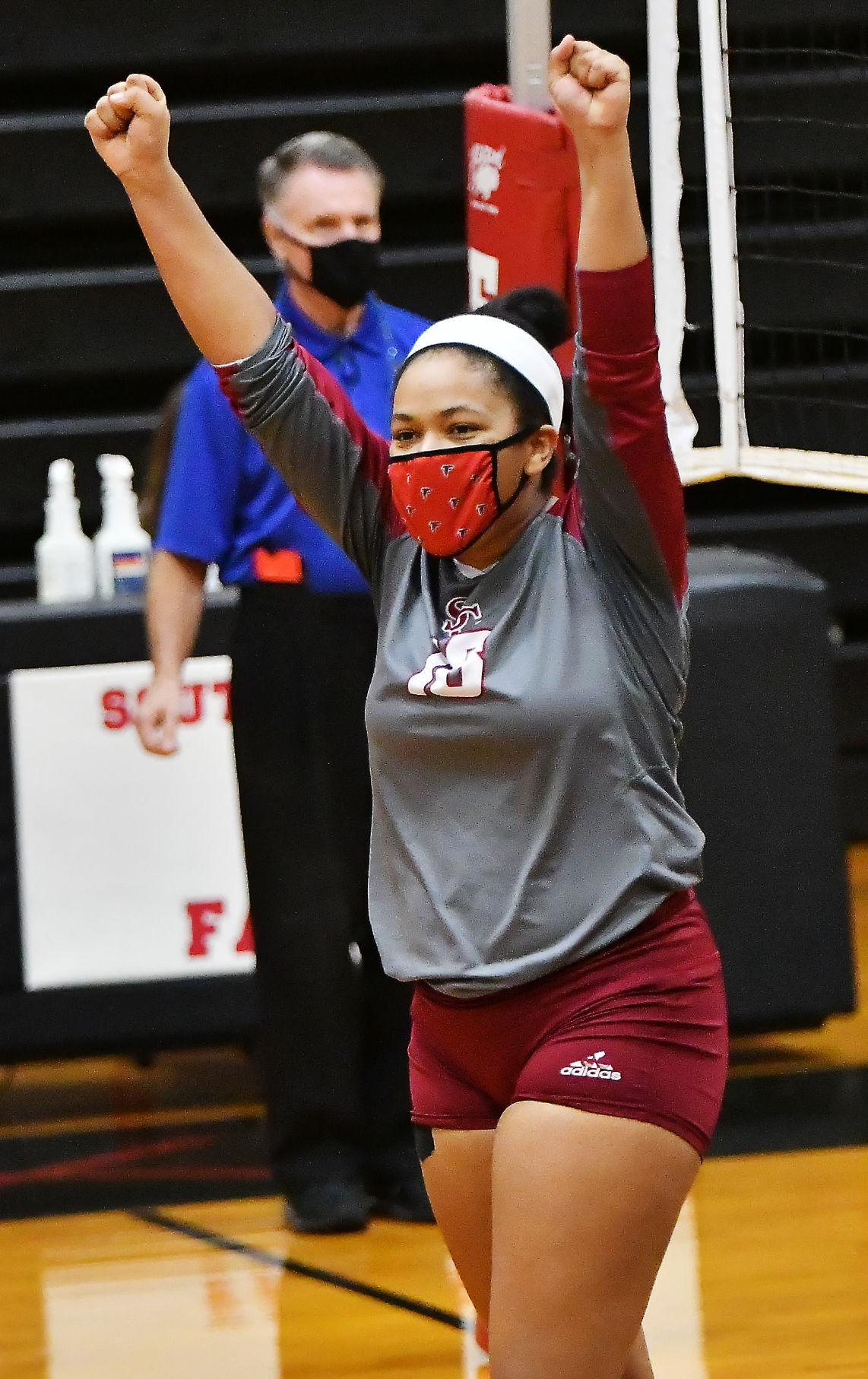 South Central senior hitter Alisa Ruffin celebrates one of her kids against Heritage in the Class 4A state volleyball playoffs Tuesday night. 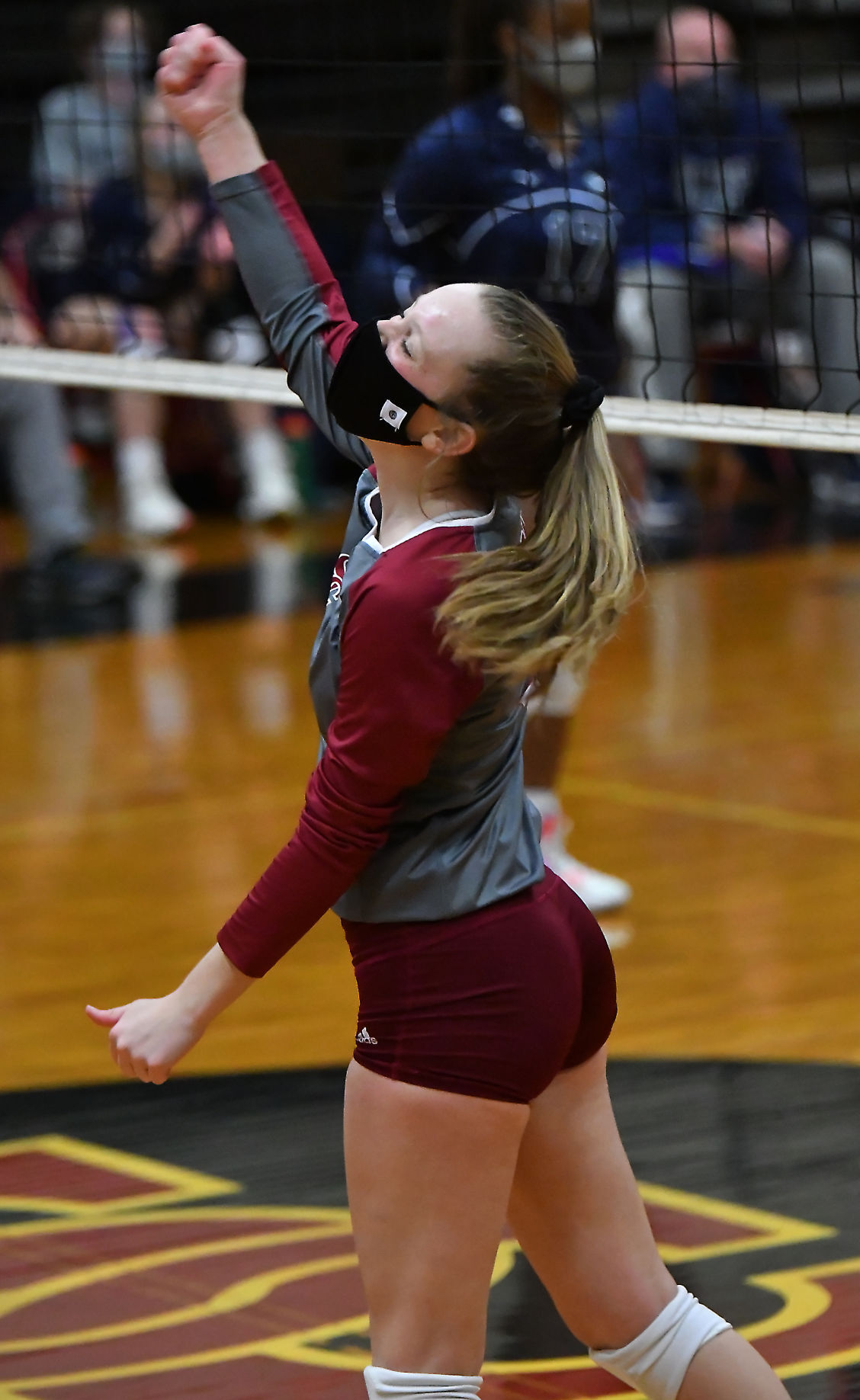 South Central senior hitter Alisa Ruffin celebrates one of her kids against Heritage in the Class 4A state volleyball playoffs Tuesday night.

WINTERVILLE – Senior Carlee Coleman pumped her fist after a kill in the second set.

Coleman and her teammates at South Central decided they wanted their volleyball season to go on a bit longer.

Facing the postseason’s one-and-done scenario, the Falcons sent Heritage packing with a 25-10, 25-21, 21-16 sweep in the first round of the North Carolina High School Athletic Association Class 4-A state playoffs.

South Central, the No. 5 seed in the East bracket, improved to 9-4 overall and will either play at No. 4 Wilmington Hoggard or host No. 13 Fayetteville Jack Britt in the second round on Thursday.

“After losing our last two regular season matches, we wanted to get back on the winning side tonight,” Falcons’ head coach Kayla Ruffin said. “We didn’t have all of our team last week and were missing one big part tonight (middle hitter Kayla McDuffie), but we recovered and everyone stepped up and played their part in helping us win this one.”

Libero Elana Joyner served four points – helped by a kill by Alisa Ruffin and a return by Aniya Grisby at the net – to give South Central a 7-2 lead in the opening set.

With Joyner and Coleman on the back row digging and passing, Alisa Ruffin and Alleigh Johnson were able to set the ball for each other’s attack, and often, they were successful.

Heritage, the No. 12 seed that finished 9-4 overall, couldn’t get much going offensively and gave the Falcons points with missed kills.

A set by Johnson and a kill from Alisa Ruffin doubled the SCHS advantage to 14-7 in the set, and later, five points from Coleman made it 21-9.

Ruffin’s two kills set up a solid serve by Joyner for the final point of the set.

A kill on the second service rotation gave Heritage a 2-1 lead early in the second set – one of only two times it held the advantage in the match.

The visitors eventually took a 13-12 edge, but a play by Johnson at the net tied it at 13-all, and Joyner served six in a row (Alisa Ruffin had two kills and a tap) to give South Central a 19-14 lead.

Heritage was able to cut the deficit to three points four times, including at 24-20, until a kill ended the set with the Falcons ahead two sets to none.

Coleman staked the home team to a 4-1 lead in the final set and later came up with two digs that led to a Ruffin kill to make it 7-3.

With Johnson and Alisa Ruffin major factors on the front row, South Central was able to extend its advantage to 15-10.

A point by Miriam Hardy made it 17-12, and a pair of kills by Ruffin pushed the lead to six (21-15). Joyner served up a point when Alli Rouse added a kill, forcing Heritage to call timeout behind 23-16.

Ruffin’s dig eventually set up Johnson’s kill for point 24, and her set allowed Johnson to finish off Heritage with the final kill to complete the sweep.

“Elaina and Carlee really got us started,” Ruffin said. “We had a long talk about the skill levels and ability they have, and they came out and did what they had to do.

“We have to play every match like it’s our last one now,” she said. “The girls realize each match could be their last one, so they have to play with everything they’ve got – do everything we’ve been working on in practice.”

The top-seeded Vikings played like it in the opening round, sweeping Terry Sanford at home, 25-12, 25-13 and 25-8, to earn another home match on Thursday night.

The Jags will be back in action on Thursday night.

The Ayden-Grifton Chagers dropped their playoff opener in three sets on the road at Carrboro on Tuesday night, ending their season.

No further details were available at press time.