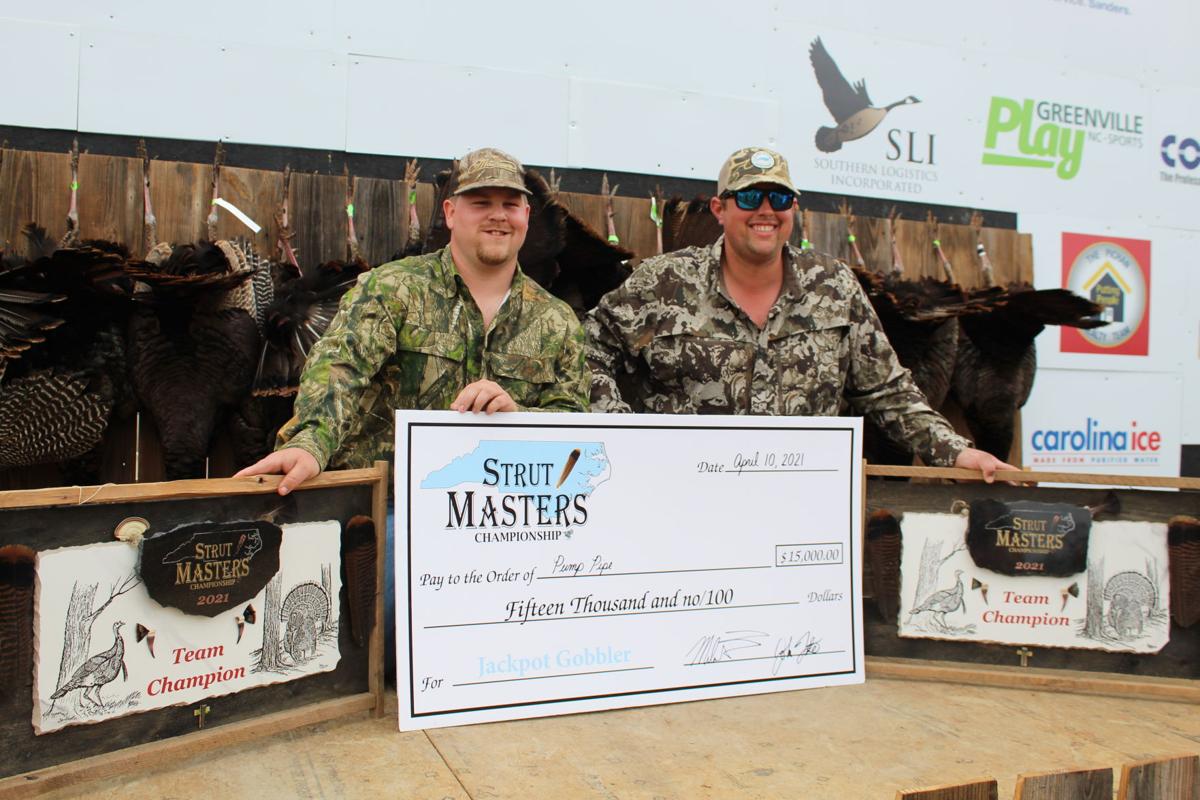 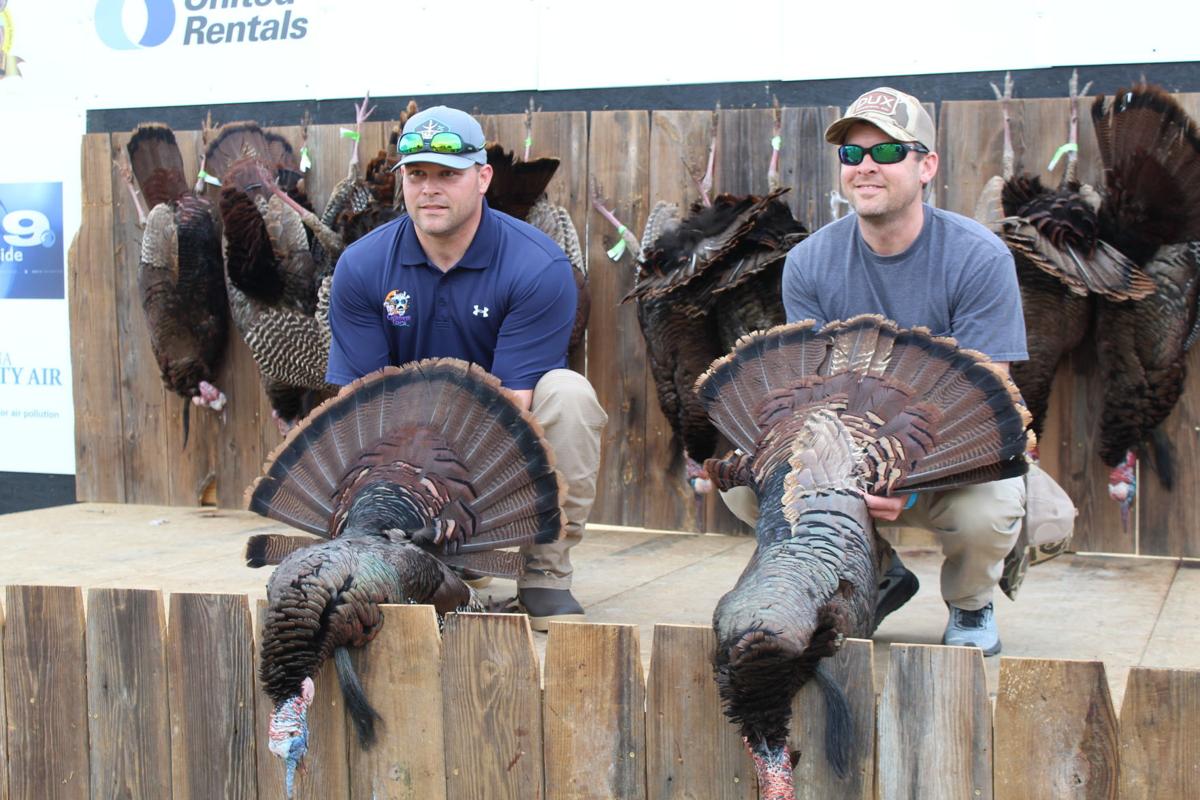 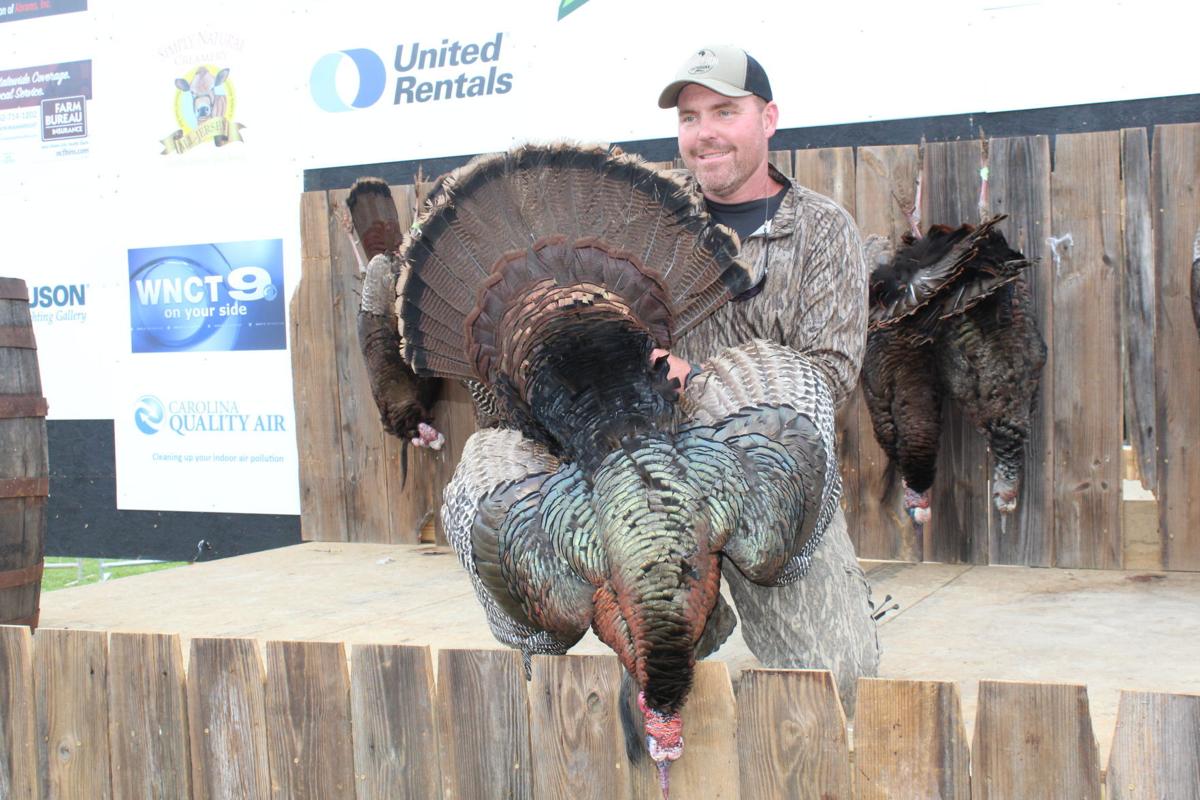 Sterling Pippin of Farmville shows off his bird Saturday.

Sterling Pippin of Farmville shows off his bird Saturday.

A new turkey hunting organization awarded $20,000 in prizes on Saturday after a daylong team event that ended with prizes and country music.

The first competition hosted by NC Strut Masters drew 120 two-person teams. The teams were allowed to hunt birds anywhere in North Carolina and bring them to weigh at R.A. Wood Farms in the Maury area of Greene County.

The team of Carson Knight of Bethel and Joshua Cole of Robersonville took home the grand prize of $15,000 dollars, two blue NC Strut Masters sport coats and bragging rights as they were crowned the first champions for the biggest turkey.

“We knew the bird was there for a few years. We had been scouting hard. We came up with a game plan and executed it this morning,” Knight said. “It was awesome.”

Strut Masters launched the competition this month. Organizers Miles Minges and John Tate said funds raised will support the NC Pirate Classic, which they started in 2016 to introduce youth in North Carolina to turkey hunting.

Saturday’s event drew both amateur and professional hunters and allowed for some participants such as Ike Christian of Winterville to kill their first bird.

“I’ve been wanting to hunt my whole life,” said Christian. “It was pretty awesome. I didn’t sleep last night. I’ve been excited all day.”

Sterling Pippin of Farmville has been hunting for 20 years. He finally got his bird an hour before the cutoff time of 5 p.m.

“I like to eat them,” Pippin said. “They are just a fun bird to hunt. They put on a show when they come in.”

Entry fees were $200 per person and $400 per team. More than 20 local and national sponsors also participated.

Clayton Jones of Snow Hill said it was good hunting. “It was not the exact bird I was going after. “We heard them all morning and got them. It is more of an adrenaline rush whenever the turkeys come in.”

Chris Tyndall of Rocky Mount and Dwayne Lewis of Nashville turned in two birds on Saturday. Not expecting to win with their young birds, the team was still excited for the competition.

“When they are coming in, you can’t tell the difference between a 2-year-old bird and a 5-year-old bird,” Lewis said.

Tyndall added, “I’m not a fan of Carolina, but I’d wear that blue jacket.”

Also garnering awards were the team of Kevin Autry of Farmville and Rich Kessler of Winterville. Kessler and Autry took home a $2,500 prize for a largest bird with multiple beards and $1,000 for the largest bearded hen.

“It was wild. They are very rare — both bearded hens and multiple beard birds are anomalies,” Autry said.

Kesler added, “It was a dream come true. It’s better to be lucky than good.”

Jeff Braxton took home a $500 prize for having the first bird off the roost.

“We did a little bit of calling. Ten minutes later, it was history,” Braxton said.

The event also featured music from country artists Nate Hosie, Dustin Lynch, Tyler Farr and Rhett Akins, along with others, raffles and a silent auction. Sam Jones Barbecue provided lunch for the hunters.

“I think it’s good. It brings the community together and allows people to try something new and get into the sport. You get to meet new people and it’s a good way to keep the conservation,” said Thomas Jones of Walstonburg.

Colby Short of Halifax added, “It was awesome. There is nothing better than turkey hunting and celebrating it.”