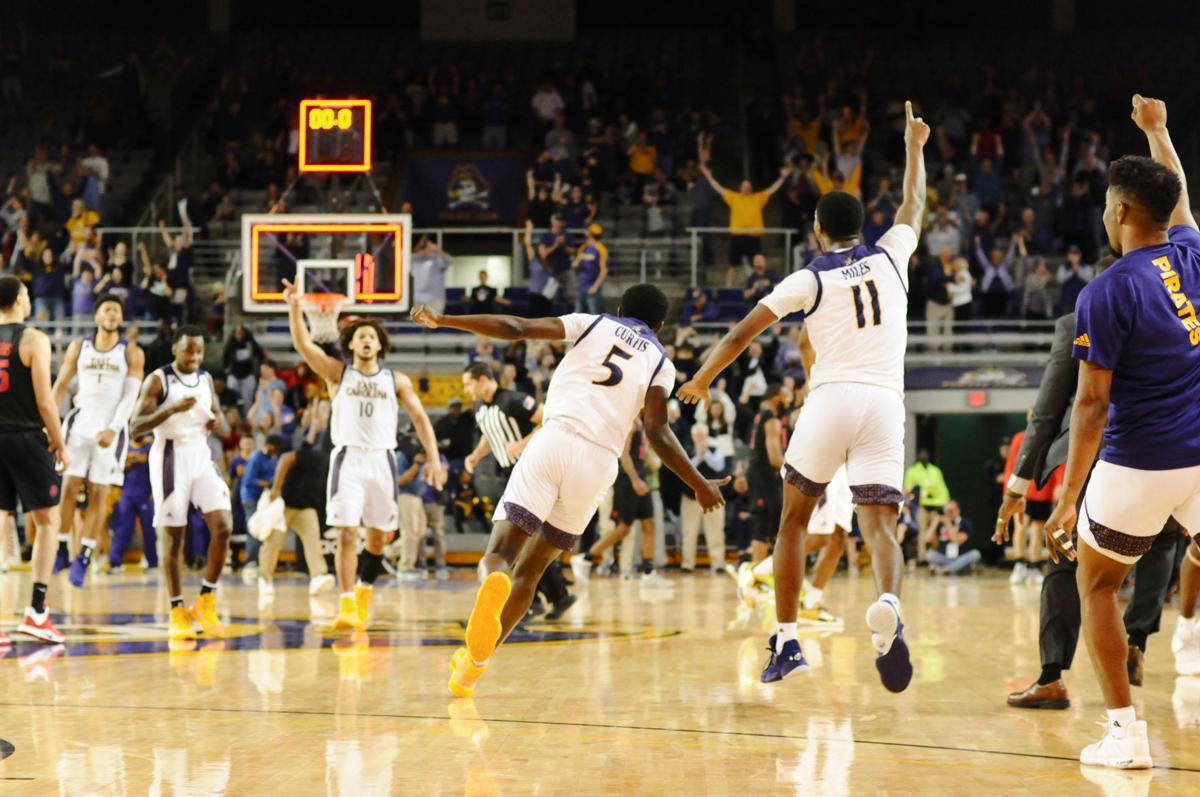 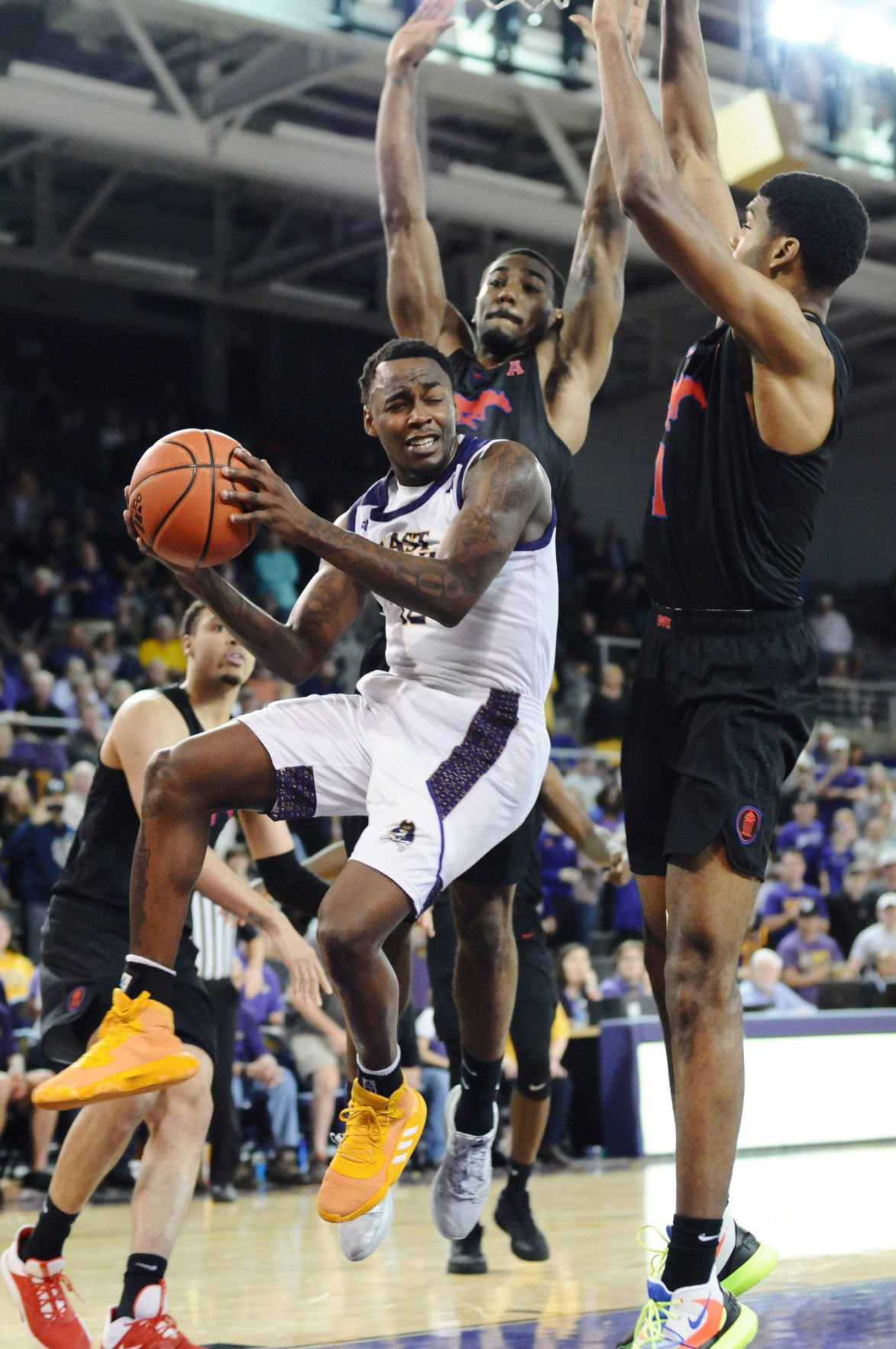 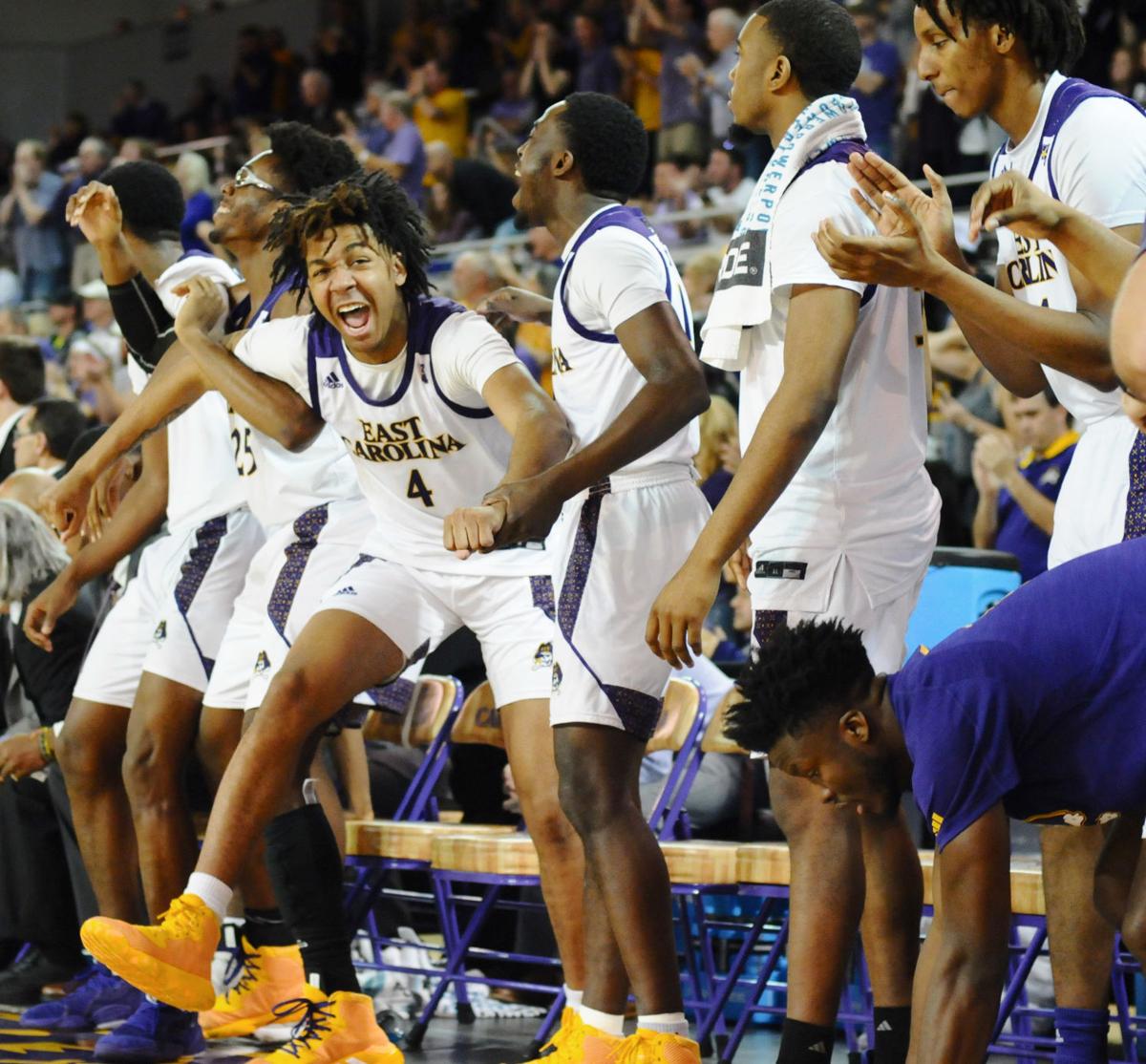 East Carolina's bench reacts after ECU takes the lead during the final minute against SMU on Saturday in Minges Coliseum. 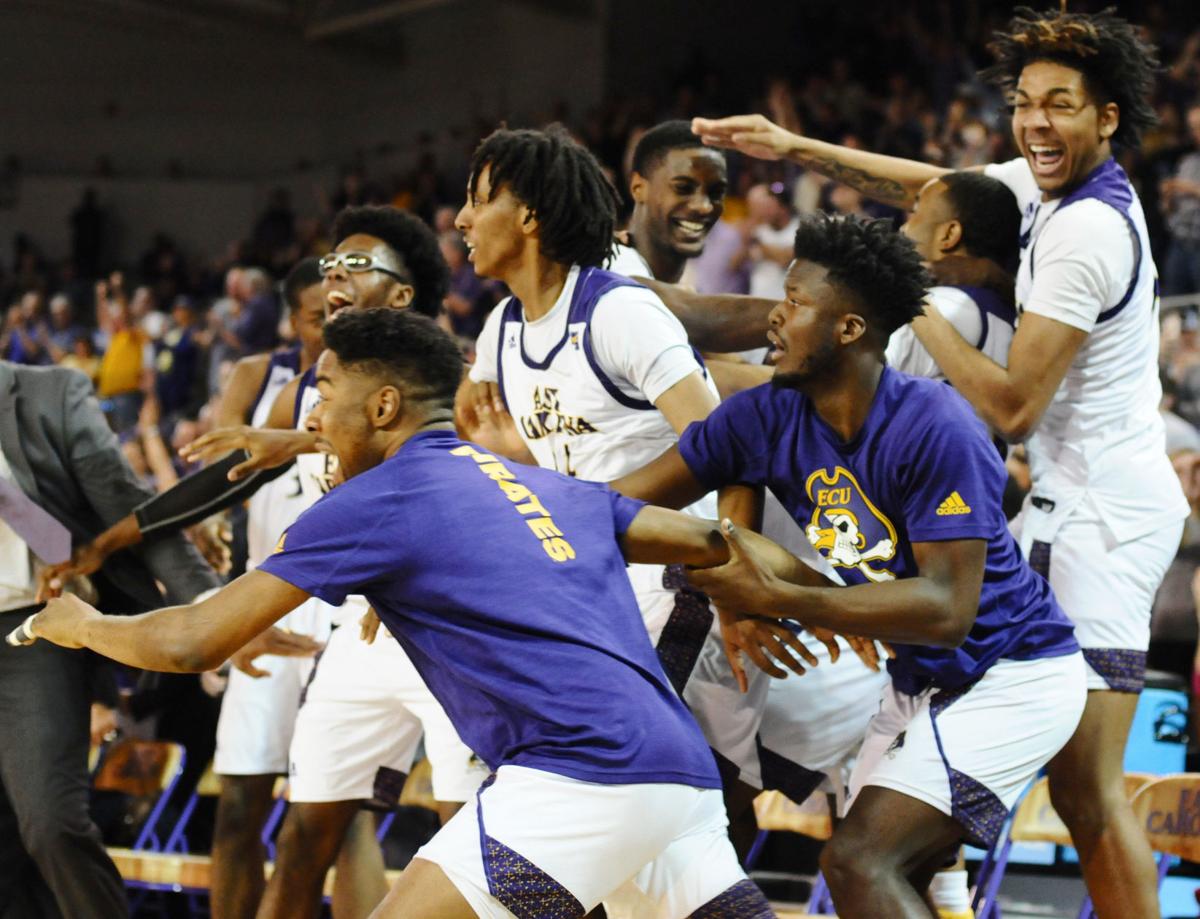 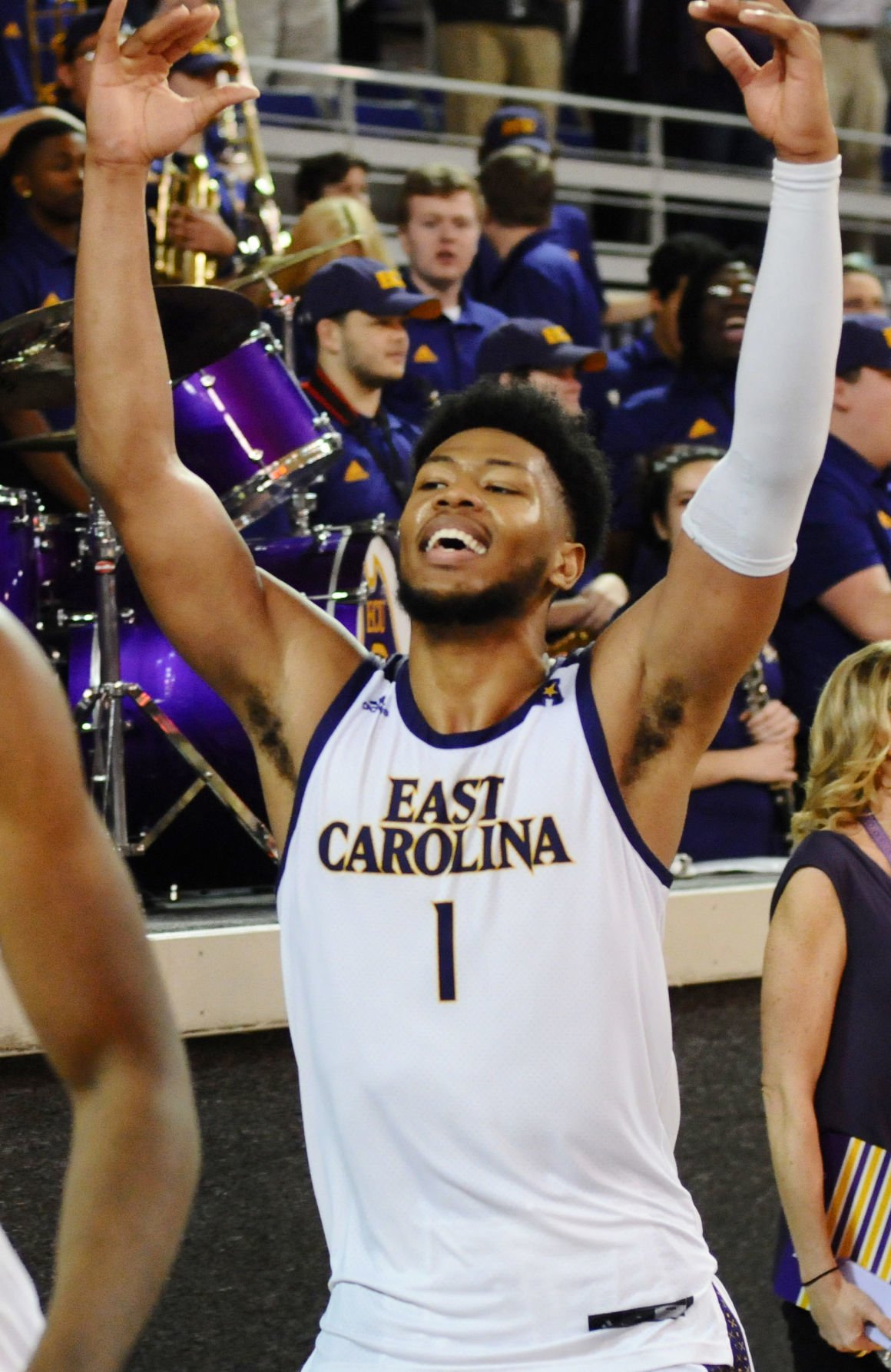 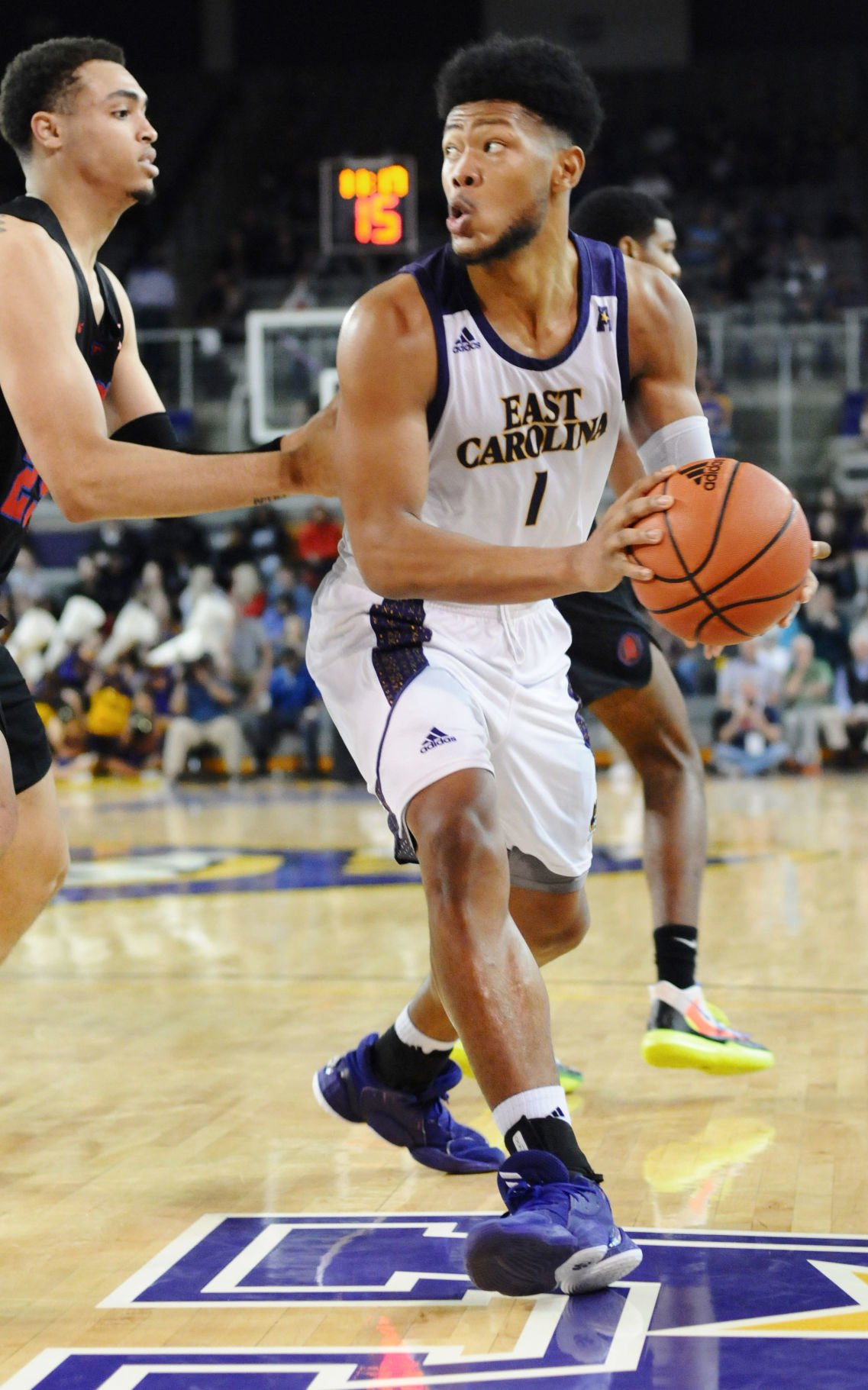 East Carolina’s Jayden Gardner eyes the basket against SMU on Saturday. The 6-foot-7 sophomore forward paced the Pirates with 20 points, and his 21.3 point-per-game averages is tops in the American Athletic Conference. 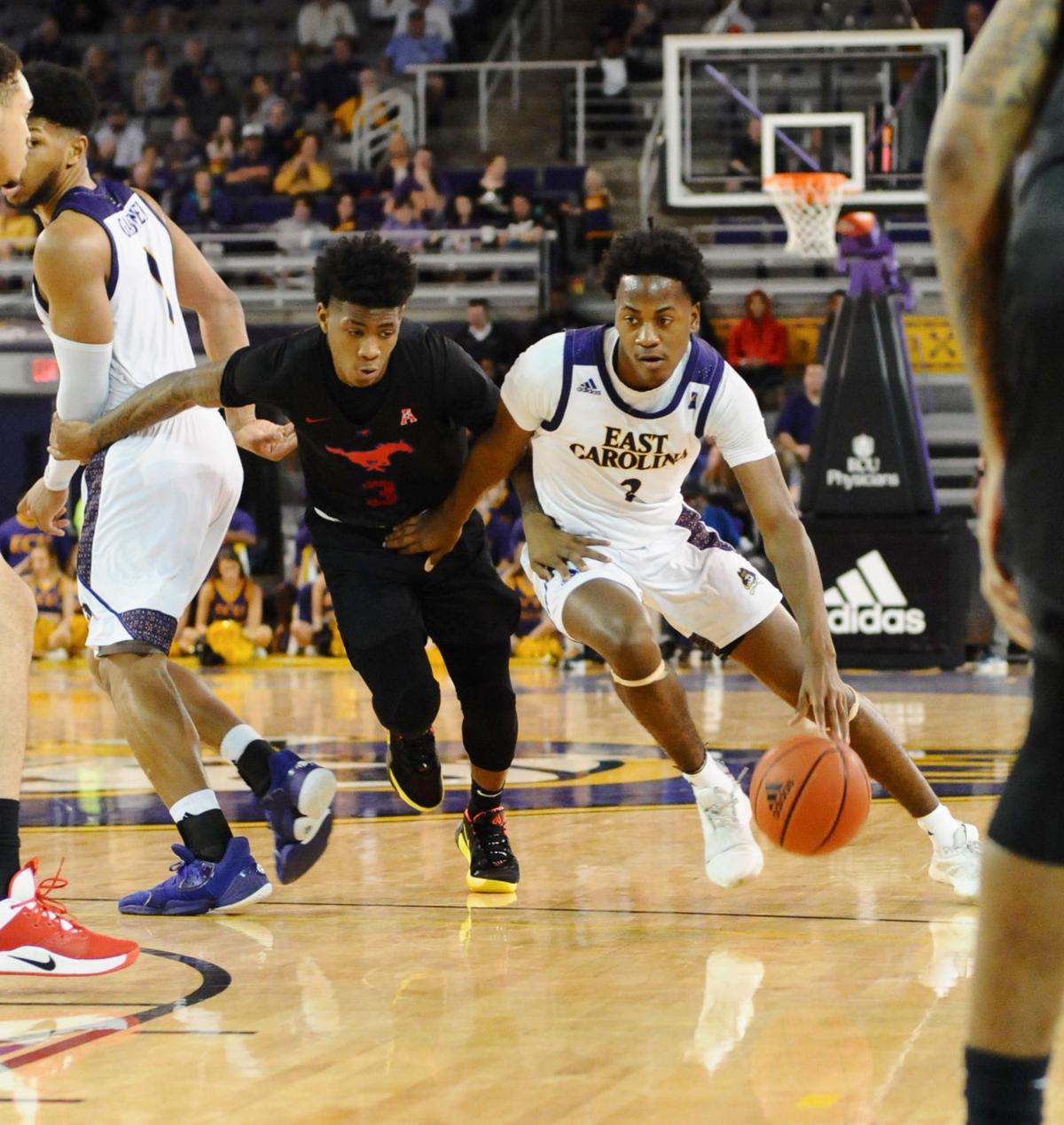 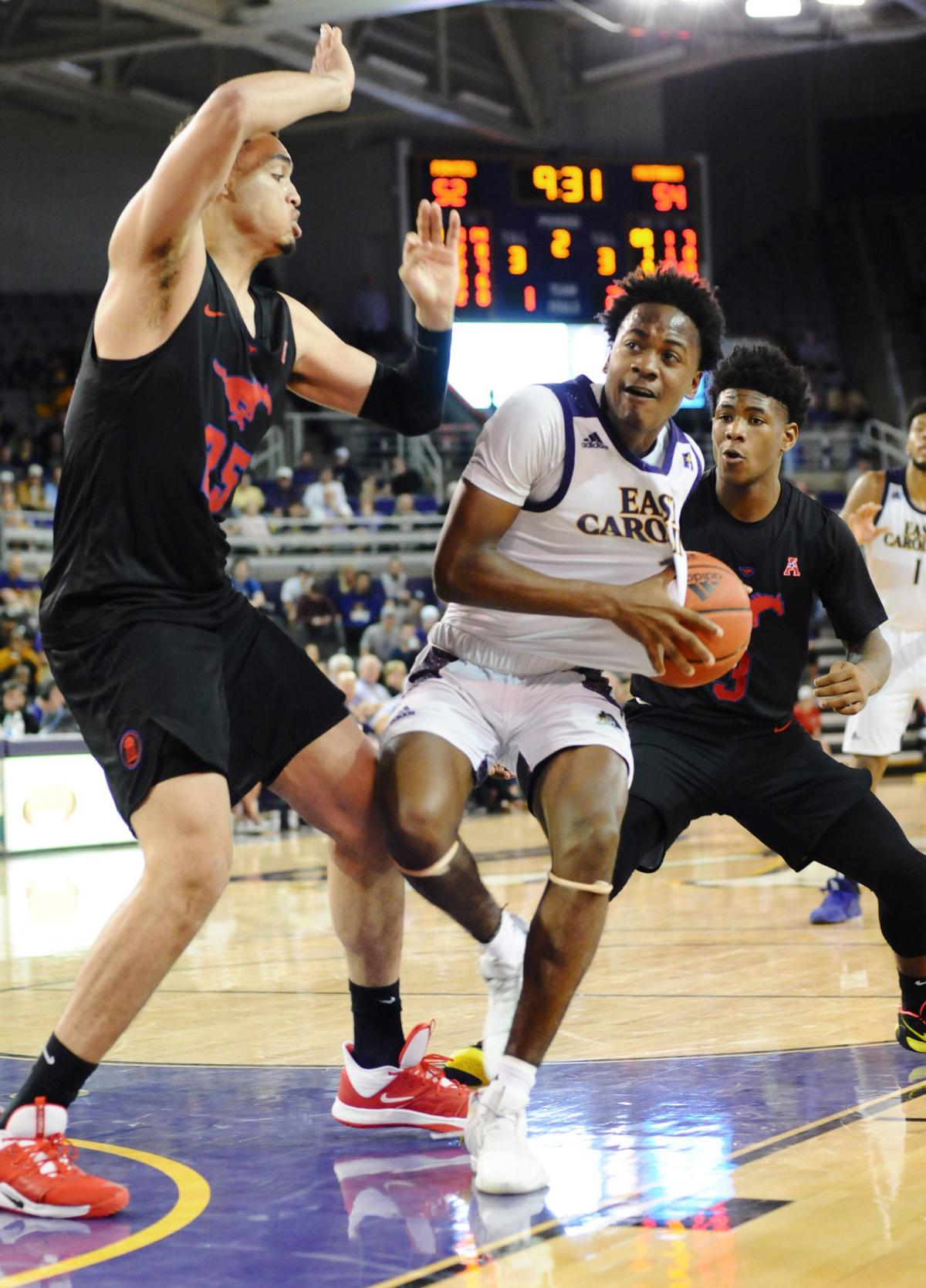 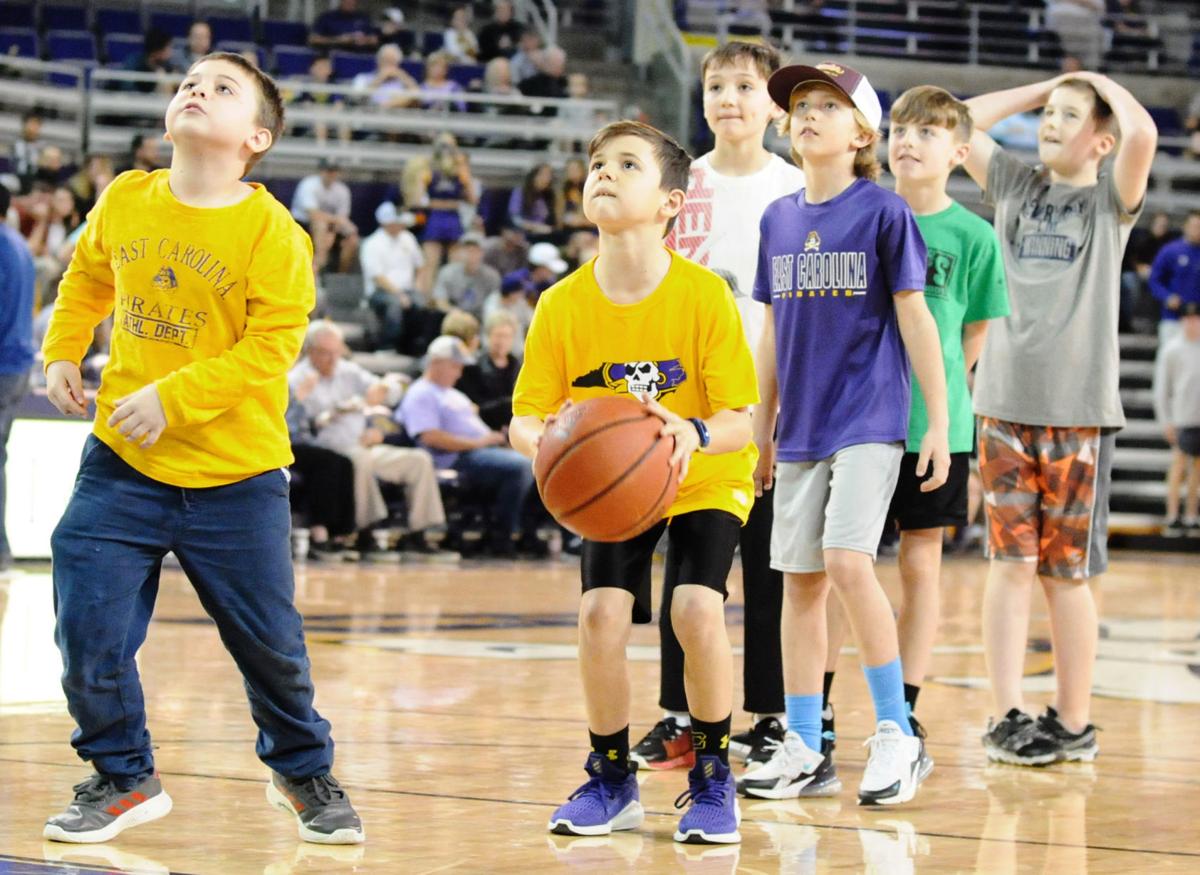 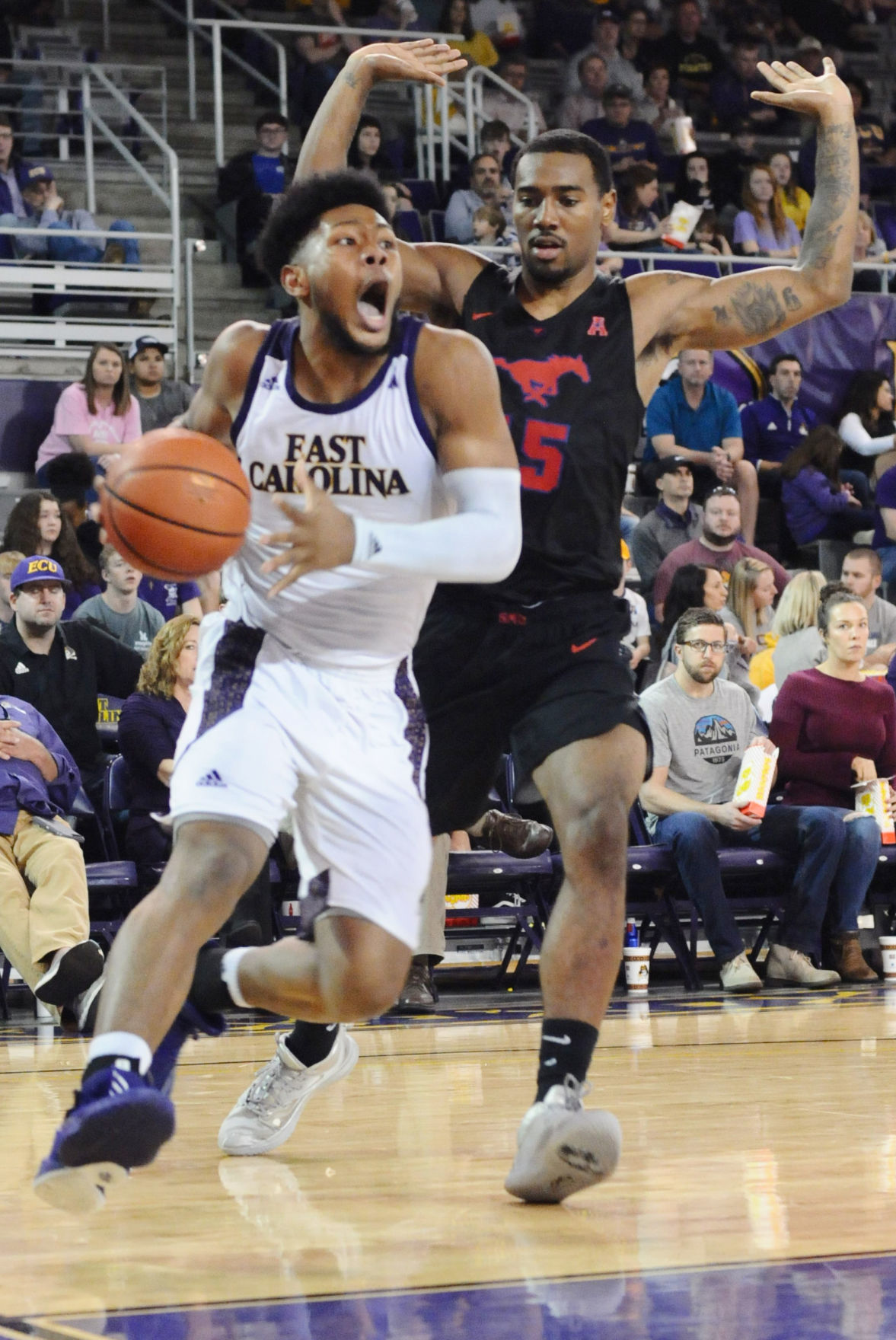 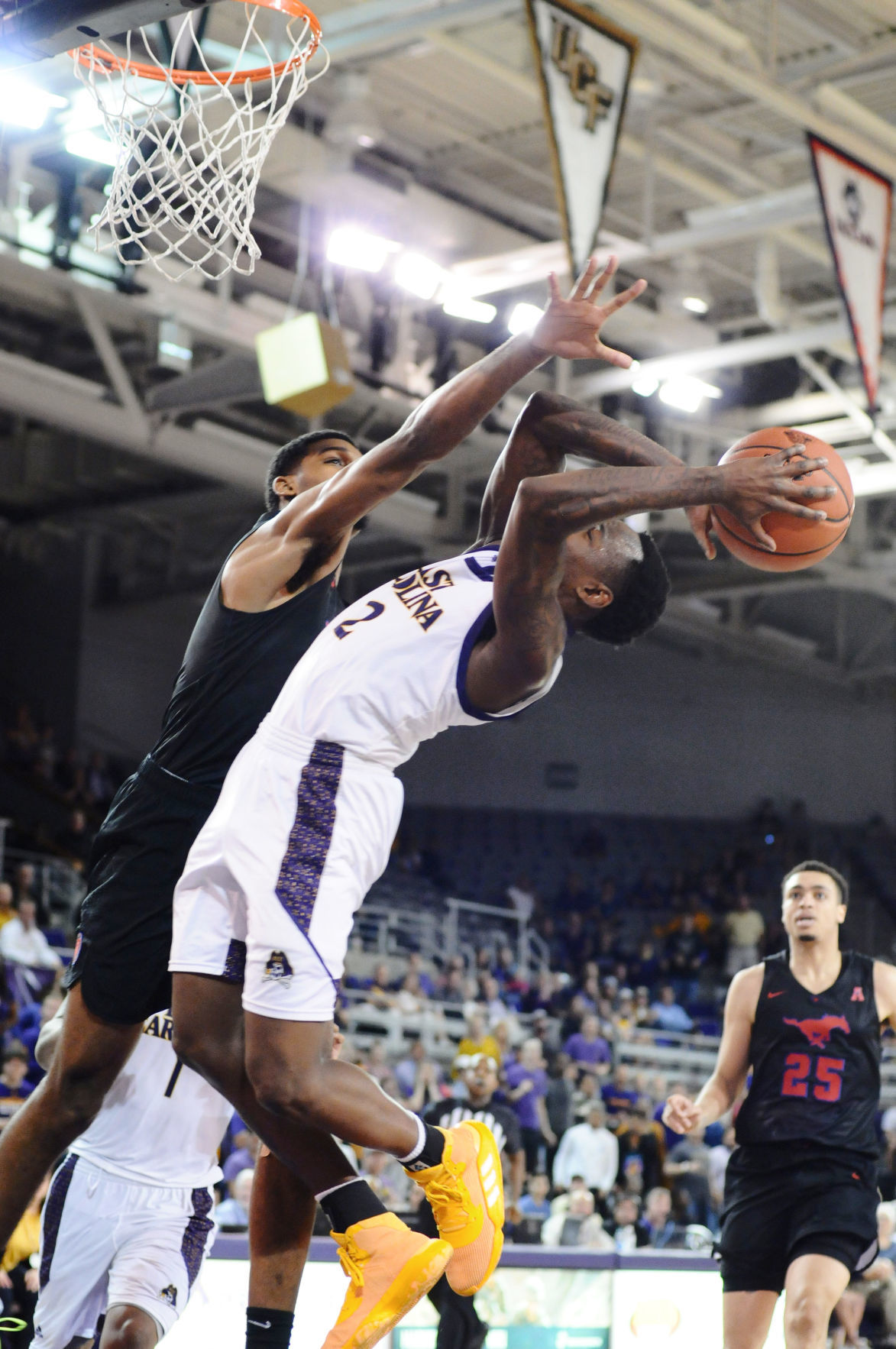 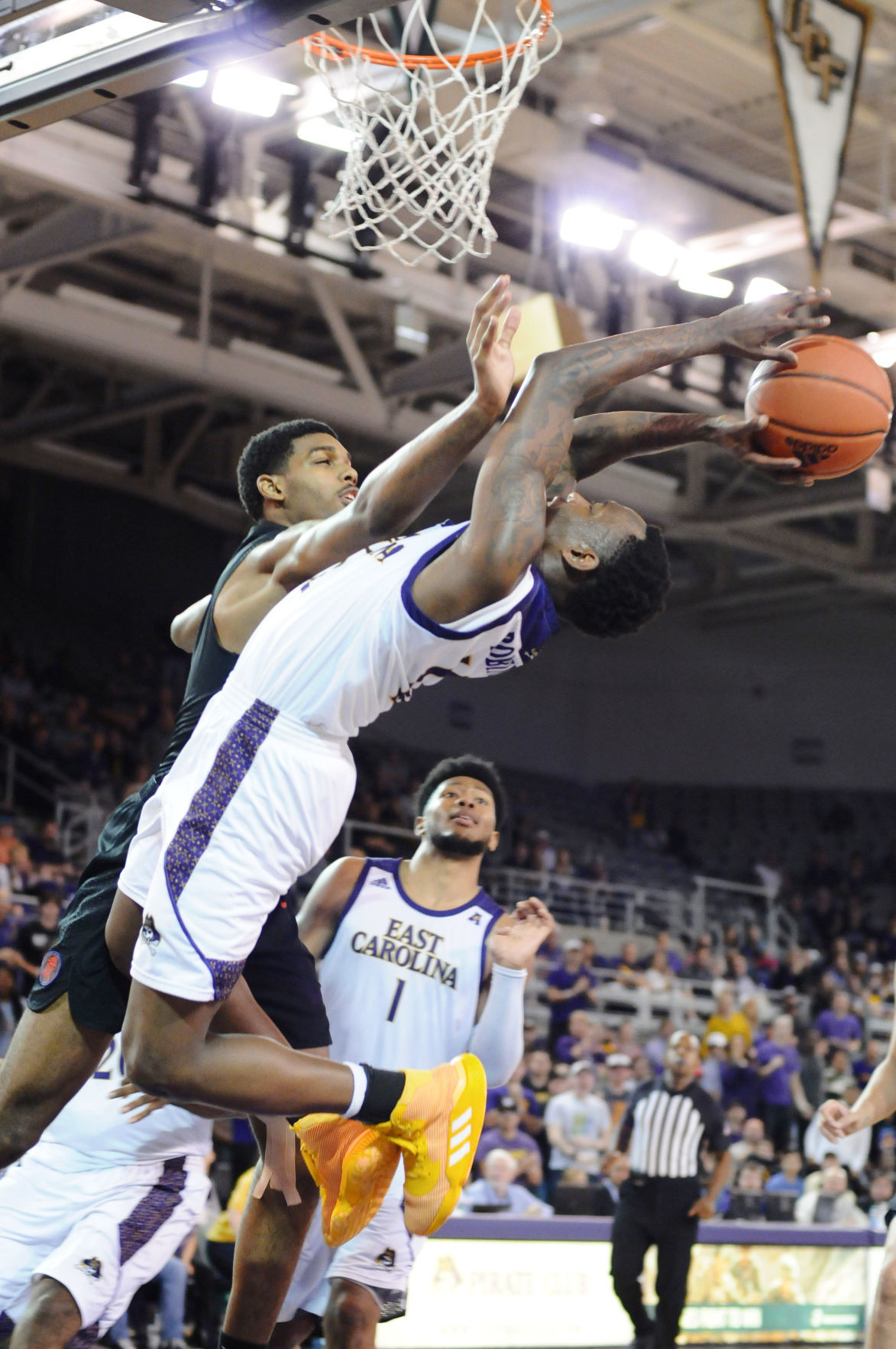 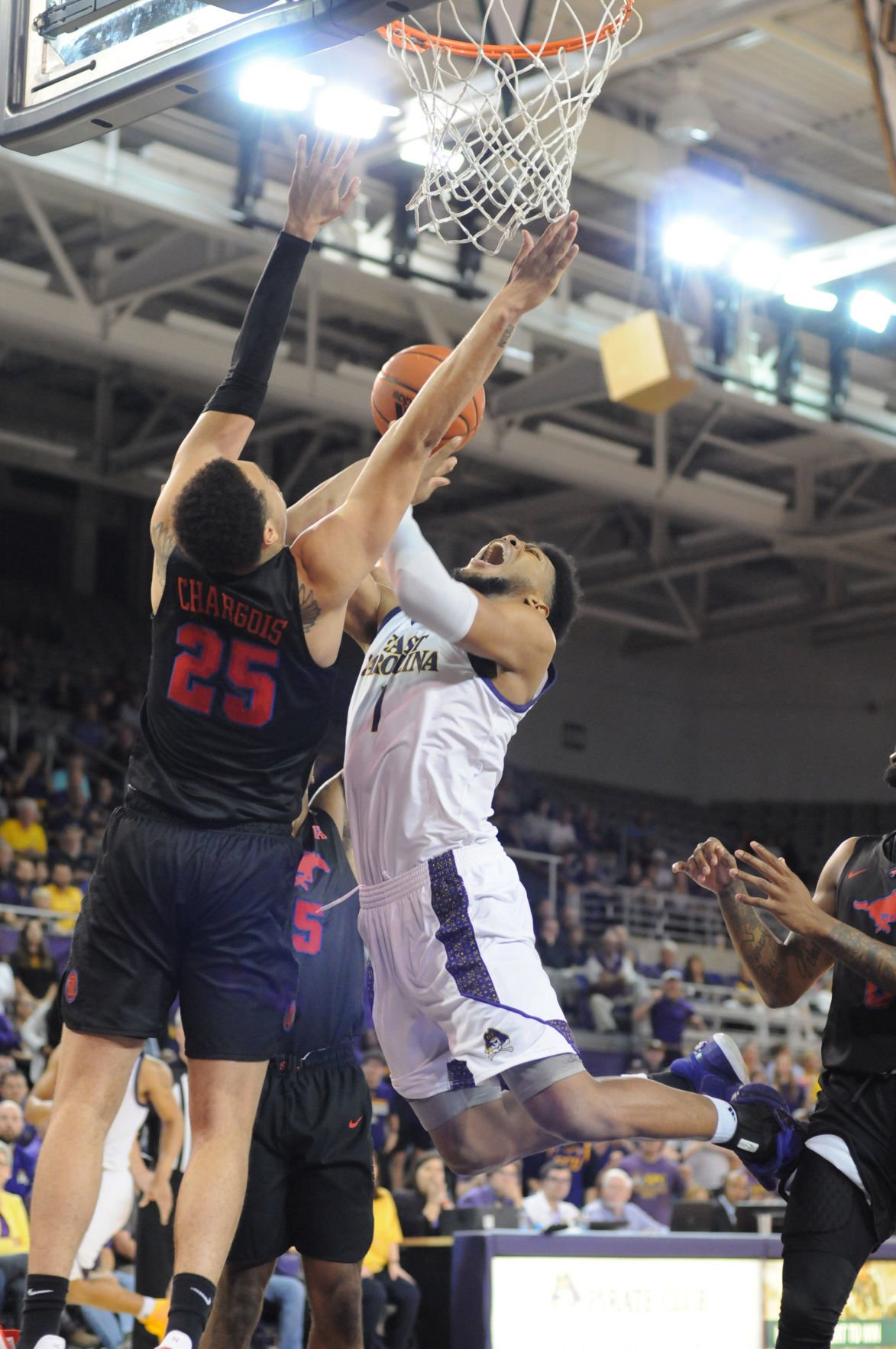 East Carolina's bench reacts after ECU takes the lead during the final minute against SMU on Saturday in Minges Coliseum.

East Carolina’s Jayden Gardner eyes the basket against SMU on Saturday. The 6-foot-7 sophomore forward paced the Pirates with 20 points, and his 21.3 point-per-game averages is tops in the American Athletic Conference.

Tristen Newton was a junior at Burges High School in El Paso, Texas, when East Carolina hired Joe Dooley as its basketball coach in April 2018 and Dooley urged that, “Basketball needs to be important at ECU.”

Before, during and after Newton’s game-winning 3-pointer Saturday to upset SMU, 71-68, basketball looked plenty important in Minges Coliseum.

Tremont Robinson-White’s pass went to Newton, a freshman, in the corner of the court with 5.5 seconds remaining and the game tied 68-68. He launched the ball and it circled around the rim once and dropped through the hoop with 2.7 seconds left.

Bitumba Baruti immediately raised his hands from under the rim, in the exact moment and motion as the season-high 4,014 fans in Minges celebrated what was about to be a sixth straight home victory by the Pirates (8-8) and for a 2-1 record in the American Athletic Conference.

“I didn’t know they called timeout, so I was trying to get back on defense,” said Newton, one of three Pirates to score 11 points, of his reaction to the winning shot. “Then the bench came out and everything. It was a lot.”

SMU (12-3, 2-1) missed a half-court heave at the buzzer to finalize its first-ever AAC loss to the Pirates.

Adding to the Pirates’ final offensive possession was their best player, Jayden Gardner, not touching the ball. The sophomore forward, who leads the AAC in scoring, finished with 20 points and nine rebounds, but he drew attention and was somewhat of a decoy for Newton’s winning shot.

“Jayden set a good screen and Tremont got going downhill,” Dooley said. “If they didn’t help on the drive then he could have had a layup. Once he got around the corner, they helped and he threw the ball to Tristen. Obviously Tristen made a huge shot.”

ECU trailed by 13 points during the first minute of the second half, but the hosts got hot from the outside in timely fashion. They made 5-of-15 3-pointers after halftime despite coming into the game averaging 5.4 made 3s per game.

A few of them came with Gardner on the bench for a quick breather near the midway point of the second half. J.J. Miles’ triple in transition made it 55-54 with 8:11 left. Baruti swished a long jumper for a 57-57 tie before Gardner re-entered at the 6:48 mark.

Fans helped motivate the home team during the Pirates’ second-half rally and other decisive moments. The game was tied at 66 and at 68 during the final 1:19.

“I remember last year there was barely anybody here and barely any noise,” Gardner said. “It starts with us working hard and practicing every day. It is finally translating to wins. Pirate fans want to see wins.”

For Newton and other first-year Pirates, the win provided a new experience on ECU’s home court.

“I didn’t know it could (get that loud),” said J.J. Miles, a junior transfer from Cape Fear Community College.

ECU won despite battling foul trouble in the first 20 minutes, especially to Baruti and starting center Charles Coleman. SMU was 15-of-18 from the free throw line in the first half and finished 20-for-24.

“Our guys responded at halftime and we rallied,” Dooley said. “We just chipped away and chipped away and obviously we had some guys make some big plays, culminating with Tristen’s shot. There also were a number of them before that (shot) that got us in that spot.

“We’re scratching and clawing and making baby steps. We want to get to the point where we can compete night in and night out, and I think the guys are trying to do that and we still have a ways to go, but we’re gaining on it a little bit at least.”