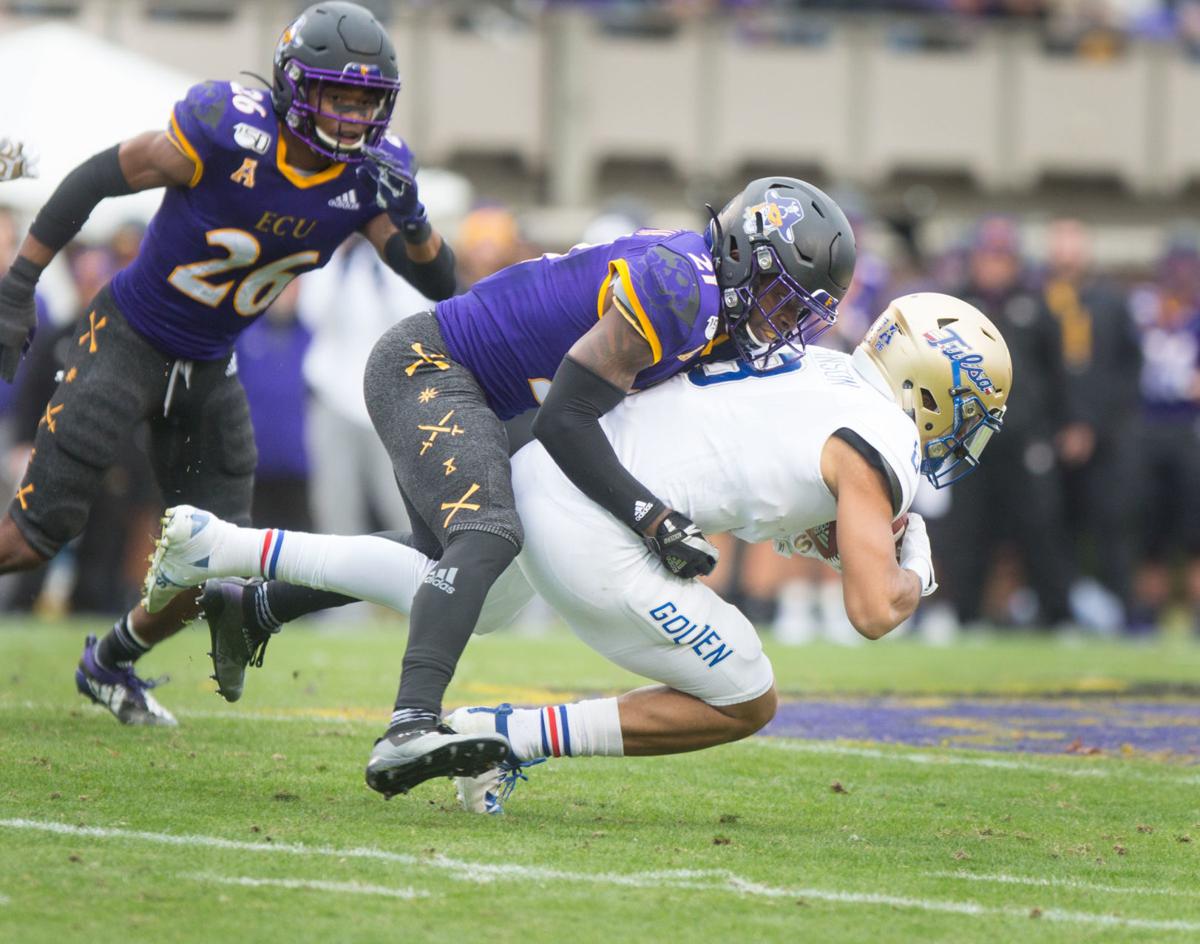 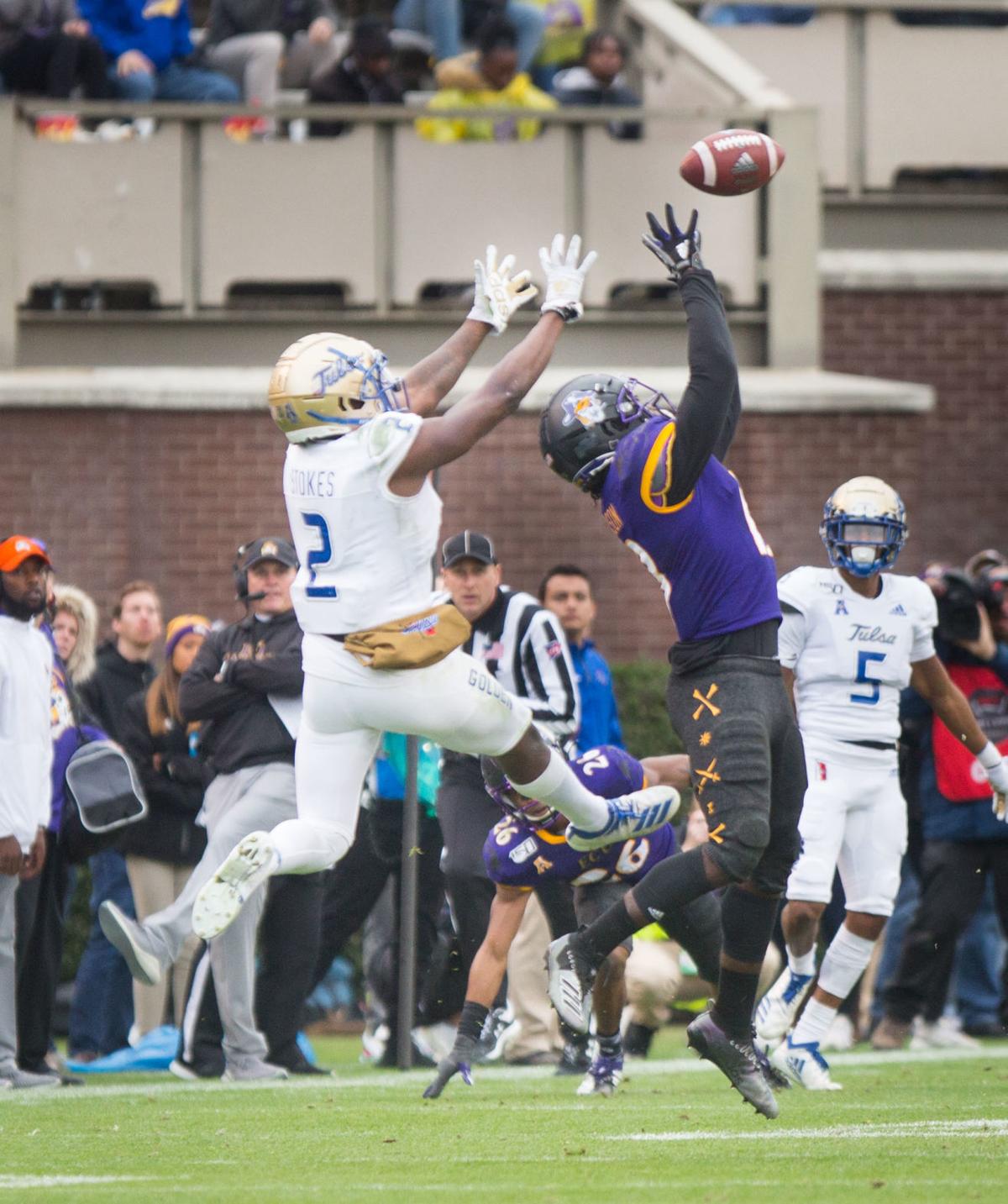 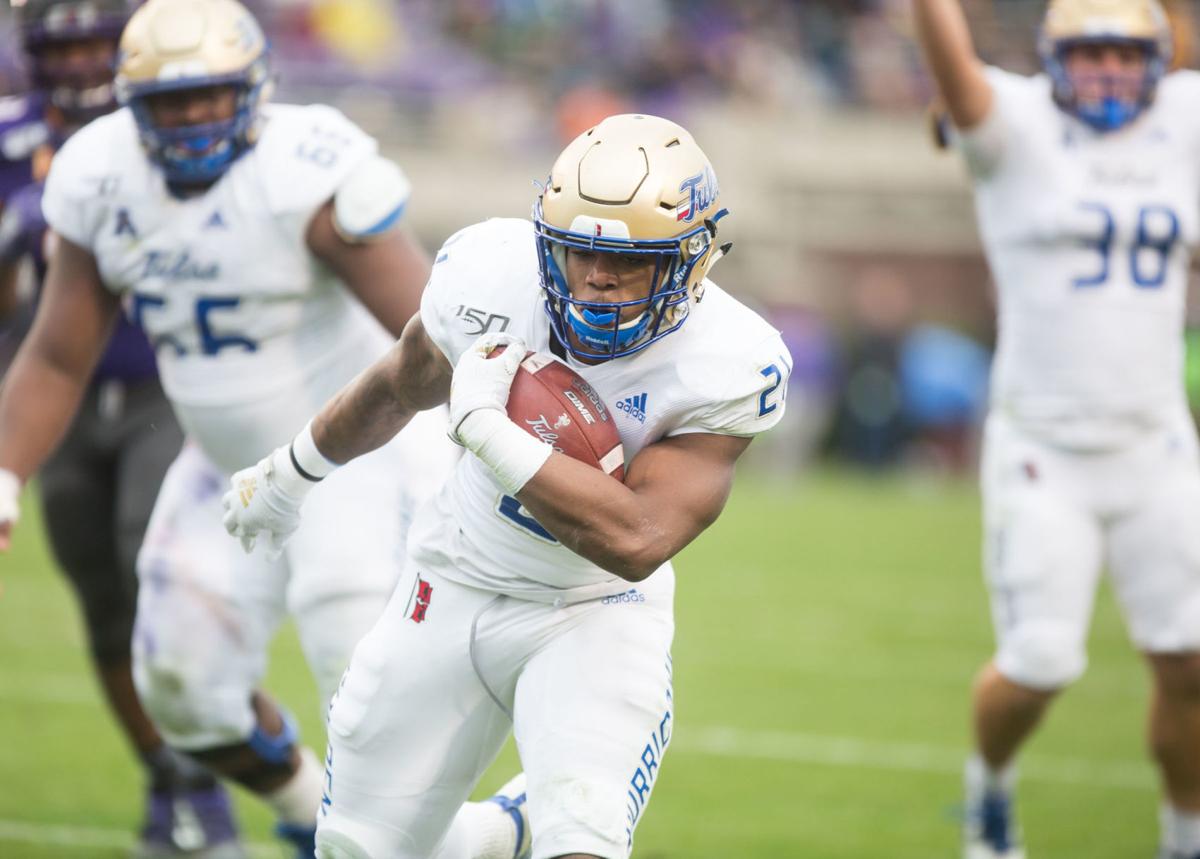 Tulsa's TK Wilkerson scores a touchdown during a game against East Carolina on Nov. 30, 2019. 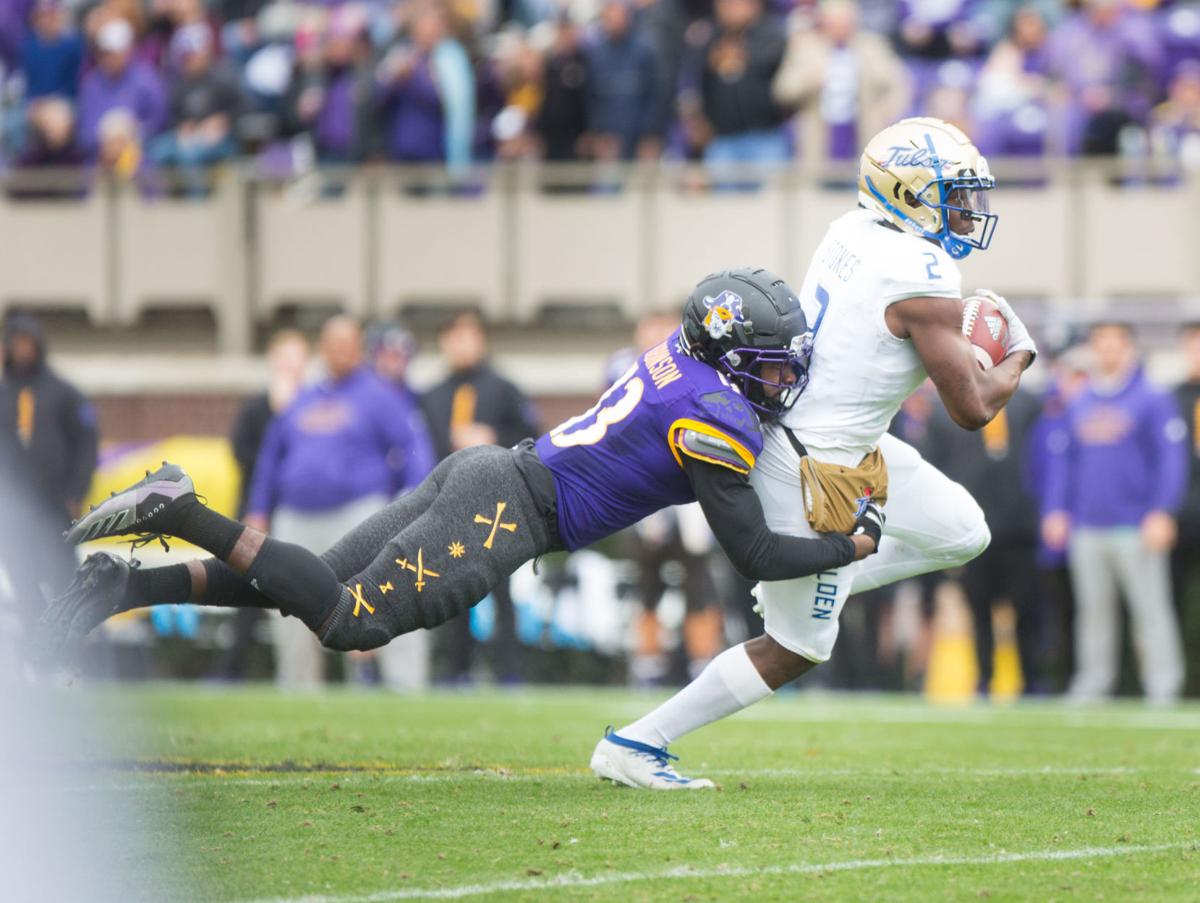 Tulsa’s Keylon Stokes, right, is tackled by East Carolina’s Tank Robinson at Dowdy-Ficklen Stadium during the Pirates' final game of 2019. 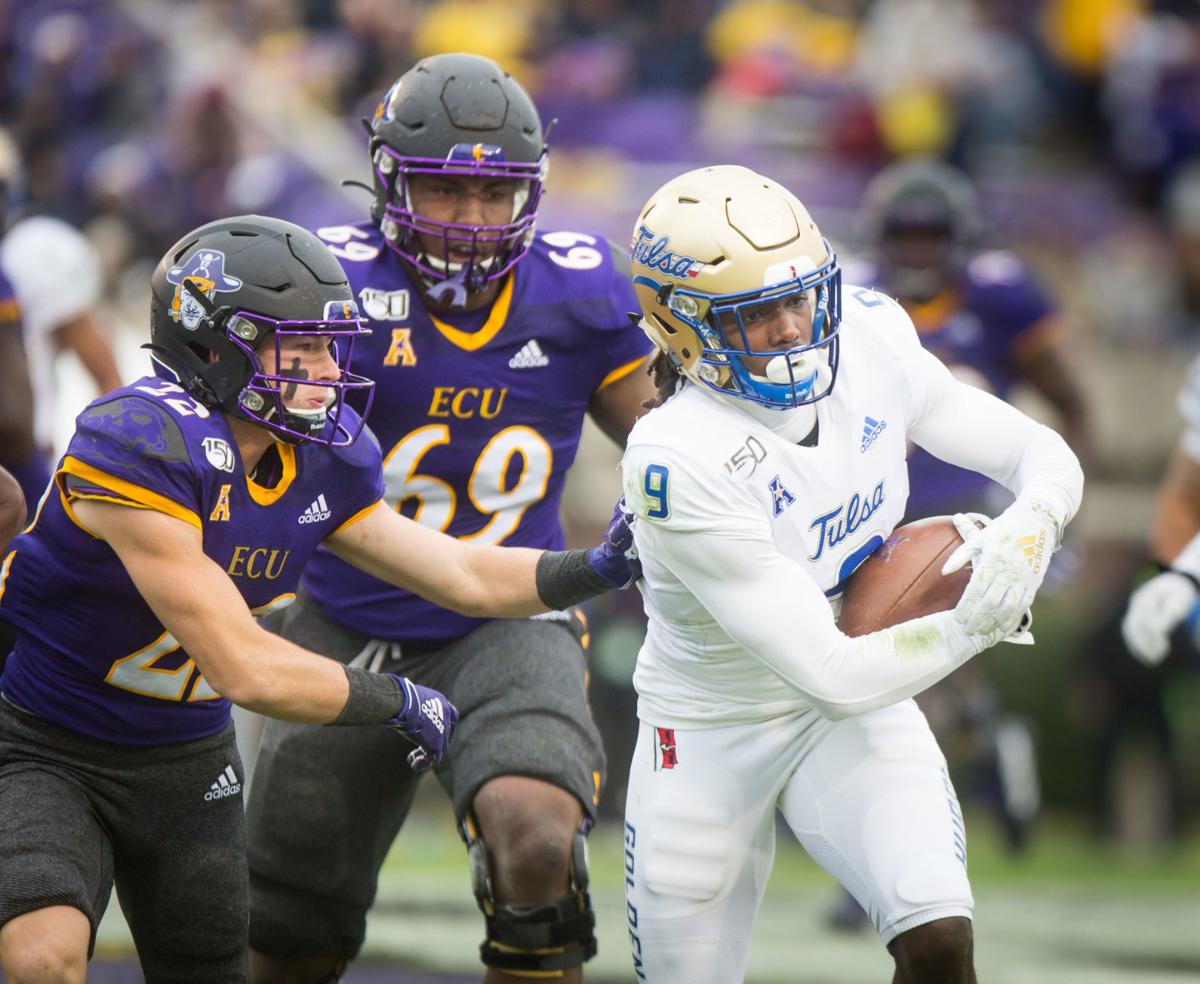 Tulsa's TK Wilkerson scores a touchdown during a game against East Carolina on Nov. 30, 2019.

Tulsa’s Keylon Stokes, right, is tackled by East Carolina’s Tank Robinson at Dowdy-Ficklen Stadium during the Pirates' final game of 2019.

Even as East Carolina’s football offense showed steady improvement throughout the season, the Pirate defense never was able to show the same, and it was visible again in the team’s season finale on Saturday, a sluggish 49-24 blowout loss to Tulsa at home in which the hosts could not get enough stops.

ECU (4-8, 1-7 American Athletic Conference) entered the game on the heels of its second Football Bowl Subdivision win this season against Connecticut and while the offense that energized ECU late in the season sputtered to just a field goal in first half, the defense was unable to make up for it.

The Pirates yielded touchdowns on three straight drives in the half and trailed 21-3 at intermission, and they allowed two touchdowns apiece in the second, third and fourth quarters. Tulsa totaled 669 yards of total offense.

With no more time left on the clock this season, the planning for next season started immediately.

“Certainly, philosophy-wise, myself and my predecessor (former coach Scottie Montgomery) are drastically different in what we envision we want on that side of the football,” Houston said of the defense. “You look at our size versus the size of most of the teams in this league and we’ve got to continue to develop our guys. We’ve got to develop our guys in the interior, in the trenches, in the secondary.”

As has been the case for a long time for a Pirate team that has not played in a bowl game since 2014, big offensive plays by Tulsa quickly muddied the waters on a damp day. After ECU took a brief 3-0 lead in the first quarter, Tulsa responded in two plays, the second of which was a touchdown heave of 66 yards by Zach Smith (331 pass yards, five TDs) to Sam Crawford Jr. to make it 7-3 Hurricane.

After that, ECU struggled to keep pace. One drive later, Keylon Stokes burned the ECU coverage on the inside lane for a 29-yard TD reception, and after Smith went over the top to Josh Johnson to get inside the ECU 5, he then zipped a TD pass amid little pressure to Keenen Johnson to make it 21-3 late in the second quarter.

Tulsa (4-8, 2-6) ran up 381 yards in the first two quarters before flirting with 700 for the game, a sign there is still plenty of room for improvement for the ECU team that entered the game ranked 104th nationally in rush defense, 104th in pass defense, 103rd in scoring defense and 108th in total defense.

Later in the third, Tulsa began grinding the Pirates down with its running game, capping another scoring drive to counter ECU’s first TD of the game.

“You look at a lot of the big plays today, it’s frustrating when you call things that should take away those (big plays),” Houston said. “If you make offenses work to move the football, that’s when you have success. But explosive plays ... it’s easy to sit up here and point fingers, and I don’t want to do that, but we’ve got to do a better job. We’ve got to develop a certain edge on that side of the football.”

The Pirates weren’t without some big plays, including Tank Robinson’s interception early in the third quarter. One play later, however, the offense fumbled it away and Tulsa smashed home its fourth touchdown in five drives, a short TK Wilkerson rush, to make it 28-3.

Some of the other big plays — namely a key fourth-down stop and a forced fumble by the Pirates in the first half — came from senior defensive linemen playing in their final games.

Finding new talent at all the defensive position groups will be critical on the Dec. 18 National Signing Day and into the offseason.

“Nobody wants to go out like this in their last game,” said nose guard Alex Turner, one of 16 Pirates honored on senior day.