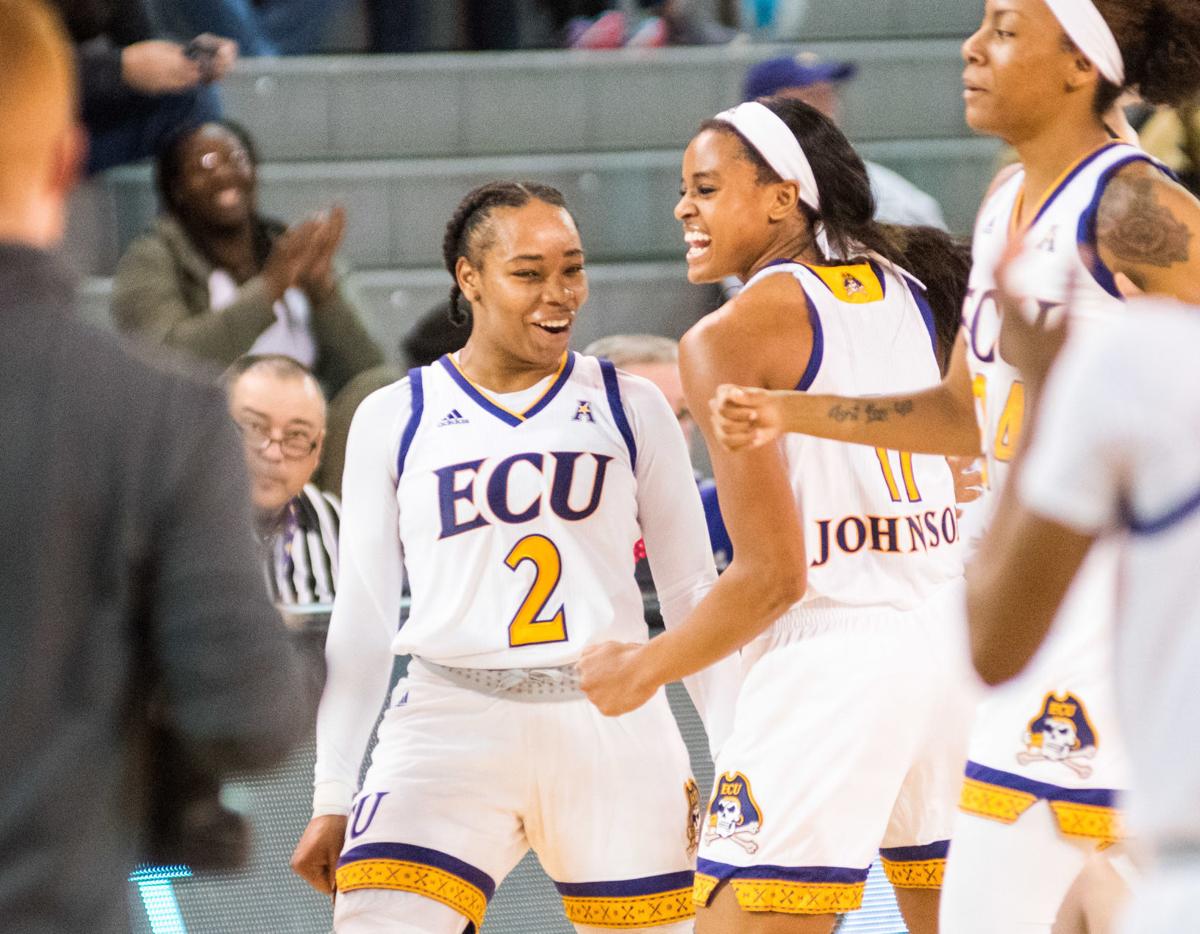 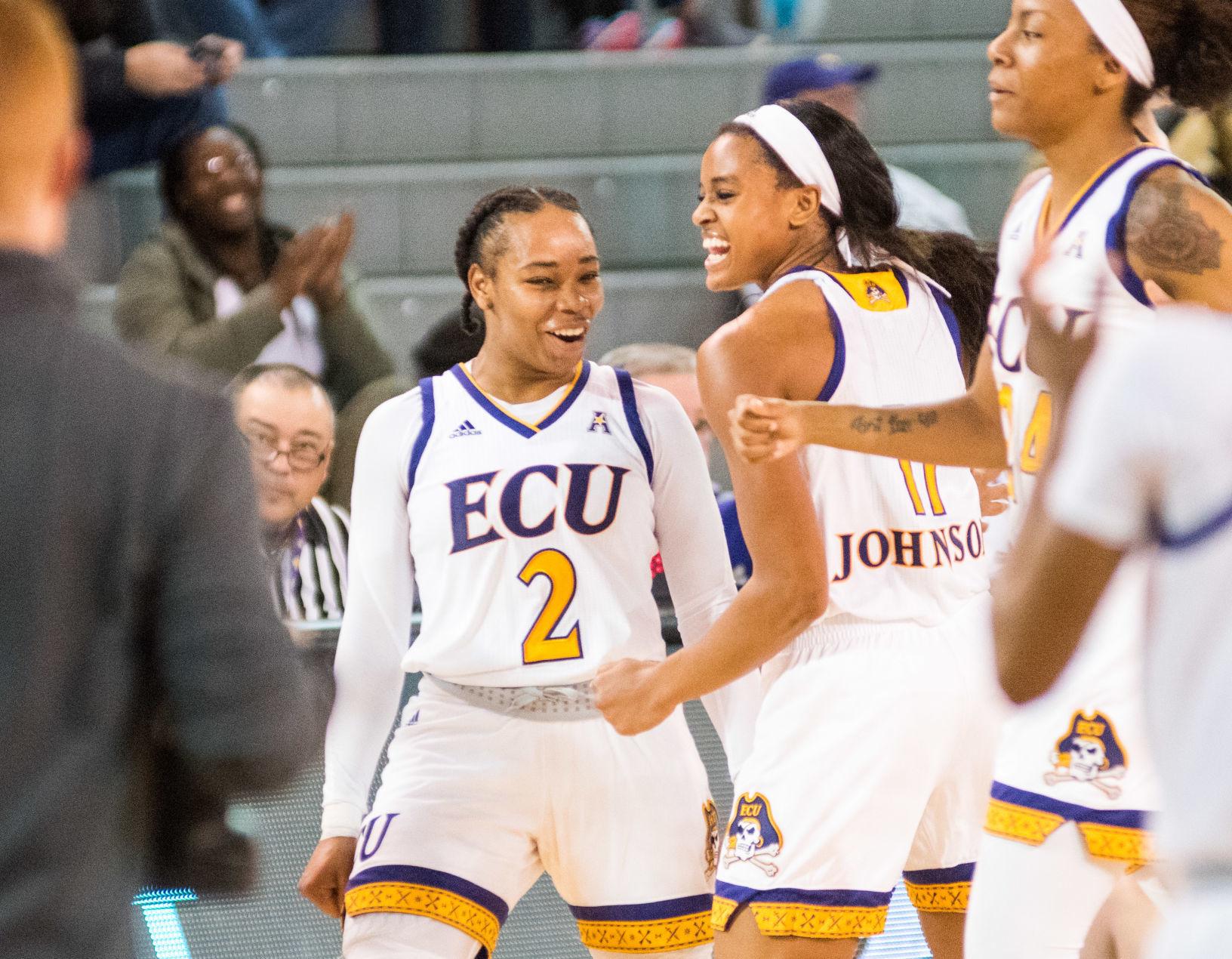 The East Carolina women’s basketball team’s first season under coach Kim McNeill in a rebuilding year has included teaching moments during a 12-game losing streak and in last-second defeats.

Those moments recently for ECU have centered around building on victories, which the Pirates did Wednesday night when they beat Tulsa 59-42 in Minges Coliseum for a 4-2 record in their last six games. ECU (7-18, 4-8 American Athletic Conference) surged into the lead during a dominant 20-2 second quarter and led by double digits for the entire second half, avenging a 58-56 loss at Tulsa on Jan. 21.

“We said that February was going to be our best month,” McNeill said. “We’re finally putting some things together and understanding how to keep a lead. ... It’s great just seeing these kids happy for a change, and not coming in that locker room being sad and crying, but seeing us be happy for each other to get the win.”

Pirate junior point guard Lashonda Monk scored a game-high 17 points, but her nine steals were more important to the ECU record book. She passed Toina Coley (1988-93) as the program’s all-time leader in that regard.

“It felt good and I didn’t even know I was that close,” said Monk, who has 55 steals this year and 293 for her career. “I came into a timeout and one of my teammates said I needed two more steals and I was like, ‘Two more steals for what?’ I honestly wasn’t aware, but teammates had my back and I think my coaches wanted me to get it too. It felt good for everybody.”

The Pirates enjoyed a 27-3 advantage in points off turnovers.

ECU’s 18 straight points in the first half began with a basket by Dominique Claytor for the final points of the opening quarter, then the Pirates went on a 16-0 run that lasted most of the second quarter. The game-changing surge reversed a 16-6 deficit and made it 24-16 ECU.

The Pirates led 28-18 at halftime after a putback by Necole Hope, and they were up by as many as 20 points late in the fourth.

Monk had five steals by halftime. She grabbed the record-breaking steal near midcourt during the final minutes and was substituted out moments later to an ovation by teammates, coaches and fans.

“She has another year to go, so she’s going to make it really hard for anybody to beat it,” McNeill said. “I think she just has a natural gift for it, with the energy she brings on defense and her instincts. ... Some things you can’t teach, like her athleticism and intangibles and ability to react and break on balls. She loves it, and sometimes it’s hard to find a kid who loves to play defense and loves to get steals.”

The ECU men’s team responded after trailing at halftime to go toe-to-toe with host Memphis down the stretch before ultimately surrendering a 77-73 loss to the Tigers.

The loss spoiled a 23-point, 13-rebound double-double night from Tristen Newton, and ECU also got 16 points from Jayden Gardner in the loss.

Memphis led 33-27 at halftime, but separate second-half runs of 9-2 and 10-2 saw ECU suddenly back in the hunt. The Pirates trimmed the deficit to two twice before a couple of Newton free throws tied the game at 60-60 with 6:23 to play. The score was tied again, 69-69, with 2:18 left, but the Pirates could never get into the lead and Memphis was able to ice the game from the line.