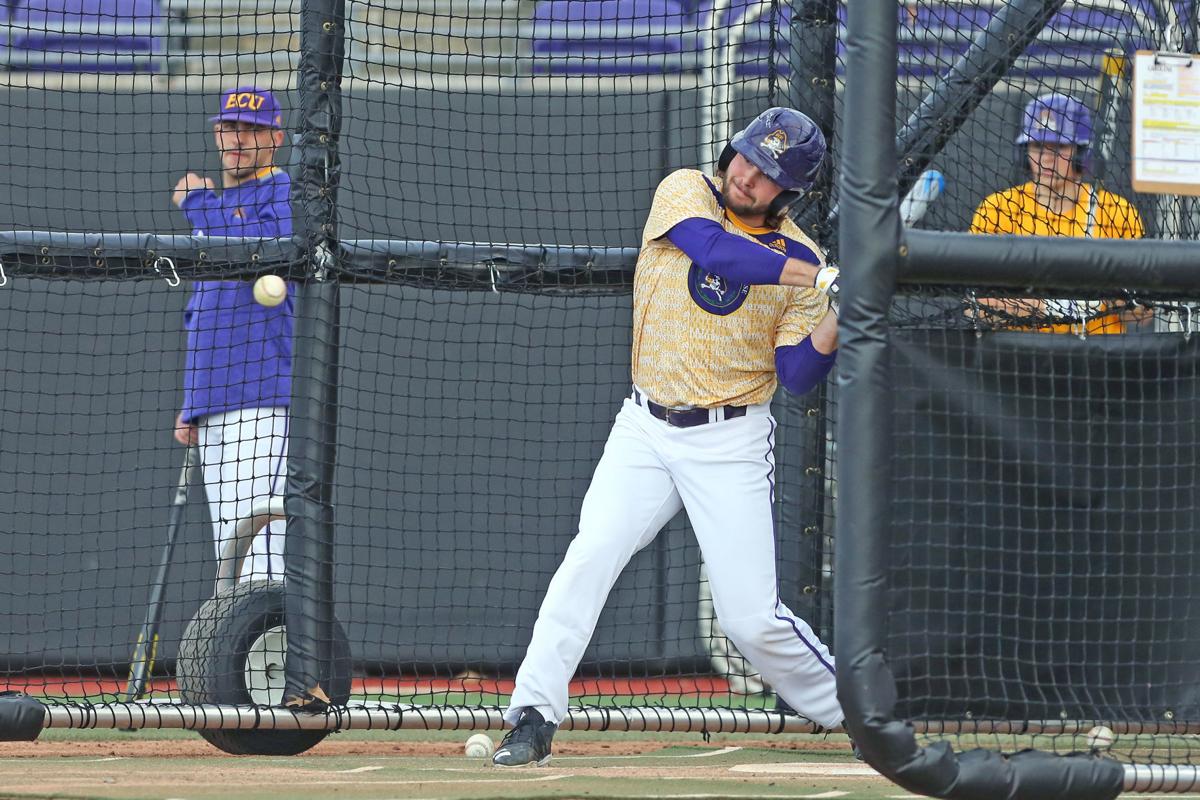 Louisville’s Reid Detmers pitches against Mississippi State during the ninth inning of a College World Series baseball game in Omaha, Neb., last season. The Louisville ace with a devastating curveball made a huge jump from his freshman season. He was 2019 ACC pitcher of the year.

Louisville’s Reid Detmers pitches against Mississippi State during the ninth inning of a College World Series baseball game in Omaha, Neb., last season. The Louisville ace with a devastating curveball made a huge jump from his freshman season. He was 2019 ACC pitcher of the year.

Ten players to watch in college baseball this season:

Burleson could be the best two-way player in the country as a Pirate standout outfielder and pitcher. He also could play first base or, if needed, be a weekend starter on the mound like he will for opening day. Last season he batted .370 with nine homers and 61 RBIs and posted a 6-2 record and five saves with 68 strikeouts in 60-plus innings.

The Louisville ace with a devastating curveball made a huge jump from his freshman season. He was 2019 ACC pitcher of the year after going 13-4 with a 2.78 ERA and 167 strikeouts in 113 1/3 innings. He set the school record for strikeouts and tied the mark for wins.

Gonzales’ .432 batting average led the nation, and he had 16 home runs, 80 RBIs, 19 doubles and four triples. He hit 11 homers in his first 14 games last season and reached base in all 55 games. He ended the season on a 66-game on-base streak dating to 2018, the longest in the country. He showed what he can do with a wood bat in the Cape Cod League, batting .351 with seven homers.

Hancock is in line to be the first player taken in the the Major League Baseball draft in June. He pitched a team-high 90 1/3 innings despite a lat injury, went 8-3 and posted a 1.99 ERA that was lowest by a Georgia starter since 1977. He allowed zero or one run in nine of 14 starts and had 97 strikeouts against 18 walks.

Lacy is the best left-hander in the country and could overtake Jeff Granger, the No. 5 overall pick in 1993, as the Aggies’ highest drafted player. He moves to No. 1 in the rotation after going 8-4 with a 2.13 ERA and 130 strikeouts in 88 2/3 innings. His career 5.41 hits allowed per nine innings ranks fourth among active players.

Martin is widely considered the best pure hitter in the nation and is in contention to be the No. 1 overall draft pick. His SEC-leading .392 batting average was highest by a Vandy player since 2004. He went from one homer as a freshman to 10 last season, with two in the super regional-clinching win over Duke and two more in the College World Series opener against Louisville.

Mitchell led the nation and set a school record with 12 triples, with 10 of them coming over the last 22 games. He batted .420 over that final stretch and .349 for the season. He started 48 games in right field and 14 in center and committed no errors in 124 chances.

Neuse played a major role in the Red Raiders making the College World Series for the fourth time in six years. He led the Big 12 with six triples and also had 12 doubles and eight homers, including two grand slams. He started every game in the outfield and made only two errors.

The 6-4, 255-pound Rocker was the talk of the NCAA Tournament after throwing a 19-strikeout no-hitter against Duke in super regionals and going 2-0 with a 1.46 ERA to earn Most Outstanding Player at the College World Series. And he was just a freshman. Rocker enters this season after closing 2019 with a 10-1 record in his last 11 starts.

He’s only the third player in Pac-12 history to hit 20 homers in back-to-back seasons and is a projected top-three pick in the draft. With 48 homers in two seasons, he’s 25 away from cracking the NCAA top-10 list and nine from breaking Bob Horner’s school record. Torkelson went deep 23 times last season to become the first player since Oregon State’s Michael Conforto to lead the Pac-12 in homers in consecutive seasons.