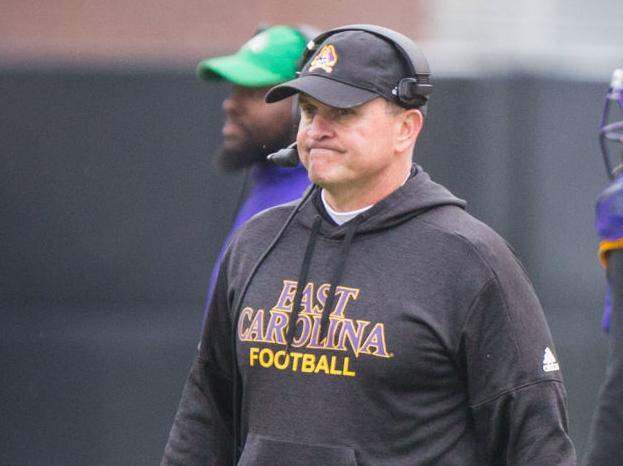 East Carolina’s head coach Mike Houston walks onto the field during a timeout at Dowdy-Ficklen Stadium on Saturday during a 49-24 season-ending loss to Tulsa.

Some college football postgame news conferences are rooted in reflection. Others are humbling.

For East Carolina coach Mike Houston on Saturday afternoon after his team’s surprising and bumbling 49-24 loss to Tulsa at Dowdy-Ficklen Stadium, Houston’s media session was a mix of reflection and recognition.

Even the first-year Pirate coach could see that breaking down ECU’s final 4-8 record is complex.

It starts with the major breakthrough that the Pirates did not finish 3-9 for a fourth straight year, but it also was Houston’s lowest season win total in his nine years as a head coach. He went 5-7 at The Citadel in 2014, then 9-4 the next year.

Close losses by the Pirates to Top 25 teams SMU and Cincinnati in November were part of the encouraging signs for the future. Sophomore quarterback Holton Ahlers passed for the fourth-most single-season yards in school history. ECU’s best receivers were freshmen, led by C.J. Johnson.

The Pirates are on track to sign a top-five recruiting class in the AAC in a few weeks.

But the most telling part of Houston’s 10-minute address with media members late Saturday afternoon was when he said: “Just because it worked for us some other place doesn’t mean that is what we need to do here. I do think we accomplished a lot and grew so much, but it’s obvious that we have to continue to still develop as players and with what we are doing as coaches.”

Figuring out exactly how ECU can improve in the American Athletic Conference is still a work in progress, which was reinforced with the loss to Tulsa combined with a 45-20 home defeat to South Florida on Oct. 26. It has been difficult for the Pirates since they first joined in the American in 2014, especially on defense, and many of those same challenges remain.

Too many opposing players, especially at skill positions on offense, find it too easy to have breakout performances at Dowdy-Ficklen Stadium.

Good news for Houston and his staff is they have a valuable cushion of time, more so than most other coaches in the current landscape of the sport.

ECU improved its facilities this fall, in the locker room, on the sideline and in attitude. The next major hurdle to stop its run of losing seasons, which is now at five straight years to tie 1984-88 as the longest such streak in school history, is for the team to win more league games.

An added layer to the urgency that Houston recognizes for this important offseason is that Connecticut just completed its final football season in the American.

The Pirates’ victories this year were against two FCS teams, UConn and Old Dominion. High-quality wins were clearly lacking, but the main goal this year was to be better than 3-9 regardless of all the details.

ECU accomplished that mission, even though the final game was underwhelming, and Houston’s history shows that the Pirates have the right head coach in Greenville.

The next step for East Carolina is to add to its AAC win total, especially with UConn no longer an available opponent.