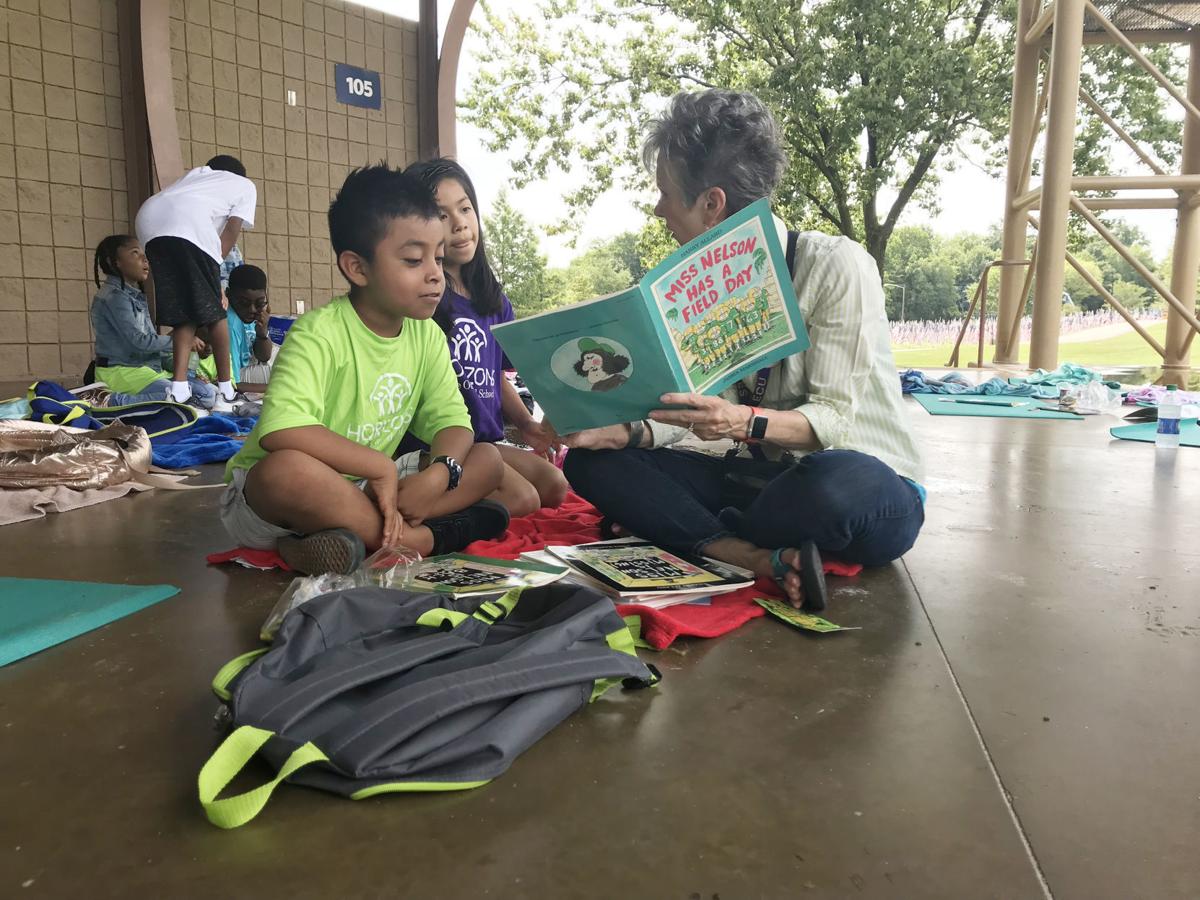 READ ENC Executive Director Terry Atkinson reads to children at the Town Common in July 2019 as part of Summer Learning Week. Many educators are concerned that disruptions in instruction due to the coronavirus pandemic will lead to additional learning loss. 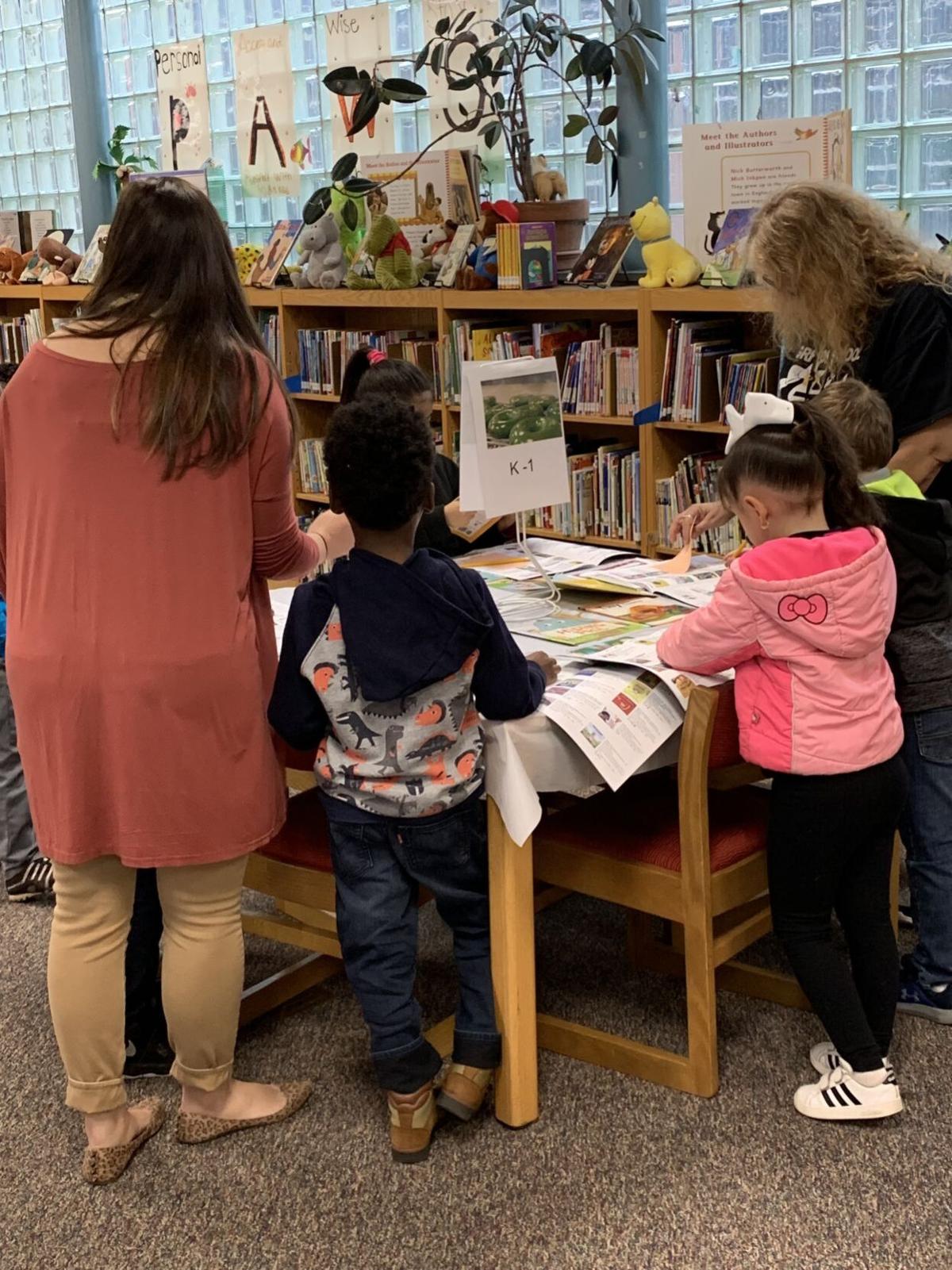 Parents and students gather in the media center at Grifton School to make their Kids Read Now summer reading selections in this pre-pandemic file photo. 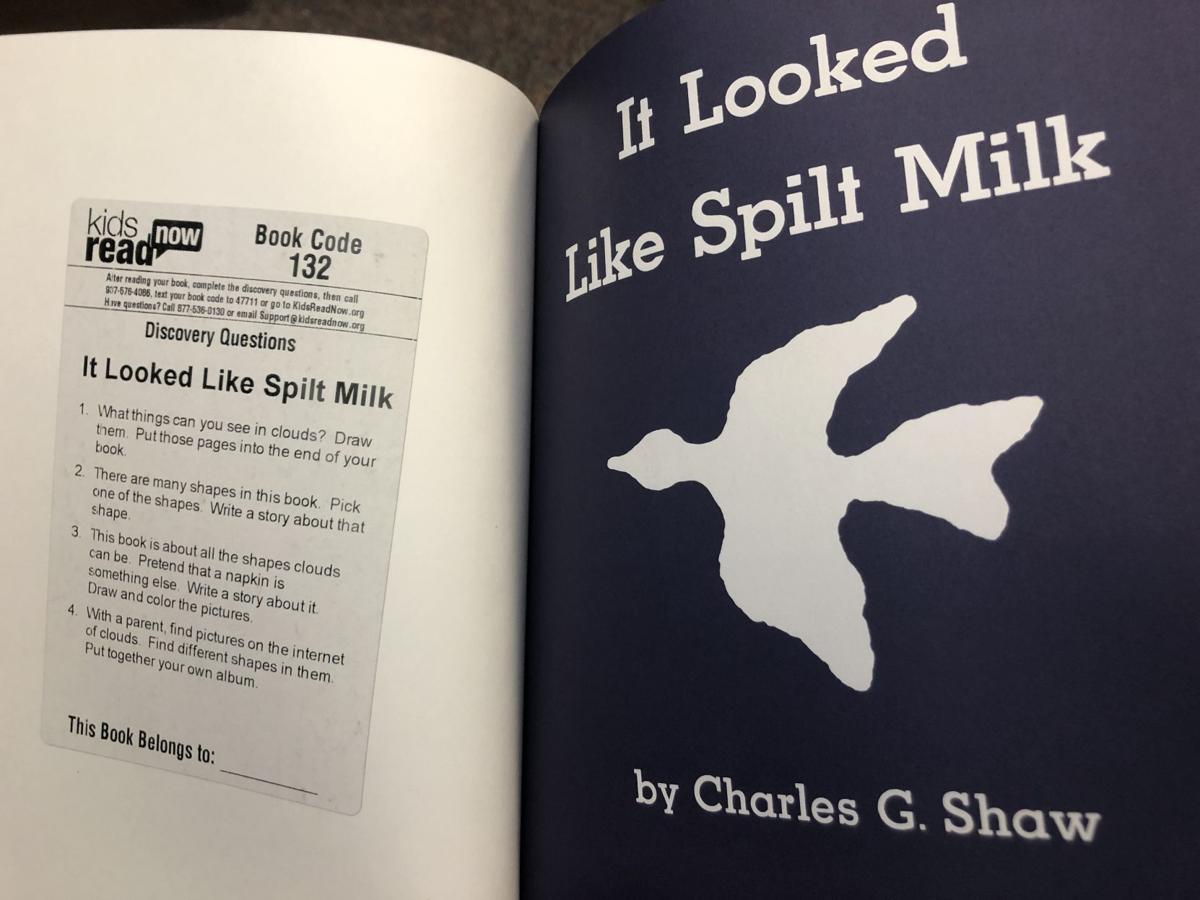 Kids Read Now book selections provide suggested discussion questions that families can use to initiate conversations about the books their children read. 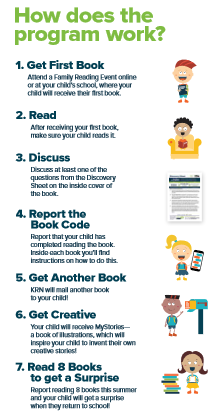 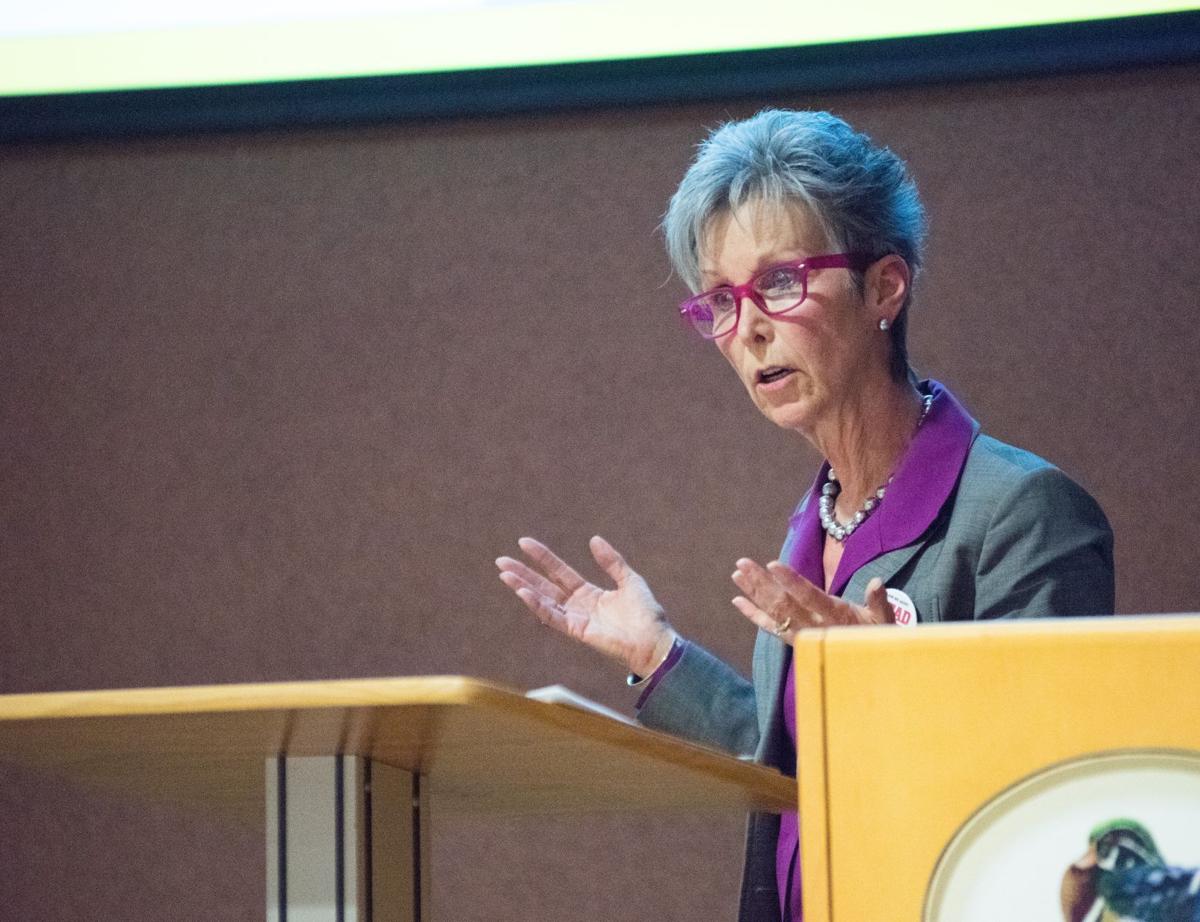 READ ENC Executive Director Terry Atkinson reads to children at the Town Common in July 2019 as part of Summer Learning Week. Many educators are concerned that disruptions in instruction due to the coronavirus pandemic will lead to additional learning loss.

Parents and students gather in the media center at Grifton School to make their Kids Read Now summer reading selections in this pre-pandemic file photo.

Kids Read Now book selections provide suggested discussion questions that families can use to initiate conversations about the books their children read.

The tendency for children to see a decline in their reading ability between the end of one academic year and the beginning of the next is commonly referred to as “summer slide.” But the summer of 2020 had the makings of an avalanche.

Schools that normally are closed from mid-June until late August were shut down beginning in March due to the coronavirus pandemic. Many summer camp programs moved online, if they were held at all. Library schedules and bookmobile routes were disrupted.

But Denise Owens’ literacy students had new books to read all summer long. Kindergartners through third-graders at Grifton School were among more than 1,300 Pitt County Schools students who were part of Kids Read Now, a nonprofit summer reading program that encourages reading by giving kids a chance to select and keep new books.

In partnership with the READ ENC Community Literacy Coalition, Pitt County Schools in 2019 became the first district in North Carolina to adopt the program. This year, READ ENC is hoping to expand Kids Read Now to include nearly 1,700 elementary students at 10 local schools.

READ ENC Executive Director Terry Atkinson said research indicates that students who do not read during the summer can experience two to three months of reading loss. But she is concerned that the slide may be even greater now because of instructional time missed due to the pandemic.

“It’s a big unknown at this point how much learning loss is taking place because of COVID,” Atkinson said, “which is another reason why we feel this summer reading program is so important.”

Kids Read Now, which began in Ohio in 2010, expanded to become a national program in 2016. Client Success Manager Emily Randall said the program, which mails books to families at no cost to them, is especially beneficial for students from low-income households.

“We’re finding districts across the country really have found a need for this type of program, so we really have seen an increase in districts expanding their enrollment,” Randall said.

“Pitt County is one of our more rural school districts,” she said. “Kids can’t necessarily just walk down the street to the library, so getting books directly in their mailboxes has been really beneficial for a lot of our families.”

Sheppard Memorial Library Director Greg Needham said that while libraries are an invaluable resource for lifelong learning, having books in the home is also critical.

“It’s important for kids to have books of their very own in addition to access to books in school and at the libraries,” he said. “They then love those books, read and reread them, cherish them.”

Needham, who also serves as chairman of READ ENC, said the Kids Read Now program can build on the success of Dolly Parton’s Imagination Library, a program that mails one book each month to children ages 5 and younger. That program is administered across the state with funding approved by the General Assembly in 2017.

“It’s a brilliant program,” Needham said. “We would immediately, tomorrow have every school in Pitt County set up with Kids Read Now if we could.”

As part of the program, Kids Read Now not only mails a book to participants each week, it also sends weekly text messages or emails to parents to keep track of students’ reading progress. Students who complete all the books earn a certificate and a prize, which are sent to their schools to be presented in the fall.

In 2020, Kids Read Now delivered 9,481 books to the homes of students in Falkland, Grifton, Northwest, South Greenville, Wahl-Coates, Bethel, G.R. Whitfield and the East Carolina University Community School. As a result, 17,089 emails, 10,925 voice mail messages and 2,369 text messages went back and forth between parents and representatives of the program.

“That’s what it’s all about, getting families engaged with the summer reading,” Atkinson said. “That sort of rises above that whole issue about whether they’re virtual or whether they’re face to face. It gives parents the power to realize that they’re their children’s first and most important literacy teachers.”

“It’s really been something they look forward to as well as the students,” she said. “They’re seeing their kids wanting to go get the book out of the mailbox and sit down and read it to their siblings. To me, that’s progress and that’s positive.”

Parents reported that students’ reading times increased and attitudes toward reading improved as they participated in the program.

“We have kids that take their books that they receive in the summer and bring them to school when we first come back to school, and they’re sharing their books with other students,” Tate said. “They’re so excited about having a home library, where they may not have had one before.”

The district is planning to add the Kids Read Now program at two additional schools, Stokes and Belvoir, this year, which would double the number of participating schools from 2019. The total required to fund the program, which costs about $50 per child, is nearly $85,000, with the school district expected to pay about half the cost.

Tate said it is not yet known whether the district would be able to use CARES (Coronavirus Aid, Relief, and Economic Security) Act funding designated for mitigating learning loss.

United Way Interim Executive Director Jim Lawless said fundraising for any nonprofit effort is a challenge right now because so many people have been affected by COVID-19. Within the next year or so, he said, READ ENC should have more data to support the effectiveness of the program.

Lawless hopes such evidence could help the program to expand throughout the county and possibly the state, with the same kind of support the Dolly Parton Imagination Library received. But for now, he sees generating local funding as essential.

“We’re seeing there’s a lot of generosity and people want to help,” he said. “Especially in the beginning of the pandemic, we saw a lot of donations around essentials, basic needs, food, shelter. But everybody’s been hearing about how the children have been impacted especially not being at school, not being tested, and we know this is going to be a longtime problem.”

For more information or to make a contribution, visit readenc.org.