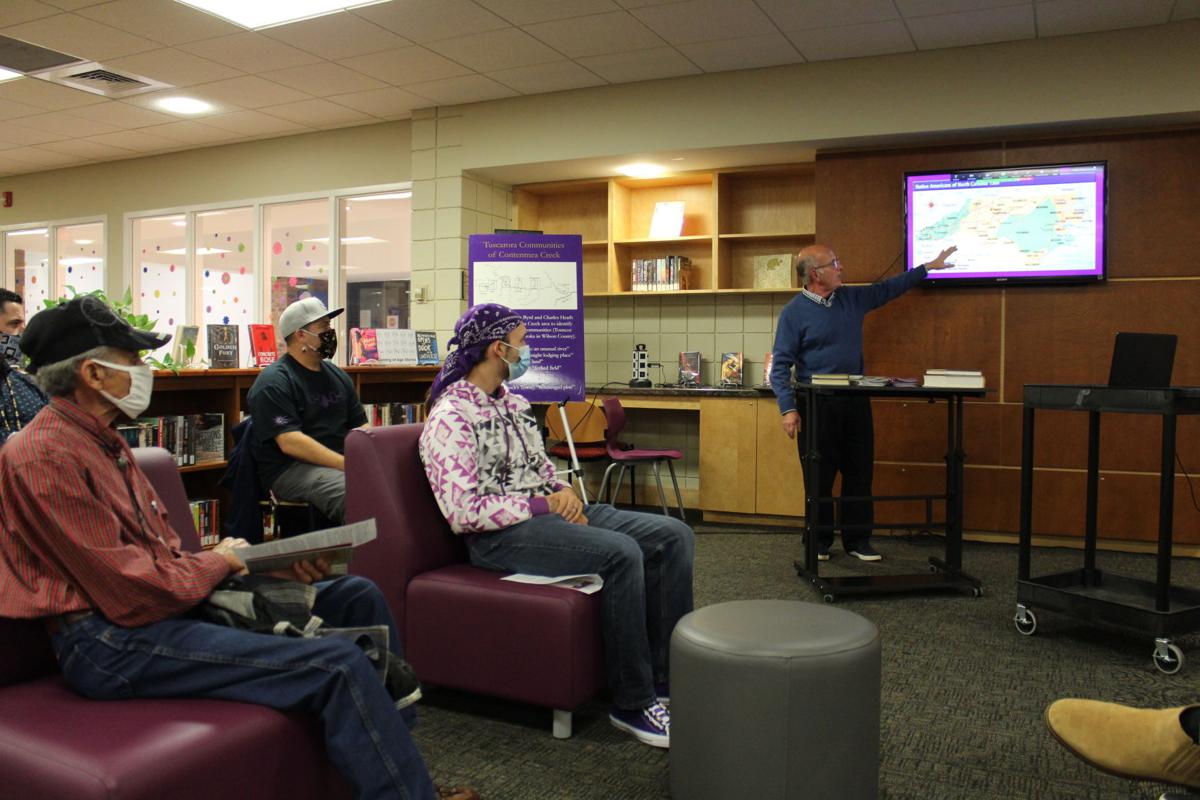 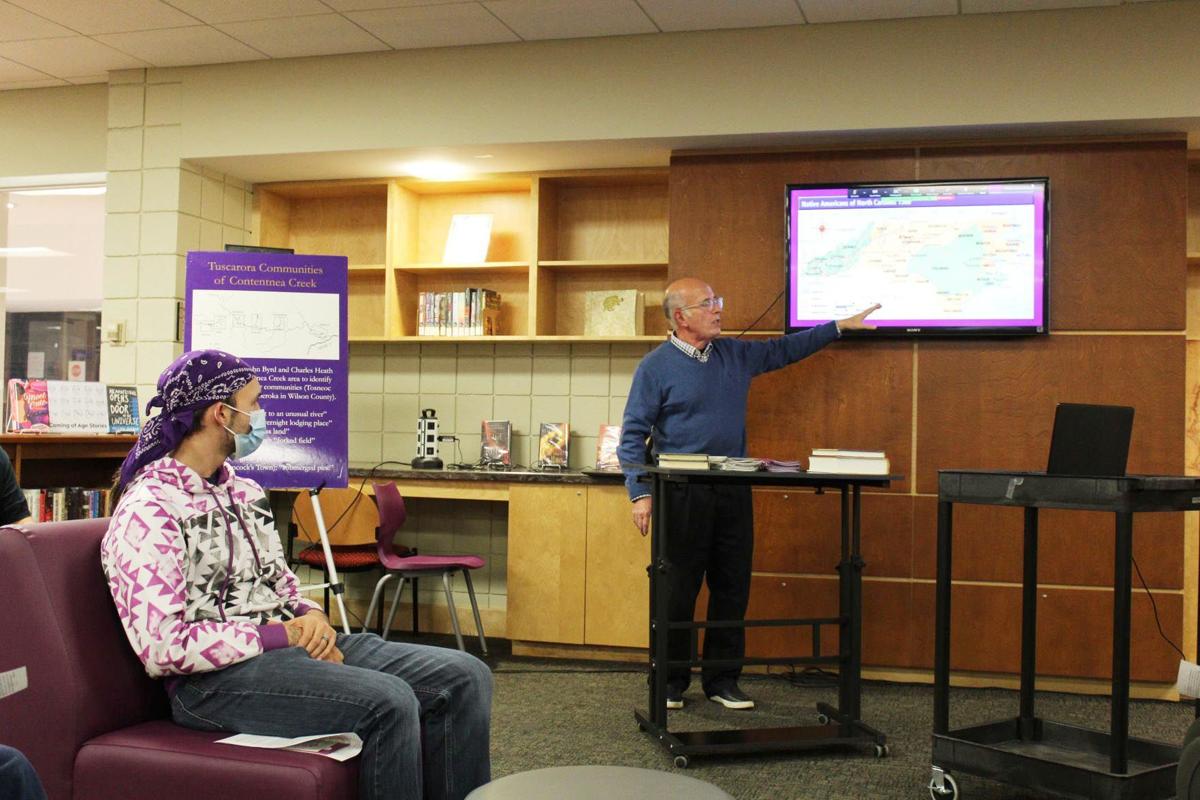 Donnie McDowell of the North Carolina Tuscarora listens as George Mewborn of the Greene County Museum presents history on the Tuscarora tribe. 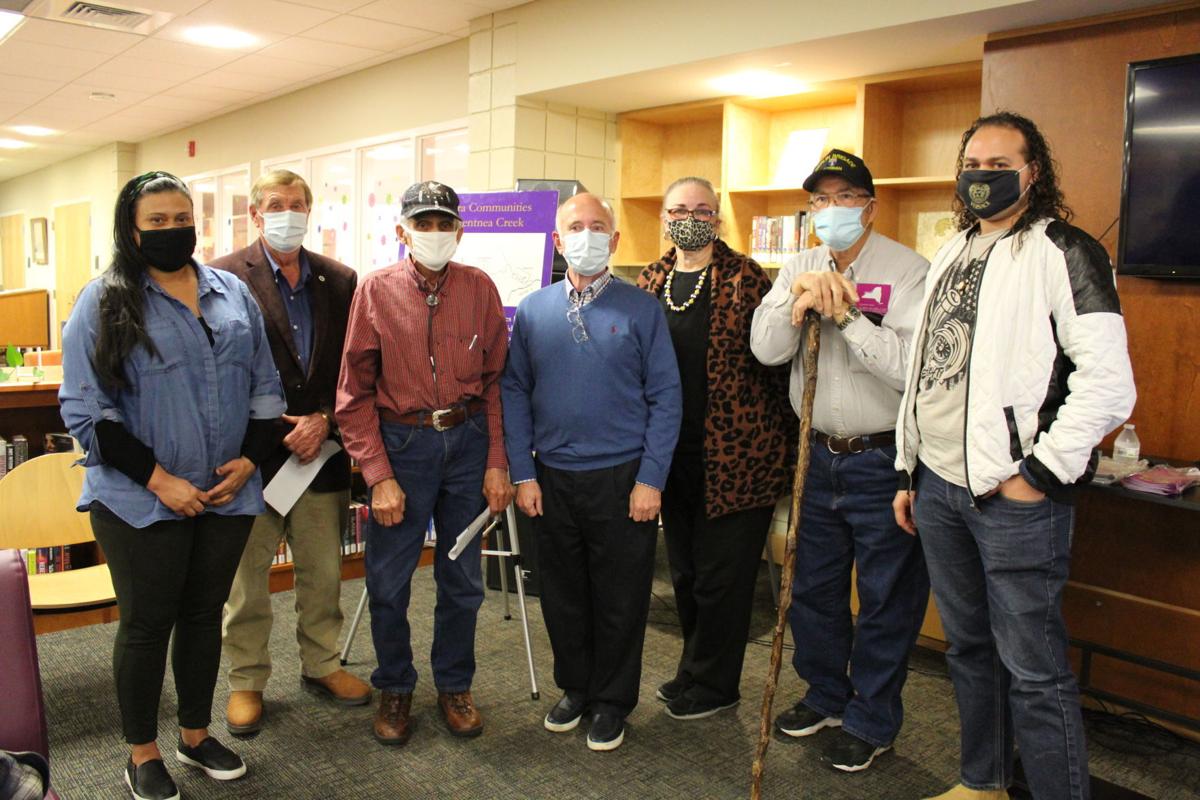 Donnie McDowell of the North Carolina Tuscarora listens as George Mewborn of the Greene County Museum presents history on the Tuscarora tribe.

SNOW HILL — The Tuscarora tribe once was a powerful economic and social force in the Tar-Pamlico region, a local historian said on Tuesday, discussing their daily lives, struggles and ultimate defeat at Fort Nooherooka during an educational presentation.

George Mewborn, a retired educator who works at the Greene Library Museum, and who played critical role in the building of the Nooherooka Monument on N.C. 58, discussed the Tuscarora’s history in Greene County.

Mewborn said that while other tribes lived in North Carolina and Greene County, the Tuscarora were the largest and most prominent.

“They came in with a force. They became quite a force, politically, socially and economically,” Mewborn said.

According to legends, he said, there were six families of Haudenosaunee — a confederation among Native American nations.

The sixth family, which would encompass Tuscaroans, was instructed to travel and find a new homeland out west.

They did so, but when they reached the Mississippi River, they used grapevines to cross. The grapevines broke, leaving members of the family separated and divided, Mewborn said.

Members who were left east of the Mississippi were guided by a spirit and told to travel southwest to find their homestead. They would know they found their homeland, the spirit said, when they reached pines submerged in the water.

When traveling through North Carolina, the members discovered bald cypress trees, Mewborn said, and decided they were home.

The Tuscarora name is derived from the Anglicized spelling of the native word Skarure, which translates to hemp gatherers, Mewborn said. Tribe members gathered Indian hemp or prairie dogbane and used the plants to make fibers. The fibers were used for sewing, making twine and rope, tied nets, fabric and bowstrings.

“They became a staple of their society,” Mewborn said.

In 1995-1997, Dr. John Byrd and Dr. Charles Heath conducted an archaeological survey in an effort to identify Tuscarora cluster communities. The communities consisted of multi-generational homes and gardens.

The Catechna community was the most prominent and considered the capital of the southern band of Tuscaroas, Mewborn said.

Though in separate communities, the Tuscarora tribe worked together and relied on each other for support, he said. They lived in longhouses, with members of the tribe sharing the same house.

“Life in the longhouse must have been intense. I don’t know if you’ve had relatives that come and stay,” Mewborn joked.

“They were known for their fields of strawberries. Strawberries were one of the things that signified something special,” Mewborn said.

The Tuscarora followed a more matriarchal system, he said. Men and women had separate roles, with each having power in the nation. It was believed that the creator established women as the stewards of the land. Clan mothers would appoint chiefs or leaders and had the power to strip the title and power from the chief if they felt he was corrupt.

Children took their mother’s name, and becoming married or divorced were simple tasks. Food was often exchanged to show marriage and to become divorced, a women would simply ask her husband to leave and remove his things from her longhouse.

“The esteem this group of natives had for women is remarkable,” Mewborn said.

The Tuscarora remained a strong force in eastern North Carolina until their defeat came at the Battle of Nooherooka. In March 1713, a military force under the command of Col. James Moore laid siege to a fort on a branch of Contentea Creek in Greene County. Moore defeated the Tuscarora warriors by mining an outer wall and setting fire to the fort and its structures.

“It was the single event that made a determination as how North Carolina was to go,” Mewborn said, about the encroachment of European settlers upon Tuscarora land.

After their defeat, some Tuscarora were forced into slavery, others went north and some formed groups that participated in guerrilla-type warfare against the settlers.

Mewborn used maps to demonstrate how the Tuscarora slowly disappeared from the region.

The monument at Nooherooka serves to remember the Tuscaroras and their story. Mewborn said he wants to see this area become designated as a National Battlefield.

Participants attended the seminar in-person and through Zoom. Many said they were impressed by the information presented.

“We’re so appreciative of someone like Mr. George here, who to give such a fantastic presentation for people who really want to know and for people who don’t know to learn from his expertise. This type of presentation would be welcome in the school systems,” said Tuscarora Principle Chief Cecil Hunt.

Tuscarora member Donnie McDowell added, “It was awesome. He had a lot of background. He used scholarly sources and he used very local people. Having his expertise and seeing more about internal history were really interesting.”

Participants also supported Mewborn’s quest to see the Nooherooka site turned into a national battlefield. Both Hunt and Vice Chief Elisha Locklear said they hoped to return the remains of deceased Tuscaroras — found during an archaeological dig — to the site.