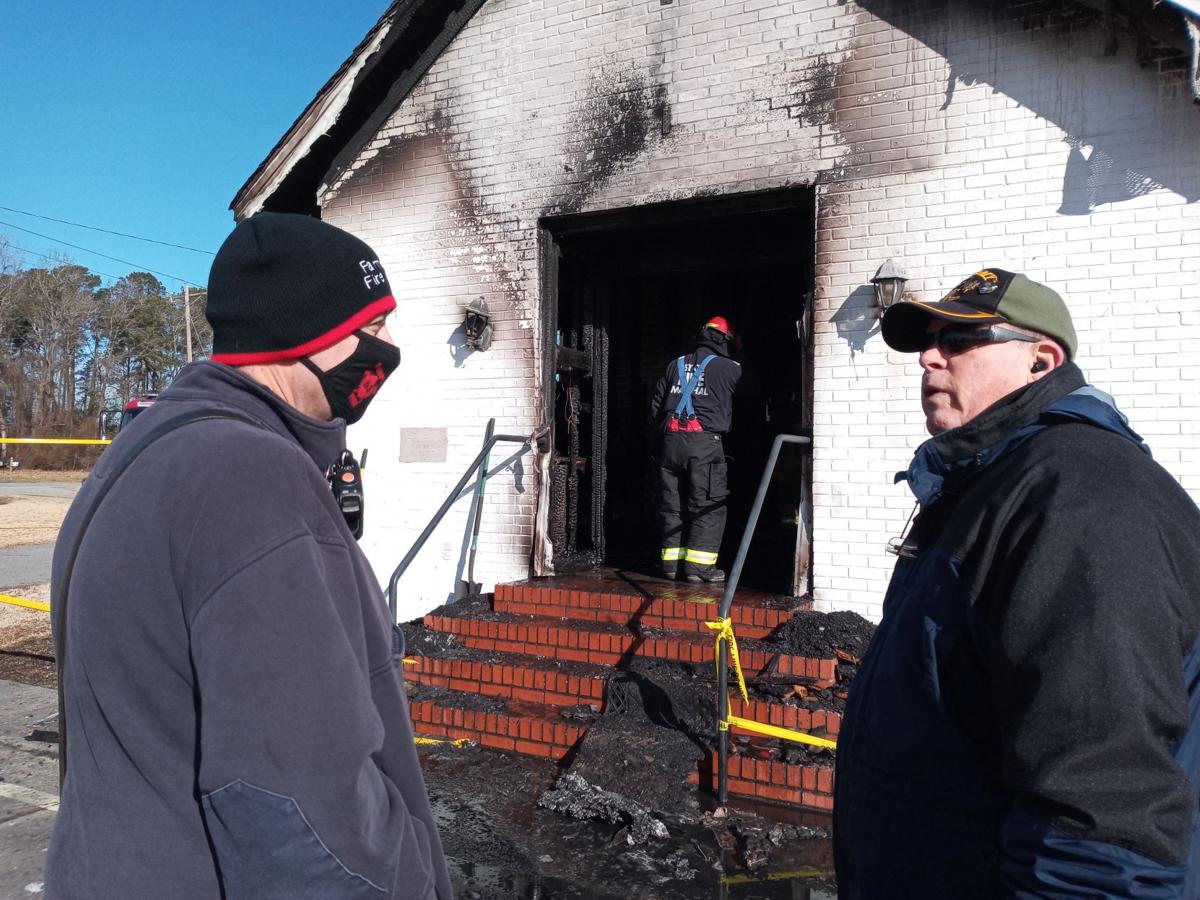 Farmville Fire Chief Tommy Brady Jr., left, speaks with Wesley United Methodist Pastor Dennis Levin on Feb. 3 after a fire caused damage to the church. Below, officials with the Office of the State Fire Marshal and Pitt County Emergency Management work to determine the cause of the fire. 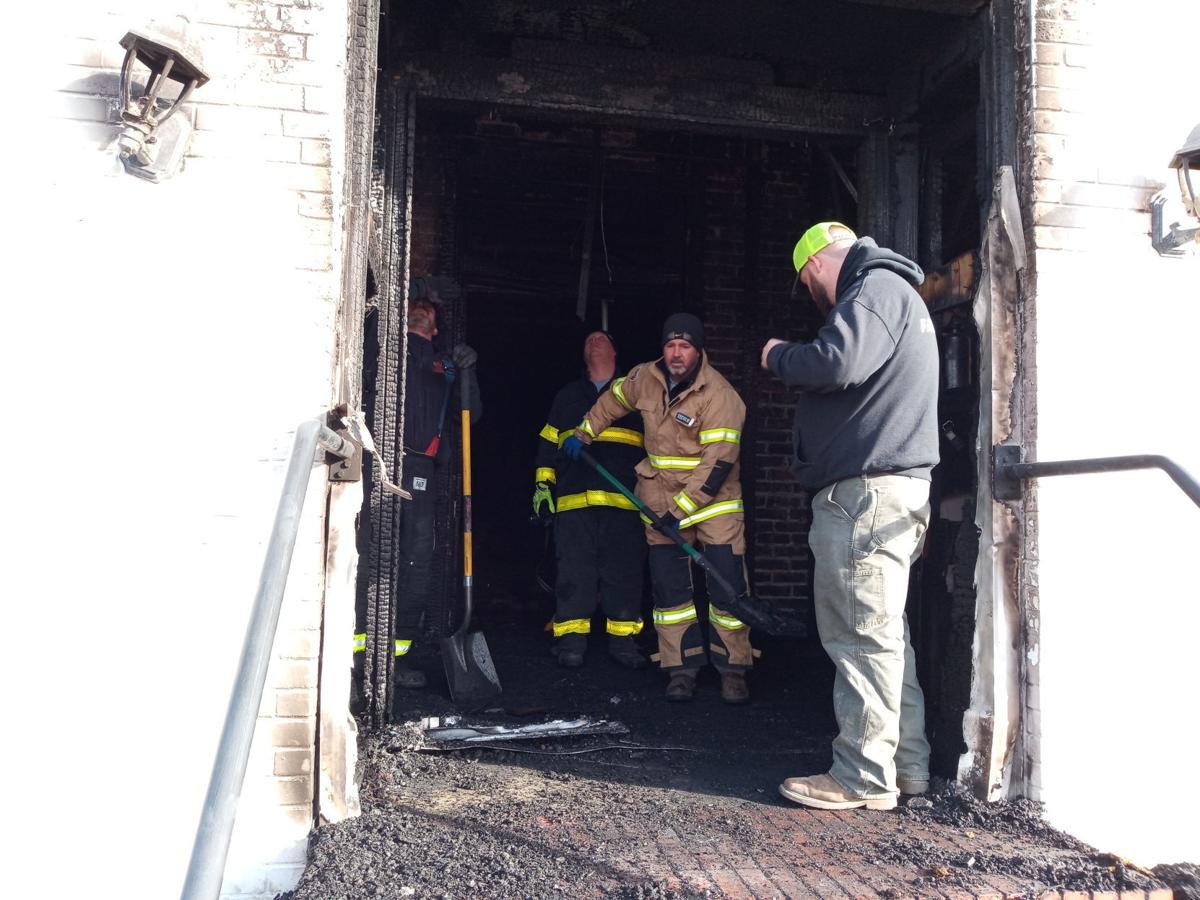 Officials with the Office of the State Fire Marshal and Pitt County Emergency Management work to determine the cause of a fire that damage Wesley United Methodist Church Tuesday.

Farmville Fire Chief Tommy Brady Jr., left, speaks with Wesley United Methodist Pastor Dennis Levin on Feb. 3 after a fire caused damage to the church. Below, officials with the Office of the State Fire Marshal and Pitt County Emergency Management work to determine the cause of the fire.

Officials with the Office of the State Fire Marshal and Pitt County Emergency Management work to determine the cause of a fire that damage Wesley United Methodist Church Tuesday.

FARMVILLE — A fire that caused heavy damage to Wesley United Methodist Church remained under investigation a week later, but members said they will rebuild.

The front vestibule and sanctuary sustained fire damage, and smoke damaged the entire building, Brady said. State and county investigators along with insurance agency officials had not determined a cause as of Tuesday, Brady said, though it was not related to a gas outage that affected many buildings in town.

“Upon first arrival, heavy flames were pushing out the front door,” Brady said. “Pretty much the whole door had a fireball coming out.”

More than 50 firefighters from Farmville, Bell Arthur, Fountain, Red Oak and Falkland worked to extinguish flames that roared as high as the church’s steeple.

“We knocked it back at the front door. We had a really quick knockdown,” Brady said.

Crews then moved to extinguish and check for fire extensions occurring throughout the building.

“That means there were no flare-ups at that time,” Brady said.

The structure, including the steeple, roof and windows, remained intact on Wednesday, as did the 80-person congregation.

“This is a very resilient congregation and we’re thankful the church did not burn — it was just the building,” Levin said.

The congregation formed in 1947 under the leadership of the Rev. Key Wesley Taylor and has been home to Garland Mozingo of Farmville for years.

“They built the church the year I was born,” Mozingo said, adding his father and grandfather were founding members of the church, and his grandmother and great aunt used to own the land where it’s located.

“I stood across the street and watched it burning. It was a sad time. She was solid. She didn’t want to let go,” he said of the building.

Sandra Bonner of Farmville has sat in the church’s pews for 65 years. Watching the building in flames was “devastating,” she said.

“This is my home church. I grew up here,” Bonner said, adding her grandfather also was a founding member.

When member David Tugwell of Fountain heard the news, he arrived on the scene to help firefighters with information about the building. A retired firefighter himself, Tugwell said he was heartbroken.

“We’re going to build it bigger and better,” Tugwell said. “Satan can’t keep us down.”

Levin and the congregation are thankful for the firefighters who put their lives on the line for the church.

“We had a tremendous amount of first responders to deal with this. We are appreciative of what they have done,” Levin said.

“When you need them, they are there. We so appreciate everyone for putting their lives at risk for our church.”

The church has received an outpouring of support from Farmville residents, other churches and the Methodist Conference.

“Churches in this area don’t work against each other. They work together. We consider it a shared ministry,” Levin said.

Services will continue to be conducted electronically on Sundays. The church will also continue its Bible studies in the fellowship hall.

The State Fire Marshal, Pitt County Emergency Management and the Farmville Fire Department are investigating the cause.

This fire was the second of the night the Farmville Fire Department. A minor oven fire occurred at Natural Blend at 9000 W. Marlboro Road.

“While out here, we had to go back there,” Brady said. The department had assistance from Walstonburg and Winterville Station #15.

“It was just some dust. There was nothing to it.”