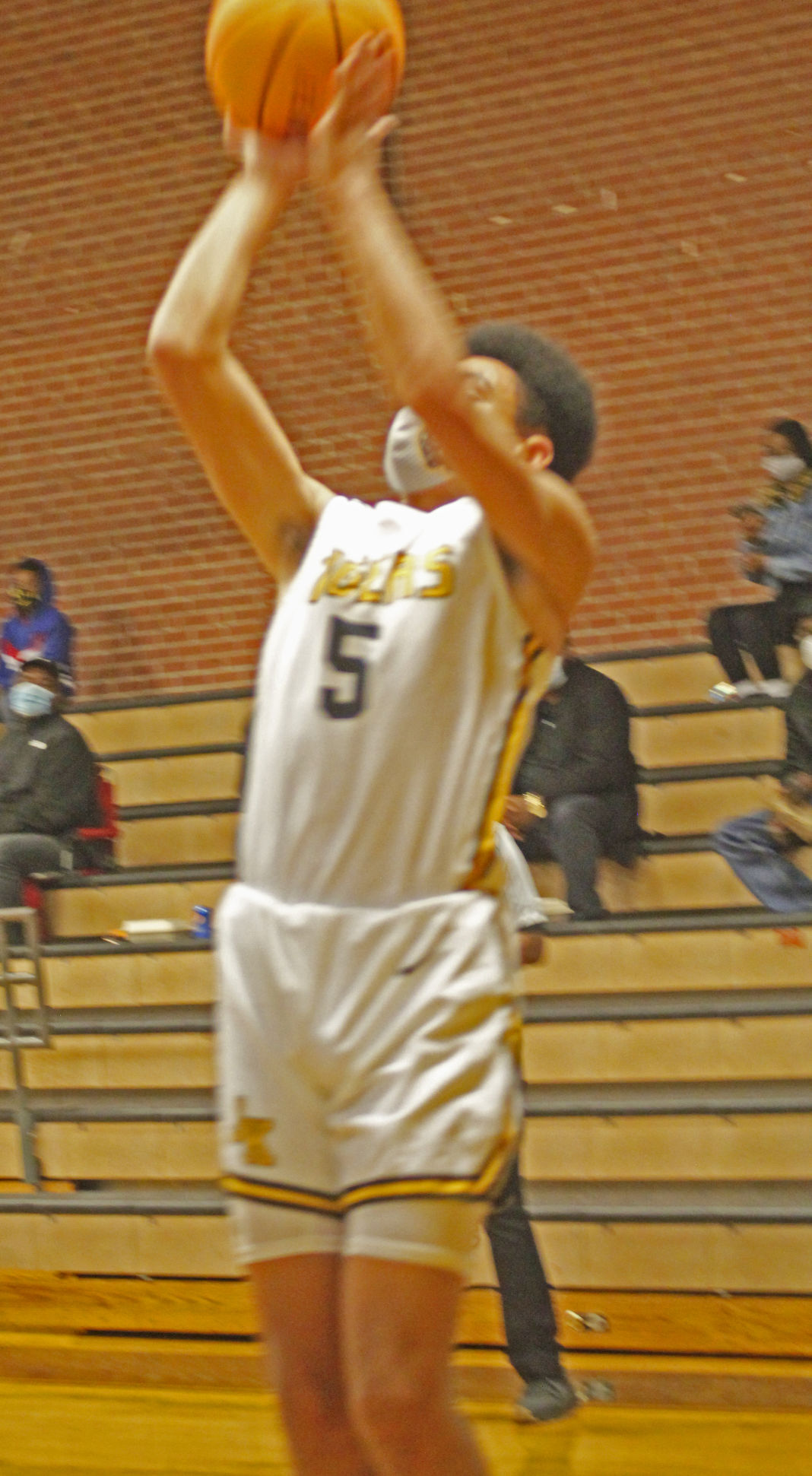 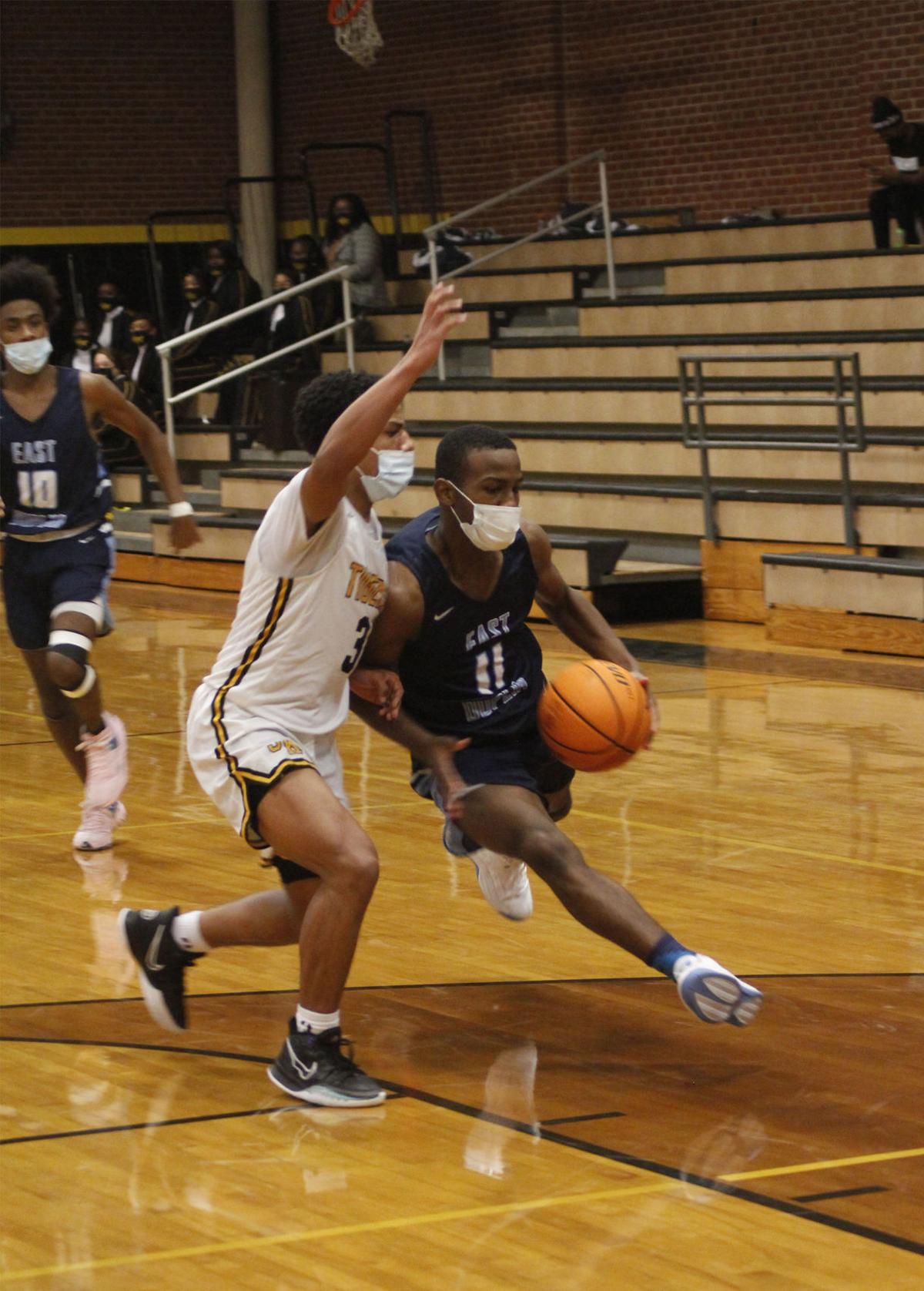 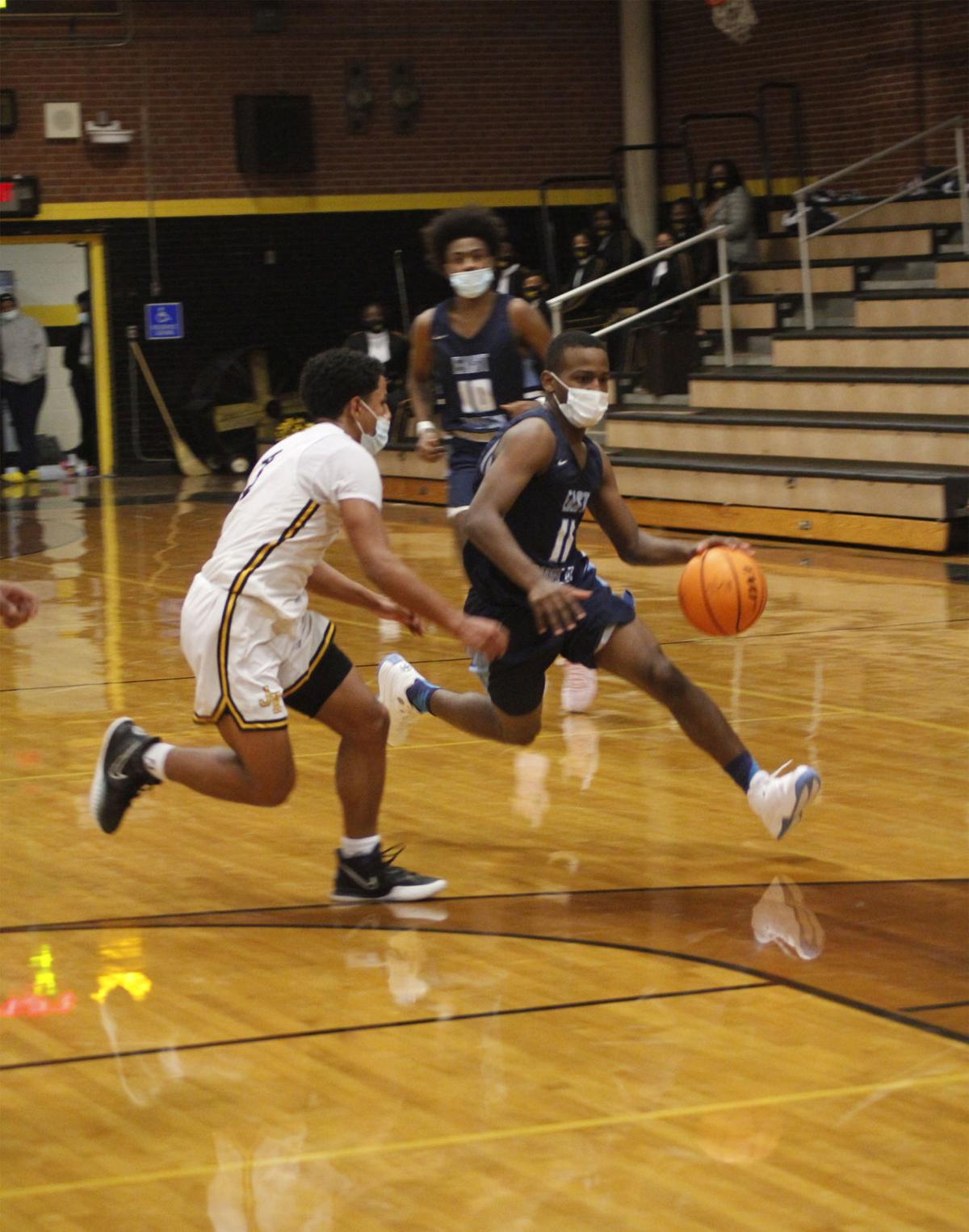 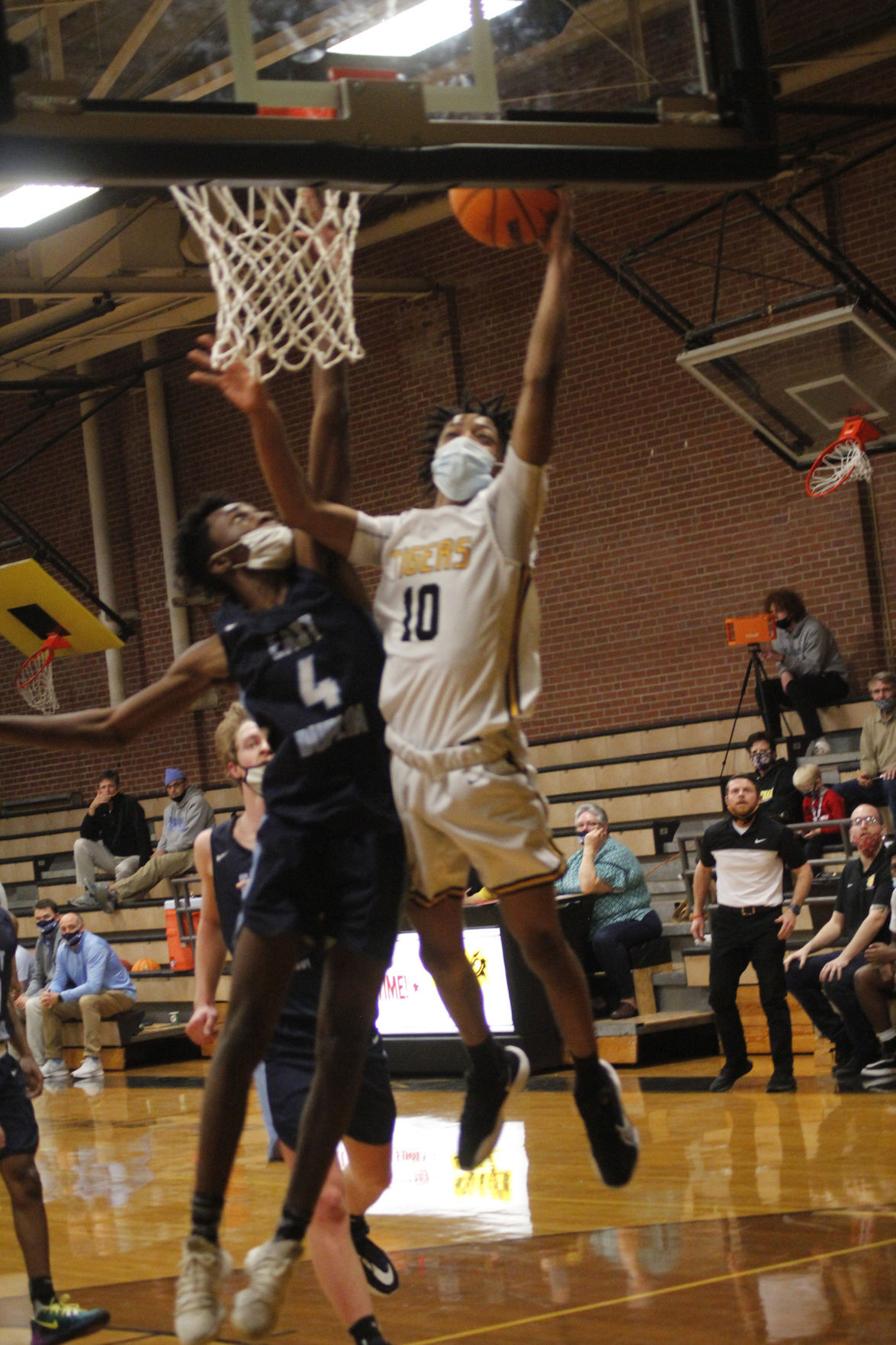 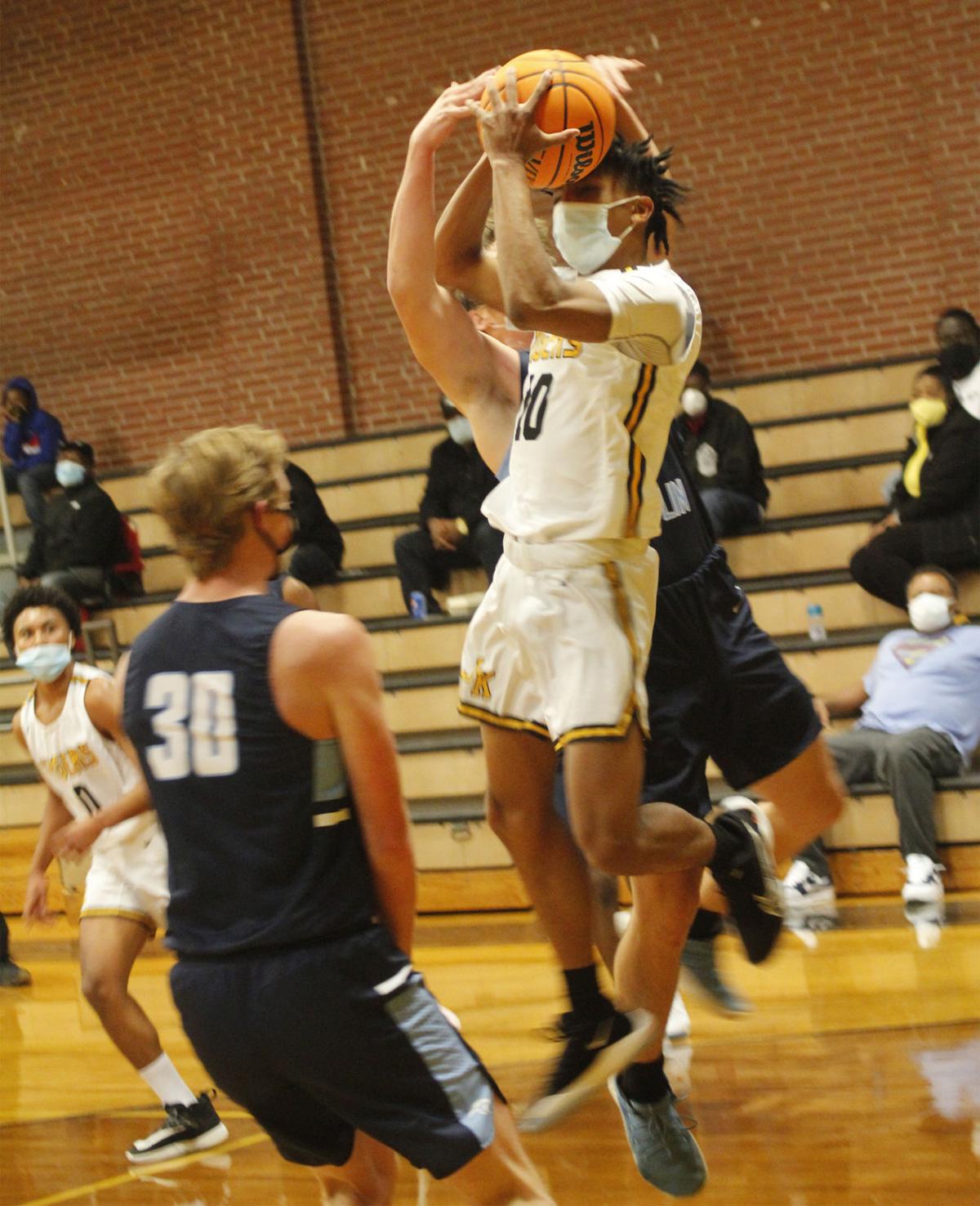 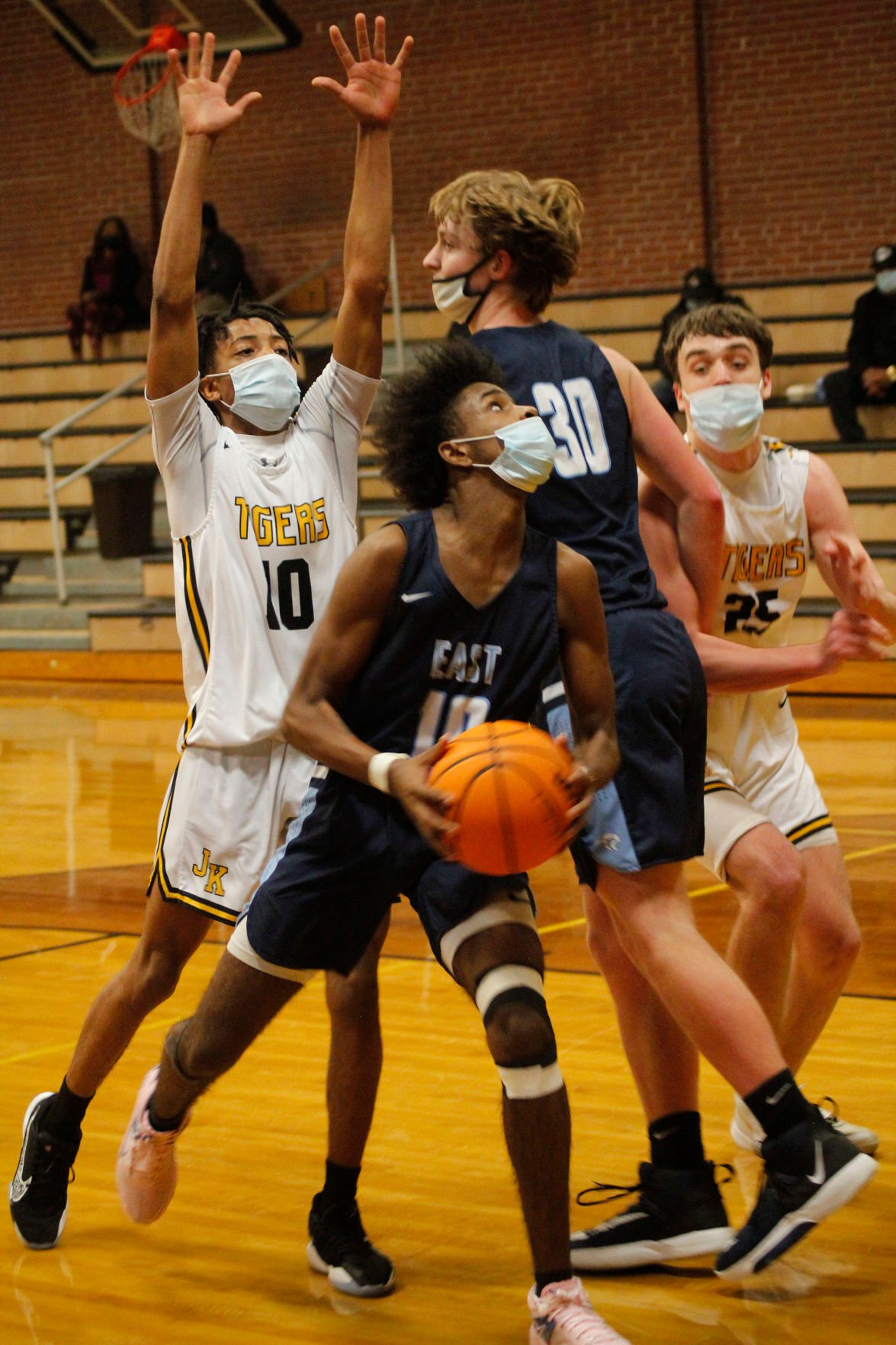 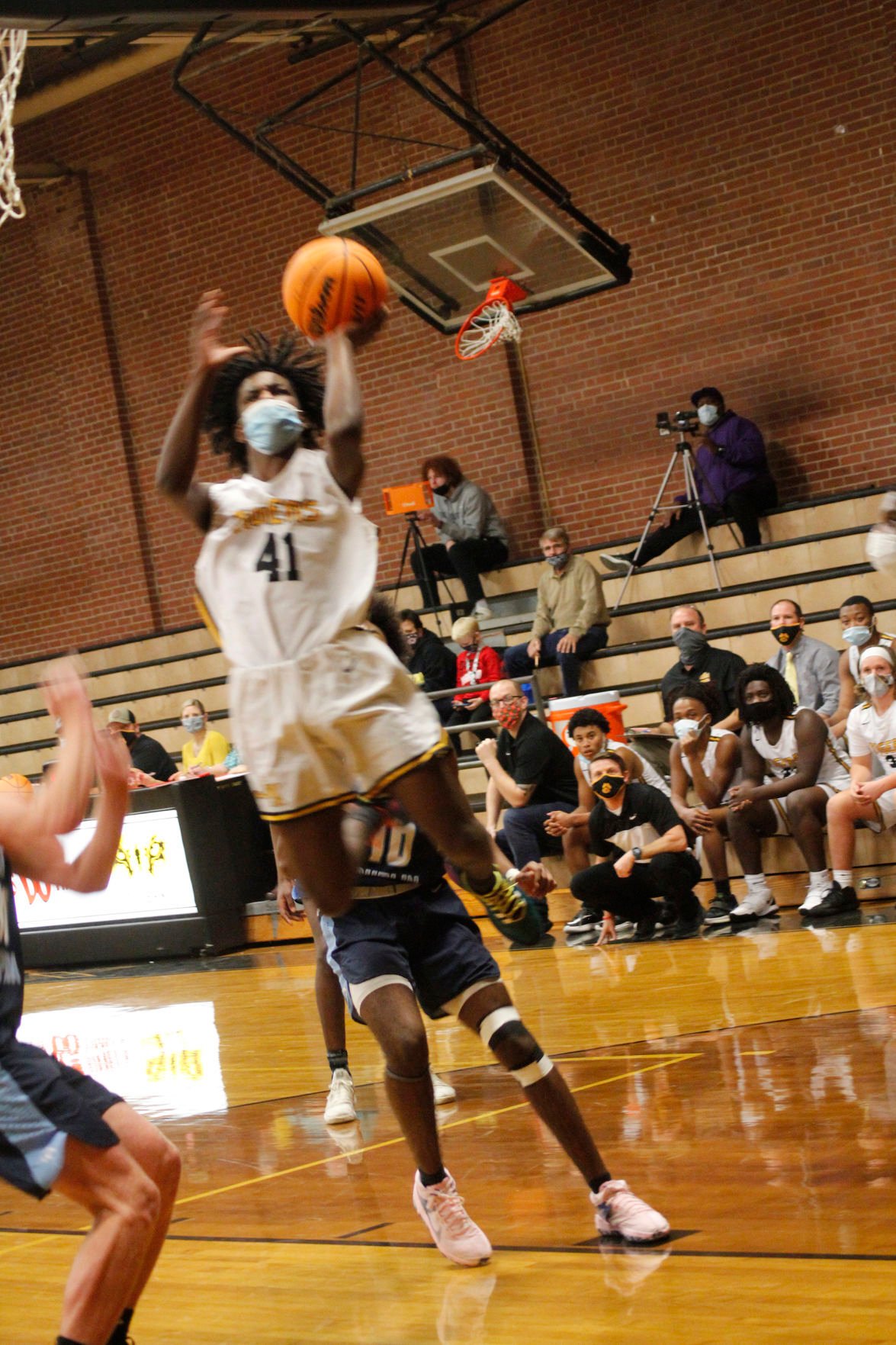 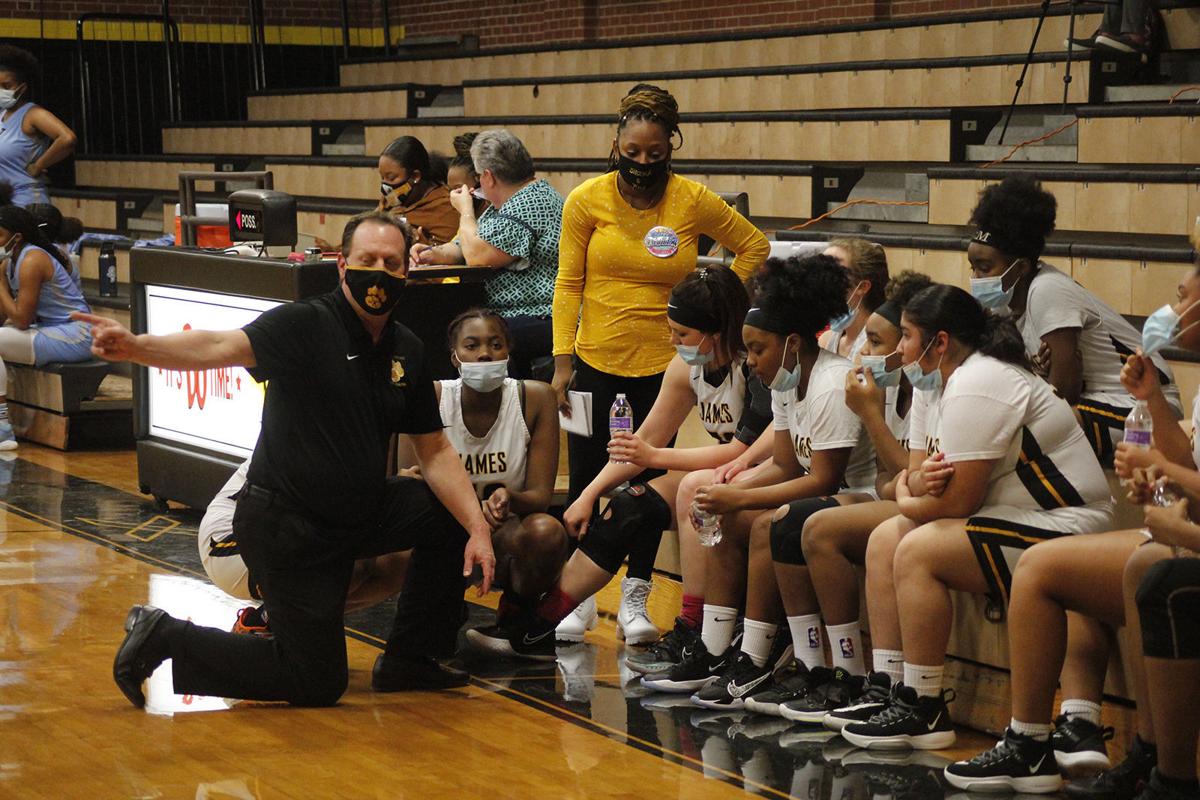 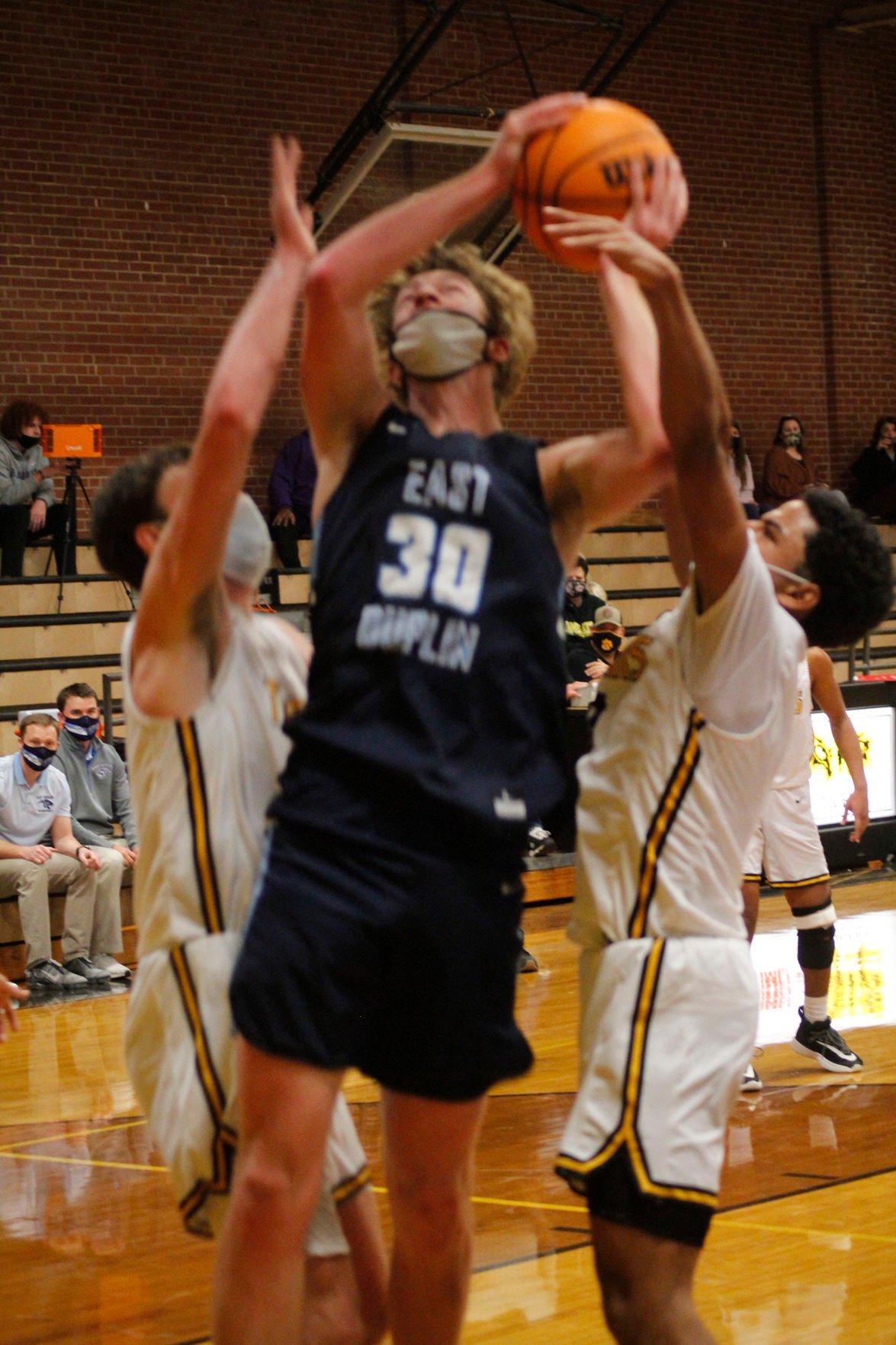 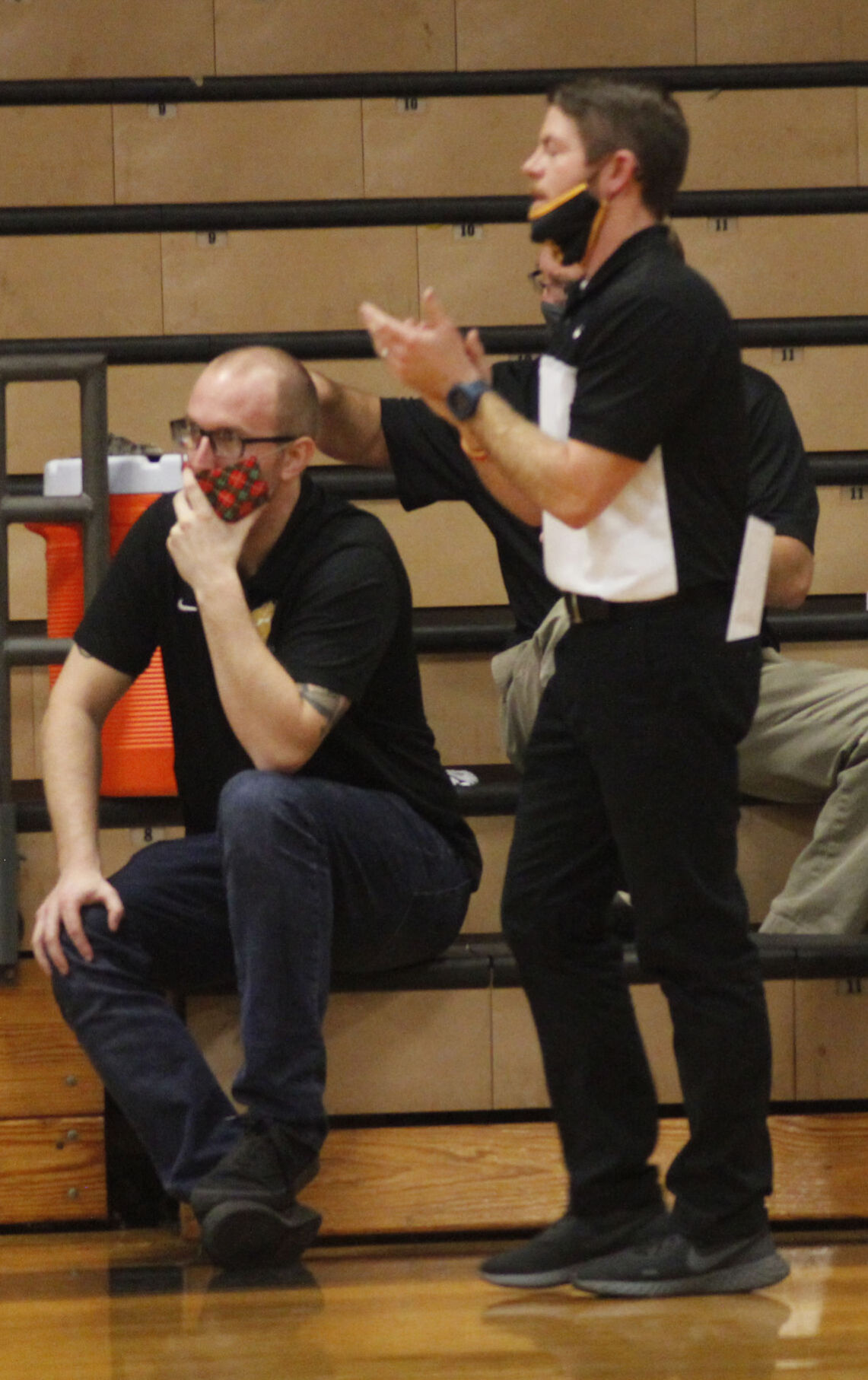 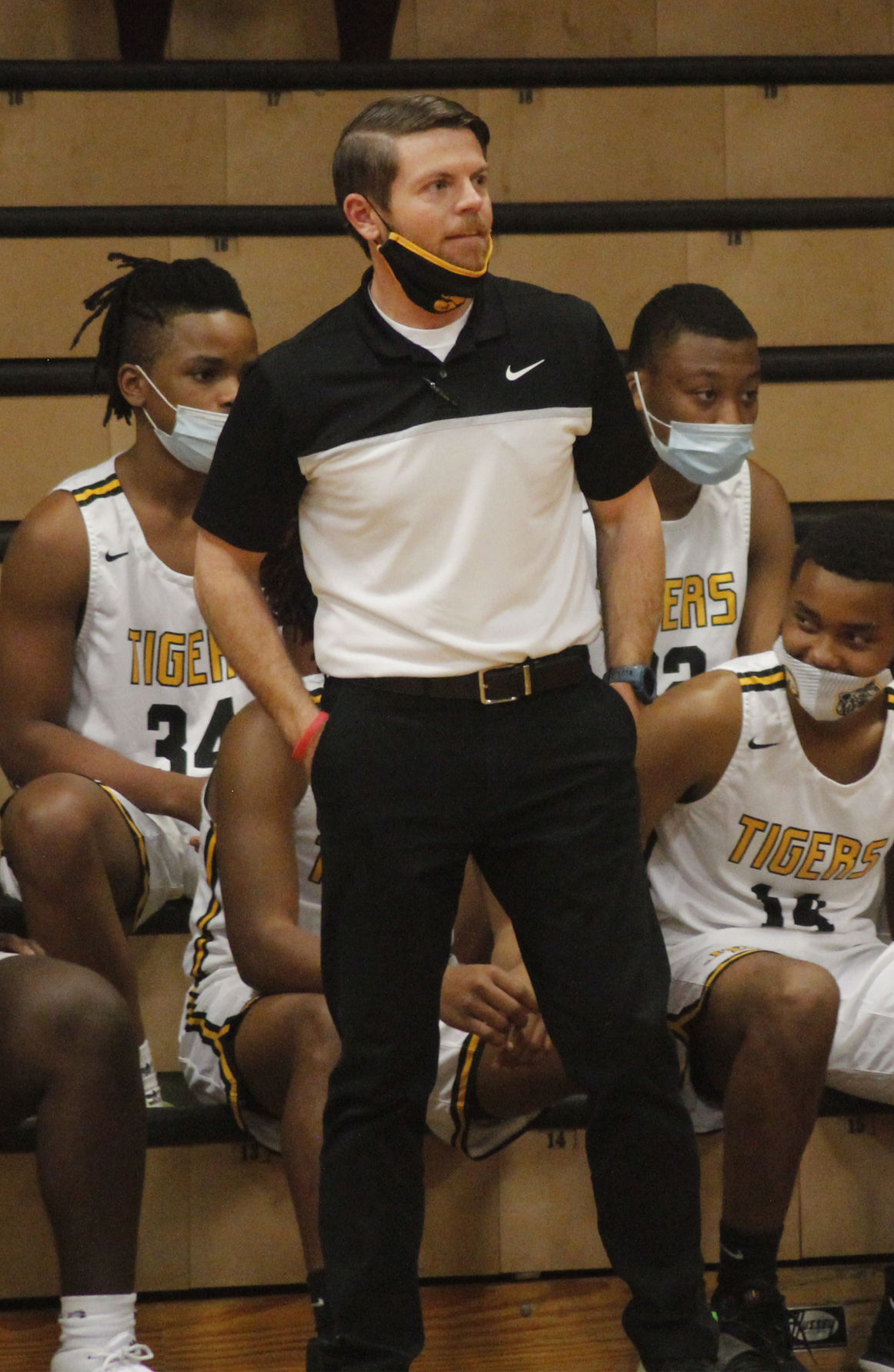 ARSAW — Last winter, James Kenan’s biggest victory during a 10-wins season came over East Duplin in Harmon Gymnasium near the end of January.

The 55-50 overtime win was highlighted by a superb performance from senior Prince Lee.

The Panthers recovered to capture 15 wins and land in second place in the East Central 2A Conference.

The point guard’s layup and potential winning free throw were waived off by a traveling call with seven seconds left to preserve the first home win for new Tiger coach Taylor Jones.

It was deja vu for second-year Panther coach Blake Lanier.

“We’re about to tie it, but a blown call—the same in-and-out dribble they see every time down the floor by (the Tigers)—and now its called double-dribble,” said a visibly distraught ED Coach Blake Lanier.

Jones, a North Duplin grad who coached for 12 seasons at Spring Creek, was delighted with the win between two well-matched clubs.

That JK steps up to the line with ED is the biggest story line of this renewed rivalry.

“It’s a really great win for us,” Jones said. “That team has everything you need — size, length, speed, depth. They’re gonna win a lot of games this year.”

He also praised the JK step-up.

“That was a high-level game for two good teams. I feel like we played well enough to win. So did East Duplin.”

Indeed, there was talent on display as each team had several players step up.

JK held on at the end by a hair and no more in a game that was exciting from its opening tip to its wild ending.

“Kavell played a wonderful game and is a gamer,” Jones said. “EJ (Smith) has been really good, too.

“And Pender, he’s like our Swiss Army knife because he does so many different things.”

But the Tigers missed key free throws that could have led to their downfall.

McClarin’s driving hoop, an inside score, then a steal and two free throws by Jalen Hall, who led Panther scorers with 18 points, got it to within 68-63.

A 3-pointer by McClarin with 14.5 seconds remaining and two missed charity tosses by Smith set up the closing act.

Donaldson canned one of two free throws following the violation on McClarin.

McClarin netted 14 after coming off the bench.

Other Panthers came through as well.

Jaden Facen and Davan Brown each chipped in nine, and sophomore Daunte Hall played much better than his three points would suggest.

Tiger big man Mason Brown matched up against ED’s Brown, a first-team all-county player from a season ago, and played admirably. JK’s Brown netted six markers and had eight boards.

“He made plays late that he wasn’t making in the first, second quarters” Jones said.

“It’s hard to step in as a young player against established post players.”

Jones, whose club punched Midway 55-30 a day previous, played older than its experience might suggest.

A conventional 3-point play by ED’s Brown, a trifecta by Davan Brown and the steady play of Hall helped the Panthers jump to a 15-6 lead.

JK went on a 9-0 tear via field goals from Facen and Coe, and a 3-pointer near the buzzer by Smith trimmed it to 17-13 entering the second quarter.

Kornegay banged in a trifecta to start the second period, and another rocket shot by Pender 35 seconds later gave JK the edge at 20-19.

A Donaldson steal and layup and drive to the iron, and Mason Brown’s rebound score forced Lanier to burn a timeout, as ED trailed 26-23.

Smith knocked down four free throws in the final 2:08 of the second quarter.

Hall pumped in three baskets and a free throw to tied the game at 44 with 3:19 left in the third stanza.

Smith and Hall traded baskets and the lead with JK before Donaldson sank a 3-pointer with four ticks left on the third-quarter clock.

Lanier was upset with the loss but not the Panthers’ effort, enthusiasm or general play.

“We played OK but couldn’t run our offense very well,” he said. “We need to be more patient and not force things. Turning the ball over hurt us, as did our rebounding.

“Defensively, we missed some assignments. They kicked the ball out for 3s and while I give them credit for that it, was a factor in the game and something we could have done better.”

JK (2-0) will fly into the center of ECC conflict in its next three encounters. They were to host Wallace-Rose Hill this past Tuesday and Goldsboro on Friday before traveling to Clinton next Tuesday.

The Panthers have not beaten the Cougars since they joined the ECC in 2018 (0-6).

ED (1-1) was to face WRH earlier this week, then was slated to square off against Clinton before the Dark Horses got shut down by Covid-19 protocol.

They did not play WRH last week and will not return to the court until the Panthers hook up on Jan. 19 against Clinton.

Neither the Dark Horse girls basketball team nor the boys junior varsity squad were forced to miss games.