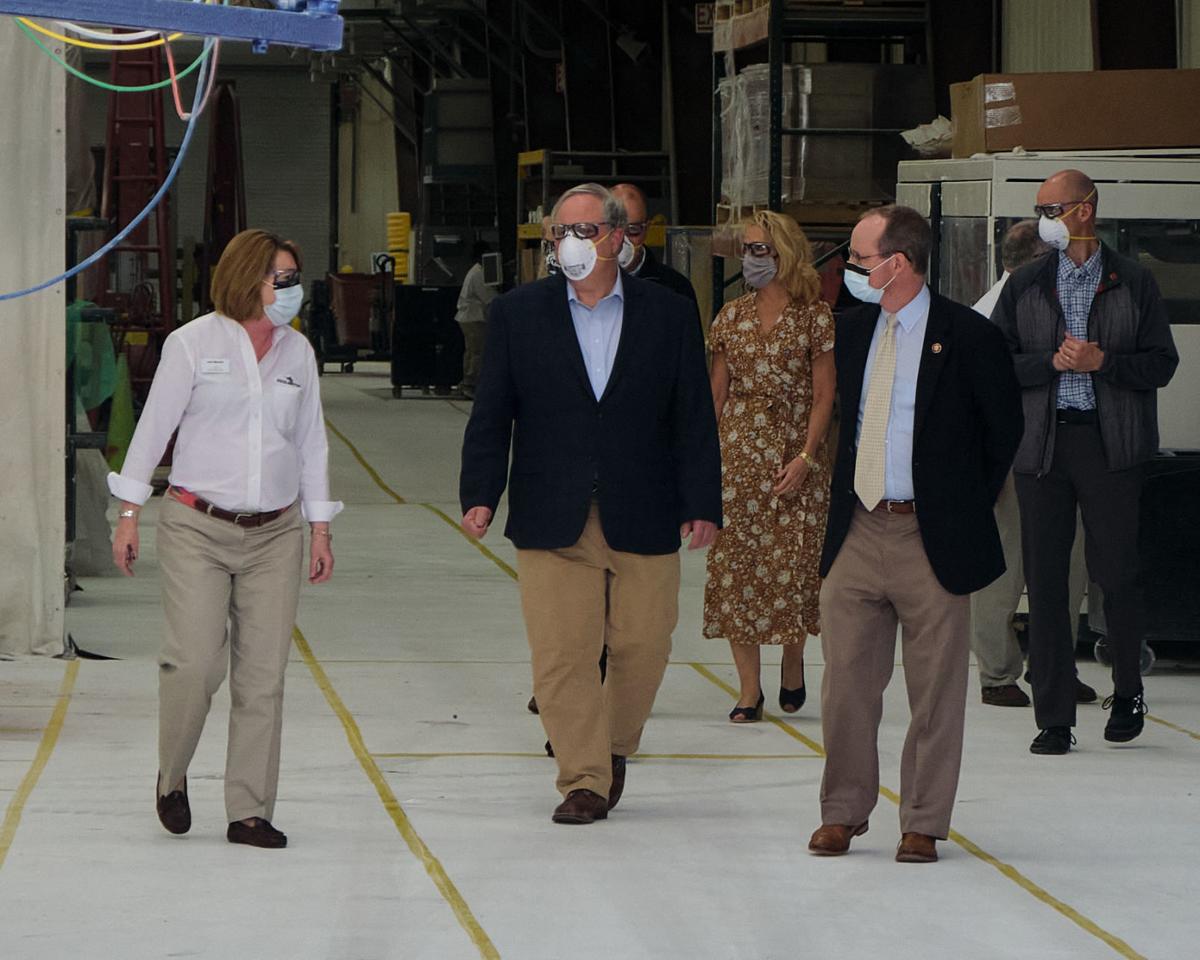 Joan Maxwell (left,) president of Regulator Marine in Edenton, accompanies U.S. Secretary of Interior David Bernhardt, center, and U.S. Rep. Greg Murphy, R-NC, on a tour of the boat manufacturer’s facility on May 6. 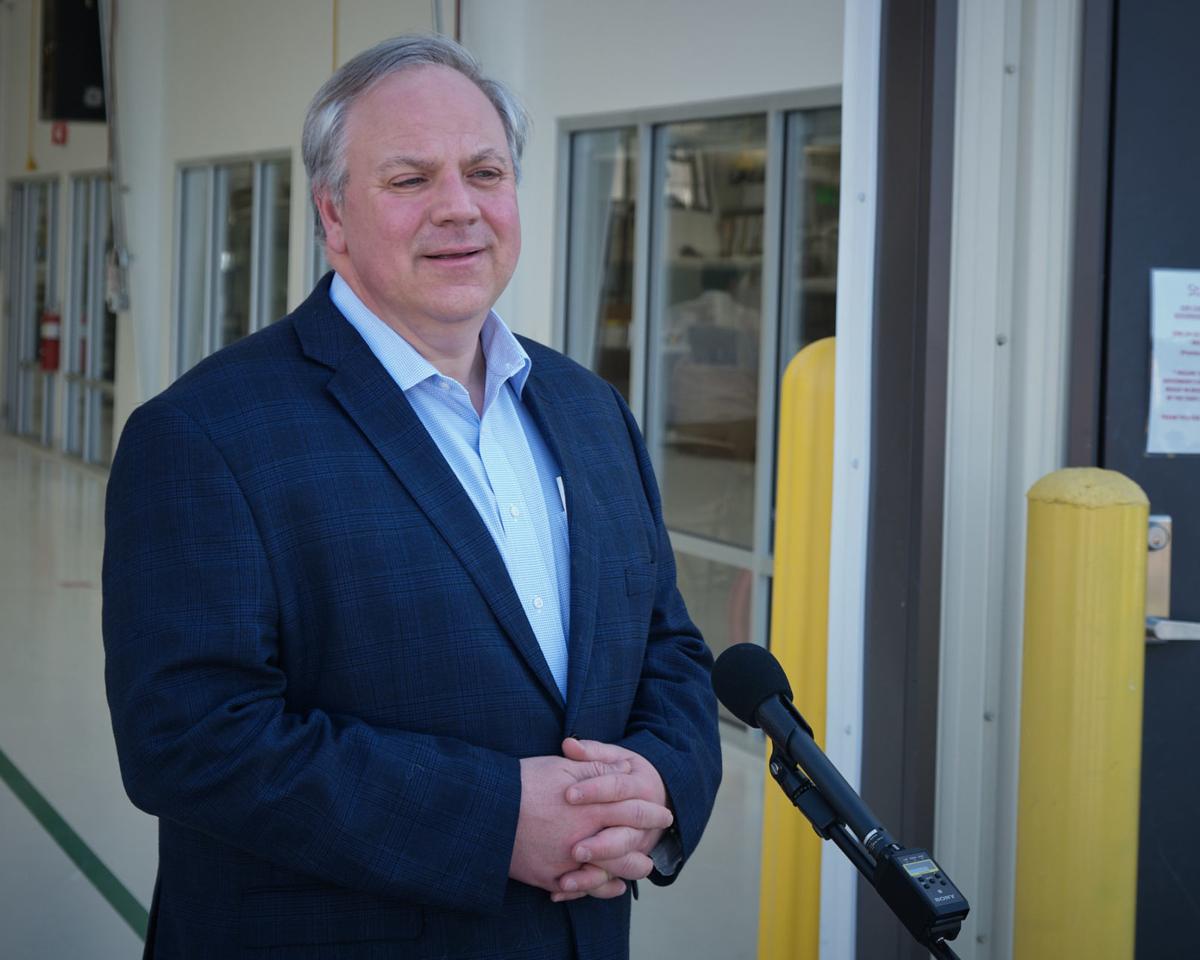 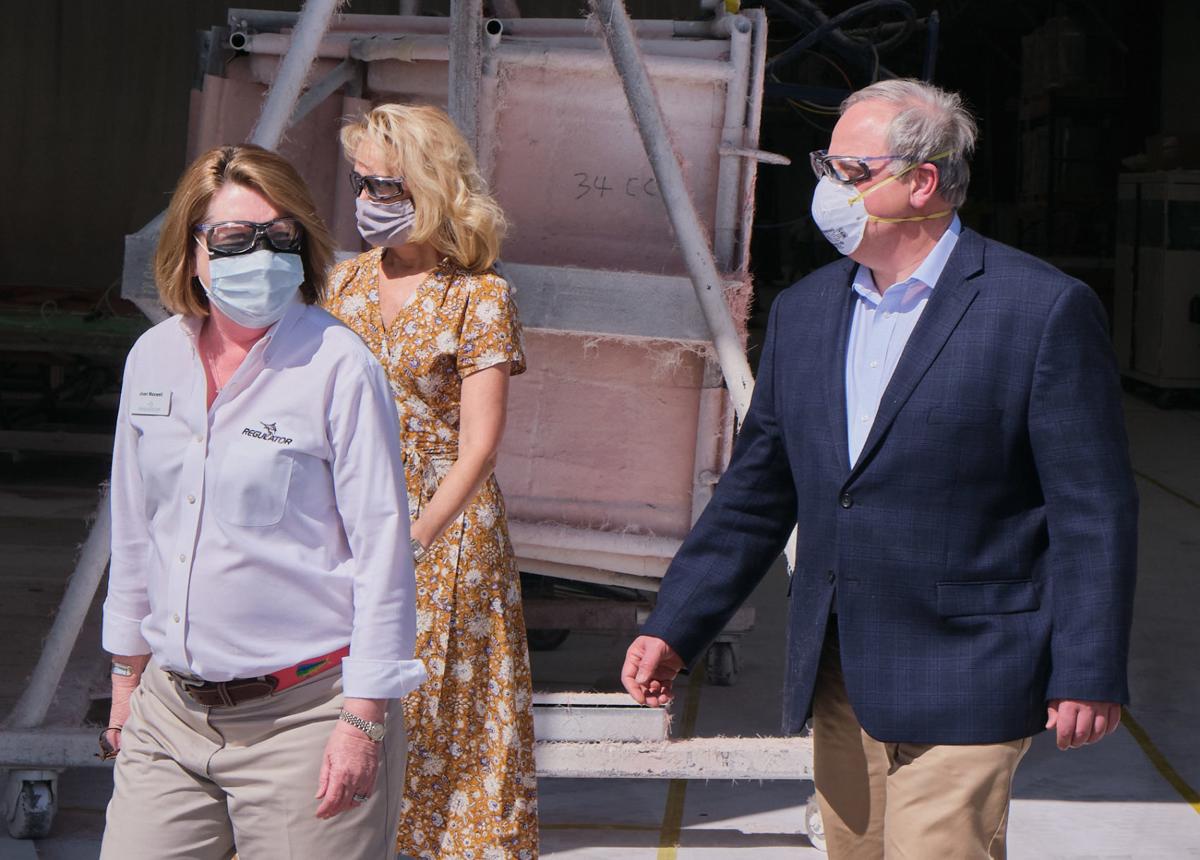 Joan Maxwell (left,) president of Regulator Marine in Edenton, accompanies U.S. Secretary of Interior David Bernhardt, center, and U.S. Rep. Greg Murphy, R-NC, on a tour of the boat manufacturer’s facility on May 6.

EDENTON — A member of President Trump’s Cabinet and the region’s congressman both praised Regulator Marine’s owners and employees this week for their efforts keeping the boat-builder operational during the COVID-19 pandemic.

The two were visiting at the invitation of Joan Maxwell, president of Regulator Marine, who along with her husband Owen hosted them.

Murphy and Bernhardt were visiting to see firsthand how Regulator Marine, which received assistance from the federal government’s $2 trillion coronavirus stimulus package, was able to remain open during the pandemic while also ensuring employee safety.

“We’re very thankful there’ve been no cases of COVID-19 in this facility,” said Joan Maxwell, after the tour.

Throughout their visit, Bernhardt and Murphy wore facemasks, as did the Maxwells. Workers, also donning facemasks, were busy moving about the boats, each in a different state of completion. Members of the media also wore facemasks.

Near the end of their tour, Bernhardt spoke briefly to one of the workers. He asked the man what his role at the plant was and then they laughed, and elbow bumped each other — the new handshake in the era of COVID-19.

At the end of the tour the Maxwells, Murphy and Bernhardt met with members of the media. The gathering was outside and away from the worker-filled maintenance bays.

Since the less-crowded area afforded the opportunity for proper social distancing, and with Joan Maxwell, Murphy and Bernhardt positioned at least 6 feet apart, all four removed their masks before approaching the microphone one at a time to field questions.

Bernhardt commented on the reason for his visit and why the Edenton facility was selected.

“The president and Congress worked very hard to pass legislation to help folks get through this critical time, as the president led an effort to slow the spread of this virus,” Bernhardt said, referring to the novel coronavirus, the virus that causes the respiratory disease COVID-19.

The secretary’s visit was an opportunity to see the results of how companies have benefited from stimulus funds provided in the federal government’s $2 trillion Coronavirus Aid, Relief and Economic Security Act, which was approved in late March.

“I had a chance to come here today with the congressman and visit and see the import that was placed on the PPP program that the president worked with Congress to get and see that it’s really helping, it’s really benefiting the American people,” Bernhardt said.

Included in the federal stimulus package are loans provided under the Paycheck Protection Program, which is managed by the U.S. Small Business Administration. Regulator Marine was the beneficiary of a PPP loan, which provided enough funds equal to 2½ times Regulator Marine’s monthly payroll. According to terms of the loan, it will be forgiven if the money is used toward employee salaries.

Bernhardt praised the origins of Regulator Marine as the “quintessential American story.”

“It’s a business that started out as a small business, became a top business in their field and really served an important component, not only in the community but throughout the entire industry,” the secretary said.

Joan Maxwell expressed her gratitude for the PPP loan, which has kept her nearly 190 employees working.

“The PPP program was a great program for us,” she said. “It enabled us to keep people working. We did have a layoff early on but that was before the PPP was announced.”

Maxwell also explained some of the employee safety measures Regulator Marine implemented. She pointed to red X’s on the deck of the maintenance bays that indicate safe places to stand and sit.

“If you’re in breakrooms, when we’re working on the lines, we’re constantly encouraging people and reminding people of how important it is to keep that six feet distance so that we can keep everybody safe,” she said.

“So, we’ve been very careful to take care of our team,” she said.

Maxwell said while Regulator Marine is thankful to be open, the plant did have some layoffs in March, which also led to a reduction in production.

“But we’ve been able to continue to operate here for the last nine weeks,” she said.

Maxwell said a main challenge for the company now is that many of its suppliers have shut down. In response, the company has had to source limited items from several different vendors.

Murphy praised the Maxwells for their efforts keeping a key driver of the local economy up and running.

“They’ve done things the right way. They are abiding by social distancing. They’re wearing masks. They’re doing all the things that have made us flatten the curve very well,” Murphy said, referring to the incidence of COVID-19. “But they’ve done it in a way to keep their people employed and to keep production going.”

Regulator Marine is a good example of why it’s crucial that manufacturers remain open throughout the pandemic, Murphy said.

The congressman called the Maxwells, “paragons of being able to do this the right way.”

Murphy, who’s also a urologist with a practice in Greenville, said he thinks North Carolina is taking the right steps in returning to business as usual.

“I think we’ve learned a lot so far. As a physician I’m able to look at the science and deal with what facts we’ve had and how much we’ve learned and how we’ve been able to move forward,” he said. “I think we’re in a very good path moving forward. I think that our public understands this is a crisis that needs to be taken seriously. I’m hopeful that things will continue to move forward.”

In North Carolina, Gov. Roy Cooper has been a little more cautious to reopen the state as other states have been. While Murphy said he thinks North Carolina businesses could open a bit sooner, he also appreciates the governor’s concerns.

“I’ve looked at the data, I’ve looked at the information that’s finally been made available to us,” Murphy said. “I personally think we could do things a little bit quicker. The governor is in a difficult position. I think there are some things that we can open up somewhat quicker.”

The U.S. Department of Interior manages one in 5 acres of land in the United States, Bernhardt said.

“We are going through a process just like businesses, reopening along with the governors’ requirements,” he said. “We know it varies state by state, but we’re in the process with our own facilities, many of which have been accessible, some of which have been closed, and we’re restoring access to the American people and going forward with our employees and providing recreational opportunities for the American people.”

Bernhardt said his visit aligned with two of his favorite pastimes.

“Here, these are my two things you can’t get better than,” he said. “I’m a boat lover, I’m a fisher, I’m an angler, and the chance to come out and see this facility, meet with people who have been involved and participating in a program that helps America, I think that’s an important thing to do.”